Feature films take a long time to make, and when co-directors Jonathan Dayton and Valerie Faris began work on Battle Of The Sexes, the 2016 US Primaries were just getting under way and there seemed every chance the film would come out in the same year America got its first woman President.

Perfect timing, they must have thought, for a film that celebrates an earlier feminist milestone – the 1973 tennis match between self-styled ‘male chauvinist pig’ Bobby Riggs (a man who publicly opined that women belonged in the kitchen or bedroom but never on the tennis court) and Billie Jean King, the leading female player of her age.

So the fact that it actually comes out with Donald Trump in the White House and Hollywood consumed by sex scandals caused by abusive male film-makers should be a disaster for a film that intended to show just how far the feminist cause has come. 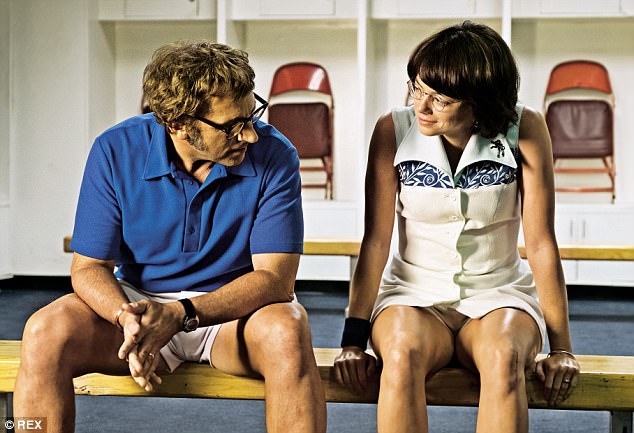 Battle Of The Sexes, about the 1973 tennis match between Bobby Riggs and Billie Jean King (Steve Carell and Emma Stone, above), reveals just how little the feminist cause has advanced

But it’s not. In fact, Battle Of The Sexes has become a film that reveals just how little progress has been made and it’s all the better and more powerful for it. You can certainly see why it’s starting to generate some deserved pre-awards buzz.

That said, it does begin a little slowly, as we are taken back to the sexist Seventies.

It’s a time when new tennis tournaments dared to offer women players one-eighth of the prize money they offered the men and a male sports presenter would think nothing of draping his arm around the shoulders of the young female player he was interviewing. The casual sexism is almost more shocking than the institutionalised variety. 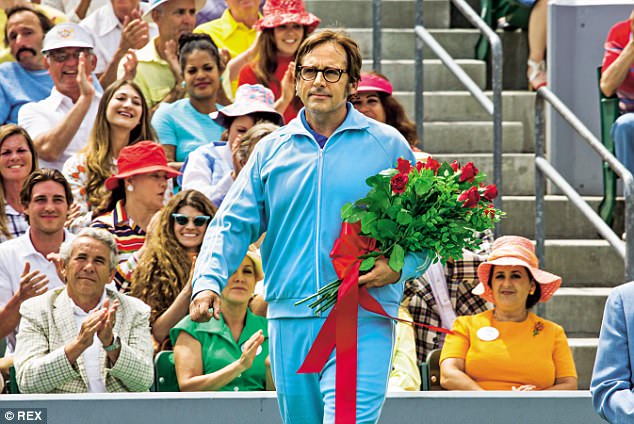 What slowly lifts it from the made-for-TV history lesson it could so easily have become is the quality of the performances. Emma Stone is excellent but Steve Carell is arguably even better

But what slowly lifts it from the made-for-TV history lesson it could so easily have become is the quality of the performances.

Emma Stone, last year’s winner of the Best Actress Oscar, of course, plays King, and is excellent as a woman who, at the age of 29, was just discovering who she was.

King was sick and tired of playing by the men’s rules, particularly those laid down by Jack Kramer (Bill Pullman), portrayed here as a sexist dinosaur who had just set up the Association of Tennis Professionals. 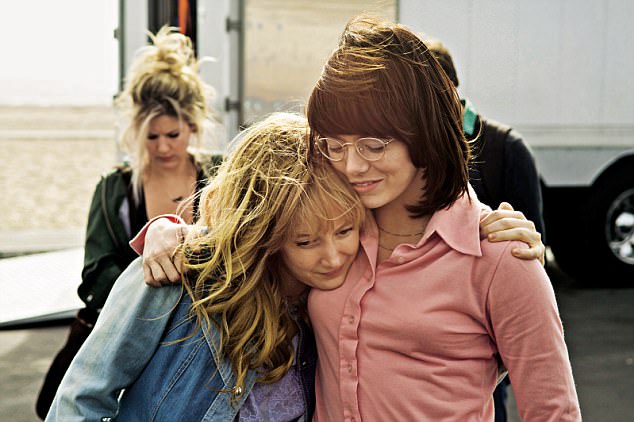 Even as she was transforming women’s tennis, King was also coming to terms with her own sexuality, a battle that helpfully lends this potentially rather dry story some heart

But when it became clear that female players would still be treated as second-class citizens, King – backed by the feisty businesswoman Gladys Heldman (an excellent Sarah Silverman) – promptly established the Women’s Tennis Association, with its own breakaway tour. In true Seventies fashion, it was quickly sponsored by a tobacco company.

But even as she was transforming women’s tennis, King was also coming to terms with her own sexuality, a battle that helpfully lends this potentially rather dry story some heart, emotional depth and even a smattering of sex, as King – seemingly a happily married woman – finds herself attracted to Marilyn Barnett (Andrea Riseborough), a free-spirited Californian hairdresser.

Arguably even better, though, is Steve Carell as Riggs, who has gone down in history as a chauvinist monster but who – courtesy of Carell’s sympathetic performance and Beaufoy’s well-researched screenplay – is entertainingly rehabilitated here. 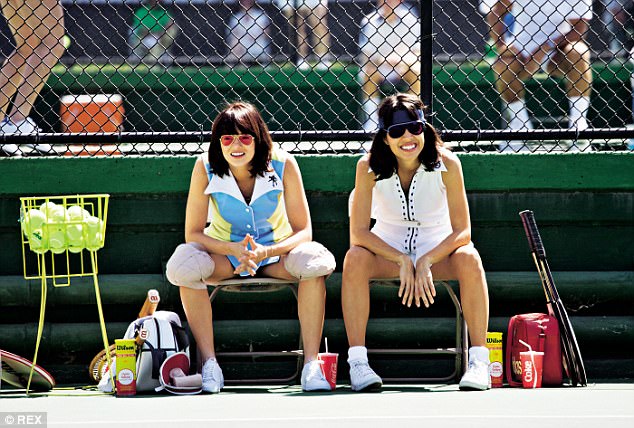 Riggs was a Wimbledon and US Open champion back in the late Thirties and early Forties but also a lifelong gambler with a talent for deal-making and self-promotion.

Did he really believe half the sexist nonsense he spouted? Or was it just ticket-selling, ratings-boosting hype for a tennis match that would eventually attract a TV audience of 90 million? The fact that Riggs and King remained friends afterwards surely provides a strong hint.

Dayton and Faris, who already have Little Miss Sunshine to their name, direct without fuss or cinematic gimmick. 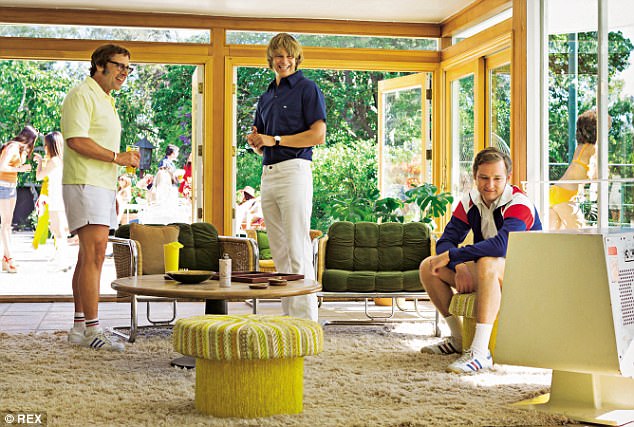 But never pretends that the battles being fought then have gone away, let alone been won. (l-r: Carell, Eric Christian Olsen and Lewis Pullman as Riggs, Lornie Kuhle and Larry Riggs)

The unshowy end result is a thoroughly watchable and thought-provoking picture that evocatively takes you back to the Seventies but never pretends that the battles being fought then have gone away, let alone been won.

There are still arguments about equal prize money at tennis tournaments and there are many who would say that unless there’s a Williams or Sharapova on court, the women’s game has less box-office appeal now than it had then.

So while this early battle may be long over, the war definitely goes on.

There’s something nasty lurking behind the white picket fences of American suburbia; we know that.

And maybe that’s why George Clooney’s Suburbicon, a film set amid the meticulous uniformity of one of those purpose-built new towns created in the Fifties, doesn’t impress more than it does.

We’re just too familiar with the idea and with the heightened, melodramatic Hitchcockian reality in which Clooney – who directs rather than acts – seeks to execute it. 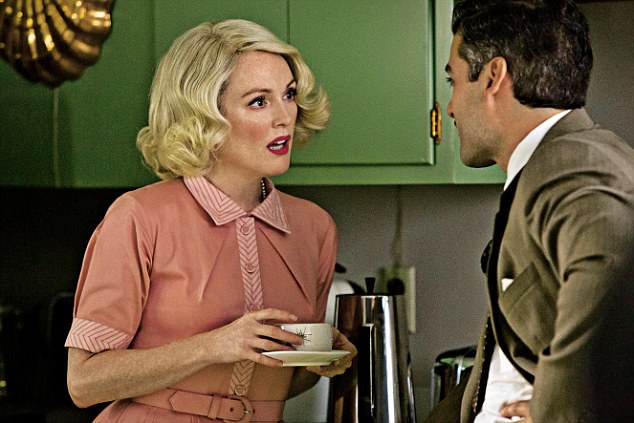 From the moment we realise Julianne Moore (above) is playing two roles, we’re unsettled by Suburbicon and the idea behind George Clooney’s film is just too familiar to really impress

We’re unsettled from the moment we realise Julianne Moore is playing two roles – Rose, who has been in a wheelchair since a car accident and is wife to company man Gardner Lodge (Matt Damon) and mother to Nicky (a rather good Noah Jupe), and Margaret, her able-bodied and more glamorous sister.

Hmm, we think, that’s not going to end happily and, after a violent burglary, it duly doesn’t.

The screenplay is co-written by Joel and Ethan Coen and feels like bits left over from their earlier films.

Here, a familiar blend of infidelity and murder is mixed with a deliberately unpleasant point about endemic racism – as the first black family moves into the neighbourhood and is promptly besieged by furious neighbours.

But it’s the quiet white folk, with their company cars and carefully manicured lawns, who are causing the real problems.

Unexpected treat of the week is Jane, Brett Morgan’s fascinating and moving documentary about the extraordinary primatologist Jane Goodall, who has spent most of her life studying a chimpanzee community in Tanzania.

Her unwavering commitment to the project is impressive but so is Morgan’s good fortune in gaining access to the archive footage shot of Goodall.

There’s something immensely powerful about footage of her walking barefoot through the bush in her 20s being intercut with the quiet wisdom she emanates in a recent interview shot in her 80s.

This is a woman who always knew what she wanted to do and just went out and did it. Wonderful. 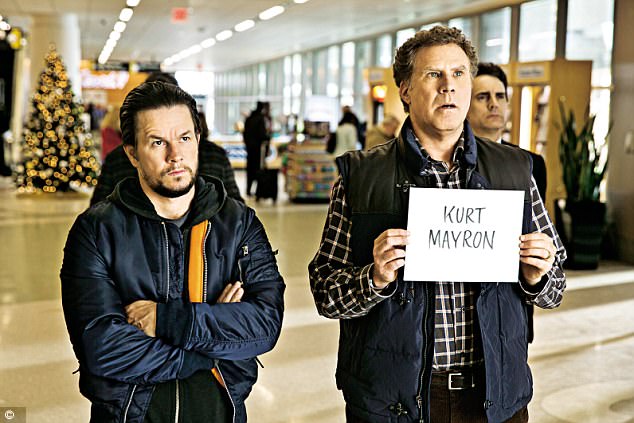 Daddy’s Home 2 sees Mel Gibson and John Lithgow join Mark Wahlberg and Will Ferrell (above) in a seasonally themed sequel. It’s far from straightforward but it will make you laugh

If you’re looking for a crowd-pleasing outing in the run-up to Christmas, you could do a lot worse than Daddy’s Home 2, which sees Mel Gibson and John Lithgow joining the blended family fun for this seasonally themed sequel.

It’s far from straightforward working out which child belongs to which father, especially if you haven’t seen the 2015 original, but if you bear in mind that Linda Cardellini’s Sara was married first to the macho Dusty (Mark Wahlberg) before finding more lasting happiness with the distinctly beta-male Brad (Will Ferrell), then you’re well on the way. You won’t be proud of it but it will make you laugh. 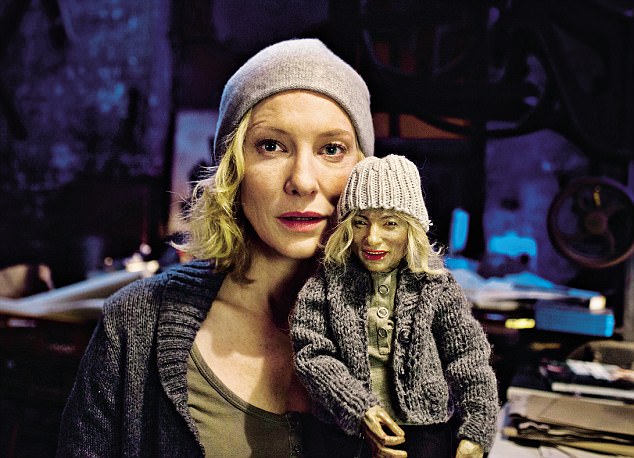 The cinematography and staging are impressive but art-house offering Manifesto, which features Cate Blanchett (above) dressing up as 13 different characters, is a tad tedious

Manifesto is an art-house offering that sees Cate Blanchett dressing up as 13 different characters to spout 13 different artistic and political manifestos.

It’s a tad tedious but there are some funny moments, and both the cinematography and staging are impressive.