Not following Lewandowski out of the door, then? Bayern Munich star Thomas Muller laughs off a fan’s plea to get him to sign for Arsenal… with the German adamant there is NO way he heads to England this summer

Matthijs de Ligt and Sadio Mane scored their first goals for the club in the comfortable win, but it was the club veteran who made the rounds on social media after the match.

Muller denied that he would be joining Mikel Arteta’s side, appearing to laugh at the fan’s questioning quickly dampening any speculation over a move.

When asked if he would join the Gunners, he replied: ‘No, no, no, no!’ 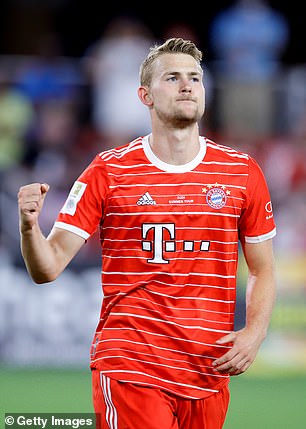 Matthijs de Ligt scored on his debut for the Bavarian giants

Having already lost talismanic forward Robert Lewandowski to Barcelona, it would likely have d to have been a sensational bid for Bayern to be convinced to part with yet another of their veteran forwards.

Debutants Mane and de Ligt ran riot in the US capital as the ten-time Bundesliga champions thrashed Wayne Rooney’s DC United 6-2 in Washington.

De Ligt, who completed his £68m move from Juventus on Tuesday, was also on the scoresheet, finding the net less than two minutes after coming off the bench at halftime.

Manager Julian Nagelsmann praised the pair for how well they’ve both settled into the squad so quickly.

‘Both players have made a good start,’ Nagelsmann said post-match.

Also among the goals was Serge Gnabry, who penned a new deal last weekend to stay in Bavaria until 2026 and was also linked with a return to the Gunners having begun his career there. 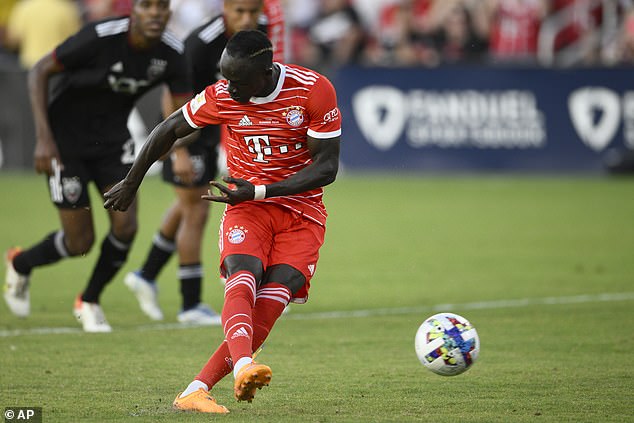