Baylor paid football coach more than $15MILLION AFTER firing him

New tax records show that Baylor University paid former football coach Art Briles more than $15million after firing him in the wake of a sexual assault scandal that rocked his program.

The documents obtained by The Dallas Morning News show that former university President Ken Starr also received more than $4.5million following his resignation in 2016. The dollar figures surfaced in annual required tax filings to the IRS.

Starr left shortly after a scathing review found that under his leadership of the nation’s largest Baptist university, Baylor did little to respond to sexual assault accusations involving members of its vaunted football program.

Briles has since apologized for some ‘bad things that went on under my watch’ but pushed back against some accusations made against him and his program.

The fallen college coach has yet to receive another job in the industry since he was fired.

Former Baylor Head Coach Art Briles was paid more than $15million after he was fired over sex assault scandal. He hasn’t worked as a coach since. Pictured is the coach after the Russell Athletic Bowl game in Orlando in December 2015

The 61-year-old Briles was fired in May 2016 by Baylor after an investigation by a law firm found that over several years the school mishandled numerous sexual assault allegations, including some against football players.

The lawsuit against the university came from a female Baylor graduate who claimed that between 2011 and 2014 a staggering 31 Baylor football players committed at least 52 rapes – including five gang rapes.

The lawsuit described a shocking ‘show ’em a good time’ culture that sold the football program to recruits by using sex.

Underage students were taken to strip clubs where everything was paid for and coaches allegedly sent two female students to have sex with recruits, it claimed.

In May 2017, another lawsuit filed by a ‘Jane Doe’ claimed that Baylor football players gang raped women as part of a ‘bonding experience’. 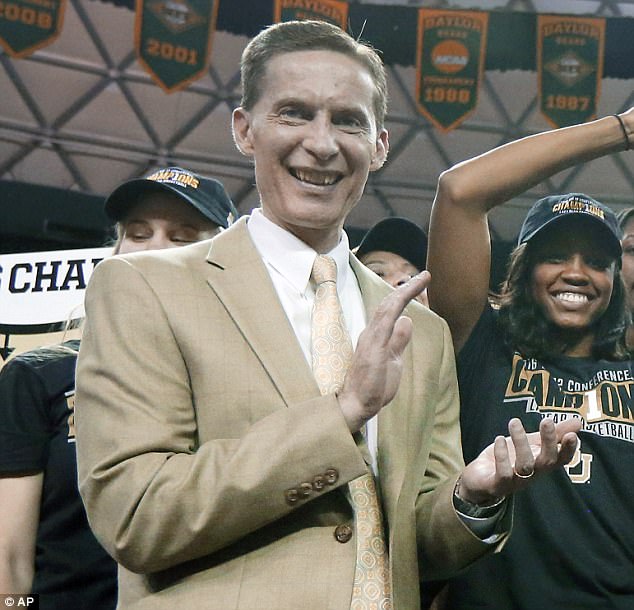 She said she was raped by four to eight Baylor players in February 2012 and attacked the ‘deliberately indifferent response’ of the school authorities.

The lawsuit said that as part of a hazing ritual Baylor players drugged and gang raped women, which was filmed and circulated among players.

Baylor has already settled at least two federal Title IX lawsuits against the school related to sexual assault scandal, including last year when it reached a deal with former student Jasmin Hernandez, who was sexually assaulted by former Baylor player Tevin Elliott in 2012.

Briles had been removed as a defendant in Hernandez’s lawsuit.

The school previously settled with three women who hadn’t sued. The Big 12 Conference is withholding revenue from the school until an independent audit shows the university is implementing dozens of reforms recommended by the Pepper Hamilton law firm 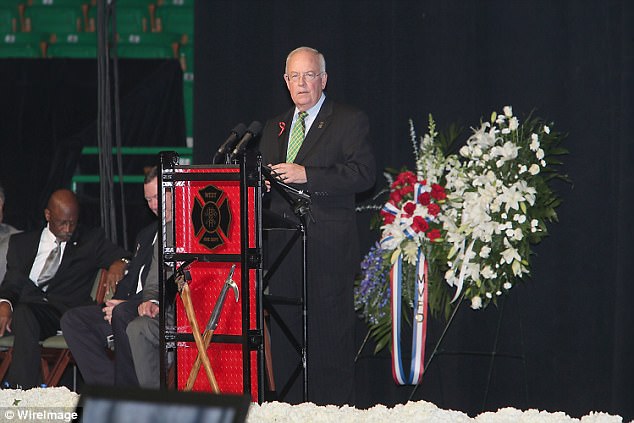 Tiger-Cats coach June Jones, promoted last year from offensive assistant after the team got off to a 0-8 start, was ready to give Briles the opportunity to coach again.

The two have a relationship that goes back years, and their college coaching careers in Texas overlapped with Jones at SMU in Dallas during the time Briles was head coach at Baylor in Waco, Texas.

But after Hamilton tweeted out a news release announcing Briles had been hired as assistant head coach of offense, many people spoke out about the leagues decision to hire someone with ties to sexual assault allegations.

Former NHL star Theo Fleury, who was sexually abused by his junior coach, tweeted: ‘If you knew and didn’t say anything then you are just as much a part of rape as the people who committed rape. Shame on #CFL.’

Barry’s Jewelers, one of the team’s sponsors, also denounced the hiring of Briles.

They said: ‘We strongly condemn and urge the team’s management and ownership to immediately sever any ties they may have.’

‘Mr. Briles may or may not have a valid coaching track record, but to choose the chance of winning football over the importance of values goes beyond our core values and is absolutely not acceptable.’ 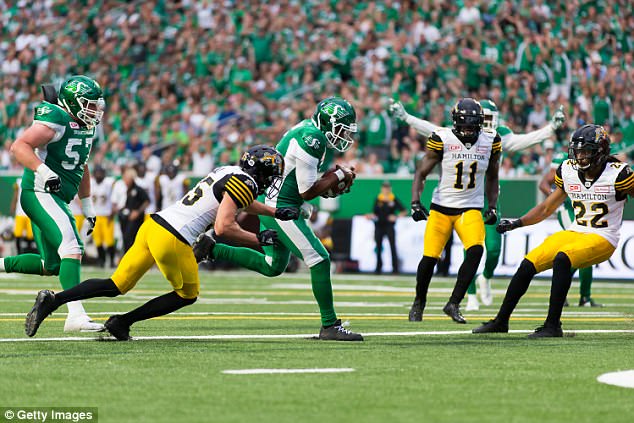 Briles was almost hired on by the Canadian Football League last year. But that deal fell through after people complained over the ‘rape culture’ he promoted at his last job. The Hamilton Tiger-Cats and the Saskatchewan Roughriders in Regina, Canada, in July 2017

Initially, Tiger-Cats CEO Scott Mitchell defended the hiring and said the organization had no intention of taking back the offer.

He said: ‘This is about giving someone a second chance and we’re committed to doing that.’

‘For every reaction that you’re getting from social media and media, there’s a tremendous amount of support behind the scenes for a tough decision. I think a lot of people in this world, including myself, have made bad decisions and have regrets and I certainly feel strongly that in this case, Art Briles deserves a second opportunity,’ he told the 3DownNation blog, according to The Canadian Press.

But later, the CFL released a short statement saying Commissioner Randy Ambrosie was in discussions with the team regarding Briles’s hiring.

And a few hours later, the league and the team released a joint statement saying Briles was out – once again.