Kristen Stewart said the one thing that made her feel ‘disloyal’, while portraying Princess Diana in her new movie Spencer, is that unlike Diana, she’s not a mother herself.

Stewart said she felt the Princess was at her most ‘untouchable’ when she was with her sons, William and Harry.

‘She’s like this feral animal you wouldn’t dare accost,’ she said, of the woman she plays in Pablo Larrain’s film, which imagines three days the Princess spent at Sandringham at Christmas, in the run-up to her separation and eventual divorce from Prince Charles.

Kristen Stewart said the one thing that made her feel ‘disloyal’, while portraying Princess Diana in her new movie Spencer, is that unlike Diana, she’s not a mother herself

Her portrait of the complex character who is still transfixing us 24 years after her death is compelling, though she regretted that ‘I’m not a mum yet’.

She added: ‘I need that to feel authentic.’ It was a recurring theme during our phone interview (she was speaking from her home in Los Angeles). Which gave me an opening (or so I thought) to ask her about motherhood.

At which point, she knocked the wind out of me by declaring that she was . . . pregnant. Before laughing uproariously. 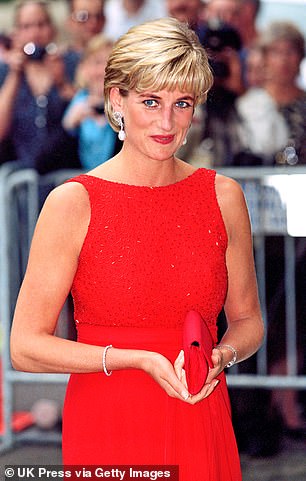 Her portrait of the complex character who is still transfixing us 24 years after her death is compelling, though she regretted that ‘I’m not a mum yet’. Princess Diana is pictured above

Sighing, she continued: ‘It’s the one part of playing her that I felt disloyal about.’

Spencer premiered at the BFI London Film Festival last night, with Stewart and other cast members in attendance. It goes on general release on November 5.

Just last month, I watched the actress disembark gracefully from a water taxi at the Venice Film Festival. Was that new-found poise a legacy of the coaching she got from dialect and etiquette director William Conacher, who worked with her on Spencer?

She agreed that Conacher was a ‘transcendently talented artist’. Over the years, ‘the Diana authority’, as she called him, has worked with all the screen versions, including Naomi Watts in the feature film Diana, and Emma Corrin in The Crown (she ‘loves’ Corrin’s work, she added).

I first met Stewart years ago, at the Sundance Film Festival. I interviewed her — or tried to — but she was so sulky and monosyllabic that I gave up, and said we should resume our conversation in a decade or so, once she’d grown up. Which, I’m glad to note, she has.

She’s also become a heck of an actress. Spencer played well in Venice, though there were a few dissenting voices.

Stewart is well aware of the mixed reaction. ‘I definitely knew that the chances of ‘mucking this up’, as a Brit might say, were far greater than doing a ‘good job’,’ she said.

‘But I thought it was worth it. I’ve been working as an actor for a long time [since the age of nine], and it’s really rare to find things that make you feel this way.’ Getting inside that head, she added, had imbued her with a ‘spooky kind of power’.

When agreeing to the project, Stewart said she’d braced herself for the ‘daunting and exceptionally harrowing experience’ of recreating one of the lowest periods of Diana’s life. But a totally unexpected ‘takeaway’ of the experience was ‘joy’.

She tried to explain. ‘She just really did have this overriding, disarming, beautiful energy.’ The decisions Diana was grappling with were ‘earth-shattering’. And yet ‘inhabiting her made me feel taller, and made me feel I could dance. I felt her power in a f***ing beautiful way’. 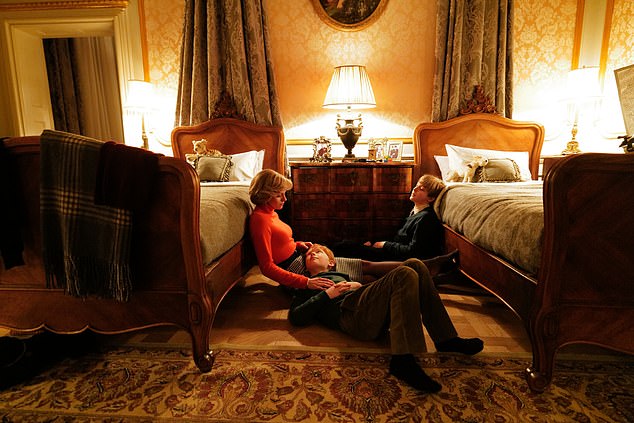 Occasionally on set, if she was feeling ‘self-protective or tight or emotional’, she’d lapse into her own accent. And then, she said, she’d have to walk around going ‘Argh! Argh!’, startling cast and crew, in order to get Diana back

I watched Spencer on a giant screen in Venice (twice!) and I can’t deny that I found Stewart bewitching.

The scenes with the Princes (Jack Nielsen as William, and Freddie Spry as Harry) are tender, and moving.

Stewart said director Larrain wanted the trio to be like ‘a three-headed animal in a bubble’. And to that end she spent time with her young co-stars, so she could at least pretend to be their mother for a few days on set.

Getting the accent right was crucial. She explained: ‘When I’m talking, I barely open my mouth, and everything comes to an end fairly abruptly.’

But the Princess’s voice was ‘buoyant’… and suddenly, down the phone, she switched to ‘breathy’ Diana, and the transformation was remarkable.

Occasionally on set, if she was feeling ‘self-protective or tight or emotional’, she’d lapse into her own accent. And then, she said, she’d have to walk around going ‘Argh! Argh!’, startling cast and crew, in order to get Diana back.

She sees no likeness between her celebrity — even during the Twilight saga years, when she would regularly be pursued by fans — and that of the tragic Princess.

‘I mean, her world opened up to the entire planet,’ she said.

Native neapolitan goes back to his roots 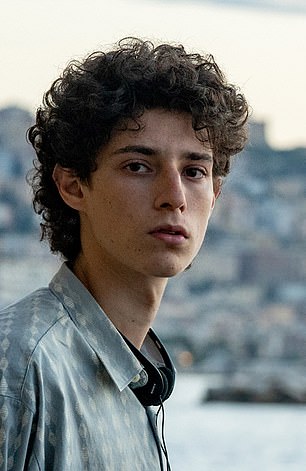 Filippo Scotti, an extraordinary newcomer, plays a character based on the director at 17

Italian filmmaker Paolo Sorrentino was raised in an apartment building just a street away from the hospital where he was born 51 years ago, in Vomero, high above Naples, with views of the bay and Mount Vesuvius.

Sorrentino shot much of his new movie, The Hand Of God, in a flat one floor beneath the one he lived in with his parents and two siblings. The original family home wasn’t available, ‘but it has the same architecture and geometry’, the director told me, when we discussed the coming of age story.

Filippo Scotti, an extraordinary newcomer, plays a character based on the director at 17. A lot of what happens is invented, but there is truth, too; including a tragedy involving his parents which Sorrentino had been reluctant to address. ‘For many years, all this pain was a long interior monologue with myself,’ he told me. ‘But the act of sharing it has been helpful.’

The Hand Of God’s themes are family, Naples, and cinema itself. ‘Family is the first relationship that you have with the world — you believe that the world is your family,’ he said.

And of the city of his birth, he added: ‘The reason so many people live in Naples, by the sea, is because after a while you can have the feeling you’re living an infinite summer; and that real life never starts.’

And cinema? Sorrentino tells me he can remember watching Marlon Brando break a glass on screen, when he was just a baby. He can’t recall the film, but his older sister told him he asked: ‘Why did the man break the glass?’ The director has made a dozen movies, and watched thousands more; and yet at the back of his mind was always the question: ‘Why did Marlon Brando break that glass?!’

I wonder how many aspiring filmmakers will be as inspired by Sorrentino’s The Hand Of God (yes, the title does refer to that Maradona goal) as he was, by the cinema’s great artists?

The film’s being shown at the BFI London Film Festival today, and the National Film Theatre tonight. It will be shown in cinemas from December 3 and on Netflix from December 15. 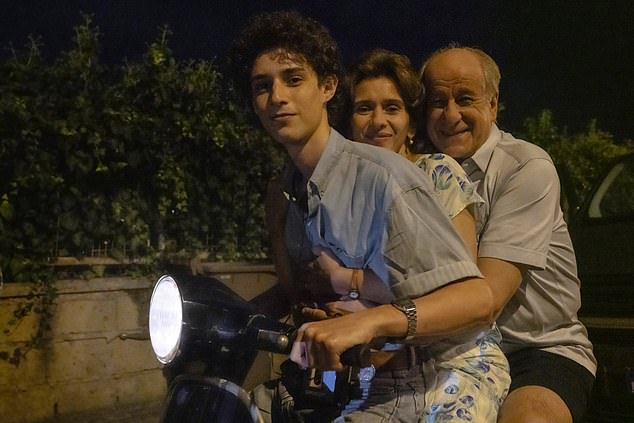 The Hand Of God’s themes are family, Naples, and cinema itself. ‘Family is the first relationship that you have with the world — you believe that the world is your family,’ he said