James Bond will still ‘rise to the occasion’ in the #MeToo era, the owners of the 007 franchise told me.

‘Me Too has influenced our culture, which is a great thing, so of course it’s going to influence everything we do on Bond,’ said Barbara Broccoli.

She controls the Bond pictures with producer and half-brother Michael G. Wilson.

Barbara Broccoli, pictured above with Daniel Craig, said that with the Craig series of Bonds, 007 had evolved into ‘a very complex character; and his relationships are far more complex — so the women have evolved. She is pictured with Daniel Craig above

She and Wilson insist Bond films are always contemporary. Wilson stressed that the series ‘has been embracing Me Too for many Bond films. I don’t think that any of our films would not be acceptable — certainly since Daniel [Craig] started.

‘Over the years, attitudes have changed, and so have the Bond films. The films are representative of the times they’re in.’

Armed and reddy: Cuban-born actress Ana de Armas will help 007 on his travels

But both insisted Bond would remain a full-blooded action hero.

‘He’s a real man, who loved life and women and indulged in good food, and had to rise to the occasion when necessary,’

Wilson said, with a chuckle. ‘That’s the kind of character he is.’

Broccoli added that with the Craig series of Bonds, 007 had evolved into ‘a very complex character; and his relationships are far more complex — so the women have evolved. I think this will be a wonderful fifth film, and a really extraordinary journey for Daniel’.

I asked if it would definitely be Craig’s final Bond adventure. ‘That’s what he’s saying,’ Broccoli shot back. ‘Yes, he’s saying this is his last movie as Bond. Sadly.’

Despite their sadness, she and Wilson still have a film to shoot ‘and we’re not even remotely thinking about what will happen if indeed Daniel hangs up his holster,’ she told me.

‘All we’re doing right now is making this film, and we’re so happy to have him back.’

But what of the day when the search for the new Bond begins? Could the next person to play the world’s most famous secret agent be female?

Broccoli ruled that out emphatically. ‘My response to Bond being played by a woman is, well, he was written as a man.’

She said ‘what we should be doing is creating interesting stories for women, and not just turning men into women; or women into men.

‘I’m very much interested in making films about women, created for women; and not doing some sort of stunt casting by turning Bond into a woman.’

That’s pretty decisive. But what about a black Bond? ‘It would be wide open,’ she said, adding: ‘Everyone went hysterical when Daniel was cast — because he’s blond, would you believe!’

Broccoli and Wilson were talking to me from a balcony at GoldenEye, Bond creator Ian Fleming’s picturesque home in Jamaica where Bond 25 has been shooting with director Cary Joji Fukunaga and a cast that includes regulars Ralph Fiennes, Naomie Harris, Rory Kinnear, Lea Seydoux, Ben Whishaw and Jeffrey Wright.

Oscar-winning actor Rami Malek, who will be the villain of the piece, promised a tough time of it for 007. Dali Benssalah, David Dencik and Billy Magnussen will also star in the as yet untitled film.

British-born actress Lashana Lynch, who made her mark in Fast Girls and Captain Marvel, has been cast in the role of Nomi, which Broccoli described as ‘very key to the story’.

She added that Cuban-born actress Ana de Armas would also appear; playing a character called Paloma ‘who helps Bond through part of the journey’, across locations including Jamaica, Norway, Italy and London.

Broccoli said the women were not playing ‘objects’; rather ‘they’re very interesting and competitive women’.

She said some people ‘still like to be called Bond girls; we refer to them as Bond women. They’re characters in a movie, they’re actresses. Some of the actresses still like to be referred to as ‘The Bond Girl’,’ she said with a hearty laugh.

‘I think as we get older they like the Bond Girl moniker. I think when they’re young, they don’t like it so much.’ She refused to name names. 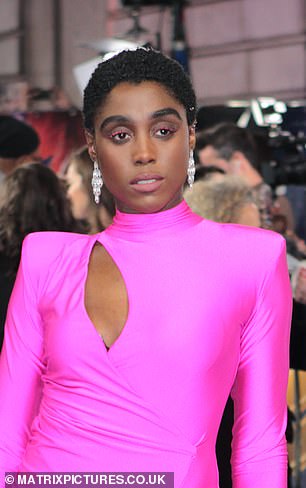 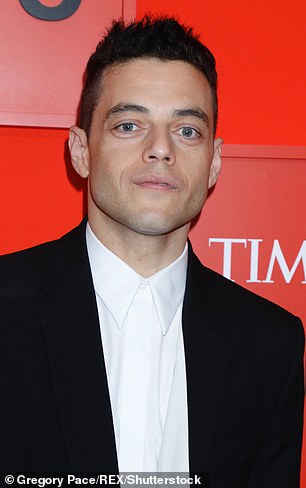 British-born actress Lashana Lynch, left, who made her mark in Fast Girls and Captain Marvel, has been cast in the role of Nomi, which Broccoli described as ‘very key to the story’. Oscar-winning actor Rami Malek will be the villain of the piece

They described Cubby as ‘the greatest teacher in the world’; a man who believed in ‘giving the audience the ride of their life, and putting all the money on the screen’.

Wilson added that another of Cubby’s maxims was: ‘Don’t screw it up.’

Broccoli interrupted, saying: ‘He said ‘Don’t let THEM screw it up!’ You’ve got to take risks and make changes. But don’t let others screw it up for you.’

I asked what happened after they initially hired Danny Boyle — then parted ways with him.

Broccoli praised the Oscar-winning filmmaker but said ‘we all just decided that this collaboration wasn’t working, and it was a unanimous decision.

‘We parted very respectfully and happily. Sometimes you just have to do that.’

She did confirm, however, that Killing Eve and Fleabag writer Phoebe Waller-Bridge had been hired, at Craig’s behest, to ‘add a layer to the script’. ‘We’re throwing everything we have at Bond in this movie. He’s really going to have a rough ride.’

And then, with a laugh, she added: ‘We needed all the help we could get.’