Hugging the hillside, and illuminating all around with an eerie glow, this was certainly a rainbow to remember.

The amateur photographer who captured it on film says he has been asked repeatedly whether the image has been enhanced with computer software – but insists he wouldn’t know where to begin.

John Caine, who runs a bed and breakfast by the placid waters of Tal-y-llyn Lake at the foot of Cadair Idris in Gwynedd, Wales, said the multi-coloured arch of light appeared after a sudden burst of heavy rain on March 16.

This was certainly a rainbow to remember by Tal-y-llyn Lake at the foot of Cadair Idris in Gwynedd, Wales

The 64-year-old always keeps his camera to hand to capture the ever-changing weather at the beauty spot.

Mr Caine, who co-owns the The Old Rectory On The Lake B&B with 42-year-old chef Ricky Francis, said: ‘I have never seen anything like it before, the colours of the rainbow are so vivid and it sits perfectly on the hillside – it looks like the hill is glowing.

‘I’ve had quite a few comments from people saying it looks like it has been photoshopped but it hasn’t been touched up at all.

‘I’m a keen photographer but I wouldn’t even know where to start with Photoshop.

‘There was a sudden heavy shower and then it stopped and the instantly sun came out so I knew to expect a rainbow. Luckily I always keep my camera handy so I can quickly run out.

‘And there it was, it was just magical. We are so lucky to be here all the time, it is such a beautiful place.’ 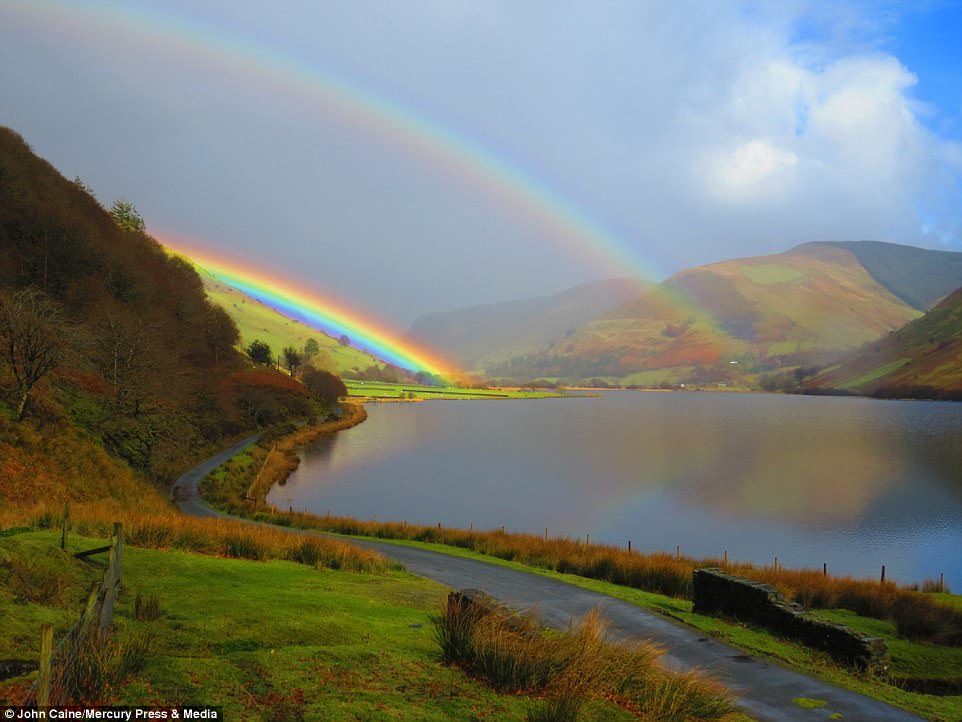 John Caine, 64, said the arch of light appeared after a burst of heavy rain on March 16

He added: ‘It is so lovely when people arrive at the B&B in the dark and when you hear them wake up and open the blinds in the morning they are just going ‘wow’.

‘The lake is ever-changing. I take quite a lot of video to show how quickly the weather can change but it is always so stunning.

‘I have had a few of my photos framed and the printers have asked which way up they’re supposed to be because the reflections in the lake are so clear.’

After years of dreaming about owning their own B&B, Mr Caine and Mr Francis discovered the rectory 13 years ago and fell in love with its stunning setting.

The duo have transformed the building into a luxury four-bedroom B&B with a stellar reputation thanks to Mr Francis’ cooking and Mr Caine’s front of house manner.