The BBC has written to Prince Harry to apologise for not warning him before showing a picture of him with a gun to his head.

The image of the Duke of Sussex branding him a ‘race traitor’ was broadcast in December 2018 after it was shared online in far-right chatrooms by neo-Nazis.

Prince Harry complained to Ofcom which rejected his objection and ruled the use of the image – which was widespread throughout the media – was justified because it was in the public interest to highlight the online activities of extremists.

The BBC has now written to Harry defending the importance of the piece, which aired on the News at 10, but admitting it should have warned the Royal.

The image was created by Michal Szewczuk, 19, who was detained in June for encouraging terrorism.

A BBC source said: ‘The image of the Duke of Sussex was included to show the abhorrent nature of their behaviour and Ofcom has subsequently concluded that there was a clear editorial rationale for using the image which, in the context of the news report, was considered unlikely to incite crime.

‘Naturally we regret the distress caused and we apologised for failing to warn Kensington Palace in advance that it was to be published.’

After its ruling, a spokesperson for Ofsted said: ‘This image was highly offensive, but in our opinion, its inclusion in the article was editorially justified as it was used to condemn and illustrate the racist group’s activities, which was in the public interest.’ 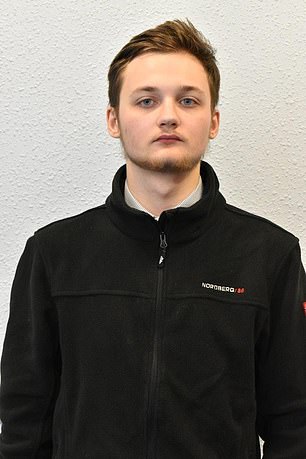 The image was created by Michal Szewczuk, 19, pictured, who was detained in June for encouraging terrorism

Szewczuk was sentenced alongside Oskar Dunn-Zoczorowski, 18, who belonged to a hate group calling itself Sonnenkrieg Division.

The group described itself as the ‘third generation’ of proscribed terror group National Action, whom Szewczuk joined as a schoolboy.

In his complaint, Prince Harry said the image raised ‘serious security concerns’ and ’caused his family great distress’, particularly his wife Meghan Markle, who was five months pregnant at the time.

An internal investigation by the BBC also rejected the complaint, but bosses said: ‘Before publishing seriously offensive material we need to be vigilant in balancing the impact on individuals against the wider good which may be served by publication.’

A spokesperson for the prince said he ‘welcomed the letter’ but added he still disagrees with the decision to broadcast the image.

The spokesperson said: ‘His Royal Highness maintains that instead of reproducing the image and giving a platform to something that would have only been seen by a few, it should have been described so that others would not potentially be influenced by such an inflammatory image.’