It was presented as a ‘dramatised’ natural history series exploring the lives of cheetahs, zebras, elephants, wild dogs and other animals on the Serengeti.

But some BBC viewers were less than impressed with the outcome, and have even mocked the series as a wildlife ‘Made in Chelsea’ for using computer technology to move the plot forward.

And now it has emerged that a scene showing a baby Zebra struggling through crocodile-infested waters is in fact a ‘composite’ of two or more clips shoved together, reports the Sunday Times. 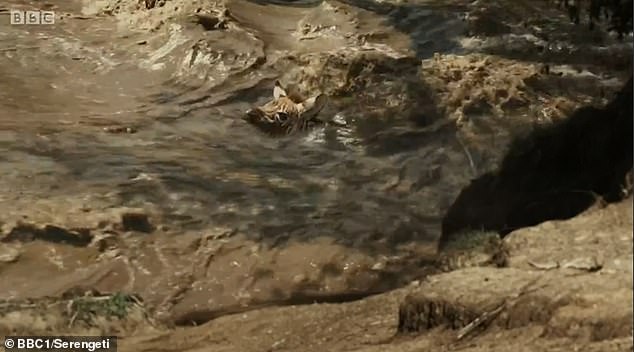 Bafta and Emmy award-winning cameraman Doug Allan, who has worked on series including Frozen Planet, said that although the water and zebra in this clip are real, whether the zebra was in this particular bit of water is not clear 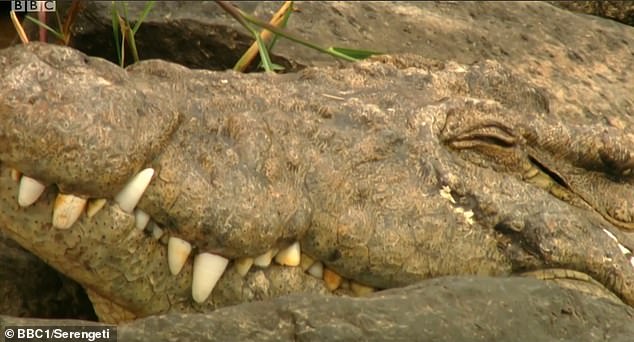 There are also scenes of a crocodile snapping its jaws at a zebra in the series Serengeti which was made for the BBC by XIX entertainment and John Downer Productions. It was first shown last month on BBC One

Shown in Episode Four, ‘Misfortune’, the young Zebra is seen desperately swimming through a rushing river right next to a large crocodile.

It struggles to keep up with its group and, in a second scene, is swept away by the raging current – or was it?

Bafta and Emmy award-winning cameraman Doug Allan, who worked on shows such as Frozen Planet, said that: ‘The water is real. The zebra is real and the zebra did really get carried down the stream – you can see that from other footage.

‘But whether the zebra was in that particular bit of water as seen on screen, who knows. They could be in different places at different times.’

Viewers have mocked the edited clip on social media with one, Randy H, commenting on twitter: ‘Am I crazy or did they actually just CGI a zebra into those rapids? What the hell?!’

Another, FauxCapper, said: ‘Did Discovery straight up fake an ‘almost’ croc attack? That looked suspiciously fake as all hell.’

And a third, ole ‘satthewheel, said: ‘Am I the only one hwo thinks that little Zebra looked edited to being taken with the current?’ 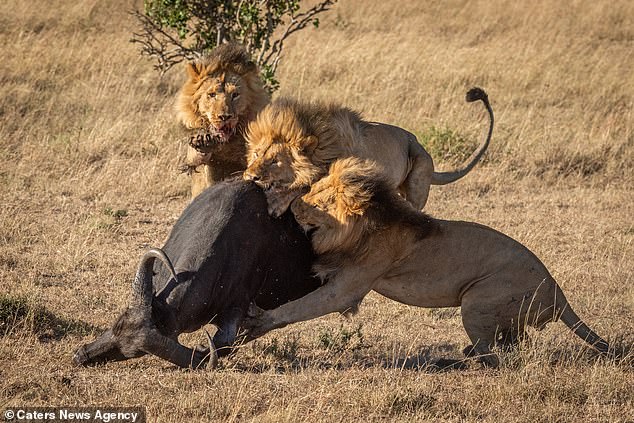 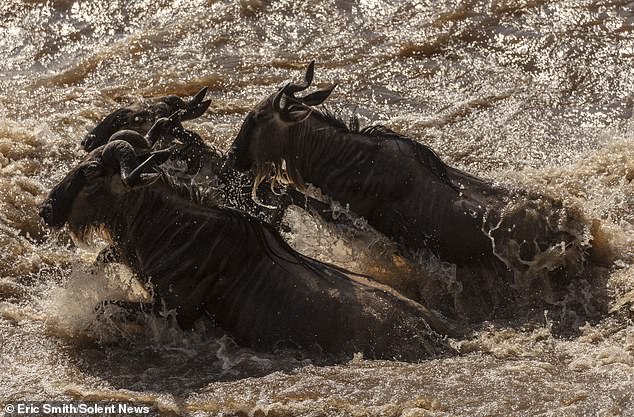 A group of wildebeest struggling through a river in the Serengeti in the series. It was shown last month

Yet another viewer accused the BBC of ‘throwing all dignity over board’ by showing the series.

‘Never thought I would see CGI on BBC,’ they quipped, ‘I won’t continue watching this production. Much as I love nature, I hate fake drama’.

In a statement from the series director, John Downer, who made the series for the BBC and Discovery channel with XIX entertainment, he admitted that some footage had been ‘enhanced’ by previously shot material.

‘This was to build a clear and dramatic narrative that reflects the lives of the animals of the Serengeti,’ he said.

‘No animals were created using CGI but, occasionally, compositing techniques, which combine real footage, have been used to help the narrative and the dramatic flow of the scenes.’

The BBC said in a statement today: ‘We have been clear and up front that Serengeti is a dramatised series and this includes making use of common drama techniques.

‘We believe that the BBC audience can differentiate between ‘documentary’ and ‘dramatised’ natural history.

‘No animals were created using CGI but occasionally compositing techniques, which combines real footage, is used to help the narrative and the dramatic flow of scenes.’ 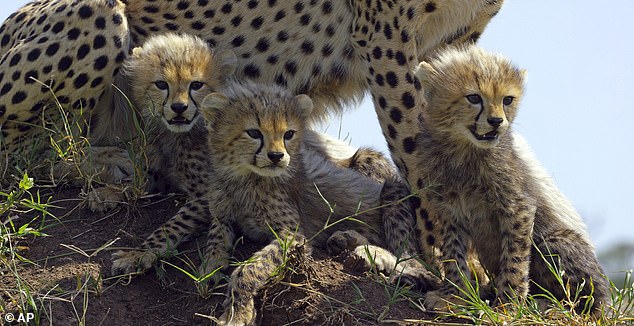 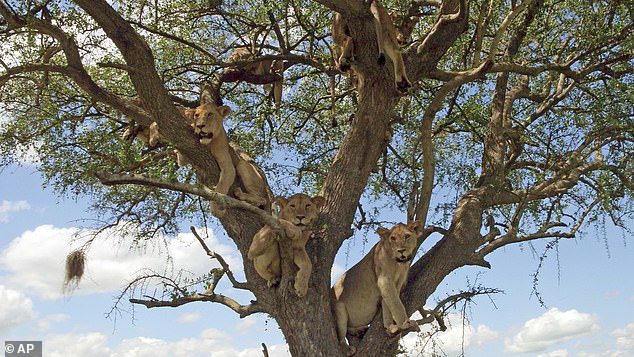 A pride of lions are seen relaxing in a tree on the Serengeti. The BBC has been hit with a new fakery row as it emerged that the clip of a zebra getting swept away by a river may be a fake 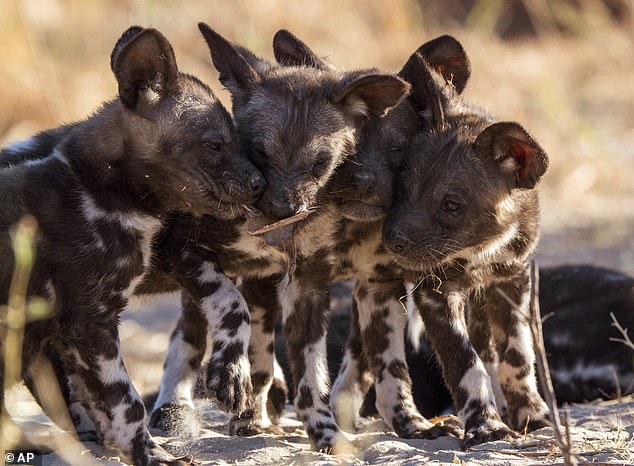 This group of Wild Dog pups were also shown in the Serengeti series, episode four, which premiered on the Discovery channel this month

The series was hit by another storm of criticism the day after it launched in July, with viewers attacking the ‘ridiculous’ and ‘made-up’ story lines.

One irate watcher, Rob Stowers, wrote on Twitter: ‘Always happy to see African wildlife footage but utterly ridiculous made-up stories are completely and utterly unnecessary. This is playschool does wildlife.’

He wasn’t the only person to slam the new show, with another viewer, Lionwolf Lou, criticising the show for using the same name on several animals.

They said: ‘Watching Serengeti. Can already tell this dramatised approach is going to annoy me. About five lionesses have been called ‘Kali’ so far.

While another said: ‘Please stop trying to tell us the lions are little furry people. Enough with the kindergarten narration, we’re adults.’

And another wrote: ‘It’s the Serengeti so why the over the top treatment? It’s a beautiful place not an EastEnders episode.’