George Osborne has accused the BBC of being ‘imperial in its ambitions’ as he warned it faces huge cuts.

The Chancellor launched a stinging attack yesterday on the Corporation’s well-funded website, saying it was creating unfair competition to the free press.

He said bbc.co.uk was publishing so much content that it risked ‘crowding out’ daily newspapers, adding that this showed the BBC wanted to become a ‘national newspaper as well as a national broadcaster’.

Mr Osborne also said it was time for the BBC to contribute to money-saving efforts. He is expected to use Wednesday’s Budget to force the Corporation to meet the cost of free TV licences for the over-75s.

This would cost the BBC £650million – around a fifth of its annual income.

Appearing on BBC1’s Andrew Marr Show, he said: ‘The BBC is a publicly-funded public institution. It does need to make savings as we get our house in order. We are in discussions with the BBC, and I am absolutely sure that they can make a contribution.’

Last night former BBC chairman Sir Christopher Bland slammed the Chancellor’s remarks, saying: ‘If he wants to cut the BBC down in size, he should not use dodgy accounting to mask what is going on here.’

There are understood to be concerns in Government about the scope of the BBC website, which provides local news pages that compete with struggling local newspapers. It also extends its reach globally through dedicated news websites for countries such as Australia.

He said many newspapers risked becoming online-only in the next ten years and therefore the BBC website’s huge scope would make it ‘effectively become the national newspaper as well as the national broadcaster’.

He added: ‘You wouldn’t want the BBC to completely crowd out national newspapers. If you look at the BBC website it is a good product but it is becoming a bit more imperial in its ambitions.’

Last week, the Corporation announced it was cutting more than 1,000 jobs because of a £150million shortfall in its licence fee income. But Mr Osborne dismissed concerns that forcing the BBC to make millions of pounds of savings would force the closure of stations.

Andrew Bridgen, Conservative MP for North West Leicestershire, said: ‘The BBC has had its jackboot on the neck of local papers for far too long.

‘Given its unique taxpayer funding, it tries to do too many things at once, and is therefore able to park its tanks on everybody’s lawn and stifle potential competition.’

Tory MP Philip Davies, who is on the Commons culture committee, said Mr Osborne was ‘completely right’, adding that the BBC ‘is abusing its monopoly… of news and entertainment provision across the country’. 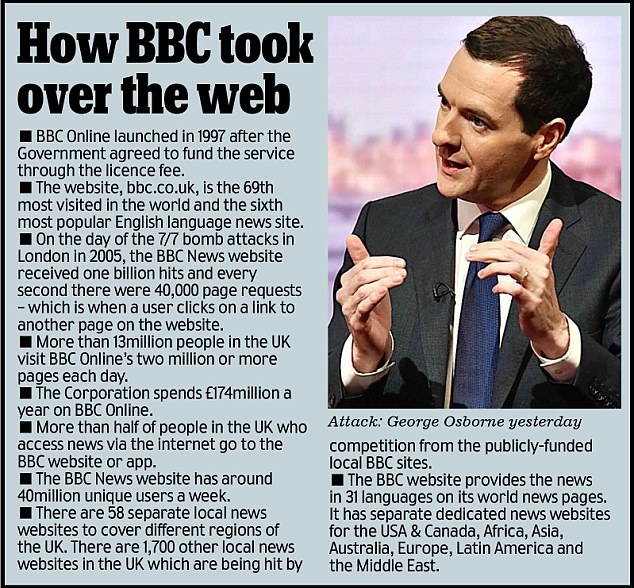 Funding will be provided to help thousands of children in local authority care to be adopted by new parents, it will be announced today.

George Osborne will say it is ‘tragedy’ that so many children ready for adoption are forced to wait months or years to join a loving home.

He will provide £30million to councils in this week’s Budget, to ‘tear down the barriers’ and accelerate the process for 3,000 children waiting to be adopted.

More than half have been in care for at least 18 months while a new family is found, despite a national surplus of potential adoptive parents.

The money will used to waive the £27,000 fee that local authorities must pay to adoption agencies for finding, assessing and matching an adoptive parent and child outside their catchment area.

Mr Osborne will say: ‘We cannot sit by when so many children are waiting so long to find a stable, loving home, particularly when there are parents out there who want to adopt.’

The average time it takes to place a child is falling but David Cameron said that the funding should help ‘ensure it falls further’.

Benefits cap to be cut to £20k

Families in most of the country will have their annual benefits capped at £20,000, the Chancellor has confirmed.

George Osborne had already announced that the annual cap will be reduced from £26,000 to £23,000 across the UK. But yesterday he confirmed reports in the Daily Mail last week that it will be cut further outside London and the South East where the cost of property is lower.

The Chancellor said it was ‘unfair’ to have a system where people on benefits received more than those in low-paid jobs. Reducing the cap will affect another 90,000 households but there will be exemptions for pensioners and those eligible for disability living allowance.