The CEO of Heathrow Airport agreed to meet BBC journalist Frank Gardner today after staff ‘lost his wheelchair’ and left him stranded on his plane for nearly two hours.

Gardner said yesterday the failure of ground staff to bring his wheelchair to him after his plane landed from Ethiopia amounted to a breach of his human rights, branding it a ‘disgrace’.

Despite staff being given instructions to take the chair to him from the hold, Gardner – who was left paralysed after Al Qaeda sympathisers shot him in Saudi Arabia in 2004 – says they took it into the terminal and it was not brought back to him for an hour and 40 minutes.

‘If you can’t walk and your wheelchair’s been taken away into the terminal, that is your legs gone,’ he said.

‘That is your mobility gone. It’s a basic human right. I am pretty seething about it.’

The journalist began expressing outrage at his ordeal in a series of tweets posted from the plane after his Ethiopian Airlines flight landed yesterday morning. But today he announced the airport’s CEO John Holland-Kaye met him to discuss his grievances.

He described his meeting with Mr Holland-Kaye as ‘one of the most productive of my life’.

Writing about it on Twitter, the journalist described their talk as ‘1 of the most constructive hrs of my life! [sic]’ 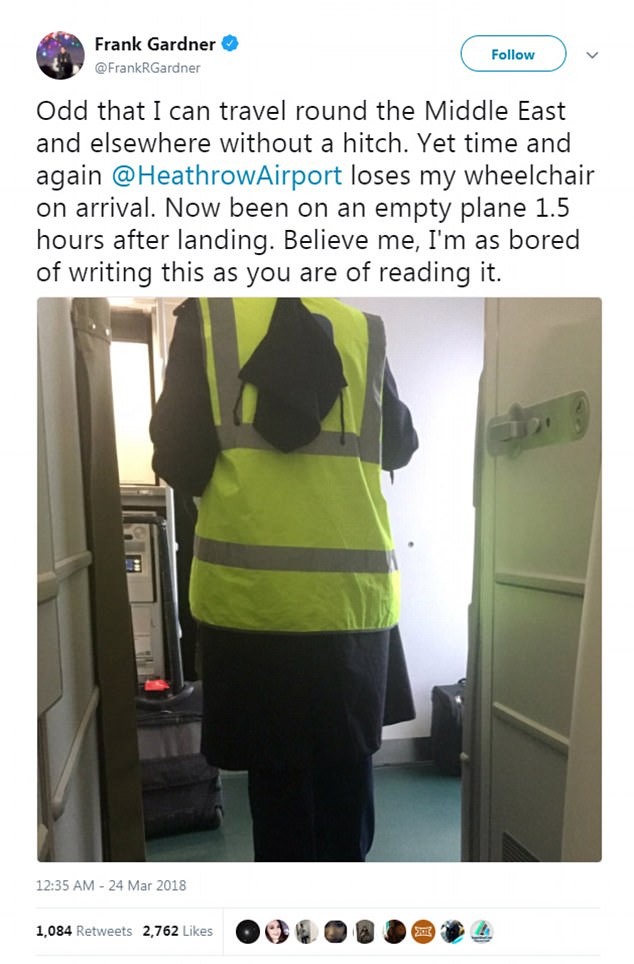 He wrote: ‘Just spent (hopefully) 1 of most constructive hrs of my life!

‘Heathrow CEO took notes as we went thru disabled passengers’ probs at airports.

‘We covered hi-lift failing to turn up, wchairs getting taken off into terminal + more thoughtful attitudes needed twds disabled.’

He added he was ‘grateful for him listening patiently’ about the experiences of disabled flyers at the airport and had identified ‘three areas for improvement’.

They said they discussed better information sharing between the airport and airlines, simplifying the wheelchair reservation system and additional training for staff.

The spokesman added the airport was ‘very glad’ to have had the opportunity to discuss such an important issue.

Expressing his frustration on Twitter yesterday, he said: ‘I am so utterly sick of Heathrow Airport ground staff ‘losing’ my wheelchair.

Over 70 minutes after landing back from Ethiopia I’m still stuck on an empty plane while they try to find it. Just when is the UK’s premier airport going to stop treating disabled passengers this way.’

In another message, he said he had been left stranded at Heathrow before.

He wrote: ‘Odd that I can travel around the Middle East and elsewhere without a hitch. Yet time and again Heathrow Airport loses my wheelchair on arrival.’

When the airport tweeted an apology, a furious Gardner replied: ‘Apology not accepted. You do this nearly every time.

‘You create a case number then it happens again the next time.’

In a subsequent interview with BBC Radio 4’s Today programme, he absolved the airline from blame, pointing out that he had checked that the carrier had left specific instructions for it to be brought into the plane.

He said: ‘Ultimately the buck stops with the airport. The airline transports the wheelchair.

‘They give specific instructions – which I checked that they’d done –to make sure it comes up to the door… But then ground staff, as they often do, decide to go and take it off to the terminal. Why?’ 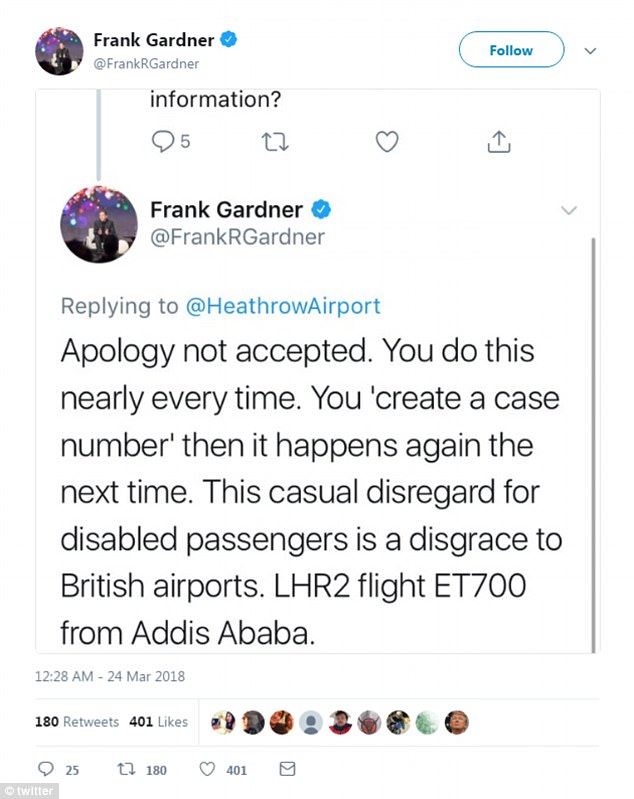 But he told The Mail on Sunday: ‘I am not interested in personal apologies. What I am interested in is action on behalf of other people in a similar situation. It’s got to stop.’

A spokesman for Heathrow last night said airlines and ‘their ground staff’ would be reminded of their obligations to disabled passengers.

Meanwhile, the Equality and Human Rights Commission said it would write to Heathrow to make sure the airport had proper procedures in place for dealing with disabled passengers.

Chief executive Rebecca Hilsenrath said: ‘Time and again this happens to Frank and other disabled passengers at Heathrow. It is not acceptable.’

Disabled passengers yesterday took to Twitter to offer their support. One wrote: ‘Sympathise with Frank Gardner. Countless times this has happened 2us [sic]. Stuck on plane, waiting for W/C.’ 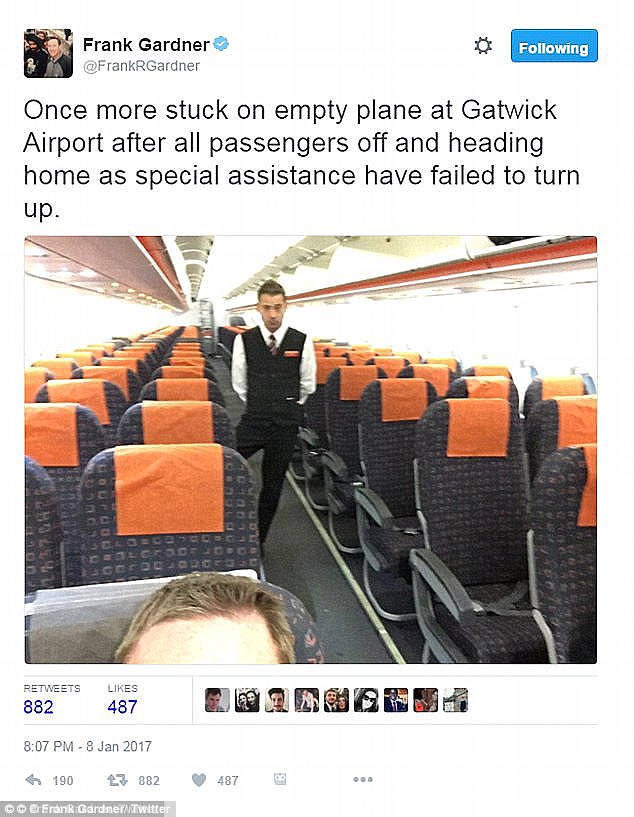 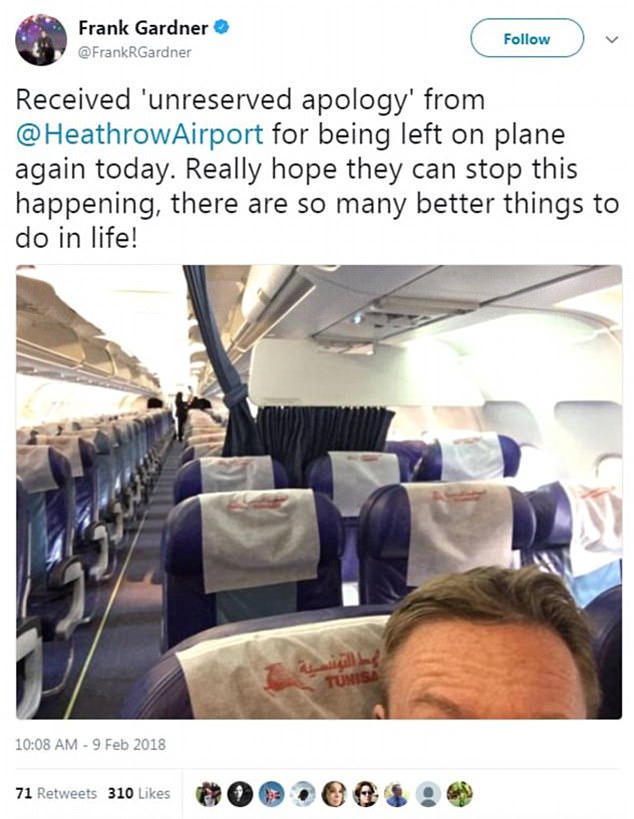 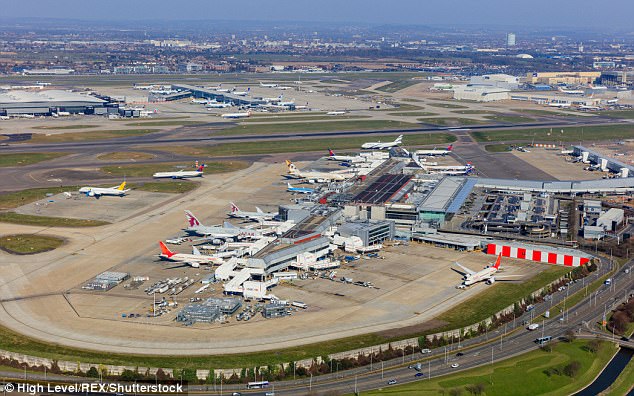 Today he announced the airport’s (pictured) CEO John Holland-Kaye met him to discuss his grievances.