The BBC is pledging a £100million advertising campaign to lure younger viewers and listeners after it axed free TV licences for the over 75s.

The money, equivalent to almost 650,000 TV licences and more than Radio 4’s annual budget, will likely be spent on social media adverts.

The generational shift comes after the corporation stripped free licences for 3.75million people over the age of 75.

But the BBC is wary of the exodus of younger viewers to streaming services such as Netflix and Amazon Prime.

Bosses believe the only way of shoring up a younger viewership is by advertising content through alternative means, such as social media, according to The Times.

Among all adults in the UK, 78 per cent watch the BBC weekly.

Due to the dwindling viewership among young people, traditional advertising hosted for free on the BBC’s platforms will not reach the target market.

The tender document says: ‘New digital behaviours, particularly for younger audiences, mean that it is becoming increasingly challenging to reach young audiences solely through promotion on our owned media channels.’

The £100million contract will be spread over four years and the BBC is currently searching for a media agency to run it. 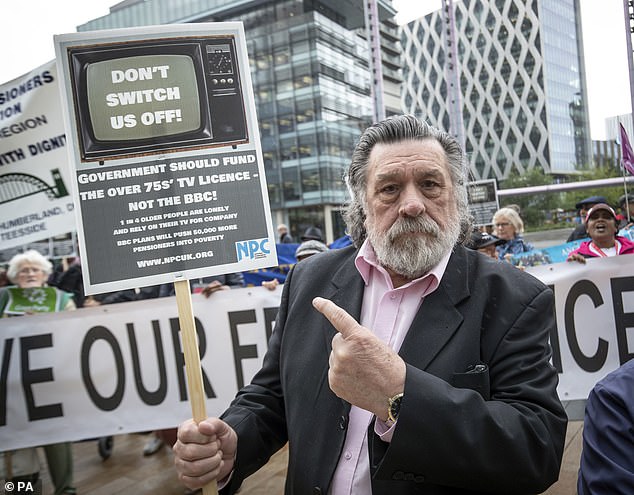 It comes after the corporation stripped free licences for 3.75million people over the age of 75, attracting a great deal of criticism. Pictured is Ricky Tomlinson protesting outside the BBC Media City in Salford

It is a significant hike on the current contract estimated to be between £13million and £15million a year.

The contract is due to start in January after the existing deal with media-buying agency Havas expires.

A BBC spokesperson said: ‘It is becoming increasingly challenging to reach some audiences — particularly younger people — solely through promotion on the BBC, so some paid-for media is necessary.

‘All media-buying is done with best value for the licence-fee-payer in mind, and the BBC spends significantly less on external promotion than other broadcasters.’