A BBC presenter who said British gardening has ‘racism baked into its DNA’ has received a torrent of abuse, including death threats.

James Wong, 39, is a botanist, garden designer and has presented Countryfile on BBC One.

He caused a stir last week when he responded to someone on Twitter who shared an article the presenter wrote for The Guardian which asked why horticulture was not more political.

‘It’s so integral that when you point out its existence, people assume you are against gardening, not racism.

‘Epitomised, for example, by the fetishisation (and wild misuse) of words like ‘heritage’ and ‘native’.’

James Wong (pictured) claims he has reported hundreds of ‘overtly racist and homophobic’ messages to the police, including death threats 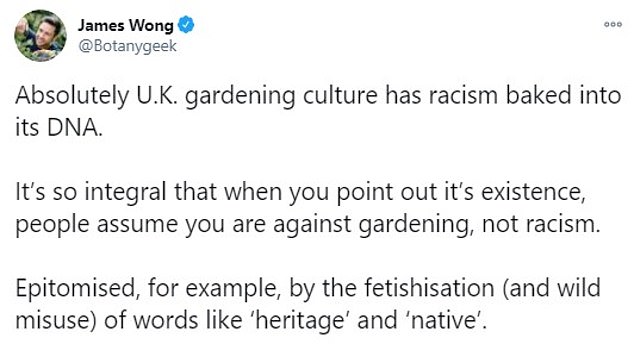 He also claimed that wildflowers being ‘more in keeping with the area’ was historically ‘f*****’ because it is ‘predicated on often unconscious ideas of what and who does and does not “belong” in the UK’.

The presenter immediately faced a backlash online and has reported hundreds of ‘overtly racist and homophobic’ messages to the police, including death threats.

But the presenter has doubled-down on his views and claims to have received a ‘far greater number of supportive messages’.

Speaking to The Times, he said he ‘100 per cent’ stood by his comments.

He added: ‘There has been a surprising amount of misrepresentation of what I actually wrote, such as Twitter headlines claiming I believe ‘begonias are racist’, which is of course a ridiculous suggestion. ‘The first thing to make really clear is that neither gardens nor gardening are inherently racist. This isn’t something I said. Not even remotely.

‘My comments were that the culture of gardening in the UK has an endemic problem with racism.’

The presenter added that in 15 years of working in the horticultural industry he had ‘experienced both tacit, perhaps unconscious, racism and also extremely blatant racism, which I have come to accept as part of everyday reality’. 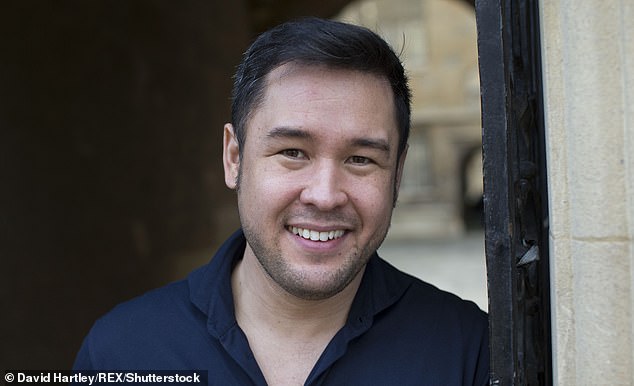 The presenter added that in 15 years of working in the horticultural industry he had ‘experienced both tacit, perhaps unconscious, racism’

Mr Wong was trained at Kew Gardens and works on Gardeners’ Question Time on Radio 4.

He has been backed both by Kew Gardens and the Royal Horticultural Society (RHS).

The RHS said: ‘We are encouraged that James Wong has helped spark conversation around an issue that is part of a bigger piece linked to a distinct lack of ethnic diversity in horticulture. We are proud to call James an RHS ambassador … we applaud him for being vocal on issues which are based on his own personal experiences; however, we are appalled at the nature of some of the abuse James has received.’

Kew Gardens said: ‘We’re proud of our ambassador for opening up conversations about horticulture and race. We know we also have a lot of work to do in this area and we’re committed to examining our history and current practices.’