A BBC presenter has spoken out about a former DJ as the ‘Jimmy Savile of trolling’.

Despite multiple complaints to the public corporation, Ms Green has claimed that the BBC did nothing about Belfield until he began targeting Mr Vine.

Last month Belfield was jailed for five years and 26 weeks at Nottingham Crown Court, after he was found guilty of waging a ‘relentless’ online campaign against broadcasters including Jeremy Vine, who was subjected to ‘an avalanche of hatred’.

The court heard that Mr Vine had received 5,000 to 10,000 hateful Tweets after Belfield directed hateful comments at him.

Alex Belfield pictured ahead of his sentencing in September. The former BBC DJ was sentenced to five years and 26 weeks at Nottingham Crown Court for his relentless stalking campaign on broadcasters and journalists

She told the Sun: ‘Belfield has been harassing me and colleagues for years and got away with it. But when Jeremy was stalked it was suddenly treated very seriously.

‘I don’t hold it against Jeremy, because he has supported us all the way.

‘I am certain Belfield wouldn’t have taken it so far if the BBC took action against him right at the start.’

The local radio presenter said his toxic trolling led to her being prescribed anti-depressants after the ongoing harassment led her to have suicidal thoughts.

Ms Green said that she was called ‘ugly’, ‘old’, ‘boring’ and a ‘transvestite’ by the former BBC DJ who she worked with for a brief period at BBC Radio Leeds.

Belfield had been employed on a temporary contract for less than a year at the station after BBC bosses chose not to renew his contract. 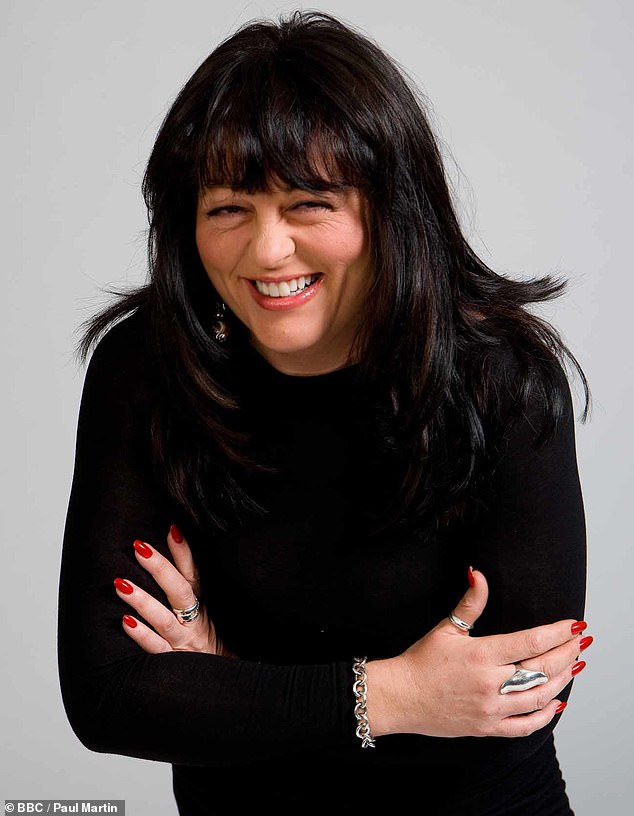 The Leeds presenter said she was told by BBC bosses to ‘ignore his harassment’.

She said: ‘Every time he posted on the different platforms, I would email them.

‘I pleaded for help many, many times. Managers would tell me how awful it was, that it was nothing to do with them or they weren’t there at the time.’

After claiming her complaints were ignored for many years, she said she felt ‘isolated’.

Ms Green spoke of Belfield’s ‘vile’ character, adding that he often talked about ‘the size of women’s breasts and watching Babestation on TV’.

A spokesperson for the BBC, responding to Ms Green’s claims, last night told the Sun: We know this has been very difficult for those involved and we continue to provide support to current and former staff. 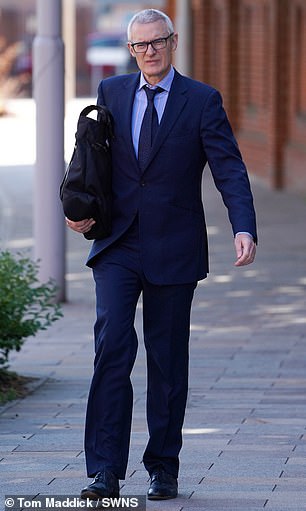 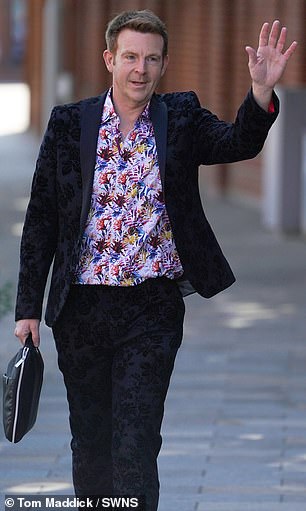 Jeremy Vine (left) gave evidence in the trial of former BBC Radio Leeds presenter Alex Belfield (right). They are both pictured outside court on July 13

He was found not guilty of stalking to cause alarm in relation to Ms Green, however, was given a restraining order.

Jurors convicted Belfield of four charges committed between 2012 and 2021.

He was found guilty of stalking to cause alarm and distress to former BBC Radio Northampton DJ Bernie Keith and videographer Ben Hewis.

The charges faced by the former BBC DJ

Alex Belfield had been charged with stalking eight other broadcasters and media figures.

After a trial at Nottingham Crown Court, a jury spent more than 14 hours deliberating before returning with the verdicts.

The jury could either find him not guilty, guilty, or convict him of the lesser offence of ‘simple stalking’, which means stalking without causing alarm or distress.

He was accused of stalking to cause alarm and distress to the following people:

Mr Keith said he had been left feeling suicidal by a ‘tsunami of hate’ targeted at him, the court heard.

The jury also found him not guilty of accusations of stalking to cause alarm and distress to BBC’s former head of north Rozina Breen, former managing editor of Radio Leeds Helen Thomas, and former BBC Radio Leeds presenter Stephanie Hurt.

The judge, however, put in a restraining order to prevent Belfield, who showed no reaction as he was sentenced, from contacting his victims until further notice.

This included the four women who also said that they received online abuse at the hands of the DJ.

Ms Breen and Ms Thomas said Belfield started trolling them around the same time as Ms Green in 2012.

Ms Breen told the court she had been wrongly accused of ruining his career and said that his abuse was ‘like a noose around my neck that every now and again tightens when he wants me to know he is still there’.

Ms Thomas said she was sent hundreds of abusive emails and was subject to Benfield’s rants on YouTube.

Describing watching Belfield’s video output as like swimming in sewage, Mr Vine told the court last month: ‘It felt like I had a fish hook in my face and my flesh was being torn, and the only way to avoid further pain was to stay completely still.’

In dramatic witness evidence, Mr Vine sobbed as he told jurors how Belfield’s videos and tweets about him launched an ‘avalanche of hatred’ from other internet users and meant he had to install security cameras in his home because he feared one of the 42-year-old’s ‘disciples’ may launch a knife or acid attack on him or his family.

Nottingham Crown Court heard Mr Vine, who claimed Belfield made 124 references to him in his online content in one 14-day period, was even forced to put up a picture of Belfield in the hallway and warn his teenage daughter to be on her guard while on the street – causing her to burst into tears.

Mr Justice Saini, sentencing, told Belfield, who was sat taking notes in the court dock: ‘Your offences are so serious, only a custodial sentence can be justified.’

John McGuinness QC, prosecuting, had told jurors that Belfield’s offending was ‘more akin to internet trolling’ than the ‘more recognisable form of stalking – following the victim when they are moving around in the street, or turning up at their house or place of work to confront them.’

He said the case involved Belfield either repeatedly directly contacting his victims via email, tweets or Facebook messages, or making statements about them in emails, on Twitter, and in videos, he uploaded to the internet.

But during his evidence, Mr Vine revealed he had previously had a ‘physical’ stalker – and claimed that was a ‘picnic’ compared to Belfield’s online harassment, which took place over an 11-month period between 2020 and last year. 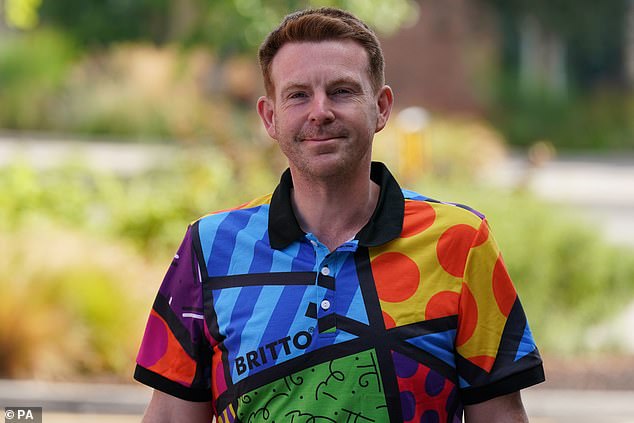 Belfield, pictured here arriving at Nottingham Crown Court yesterday, was found guilty of two counts of simple stalking and two counts of stalking to cause alarm and distress

He described how Belfield encouraged supporters to make hoax calls to his Channel 5 TV and BBC Radio 2 shows.

Mr Vine said he wasn’t aware of Belfield’s existence until April 2020 when an acquaintance sent him a link to a video on YouTube that featured a ‘rant’ about him – with Belfield concluding: ‘This guy really p***** me off.’

Mr Vine said that in hindsight, he ‘wished he hadn’t’ viewed it, adding: ‘Watching this man is like swimming in sewage.’ 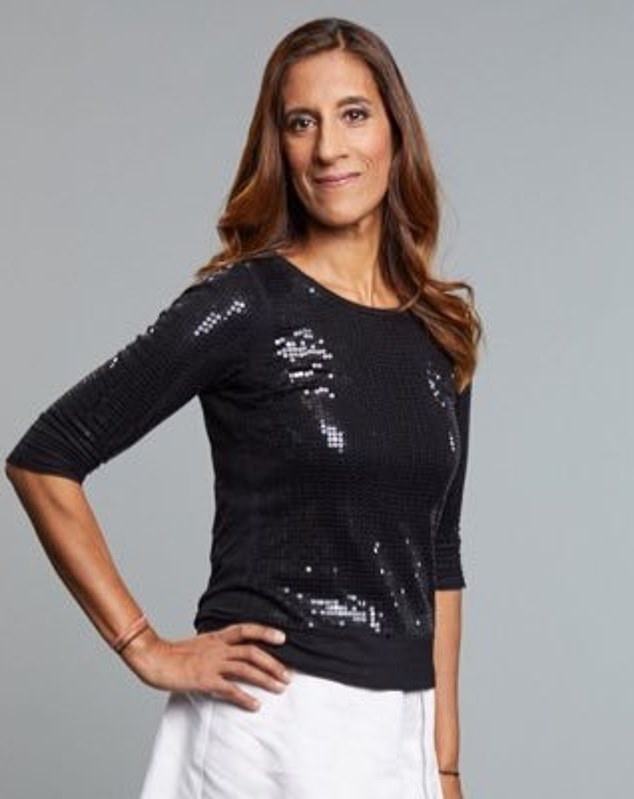 Belfield was also accused of stalking Rozina Breen (pictured) the former head of BBC north and his boss when he was at BBC Radio Leeds. He was found not guilty of this charge

A ‘constant bombardment’ of videos, tweets and messages then followed.

Mr Vine told the hearing: ‘I can see he is really starting to personally dislike me, and I do not know why because I have never had anything to do with this man.

‘This starts to get more worrying for me because clearly it is Alex versus Jeremy and he has an agenda, and I am wondering if I am starting to have a problem here.’

He added that Belfield started falsely claiming that Mr Vine had ‘stolen’ £1,000 of licence fee payers’ money to put towards a memorial service for radio executive John Myers, who died at the age of 60.

Mr Vine broke down as he told jurors how that accusation, which he described as a ‘complete lie’, had led to one troll targeting an online tribute he posted to his father, who died of Parkinson’s disease.

Mr Vine added that Belfield, of Mapperley, Nottingham, escalated the harassment from ‘week to week’ to ‘day to day’, claiming: ‘He operates through persistence and repetition.

He added: ‘It launched incredible hate against me. I had 5,000 to 10,000 hateful personal tweets as a direct result of Belfield.

‘He kept on and on. I was anxious. I couldn’t eat or sleep for a time.

‘I felt wounded and felt there was absolutely no escape.

‘We are dealing with serious criminality here. This is not a regular troll. This is the Jimmy Savile trolling. Every reference to him makes my flesh creep. All he does is lie. 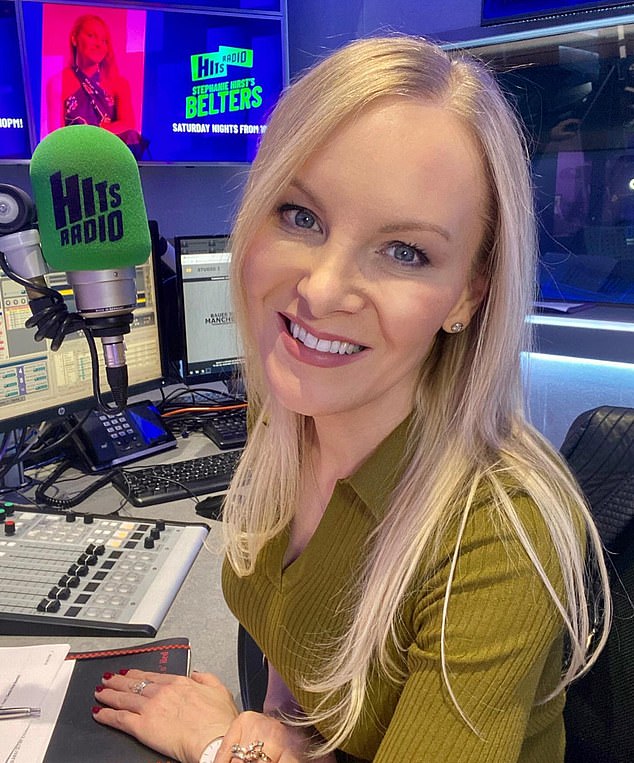 He was also accused of stalking Stephanie Hirst (pictured). He was found not guilty of this charge

‘I had a physical stalker who followed me. That was a picnic compared to this guy. His videos are still online. In 1,000 years my great, great grandchildren will see stories about how I stole £1,000, and there is nothing I can do about it.’

Mr Justice Saini said a pre-sentence report showed while Belfield ‘fully acknowledges the distress to victims’ it also ‘highlights you still appear to focus on the impact on you and feel in certain respects you’ve been unfairly treated’.

The judge told Belfield that while not ‘traditional stalking’, ‘your methods were just as effective a way of intimidating victims and in many ways much harder to deal with.’

He added there was ‘no escape’ for Belfield’s victims, until bail conditions were imposed ahead of his trial and agreed with Mr Vine’s characterisation the ex-DJ had ‘weaponised the internet’ against those he targeted.

‘As you quoted, your aim was to haunt your victims; they believed you would never go away,’ the judge said.

Mr Justice Saini said that although Belfield had a right to free speech, he ‘wasn’t entitled to ruin the personal lives’ of those he targeted – who had ‘no escape’ until police bail conditions stopped the harassment following his arrest.

Along with his sentence, Belfield was forced to pay £10,000 in costs.