The live-music leg of the BBC Proms kicked off with a composition ‘exploring themes of identity’ by a renowned Black British composer.

Kendall sat in the audience as her spine-tingling Basquiat-inspired composition was performed to empty seats.

Classical-music enthusiasts have to watch the show from their sofas this year due to coronavirus restrictions as performers remained spaced out in a socially-distanced arrangement.

The final two weeks of the season will end in the much-talked about Last Night of the Proms, which has been hit with controversy surrounding the BBC’s decision remove the lyrics from Rule Britannia and Land of Hope and Glory after critics claimed the patriotic anthems were ‘racist’. 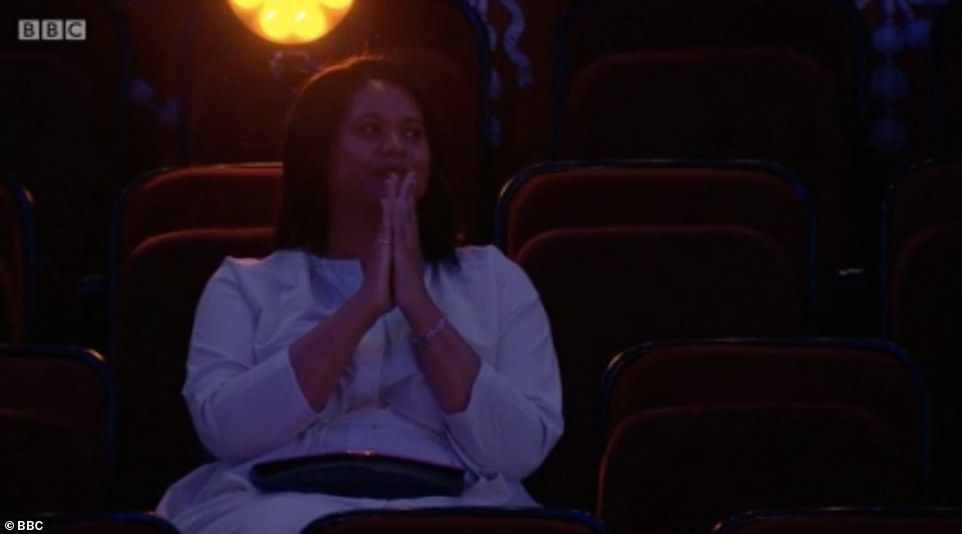 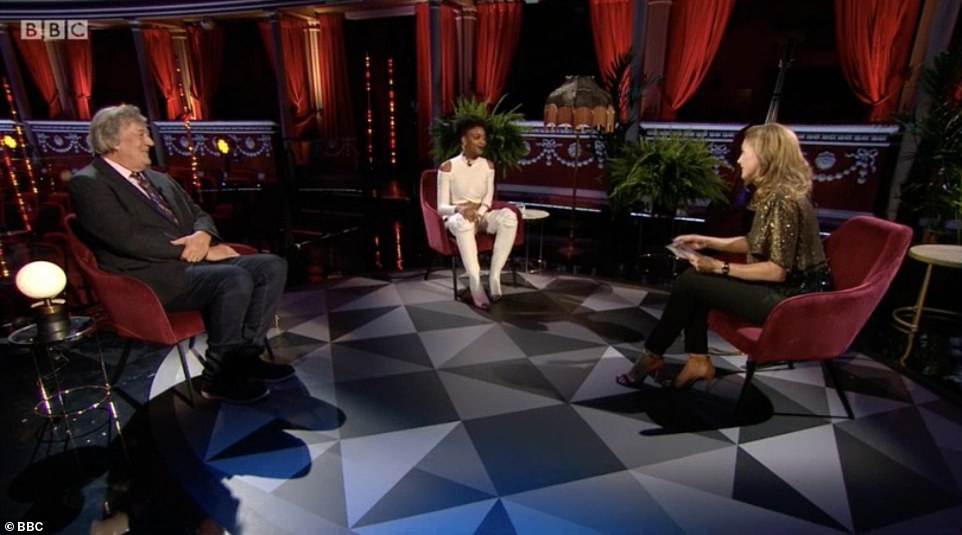 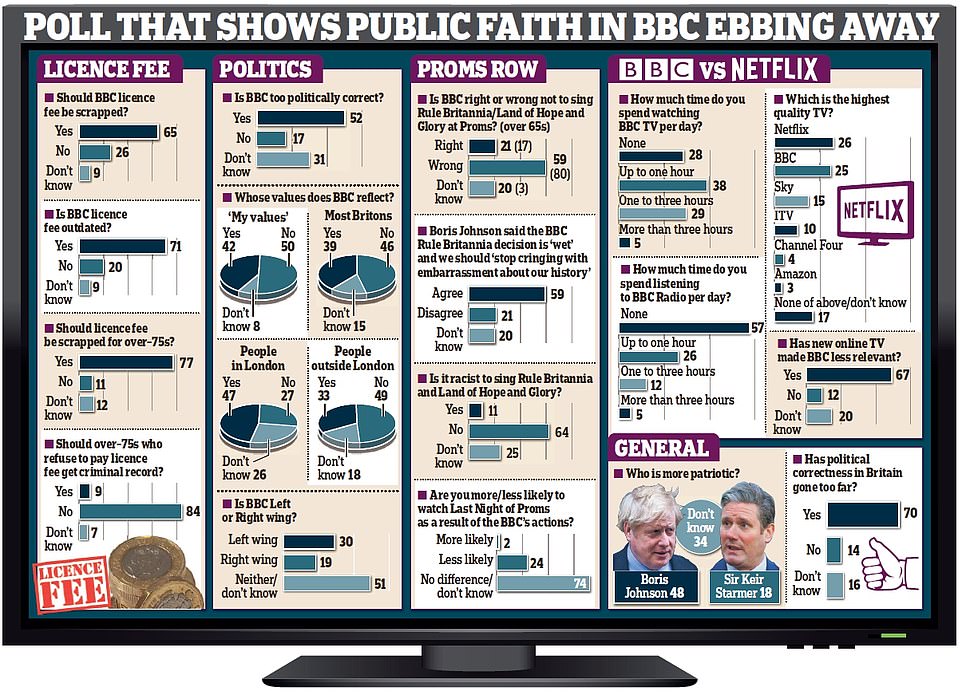 It comes as an exclusive Daily Mail poll reveals growing public discontent with the broadcaster. Two thirds of voters want the £157.50 television charge scrapped and 59 per cent believe the BBC was wrong over the Rule Britannia singing row

BBC in second snub to Land of Hope and Glory: Song fails to make the cut on Radio One’s chart show despite making the Top 20 just days after Last Night of the Proms racism row

By Lizzie Deane for the Daily Mail

Land of Hope and Glory got to number 17 in the official UK chart yesterday, but BBC Radio One didn’t play it on its countdown show.

Dame Vera Lynn’s rendition of the hugely popular anthem returned to the charts after the corporation announced it would be performed without lyrics at the Last Night of the Proms following a racism row.

But the 1974 recording by the forces’ sweetheart was not played on BBC Radio One’s Official Chart show yesterday evening.

Since the show moved from Sundays to Fridays back in 2015, it has not played every song in the Top 40 due to a shorter schedule.

The BBC has faced fierce backlash for its decision to only play orchestral versions of Land of Hope and Glory and Rule Brittania in the rousing finale of its concert next month.

An online petition calling on the broadcaster ‘not to betray our patriotic heritage’ and reinstate the songs had received almost 70,000 signatures last night.

Dame Vera’s cover from her 1994 compilation album Vera Lynn Remembers: The Songs that Won World War Two has occupied the top spot in online music store iTunes’ singles chart since re-entering on Tuesday when the shock announcement was made.

It follows a campaign by actor Laurence Fox who told his 230,000 Twitter followers: ‘Wouldn’t it be great if we could all come together to get Dame Vera Lynn’s version of ‘Land of Hope and Glory’ number one in the charts? Would the BBC then have to play it? What a beautiful day that would be.’

The BBC announced the lyrics would be axed after reports that event organisers wanted the songs dropped because of their association with British colonialism.

However, Dame Vera Lynn’s daughter told the Mail earlier this week that her mother would still be singing Land of Hope and Glory if she were alive.

Mrs Virginia Lewis-Jones, 74, claimed the song is against slavery and her mother – who died in June aged 103 – would be proud of her for speaking out.

She said: ‘I feel that I can see my mother now saying ‘You tell ’em girl’. She would feel the same thing and, if she were here now, she would be singing it.’

Cellist and composer Ayanna Witter-Johnson – who appeared as a guest alongside Stephen Fry – discussed the piece with presenter Katie Derham.

The musician, who is also a friend of Kendall, said: ‘I can only imagine as a young British composer of African-Caribbean ancestry exploring themes of identity in this unprecedented year where we celebrate 70 years of Windrush, in the midst of the Black Lives Matter movement, and a pandemic and a Prom like no other.

‘Honestly she’s got to be feeling just incredibly out of this world. She’s probably feeling very very honoured.’

The BBC’s classic music series has this year been embroiled in controversy over whether Rule Britannia and Land of Hope and Glory should be sung on its final night.

As it stands, the patriotic songs will be played by an orchestra only on September 12, supposedly because the lack of an audience will diminish their impact.

It comes as an exclusive Daily Mail poll reveals growing public discontent with the broadcaster.

Two thirds of voters want the £157.50 television charge scrapped and 59 per cent believe the BBC was wrong over the Rule Britannia singing row.

Ministers are expected to make a final decision next month on whether non-payment should no longer be a criminal offence. Any change would be introduced in 2022.

The proposal will be fiercely resisted by the corporation, which says it could lose £1billion over five years.

But today’s poll reveals overwhelming support for the idea, with just 18 per cent believing non-payers should  face a criminal record.

A source warned that the BBC ‘have not helped themselves’, adding: ‘It was made very clear that they would be expected to honour the agreement to fund free TV licences, but they chose not to.

‘And the recent misjudgements over the Proms just strengthen the feeling that they are badly out of touch with the public they are supposed to serve.

‘Will that help them head off decriminalisation? You can draw your own conclusions but it is hard to see why they should continue to be treated as a special case.’

The poll’s findings include:

During last year’s election Boris Johnson suggested the licence fee could be axed. He said: ‘How long can you justify a system whereby everybody who has a TV has to pay to fund a particular set of TV and radio channels?’

But, with the licence fee regime due to run until 2027, ministers have now set their sights on decriminalisation.

A formal government consultation on the issue was launched in February and received well over 100,000 responses. Every household with a TV set must buy a licence, regardless of whether or not they use BBC services.

Failure to pay can lead to court action leading to a fine of up to £1,000. Those who fail to pay can face jail in extreme cases. In 2018, more than 121,000 people were convicted and sentenced for licence fee evasion and issued with fines averaging £176. 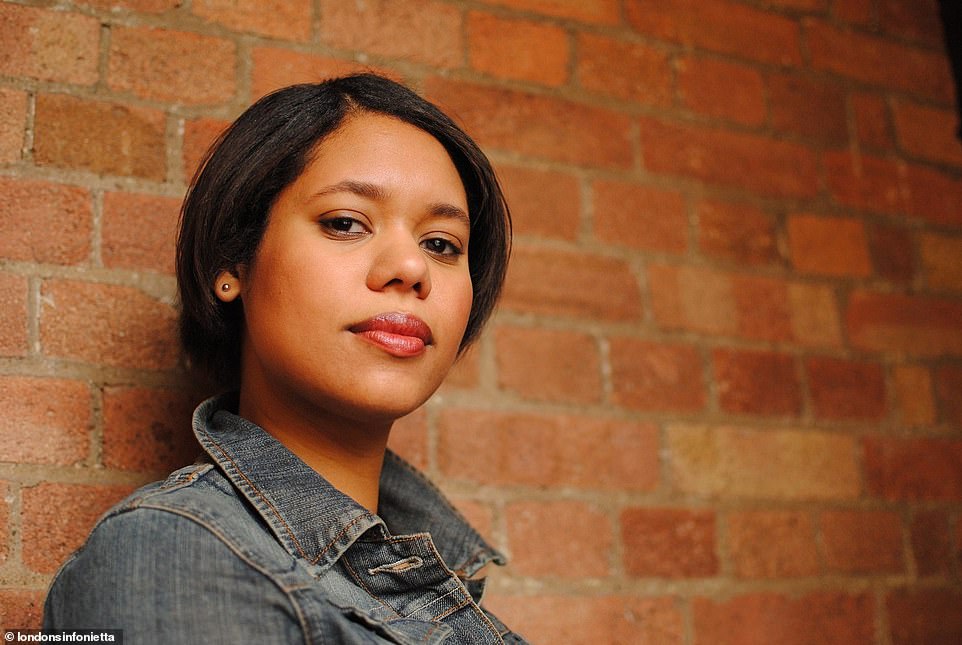 Decriminalisation would not make payment voluntary. Instead it would become a civil offence similar to non-payment of utility bills or parking fines.

Tom Hunt, Tory MP for Ipswich, said the corporation had lost the trust of the public. He added: ‘They are chipping away at what makes our country what it is. People are sick of it. A year ago, wanting to scrap the licence fee was a minority pursuit but that is changing very fast. The situation is unsustainable. Decriminalisation is a good start.’

Peter Bone, a fellow Tory MP supporting backbench legislation on the issue, said: ‘The BBC shot themselves in both feet over Last Night of the Proms. Yet again they showed contempt for the values of ordinary people.’

In its response to the consultation, the corporation said decriminalisation would ‘inevitably require significant cuts’ to programmes and services. It said the existing system, which raises £3.69billion a year, was ‘fair, effective and good value for money’.

It said a government review of the system in 2015 found that decriminalisation would make collection of the licence fee less efficient.

JL Partners interviewed a total of 1,012 adults online for the Mail’s poll on Thursday.

Prime Minister Boris Johnson’s criticism of plans to perform traditional songs at the BBC Proms without lyrics was ‘irresponsible’, according to a composer who has worked on the Last Night.

The live music leg of the BBC Proms kicked off on Friday following days of controversy over the singing of Rule, Britannia! and Land Of Hope And Glory.

Errollyn Wallen told Times Radio that every year there is a ‘hullabaloo’ over the Last Night.

‘Some of that was whipped up, to be honest,’ she added.

Earlier this week, Mr Johnson said he found the decision to remove the lyrics difficult to believe.

‘I think it’s time we stopped our cringing embarrassment about our history, about our traditions, and about our culture, and we stopped this general bout of self-recrimination and wetness,’ he added.

Responding to his comments, Wallen said: ‘I think that is the first step, certainly cringe with embarrassment, and then go further and let’s open up the history that we are all part of.

‘So that is the first step.’

She added: ‘I think he was being irresponsible at a time when the arts gets so little support.

‘It has been hung out to dry, especially with all that’s happened with Covid-19.

‘His remarks weren’t at all helpful.’

She added she was ‘dismayed’ that so many politicians waded into the row.

The composer has written a new arrangement of Jerusalem which will be played during the Last Night, which she said features a soprano singing the lyrics rather than a choir.

By Paul Revoir Media Editor for the Daily Mail

The race is on to bring a US-style TV news service to Britain with two groups plotting to rival the BBC and Sky.

Both the planned services, set to be dominated by ‘strong’ and ‘well-known’ personality presenters, are expected to shake up the market and challenge the BBC, which is increasingly regarded as Left-of-centre and dominated by ‘woke’ politics.

In a sign of how serious the plans are, one of the businesses has been in talks with the BBC’s most respected political interviewer Andrew Neil, who has still not resolved his future at the corporation.

While it is unclear exactly where the new services will pitch themselves on the political spectrum, it is thought they are certain to be to the Right of the BBC.

Today’s exclusive Daily Mail poll reveals that half of people said the corporation ‘does not reflect’ their values. And 59 per cent said they agreed with Boris Johnson’s criticism of the BBC for ‘cringing with embarrassment over our history’.

The two planned new services are both expected to be more ‘news-talk’ shows than the traditional rolling news services that are provided by BBC News and Sky News. One of the companies, GB News, which has already secured an Ofcom licence, is backed by investors from the US and the UK. It has been in talks with American media giant Discovery.

It is understood that GB News has been in discussions with Mr Neil about joining up, with sources suggesting it would be similar to a TV version of the LBC radio station.

According to an insider it will aim to sit in the centre of the political spectrum but be less Left-wing and less woke than the BBC. The insider said: ‘Just by taking a centrist line it will seem more to the Right because the others are so much to the Left.’ Sources say News UK, the publisher of The Sun and The Times, which is controlled by Rupert Murdoch, has also been developing plans to launch a news channel. Discussion are at an advanced level.

Earlier this year David Rhodes, former president of CBS News in the US, was brought in to News UK. It is understood he joined to launch a news channel.

There are said to be high-level discussions about what form the service will take. Mr Rhodes also worked as a senior executive at Fox News, which is on the Right of American politics and is famous for its strident take on the news.