The BBC has resorted to asking viewers to monitor the light around their TVs after  complaints that hit shows like The Luminaries and Wolf Hall are too gloomy.

As part of a study, the broadcaster will question participants about the layout of their windows, sofa and screen in a bid to create the best lighting conditions.

It follows armchair critics being left frustrated by dimly lit scenes in the BBC drama The Luminaries, with the director of Wolf Hall also defending the lighting in the show as ‘lovely and atmospheric’ after viewers claimed it was ‘too dark’.

Director Peter Kosminksy previously used special low-light cameras to capture the action in BBC’s Wolfhall, above, and hit back at critics claiming the lighting was too dim

The new project could lead to the development of smart sets that can adjust to the brightness of a room, alongside menus to optimise different quantities of light.

BBC Research & Development executive Phil Layton, who is running the study, told The Times: ‘Some dramas are dark because that’s the feel that the director of photography wanted to create.

She added: ‘TV screens and tablets will potentially need to be able to adapt to variations in viewing lighting to give audiences the best viewer experience as possible.’

Director Peter Kosminksy previously used special low-light cameras to capture the action in BBC’s Wolfhall, and author Hilary Mantel, who has praised the adaptation,  said that the candlelight helped put actors into the ‘Tudor frame of mind’.

Mr Kosminksy hit back at critics claiming the lighting was too dim, by arguing that it could equally be viewed as ‘lovely and atmospheric’.

He added: ‘They are legitimate concerns to have but the camera we were using is amazing. 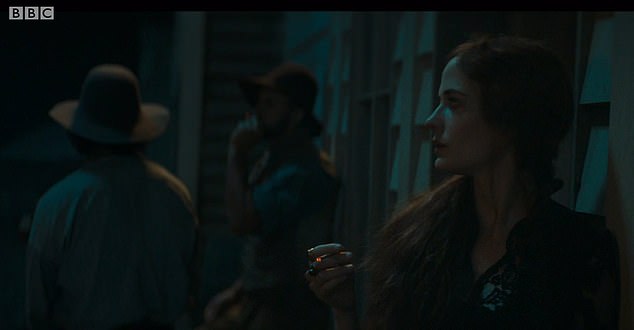 Armchair critics were left frustrated by dimly lit scenes in the BBC drama The Luminaries, above, with one Twitter user posting it was ‘too dark to see what’s going on’ 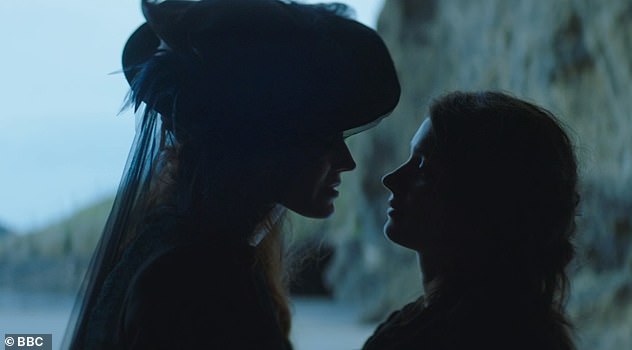 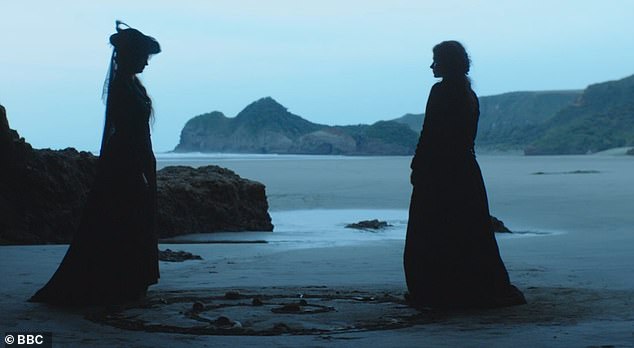 Viewers were frustrated by the lighting in the show, saying it is ‘so dimly lit’ that it is difficult to make out characters’ faces. Pictured: Eva Green (left) and Eve Hewson

‘I don’t like the type of filmmaking where people have to shut off all the lights to be able to see what is on the screen properly. I would never present something to an audience that was dim or gloomy or difficult to see.

‘Of course the night scenes are quite moody but only in the sense that any drama’s night scenes will be quite moody compared to a daylight scene. It would be completely stupid to give something to audiences that they weren’t able to see.’

Meanwhile, Twitter users reacted to the lighting in The Luminaries last month, with one tweeting: ‘Ironic it’s called #TheLuminaries when you can see b****r all because it’s always dark.’

Another added: ‘I was going to watch #TheLuminaries tonight but then my husband offered to lock me in the dark in the downstairs loo and mumble unintelligibly through the keyhole… so I chose that instead.’

Social media users reacted to the lighting in the BBC’s The Luminaries, with one tweeting: ‘Ironic it’s called #TheLuminaries when you can see b****r all because it’s always dark’

A third wrote: ‘#TheLuminaries on could do with some illumination, it’s too dark to see what’s going on.’

Viewers also previously complained over characters ‘mumbling’ on screen in the show, making it difficult to hear the dialogue.

It comes after the BBC trialled technology that will allow viewers to tune out background noise, boost characters’ voices and possibly make plots easier to follow.

An episode of BBC One medical drama Casualty was the first show to be made with the new tool, The Times previously reported.

A version of the episode on the BBC website now features a slider button – moving it to the right retains the standard audio and shifting it to the left reduces background noise, music included, to make the dialogue clearer. 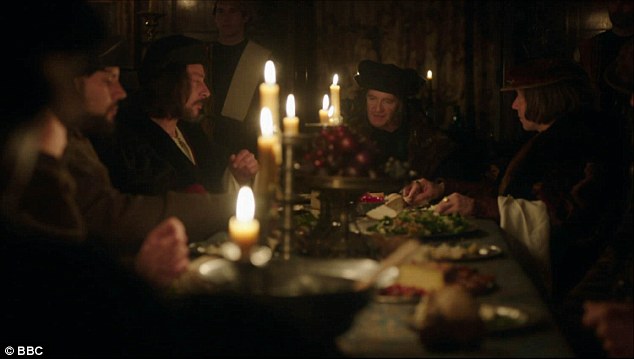 But some viewers of Wolf Hall complained the historical drama’s use of realistic candlelit scenes left them in the dark, or wondering if their televisions were ‘on the blink’ 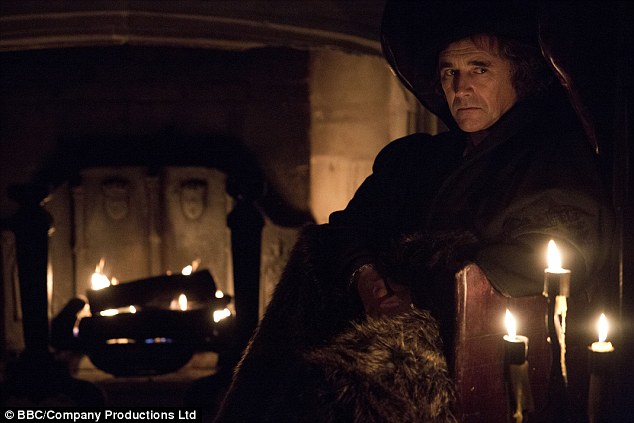 The makers of the Tudor drama, starring Mark Rylance as Thomas Cromwell (pictured), went to such lengths to recreate the world of Thomas Cromwell that they used only candlelight to illuminate night-time scenes

The project was targeted at the 11 million Britons with hearing loss and any others who struggle to make out what actors are saying.

Frustrated viewers filed thousands of complaints with the BBC after they were unable to make out the dialogue in tense dramas like Jamaica Inn and Happy Valley.

Their anger prompted a national debate about actors who don’t enunciate – with the issue even being raised in parliament.

Lord Blunkett, the former Labour home secretary, who is blind, criticised actors who tried to create atmosphere by mumbling on-screen in 2017.

‘Atmosphere is fine if you can lip read,’ he said in the House of Lords. ‘When you can’t, the mumbling becomes not just an irritant, but an impossibility.’

Each individual element of sound in a programme is graded in a hierarchy based on how important it is to the plot. Some sound effects – like the beep of a heart monitor in medical shows like Casualty – are crucial to an episode’s narrative.

The new tech allows these more important noises to stay prominent, while less essential sounds are turned down.

The corporation has had many problems with the sound on some of its other major TV series.

In January last year, some viewers of the BBC’s version of War and Peace complained about being unable it to hear it properly due to the actors mumbling.

The big budget adaptation of Leo Tolstoy’s novel starring James Norton and Tuppence Middleton garnered rave reviews from many, but for others it became an exercise in lip-reading.

Viewer Janice Mitchell tweeted at the time: ‘Why on earth was the actor playing Pierre in War and Peace chosen as all he does is mumble? I can hardly understand a word he says.’ 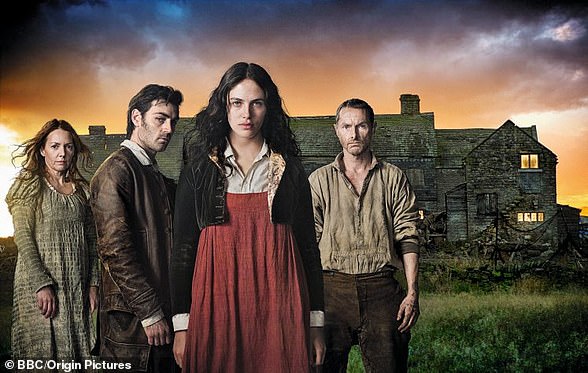 What did he say? Three years ago the 2014 lavish adaptation of Daphne Du Maurier’s book Jamaica Inn (pictured) drew more than 2,000 complaints about sound quality – and the BBC blamed actors for mumbling

Viewers complained that they could not hear the actors and in many cases their thick accents were impenetrable – and the BBC said midway through the series that they would change sound levels.

Responding to criticism at the time, the BBC’s drama commissioner Ben Stephenson admitted there was an issue with the show, adding: ‘I think actors not being clear is one part of it.

‘But my understanding about the complaints about Jamaica Inn was more complex than that, so I think it’s probably not right to just single out that, but clearly we want actors to speak clearly.’

Meanwhile crime drama Quirke was criticised for the same issue of mumbling in May 2014, with viewers saying they had to switch on subtitles or turn up the volume to the maximum setting.

Set in 1950s Dublin and based on the novels by Booker Prize-winning author John Banville, Quirke follows the city’s chief pathologist, played by Gabriel Byrne, as he investigates a murder.

But many of the 4.2million who watched the first episode in the three-part series struggled to follow the action, although a BBC spokesman said there were ‘no reported problems or complaints’.