An army of BBC employees has rubbished Culture Secretary Nadine Dorries’ claim that the Corporation is full of people ‘whose mums and dads work there’ by revealing how their parents were nurses, joiners, squaddies, teachers and window cleaners.

The anti-woke Cabinet Minister slammed the BBC during an event at the Conservative Party Conference in Manchester this week, taking aim at its alleged nepotism and elitism – despite herself once employing her two daughters on her parliamentary staff.

Speaking to the Telegraph’s Chopper’s Politics podcast, the Liverpudlian Bedfordshire MP even claimed that the Corporation wouldn’t exist in ten years’ time – a remark so incendiary that even Boris Johnson was forced to step in and effectively rein her in.

Ms Dorries said the BBC’s ‘groupthink mentality’ excluded minorities and people with regional accents and demanded change at the organisation, saying its staff needed to reflect a wider demographic than just people ‘whose mum and dads work there’.

But her comments sparked a furious blast from BBC staff including presenter Clive Myrie, who used the Twitter hashtag #mymum to collate examples of staff who didn’t get jobs through their parents.

‘My mum was a seamstress, working for Mary Quant and Marks and Spencer. Umm, I wonder what the parents of other BBC employees did/do, while their progeny are employed by Aunty Beeb!’ Mr Myrie tweeted.

Responding to his tweet, scores of BBC staff fired back at Ms Dorries. Radio Norfolk’s Richard Hancock said: ‘Dad a teacher, Mum a part-time bookkeeper until she became a single parent at which point she got a job at a building society & trained as an accountant to keep me in school (comprehensive) shoes.’

BBC World Service presenter Tamasin Ford tweeted: ‘My mum (single parent) went back to school to do her A-Levels, then went on to Uni (and got a first!) while we were all teenagers and then worked as a carer in a care home, while trying to write and get a novel published in any spare time she had #mymum. I knew no-one at the BBC.’

Culture Secretary Nadine Dorries speaks during a session on the third day of the annual Conservative Party Conference, October 5, 2021

Ms Dorries’ comments sparked a furious blast from BBC staff including presenter Clive Myrie, who used the Twitter hashtag #mymum to collate examples of staff who didn’t get jobs through their parents

The BBC’s Nick Robinson got into a slanging match with Boris Johnson as the Prime Minister made his first appearance on the Today programme for two years – with the presenter at one point telling him: ‘Stop talking!’.

The interview at the Conservative conference in Manchester immediately got off to a tense start, with Mr Robinson pointedly saying how long it had been since Mr Johnson was last on the show, prompting him to cheekily reply ‘has it really been that long?’

During the interview, Mr Johnson was interrupted during a long-winded answer on the supply chain crisis by Mr Robinson, who told him: ‘Prime Minister, you are going to pause. Prime Minister, stop talking, we are going to have questions and answers, not where you merely talk, if you wouldn’t mind.’

The PM replied, ‘I’m very happy to stop talking,’ before Mr Robinson asked him another question about business taxation.

The intervention clearly irritated Mr Johnson, who said he wanted to ‘get back to the point I was trying to make when you asked me to stop talking, an injunction you seem to have revoked’.

After a series of other irritable exchanges, Mr Robinson ended the interview with another loaded comment, telling him: ‘Thank you for talking to the Today programme and allowing the occasional question as well.’

Reporter Phil Mackie said: ‘Dad was a soldier, then worked as a journalist for local paper, then press officer. Mum was a children’s social worker and then worked with the blind.’

Marianna Spring posted: ‘My mum was a nurse for years – dad a window cleaner and park keeper, then worked for BT and did his a-levels in the evenings to go to medical school! First day there, another student said ‘God they’ve let in a window cleaner who didn’t finish school’. Dad came top of the year.’

Former Radio 4 presenter Neil Sleat added: ‘#mymum was a housewife, before that a bank clerk, and my father worked in the Ministry of Defence. I can’t think of a single colleague whose parent worked for the BBC.’

Reporter Jonathan Josephs said: ‘#mymum was a primary school teacher, my dad a civil servant. We had no links to the media. Hard work got me into the BBC at a time where there weren’t even any training schemes available. As the only kippah wearer in the newsroom I think its an incredibly diverse place to work.’

And South Asia correspondent Rajini Vaidyanathan posted: ‘Both parents were immigrants to UK. Both suffered workplace racism. Dad was an academic with multiple degrees – worked in quality control in a lab. Mum was a doctor in India, in the UK a community worker/home office interpreter. Am only family member at the BBC/in journalism.’

MailOnline has approached the Department of Culture and the BBC for comment.

Asked whether the licence fee would still be compulsory in 10 or 20 years, Ms Dorries told the fringe event: ‘I can’t look into the future. Will the BBC still be here in 10 years? I don’t know.

‘We can’t look into the future. It is a very competitive environment at the moment. You have got Amazon Prime, Netflix and other bods coming down the line.

‘This younger generation that are coming through, they certainly watch their television in a very different way to how my generation watched its TV, so who knows where we will be?’

Asked about Ms Dorries remarks, Mr Johnson told GB News in Manchester: ‘The BBC has been around for a very long time, it’s a great national institution, I’ve no doubt that it will be around for a long time to come.’

Ms Dorries herself hit the headlines in 2013 when, as a backbench MP, she was revealed as being among among 28 MPs who gave relatives pay rises at the taxpayers’ expense.

Responding to his tweet, scores of BBC staff fired back at Ms Dorries. Radio Norfolk’s Richard Hancock said: ‘Dad a teacher, Mum a part-time bookkeeper until she became a single parent at which point she got a job at a building society & trained as an accountant to keep me in school (comprehensive) shoes’ 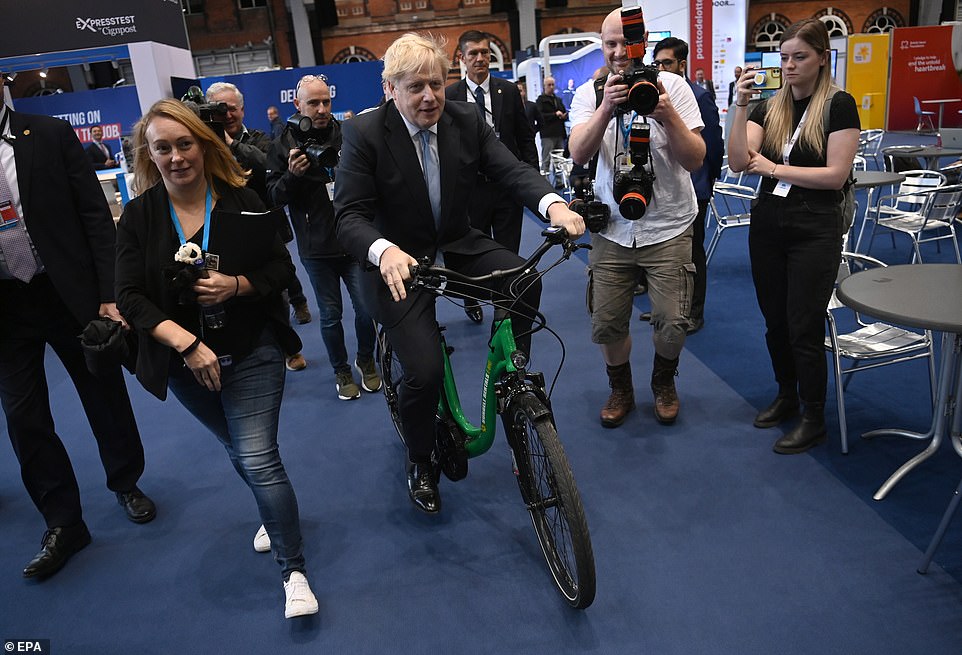 Bias at the BBC

The BBC has repeatedly been accused of bias by critics

In July, it emerged that the corporation had received a record 500,000 complaints from viewers in a year amid concerns over the broadcaster’s ‘perceived bias’.

The figures were revealed in the BBC’s annual report, which acknowledged that ‘too many people perceive the BBC to be shaped by a particular perspective’.

The list of complaints was topped by Emily Maitlis with her monologue on Newsnight about Dominic Cummings in May 2020.

Ms Maitlis, during a discussion about Mr Cummings’ journey from London to Durham during the first national lockdown, claimed Boris Johnson’s former adviser ‘broke the rules’ adding: ‘The country can see that, and it’s shocked the Government cannot.’

Her speech later prompted 23,674 complaints and broadcasting watchdog Ofcom warned the BBC that hosts must not ‘inadvertently give the impression of setting out personal opinions’

BBC Breakfast presenter Naga Munchetty, alongside co-host and Charlie Stayt, also attracted 6,498 complaints after the pair appeared to mock Housing Secretary Robert Jenrick over the size of the Union flag in his office.

Ms Munchetty was later forced to apologise after liking social media posts in support of the on-air comments.

The one-time I’m A Celebrity… Get Me Out Of Here! contestant also paid her daughter Jennifer, then 26, up to £35,000 to work as a ‘senior secretary’.

In her fringe appearance yesterday Ms Dorries insisted she did not want a ‘war’ with the broadcaster but suggested it would have to set out how it will change before the next licence fee settlement, which covers the five years from April 2022.

Ms Dorries, who went from a working-class background in Liverpool to become a bestselling author and Cabinet minister, hit out at the lack of opportunities in the arts and sports for children with similar upbringings.

At an event hosted by the Telegraph’s Chopper’s Politics podcast, Ms Dorries, who has only been in her role since September’s reshuffle, said she had ‘an interesting meeting’ with BBC director-general Tim Davie and chairman Richard Sharp.

‘The perspective of the BBC is that they will get a settlement fee and then we will talk about how they are going to change,’ the Culture Secretary said.

‘My perspective is ‘tell me how you are going to change and then you get the settlement fee’.

Ms Dorries highlighted a series of issues she had with the broadcaster, including a lack of working-class diversity and perceived political bias.

‘It’s about recognising that access and lack of impartiality are part of your problem,’ she said.

She said there was a ‘groupthink’ at the corporation which ‘excludes working-class backgrounds’.

‘North West, North East, Yorkshire – if you have got a regional accent in the BBC it doesn’t go down particularly well,’ she said.

‘They talk about lots to do with diversity but they don’t talk about kids from working-class backgrounds and that’s got to change.’

Asked how to address that, she said: ‘It’s not about quotas, it’s just about having a more fair approach and a less elitist and a less snobbish approach as to who works for you.’

Ms Dorries told the event the path from a poor background to the top of a career in the arts or media had ‘completely disappeared’. 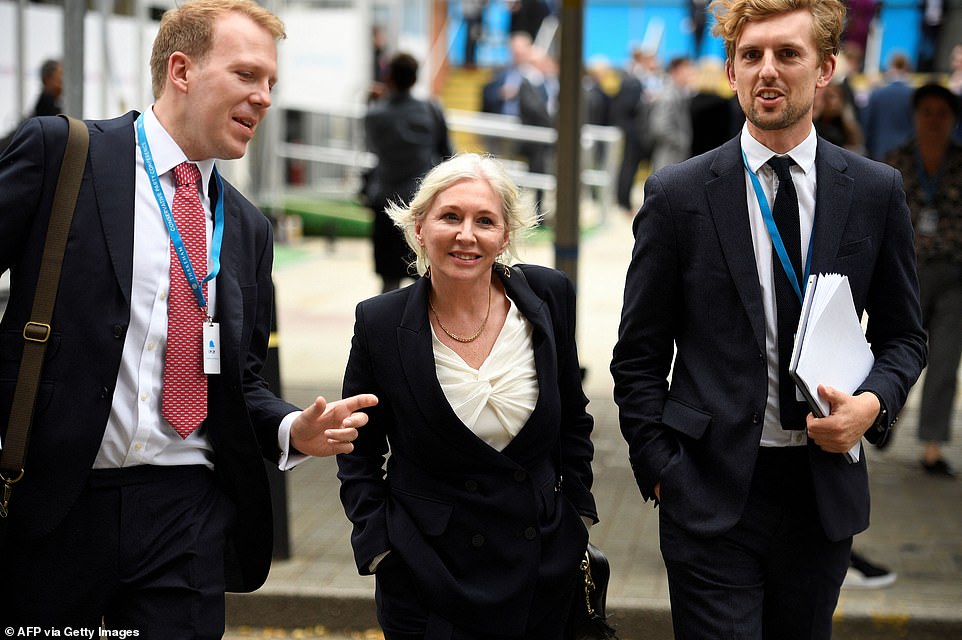 Speaking at a Conservative Party fringe event, the Liverpudlian said its ‘groupthink mentality’ excluded minorities and people with regional accents. 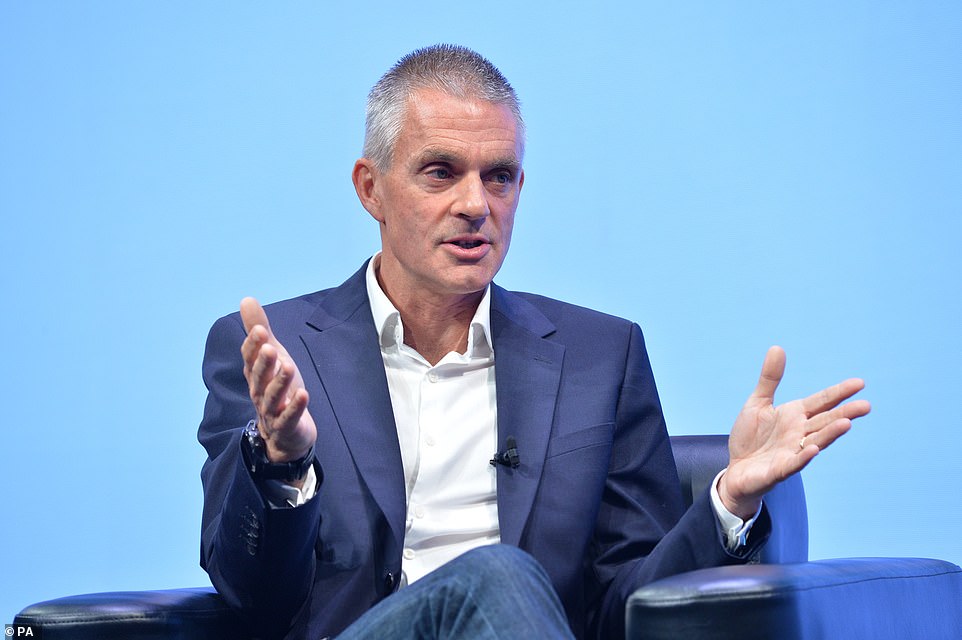 At an event hosted by the Telegraph’s Chopper’s Politics podcast, Ms Dorries, who has only been in her role since September’s reshuffle, said she had ‘an interesting meeting’ with BBC director-general Tim Davie (pictured) and chairman Richard Sharp

‘People from my background wrote books, wrote theatre plays and did really well.

She added: ‘Levelling up isn’t about regional growth figures, it’s not about connectivity, it’s about none of that, it’s about people.

‘I want to go back to those kids and find them a pathway into the industry.’