Star appeal: Fiona Bruce is thought to be earning £800,000 a year for her work as a BBC presenter

The BBC was last night facing questions over why it allows its highly-paid stars to pocket tens of thousands of pounds for speaking engagements.

The corporation has faced a furore over presenter salaries, but it is still allowing them to pick up five-figure sums on their days off for hosting commercial events.

The BBC’s critics warn the practice could undermine the broadcaster’s impartiality and tarnish its reputation.

Question Time star Fiona Bruce, who earns an estimated £800,000 a year, had been due to speak at a lucrative engagement for a firm accused of inadvertently helping criminals to obtain passports.

But after the Daily Mail revealed the potential breach of BBC rules, Miss Bruce pulled out. Business editor Simon Jack was also forced to cancel his appearance at the event.

Last night the BBC confirmed both journalists were potentially in breach of its guidelines. But incredibly it also emerged that the corporation relies on stars to police themselves, and carries out checks on outside events only if stars choose to volunteer details to bosses.

The BBC said it would now remind staff of the rules surrounding speaking engagements to ensure other presenters do not break the rules. The revelations are likely to fuel anger over the BBC inflating star salaries at a time when it is planning to strip 3.7million over-75s of their free licences.

Miss Bruce had been listed as a key speaker in a glossy brochure for the Henley & Partners global citizenship conference in London in November.

The firm helps wealthy clients to purchase citizenship in countries such as Malta and Austria – a controversial process known as ‘citizenship by investment’.

Yesterday Moldova suspended its passports programme due to ‘questions about the companies that are involved’.

The scheme was developed in association with Henley & Partners.

Upon being contacted by the Mail, Miss Bruce cancelled her appearance at the firm’s November event. She is one of the BBC’s highest-earning stars, taking home an estimated £800,000 a year for her work on the Six O’Clock News, Question Time, Fake or Fortune? and Antiques Roadshow.

Jack, who earns up to £175,000 a year, was also due to appear at the three-day Henley & Partners conference. He pulled out yesterday.

The BBC guidelines state: ‘Public speaking commitments or other public appearances should not compromise the impartiality or integrity of the BBC or its content, or suggest that any part of the BBC endorses a third-party organisation, product, service or campaign.’

Alex Armitage, whose agency represents Miss Bruce and Jack, said: ‘We’ve pulled our clients out of it. Thank you for telling us about it.

‘It is absolutely clear that it’s not something our clients should be associated with.’

The BBC refused to say whether its executives had signed off on the engagements. 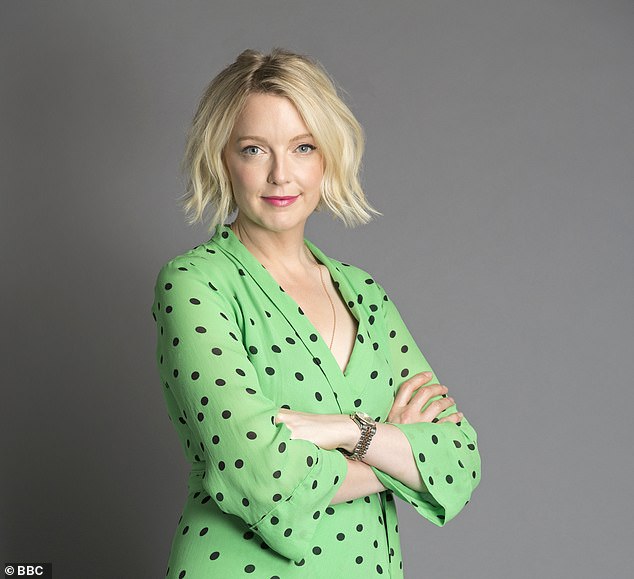 But a spokesman said: ‘We are reminding all of our news presenters and their editors of the rules on participating in external events.

‘We are also reminding them that they should obtain approval from the BBC before they accept such invitations.’

Tory former culture secretary John Whittingdale said: ‘You have a lot of people who are paid a great deal of money by the licence fee payer, and the BBC say, “Oh well, we have to pay that amount in order to be competitive.” But of course a lot of them are earning money outside. And the reason they are earning money outside is that they are very well known from appearing on the BBC.’

Fellow Tory MP Andrew Bridgen added: ‘There should be a register of interests so the public can see what they are doing.’ New rules will restrict free licences to the 900,000 over-75s on Pension Credits.

According to the BBC’s annual report, talent pay rose by £11million last year despite constant pledges to save money and drive costs down.

The City slickers in ‘passports for sale’ storm

With smart London offices a stone’s throw from Buckingham Palace, Henley & Partners has a well-heeled air.

But the firm is the leading player in a ‘passports for sale’ industry which faces damaging allegations it inadvertently helps criminals escape justice – and potentially fuels organised crime, tax evasion and money laundering.

It offers wealthy clients assistance with ‘citizenship by investment’ in safe havens across the Caribbean and EU. Put simply, it effectively helps them to buy passports.

There are many legitimate reasons to do this. It can make travel easier for someone from a country where citizens find it hard to obtain visas, or help to avoid punitive tax regimes.

But critics fear the scheme, many of which Henley & Partners helped to set up and is the agent for, are being used by those who want to escape international sanctions or criminal charges.

And anyone who acquires citizenship in EU territories such as Cyprus, Malta and Austria can then use their new passports to gain access to any other EU country, including the UK.

Earlier this year a report published by the European Council warned that citizenship by investment creates ‘a range of risks for member states… in particular risks to security, as well as risks of money laundering, corruption and tax-evasion’.

Henley & Partners insists it complies with the law of each of the sovereign states in which it operates and that ‘all applicants undergo the strictest due diligence procedures’.

A spokesman claimed it is often accused of wrongdoing because the industry it operates in is misunderstood. They added: ‘Over the past 20 years, Henley & Partners has invested significant time and capital in creating a corporate structure that is wedded to best practice governance and the highest levels of due diligence, even before passing a client over to the consideration of a sovereign state.’

However, in 2009 the firm helped Iranian financier Ali Sadr Hasheminejad gain citizenship in St Kitts and Nevis – which, claim US authorities, he used to avoid international sanctions.

Hasheminejad was arrested in March last year on six counts of bank fraud and scheming to evade US sanctions imposed on Iran over Tehran’s nuclear programme – allegations he denies.

Henley & Partners also helped the Indian-born billionaire Mehul Choksi get a passport in Antigua. He was later accused of $2billion fraud charges, which he denies in their entirety.

According to a report last year by the Commons digital, culture, media and sport committee, Henley helped a Ukranian politician at a time when he was wanted by Interpol to apply for a new passport in St Kitts and Nevis.

Viacheslav Suprunenko was accused of assault during an armed robbery to recover documents in a business dispute. Henley inists it did not help him and claims the committee’s report is wrong, and that anyone granted citizenship through their programmes is highly vetted.

By Katherine Rushton and Tom Payne for the Daily Mail

For years, BBC stars have had a lucrative little sideline. When they are not on air, they routinely top up their salaries with well-paid speaking engagements.

And the sums on offer are often huge. Mid-ranking presenters can easily earn a five-figure sum for an evening’s work. The BBC’s best-known names can comfortably command in excess of £25,000 for a full day. A regular roster of speaking events might be enough to double their salary.

The BBC does little to stop the practice, allowing stars to be seduced by events that range from controversial to the outright embarrassing. 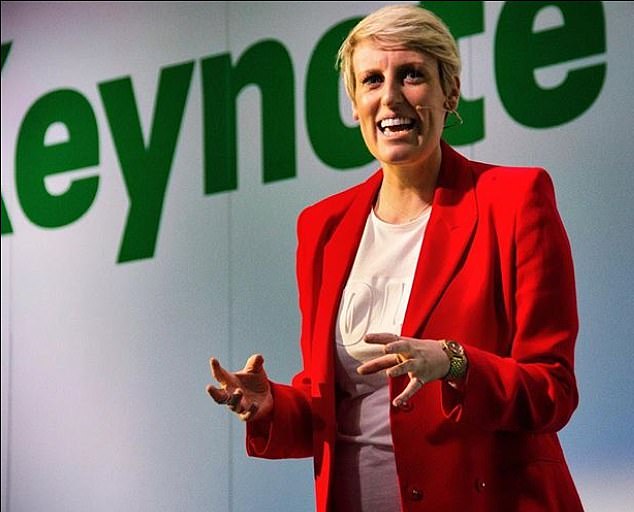 One serial speaker is Steph McGovern, the BBC Breakfast star who earlier this month announced she was pregnant

Incredibly, stars believe they are not even required to declare any outside engagements unless they think there may be a problem.

News at Ten presenter Huw Edwards is a regular host of the Concrete Society Awards, the annual recognition of ‘excellence in concrete’ held at London’s Grosvenor House Hotel. In 2015, he was ridiculed for lavishing praise on the sea wall at Lyme Regis, which impressed judges with its ‘exposed aggregate finish’ and the way it followed the contours of the coastline.

The presenter, who earns up to £495,000 from the BBC, also praised Glasgow’s Anderston footbridge, which used an ‘enclosed gantry system’ to extend an existing ‘partially completed concrete box girder’.

Licence fee payers may have raised their eyebrows but Mr Edwards was not put off by the public embarrassment. In 2017, he went on to host the Fleet News Awards that ‘recognise the best of the fleet industry’.

According to JLA – an agency which has many of these stars on its books – her clients found her ‘surefooted and elegant, with terrific stage presence’ when she fronted the Printing World Excellence Awards.

She also impressed at an event hosted by the risk management firm Scor, and an annual dinner for World Jewish Relief.

Another serial speaker is Steph McGovern, the BBC Breakfast star who earlier this month announced she was pregnant. Last year, The Sun reported that Miss McGovern had at least doubled her six-figure salary in 2017 by hosting 17 after-dinner engagements, including the Building Control Industry Awards, and the Catering Equipment Suppliers’ Association conference. She charges between £10,000 and £25,000, according to JLA’s website.

In February, she was named as one of the agency’s top five after-dinner speakers – loved as ‘one of the most sociable and down-to-earth hosts, often joining for dinner and chatting to as many people as she can on the night’. Miss McGovern is not the only BBC Breakfast host to boost her salary. 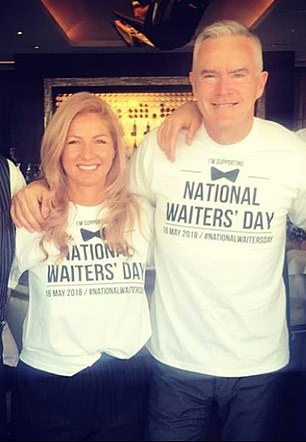 Louise Minchin and Dan Walker are also regulars on the speaking circuit despite earning up to £210,000 and £285,000 from the BBC respectively.

Walker charges up to £10,000 hosting events by the likes of Journey 9, a Manchester-based marketing services company. Miss Minchin managed to eclipse him in the glamour stakes, charging up to £10,000 to speak at an event hosted by Point of Purchase Advertising International.

Radio 5 Live host Jeremy Vine commands between £5,000 and £10,000 to present awards. The star, who is paid up to £295,000 a year by the BBC, also spoke at an event hosted by the Institute for Turnaround, which specialises in helping underperforming businesses. He appears to work harder for his money than some stars, and is often praised by clients for doing thorough research rather than recycling well-worn speeches.

She charges up to £25,000 for hosting awards events. She tends to go for more glamourous occasions, including the UK Jewellery Awards, the Annual Vue Awards, the 2016 GQ Food and Drink Awards and the 2016 British Association for Screen Entertainment awards, according to the Great British Speakers Agency. Miss Daly is willing to front ceremonies that are a little more down-to-earth given the right price tag. In 2015, she and her husband Vernon Kay collected an estimated £37,000 to host the inaugural British Takeaway Awards.

Lauren Laverne, the Radio 6 Music host and Desert Island Discs presenter, is another speaking circuit regular – collecting up to £25,000 for glamourous gigs such as the 2017 Design Week Awards bash and the magazine publishers, Mondiale Publishing.

A gushing review on the JLA website says that she is so reliable, ‘production teams seem to breathe a sigh of relief when they find out the “lovely Lauren Laverne” is in charge.’