He led the BBC’s weather team for almost two decades, so it’s a bit of a surprise to find Bill Giles urging viewers to watch the forecast on another channel.

Nonetheless, he has branded the BBC’s new graphics a ‘severe disappointment’ – and says Channel 5 offers a clearer view.

The changes come after the BBC dropped the Met Office after 94 years and introduced forecasts from private company MeteoGroup. 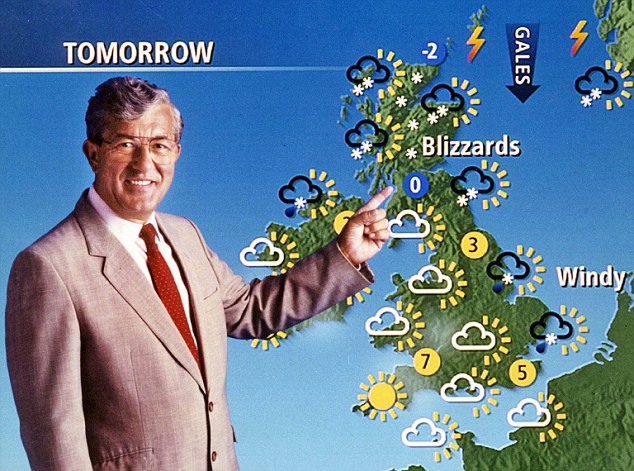 Bill Giles, pictured in 1999 with the old BBC weather map, has said on the new version the UK map appears a lot smaller

He added: ‘The new forecasts … are as disappointing as a downpour in high summer. If a forecast is supposed to give you a clear idea of what might be in store tomorrow, then the new maps, with their state-of-the-art graphics, are a severe disappointment.

‘The UK map appears a lot smaller. You may be able to see much further east into Europe … but if you want to know what is going on in, say, Southampton, near where I live, then you have your work cut out.’ Giles, who is retired, led the BBC’s weather team between 1983 and 2000. The Corporation introduced its new-look forecasts at the start of February, promising viewers a ‘better experience’, with ‘lots more data and the latest in technology and forecasting science’.

For all those lofty claims, Giles complained that the way temperatures are now indicated on the map is simply more confusing. He criticised the use of a ‘thin blue line beneath the number’ for freezing temperatures, as opposed to putting the numbers in blue. 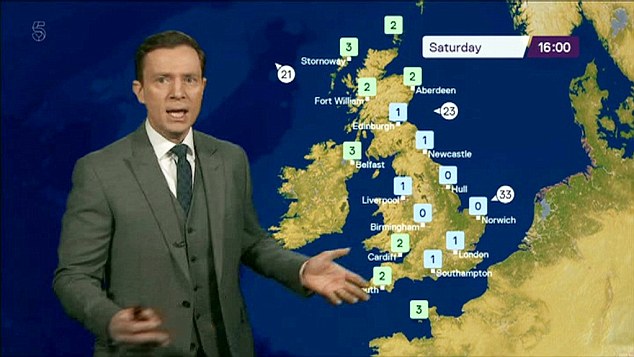 Giles wrote in Radio Times: ‘Last month the Beast from the East brought a blast of Siberian air, but if you had wanted to get a clue of how cold it would be, you had to stare very hard at the screen.’ He added: ‘On some national broadcasts we see just a list of the four capital cities with a symbol and temperature – fine for the residents of London, Edinburgh, Cardiff and Belfast. But what if you live elsewhere? If you wish to see clean clear graphics, tune in to Channel 5 just before 7pm. The only problem is that the forecast is too short.’ Giles is not alone in his criticisms of the BBC’s overhaul.

One viewer asked: ‘Why is GB so small? We don’t need to see the forecast for Luxembourg or Eastern Sweden.’

Another said large place names were obscuring details on the map. A BBC spokesman said: ‘BBC Weather has a more realistic map which presenters can customise by adding different layers of data to tell the most relevant weather story, as well as zooming in to give a more detailed forecast. We are confident that overall people will appreciate the new features.’