The BBC has announced it will hold a head-to-head televised debate between the final two Tory leadership candidates next week as they battle for the backing of party members.

All three remaining candidates have agreed they will take part in the hour-long live hustings on Monday if they make the run-off today, the broadcaster said.

The plans were announced a day after Sky News was forced to cancel a three-way debate scheduled for last night after Rishi Sunak and Liz Truss declined to take part.

The decision came after earlier debates raised concerns among Conservatives that TV clashes were damaging the reputation of the party. Instead they said they would be willing to resume when Tory MPs had whittled the candidates down to two.

The BBC plans to hold next week’s debate, entitled Our Next Prime Minister, in Stoke-on-Trent in front of an audience of up to 100 people. Broadcast on BBC One from 9pm.

A debate will be hosted on BBC One on Monday, called ‘Our Next Prime Minister’, during which the two Tory leadership finalists will go head to head 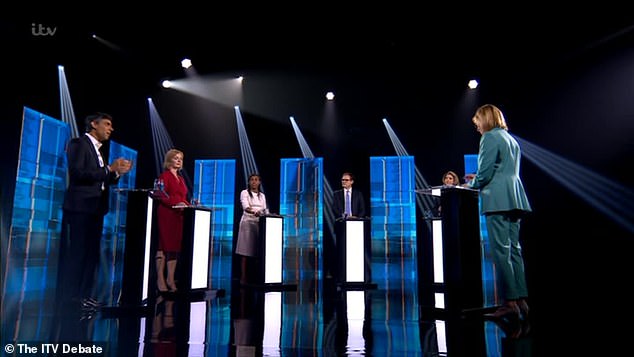 All three remaining candidates have agreed they will take part in the hour-long live hustings to be hosted by the BBC on Monday if they make the run-off today, the broadcaster said. Pictured: Rishi Sunak, Liz Truss, Kemi Badenoch, Tom Tugendhat and Penny Mordaunt (pictured left to right) clashed in the second televised Tory leader showdown, hosted by ITV

The final two will also be invited to participate in one-on-one interviews with BBC presenter Nick Robinson.

Jonathan Munro, the interim director of BBC News and Current Affairs, said: ‘We’re delighted to be offering BBC audiences the chance to be part of this pivotal moment in politics and hear, first hand, from the final two candidates as they compete to succeed Boris Johnson as Prime Minister.’

Labour has already seized on the ‘blue-on-blue’ attacks between the candidates. Yesterday it released a slick advert consisting entirely of sledging clips from the televised debates.

It is understood that the party is also compiling a dossier of all the criticism that the contenders have directed at each other.