BBC2 should broaden its appeal and not just talk to ‘posh people in the South’, the TV channel’s controller has admitted.

Patrick Holland says he will be ‘striding down a path of reinvigoration’ to extend its audience.

The BBC has warned repeatedly that young people are deserting its channels to watch online streaming giants such as Netflix and Amazon.

The communications watchdog Ofcom said this year that youngsters were more familiar with YouTube than with the BBC.

But Mr Holland insisted he would not stop at trying to extend BBC2’s his reach to a younger audience.

He added: ‘The more modern we make the channel, the more we serve the whole audience rather than just posh people in the South.’

He promised to produce ‘challenging’ content ‘unashamed of complexity’.

Ofcom also warned that the BBC and other public-service broadcasters were neglecting older women and audiences outside London.

In a report, it said: ‘Older women, young people, people living outside London and people from ethnic minority backgrounds feel less satisfied with public service broadcasters than do other audiences.’

Mr Holland’s comments in Broadcast magazine come after he announced last month that BBC2 would run a five-part series on Margaret Thatcher charting the ‘seismic social history of modern Britain’.

The series would also explore the ‘controversial figure’s rise and fall’, he said.

At the other end of the scale, the channel has also been home to the drama Versailles, which is to be axed after three series following a slump in viewers amid criticism that the show was too sexually explicit.

Regarded as one of the BBC’s raunchiest, it portrayed group sex sessions as well as substantial nudity.

Of his pledge to keep viewers interested, Mr Holland told Broadcast: ‘You misread BBC2 if you think it has to be like eating muesli. It doesn’t.’ 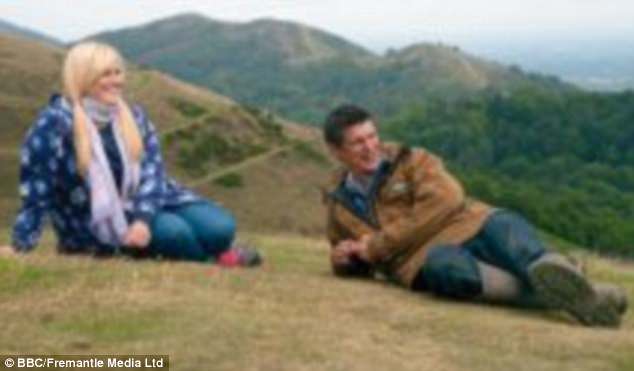 Pictured: Stars of BBC Two’s new series of Love in the Countryside

Launched in 1964, three years later the channel became the first station in Europe to broadcast in colour.

In the past the channel has been home to the likes of Fawlty Towers and Delia Smith’s cookery shows.

Only last month, Mr Holland spoke of his disbelief that some regarded BBC2 as ‘stuffy, comfortable or complacent’.

Instead, he said he saw it as the ‘first TV outsider, the first to question the mainstream, the first with a mission to be unorthodox’.

Mr Holland, who took over as controller last year and is thought to earn £215,000, also pledged to focus on its ‘unorthodox DNA’.

The documentary Hospital, one of the first commissioned by Mr Holland when he took the role, offered a previously unseen view into life inside the NHS. He described the show as ‘shocking but life-affirming’ and ‘difficult – but honest’.