Cult BBL hero Adam Zampa is one of a number of players ruling out a game on Christmas Day in the future, insisting it is ‘out of the question’.

Playing a match on Christmas Day – something that is a common occurrence in the USA – has long been floated for the BBL, and players have responded with their strongest indication ever that they will move heaven on earth to make sure it doesn’t happen.

The 30-year-old Melbourne Stars skipper and limited-overs specialist for Australia was at the helm for his side’s loss to the Sydney Sixers at the SCG on Boxing Day, and was open in his hatred of any future BBL matches on Christmas.

Melbourne Stars skipper Adam Zampa, pictured bowling in his side’s loss to the Sixers on Boxing Day, has emphatically ruled out a push to have a BBL match on Christmas

‘I don’t really want to play on Christmas Day,’ Zampa emphatically told reporters after the game.

‘Our schedules are hectic enough as is, particularly for the Stars. Obviously the Boxing Day Test is on so we’re not in Melbourne, we’re away quite a bit this time of year.

‘To add in a Christmas Day game would be out of the question.’

That’s despite the fact BBL cricketers now make a very healthy living, with the top earning well into the six figures out of less than two month’s work.

And the fact that a very healthy crowd of more than 7000 people attended the NBL’s Christmas Day game between the Kings and Melbourne United.

It went so well the NBL is reportedly considered making it a double-header next year.

Given the scheduling and limitations by indoor stadiums, it is fair to say the BBL is more widely consumed across Australia than the 10-team basketball league that relies, like the NBA, on game saturation. 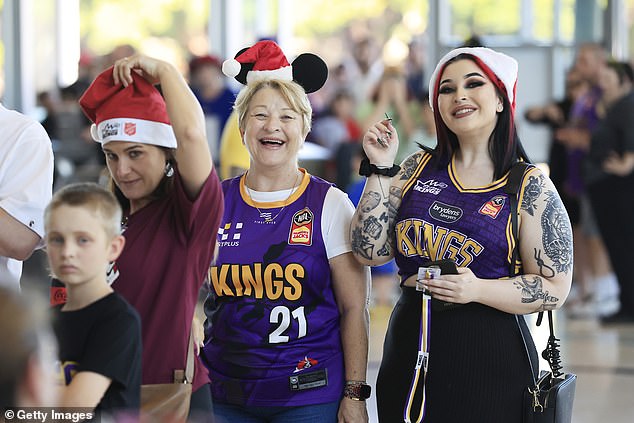 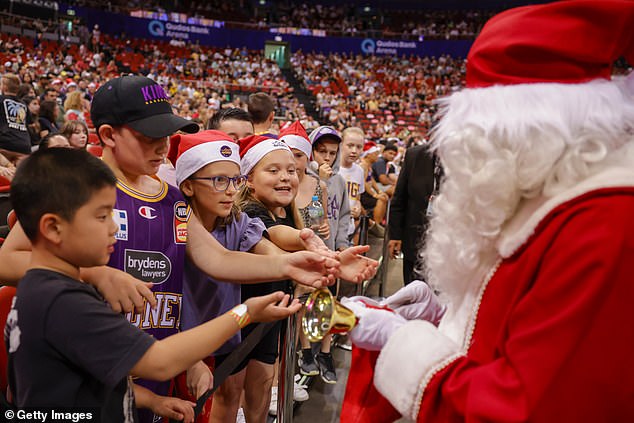 Santa Claus also made an appearance on the Kings v United match on Christmas, which was a hit with the kids

So a Christmas Day match would be a boon for Cricket Australia as they look to secure big money for TV rights.

Negotiations have turned tense as broadcasters look to save money on what they see as a dwindling product in terms of quality and popularity.

Sixers captain Moises Henriques, who was Player of the Match on Boxing Day against Zampa’s Stars, had a brutal retort for any thought of using NBL’s successful pilot as a blueprint for future BBL matches on Christmas.

‘I didn’t even know basketball played on Sunday, so that’s news to me,’ he laughed after guiding the Sixers to victory.

‘I’m glad I didn’t play on Christmas Day, that’s for sure.’ 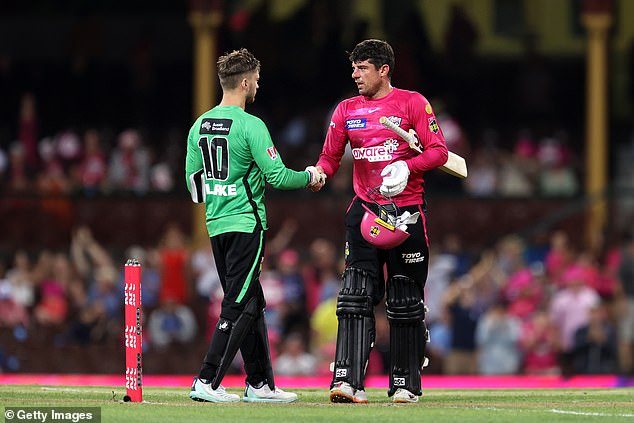 Moises Henriques (right, pictured after he guided the Sixers home) was Player of the Match for his quick-fire 50 in his side’s win over the Stars on Boxing Day

The 35-year-old did admit there might be a commercial case, and even had a helpful suggestion for organisers who were considering it.

‘The money-making machine that Cricket Australia is, whatever they think is good for the game (is what we should do),’ said Henriques.

‘More often than not, the players get right in behind it and give it our best shot.

‘I’d say if it is Christmas Day, I hope we use our brains and use Christmas Day as a local derby somewhere like a Melbourne-Melbourne game or the Sydney teams so that guys don’t have to be away from their families on a day like that,’ Henriques said.

Taking a different tack to Zampa, Henriques understood the reality that BBL cricketers make a lot of money, and this should be open to letting the organisers that pay them take the reins. 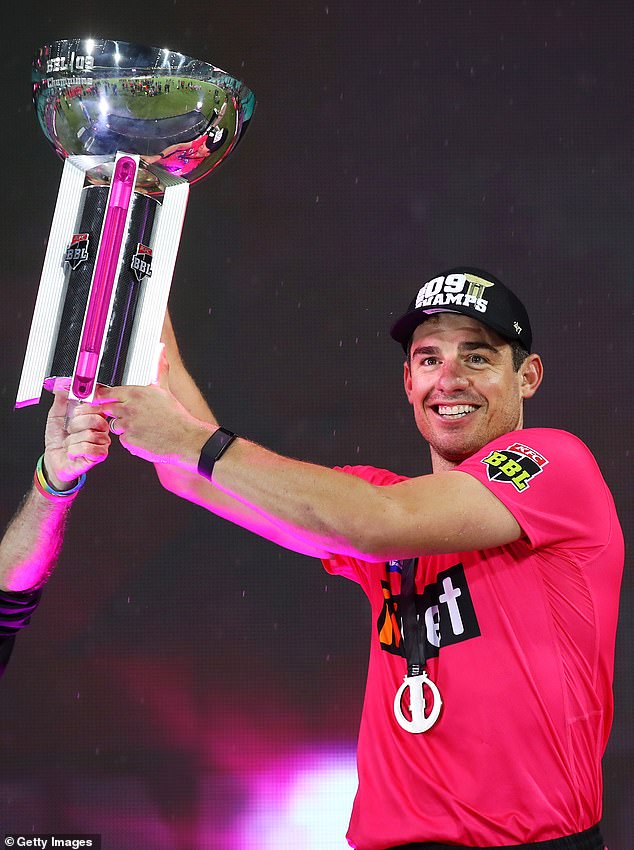 Moises Henriques lifts the 2020 BBL trophy for the Sixers. The veteran is realistic that a Christmas game may be a reality for players

However the Sixers skipper said while it wasn’t a major sacrifice for players given they are making plenty of money, it would be asking a lot of stadium staff, caterers, security and broadcasters to be away from their families.

Christmas has been the final frontier for cricket.

Boxing Day is, of course, reserved for the biggest Test of the year, while the BBL is played every other day including Christmas Eve and New Year’s Eve in the hectic summer schedule.

But the non-stop nature of modern cricket means players rarely get to spend time with their families, and it’s why Zampa is so opposed to the idea of playing on Christmas, which Cricket Australia CEO Nick Hockely said the governing body was certainly considering.

The hectic schedule is one of the reasons why T20 specialist Marcus Stoinis did not travel to Sydney for the game on Boxing Day; instead choosing to stay in Perth to be with his family ahead of Thursday’s match against the Scorchers.

Veteran Nathan Coulter-Nile also sat out of the game to spend time recouping with family, and Zampa defended the decisions to allow them to rest in the face of a wave of criticism. 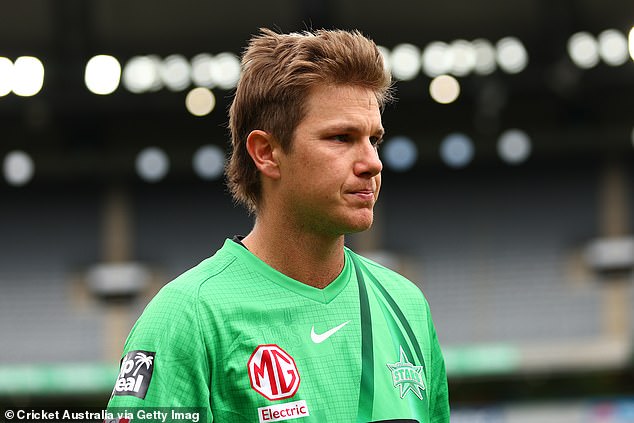 ‘I’ve taken Christmas Eve games off as well just because we do travel a lot,’ he said.

‘It’s a long 14 game season and you do want guys coming in feeling fresh and at their best. Sometimes it’s just not the case.

‘If you’re travelling the world trying to see your family on the other side of the country and coming back four hours later to try to play a game, it is about managing bodies, particularly guys like ‘Coults’ and ‘Stoin’ who have had issues with their bodies.’

The Sixers will look to use their momentum when they take on Renegades on Wednesday, while Zampa and his Stars, who sit second-last on the ladder, will look to turn their season around against the Scorchers on Thursday.