BOSTON (AP) – The Washington Wizards came back from a big deficit to force one overtime, then outlasted the Boston Celtics in the second OT.

Bradley Beal scored 34 points, including four in the second extra period, and the Wizards rallied from 20 points down to beat the short-handed Celtics 125-124 on Wednesday night.

“It tested who we were as a team,” Beal said. “They came out and played a lot harder than we did the first half. I definitely credit my teammates. We did a good job of staying poised and battling.”

Jayson Tatum missed a 3-pointer just before the buzzer that could have won it for the Celtics, who were without six players and missed several opportunities to put away the Wizards.

“It was definitely a roller-coaster ride. It was like two games,” Washington coach Scott Brooks said. “Give them credit, they came out and clawed and scratched and made a bunch of shots.”

Otto Porter Jr. finished with 18 points and 11 rebounds. Markieff Morris scored 20 points, Ian Mahinmi added 14 and Tomas Satoransky had 10 points for Washington, which played the night before but still had enough energy at the end to rally past the weary Celtics.

Boston patched together a lineup without All-Star point guard Kyrie Irving (knee) and center Al Horford (illness), two of the four regulars who were sidelined.

“It’s tough, going into double overtime and coming up short. I feel like there were times we should have pulled away with it,” said Terry Rozier, who had 21 points and nine assists for Boston.

Marcus Morris led Boston with 31 points and pulled down nine rebounds, but made a costly defensive error in the closing seconds of regulation. Tatum scored 19 points for the Celtics.

Tatum drew a foul on a layup to tie it at 115 with 3.1 seconds left in the first overtime, but missed the foul shot.

Beal missed a 3-pointer with 5 seconds left in the fourth quarter that would have tied it at 106, but the Celtics knocked the rebound out of bounds and the Wizards had one more chance. Porter took the inbounds pass and drove toward the basket passed it out to Jodie Meeks, who was alone in the corner when Marcus Morris cheated into the lane to stop Porter’s drive.

Meeks made the open 3 to force overtime.

“It’s a tough one. We had a lot of chances to win,” Morris said. “I put that on me for just committing to the ball, knowing that they needed a 3 and they kicked it out and made a great play. That was my bad.”

Washington had a chance to seal it late in the first overtime after a bad pass by Tatum led to a turnover with 16 seconds left and Washington up 115-113. However, the Wizards did the same thing on Markieff Morris’ inbound pass with 8.8 seconds left and Tatum ended up tying it with a layup.

Tatum also drew a foul on the play, but missed the foul shot that would have put the Celtics up by a point with 3.1 seconds left.

“At one end it seemed we had the game under control and then they go on a little five-point run or whatever it was and vice versa,” Porter said. “They had us down 20 and came roaring back. It’s good to come out with a win on these type of games where you feel like you kind of stole one.”

Celtics: At Orlando on Friday night. Washington Wizards center Ian Mahinmi dunks during the second half of the team’s NBA basketball game against the Boston Celtics in Boston, Wednesday, March 14, 2018. The Wizards won 125-124 in double overtime. (AP Photo/Charles Krupa) 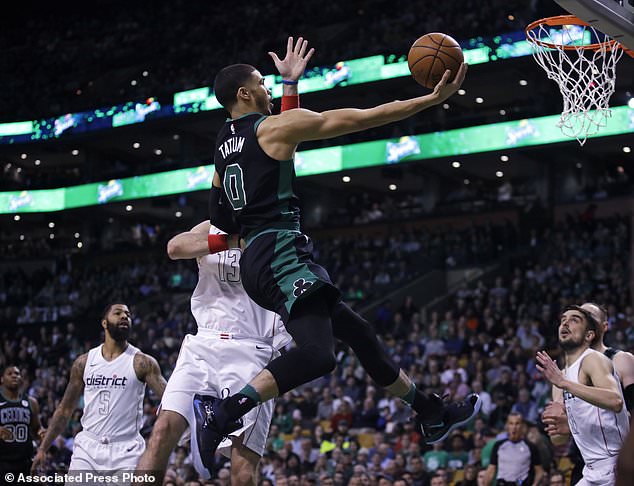 Boston Celtics forward Jayson Tatum (0) drives to the basket against the Washington Wizards during the first quarter of an NBA basketball game in Boston, Wednesday, March 14, 2018. (AP Photo/Charles Krupa) 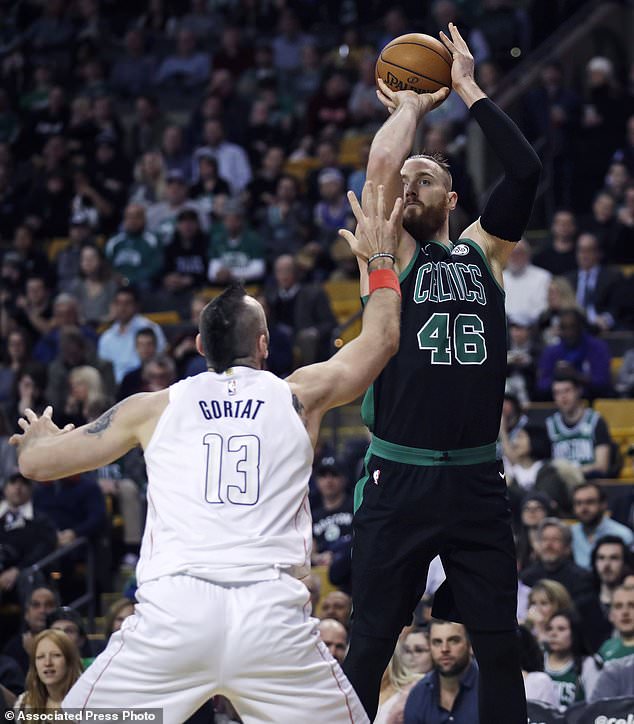