Smarter than your average bear! Creature breaks into a parked pickup truck and makes off with a picnic basket in Colorado

A remarkable video shows the moment a bear in Colorado opened the door of a parked pick-up truck and made off with a picnic basket.

The hungry animal pulled a cooler from the truck to stand on so it could reach its meal before quickly dashing away.

It even opened the door handle itself while standing up on its hind legs.

The video was shot through the window of a nearby building and shows the bear strolling up to the parked pickup just outside, clearly smelling it out as the location of its next feast.

Despite the front window of the truck remaining open, the famished animal stands up on its hind legs to peer through the back window for a few seconds before pulling on the door handle and pushing the door back.

Crawling into the back of the truck, it brings a cooler crashing to the floor and spills out all its contents but then cleverly uses it as a boost so it can reach further inside the vehicle.

The bear is seen rustling about for a short time on the backseat of the truck before quickly jumping out with a picnic bag in its mouth.

It then makes a dash for the trees where it can eat its lunch in peace. 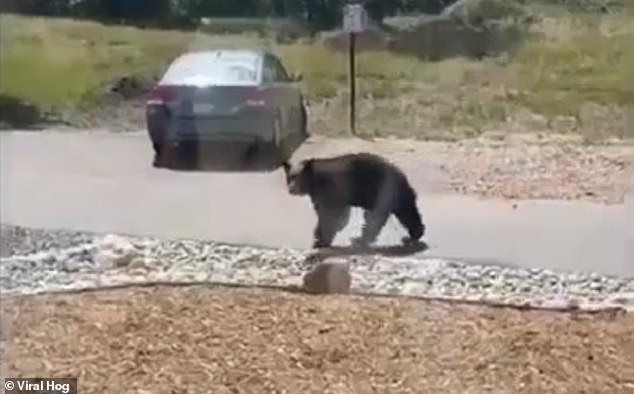 Video footage of the theft was taken from a nearby building 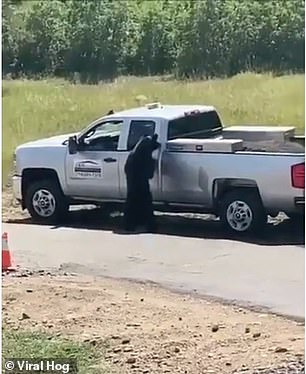 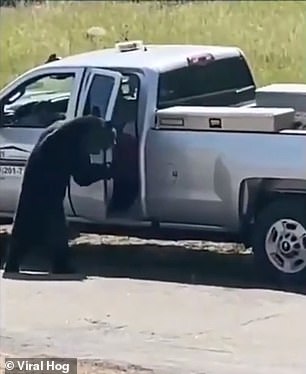 Bears on the prowl for their next meal in Colorado often target cars and other parked vehicles, knowing that nearby hikers could have left their post-exercise food there waiting.

This year, however, local wildlife authorities are warning that climates changes are leading bears to rely more heavily on human food sources and its leading to more bear deaths. 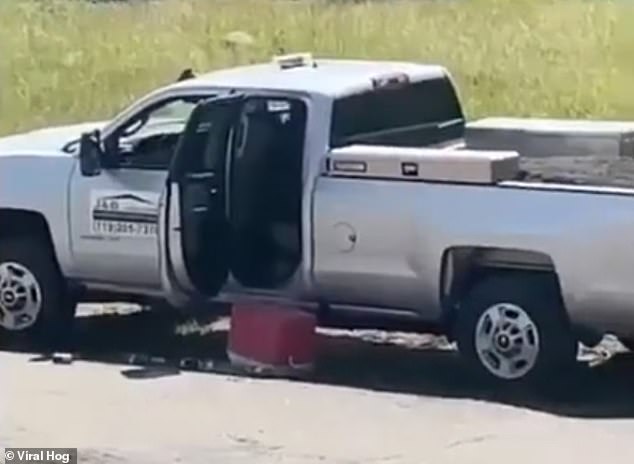 Not able to teach the food, the pesky creature pulls down a cooler to stand on 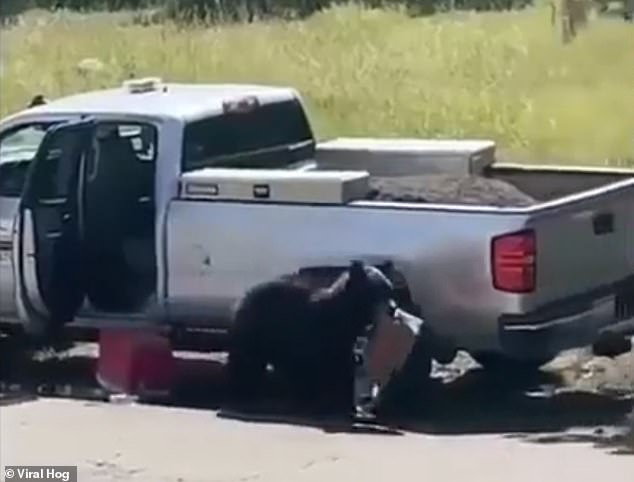 In 2019, there were several reports of cars in Estes Park, Colorado, being decimated as the animals came out of their winter hibernation on the hunt for food.

Kenna Pittman received the fright of her live when she woke to find her Ford Focus destroyed by a bear who was still trapped inside.

‘It just destroyed the whole inside. I came running in and I was like ‘come down here fast quick’,’ she told KDVR.

‘I was scared. I was just freaking out because I know what they can do and at that time I just pulled my hand away and I came inside and called 911.’

Colorado Parks & Wildlife warn not to leave your car unlocked as bears can open doors using the handle.

They have used the trick as they hunt out food quickly when they first emerge from hibernation.

‘Lock your cars, close windows, do not leave anything with a scent inside (food, wrappers, cups, sunscreen, chap stick, etc.),’ they advise.