Bear cub with bucket stuck on his head rescued from tree

An abandoned bear cub was rescued from the top of the tree after roaming a Canadian lakeside area for four days with a plastic bucket container jammed on its head.

The cub was spotted by Trevor Buchmann from the deck of his home on Kenogami Lake, Ontario, after locals had failed to catch him for nearly a week.

Mr Buchmann, 46, from Kenogami, and his friend Greg Elder rescued the cub after climbing up the tree to encourage it come down.

The black bear fell into the lake but was brought back to shore to have the container, believed to be a protein powder tub, taken off his head.

He had first been spotted by locals on July 15 and the men followed instructions from Greg’s veterinarian aunt, who had rescued bears before, over the phone.

The bear cub was rescued from a tree on Kenogami Lake, Ontario, after he got his head stuck in a plastic bucket and was abandoned by his mother

In the video, Greg reaches out to touch the bear, later christened Kenny, who is near the base of the tree, but the cub runs up the trunk in fear.

Greg climbs up to the top of the tree to try and reach the cub with a large stick, but the bear evades him, getting to one of the lower branches hanging over the lake.

The cub jumps into the water and swims away from Trevor, who is waiting in the lake, back to the shore.

Trevor catches the bear and the men put a blanket over his head and put him in a cage before taking the bucket off and feeding him some frozen strawberries. 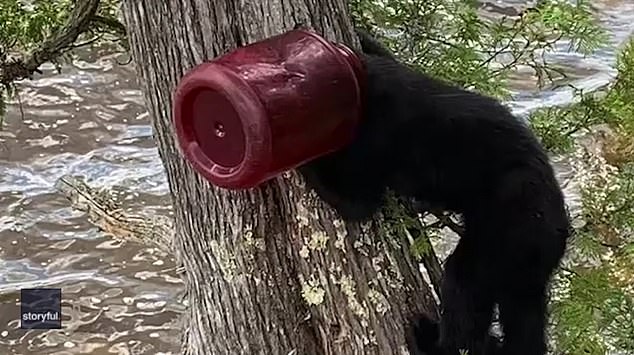 The black bear cub climbed up the tree, followed by Greg Elder, who was taking instructions from his veterinarian aunt who had rescued bears before

The footage taken on July 19 was shared by Trevor the following day with the caption: ‘A black bear cub has been on the loose, abandoned by mom with a bucket on its head since at least Wednesday.

‘Yesterday it found its way to our place and my friend Greg Elder and I managed to get the bucket off its head and it took some kibble and strawberries.

‘Later Derek Elliot, from the MNR, came and took the cub overnight and today he will travel to Bear With Us, outside Huntsville, where he will overwinter before being released in the North again next spring.

‘He’s called Kenny now, for the lake we knocked him into in order to catch him.’

Kenny was taken to Bear With Us Centre for Bears, a specialised rehabilitation centre in Sprucedale, Ontario, on July 20 after staying in a kennel overnight on Sunday. 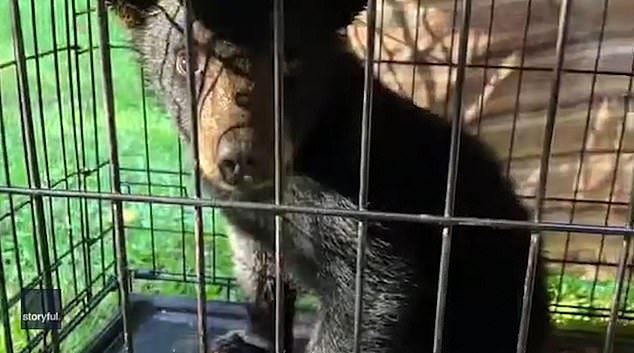 The bear fell into the lake but was rescued by Trevor Buchmann, 46, who put him in a blanket, removed the bucket and calmed him down in a dog kennel with some frozen strawberries

Trevor told CTV News he had been on his deck when he spotted the bear.

He said: ‘I looked over the edge and saw the big red bucket and realized it was a little bear cub.

‘It was exhausted and it hadn’t eaten and it was scared. We had some fresh-picked frozen strawberries.

‘So the bear got a whole bunch of our frozen strawberries.’

Kenny is the second bear in a month to be found with a bucket on his head in the area.

The cub will be released back into the wild after he is introduced to some of the other orphaned cubs at the rehabilitation centre.