This is the startling moment a bear drops down from a balcony after trying to break through a window into a terrified family’s home.

The incident took place in the town of Calliano, in the northern Italian region of Trentino-Alto Adige Sudtirol and the videos were shared by the town’s Mayor Lorenzo Conci.

The mayor said that the bear had appeared in the centre of the town and then climbed up onto the first-floor balcony.

Luca Tezzele, 27, heard something walking on his balcony while he was watching TV at around 10pm on May 5. 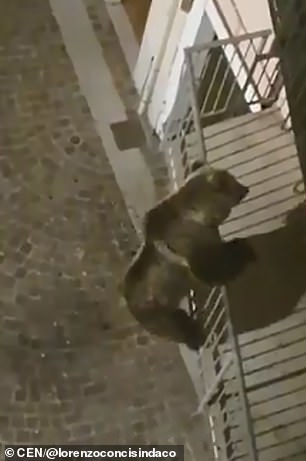 In the video, the bear is filmed as it climbs over the railings (left). With surprising dexterity it then hangs from the balcony as it lowers itself down (right) before dropping onto the ground and running away. It happened in the northern Italian town of Calliano

When Luca walked into the kitchen to check out the noise, the bear appeared outside the window and smashed the glass, trying to break in.

Luca said: ‘I ran into my room and locked myself in, after shouting out that there was a bear. Later, some people came to the rescue but the bear was already gone.’

In the video, the bear is filmed as it climbs over the railings. With surprising dexterity it then hangs from the balcony as it lowers itself down before dropping onto the ground and running away.

Although Italy has gently started to ease its lockdown many towns are still quiet,  which may have encouraged the animal to venture into the built-up area.

Conci told local newspaper Agi he had been ‘at home and some people called me’ so he drove to the scene.

He said he was about to get out of his car when somebody shouted at him to stay inside. He added: ‘Two seconds later I saw it crossing in front of me. It was exciting, I had never thought I could see a bear walking around Calliano. 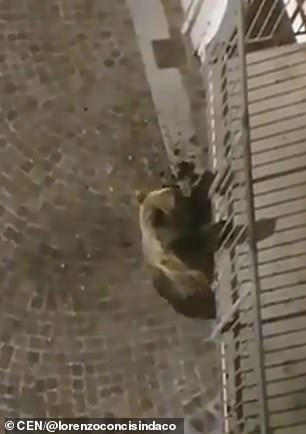 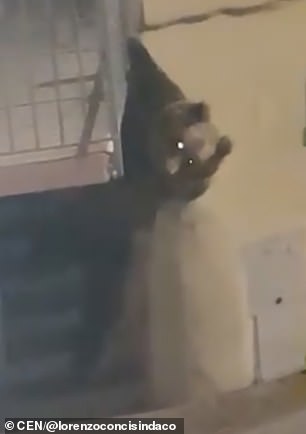 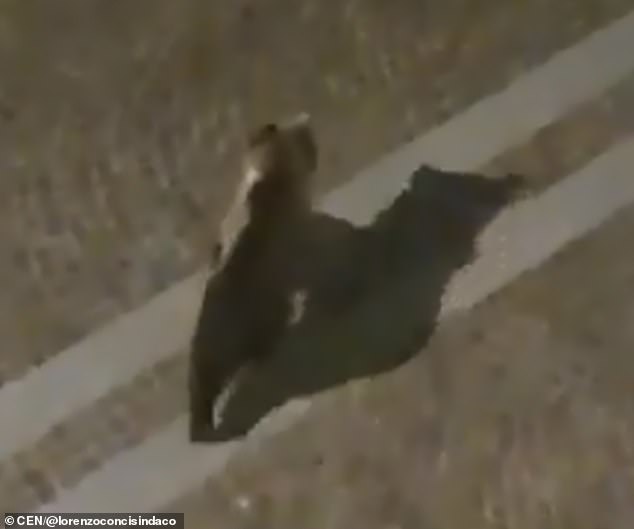 After the bear dropped down from the balcony it ran away (pictured). When forest rangers arrived there was no sign of the animal

‘But that a bear is trying to get into a house, breaking a window on the second floor with people inside is terrifying.’

Local media reported that forest rangers went to the scene but they simply calmed the local residents down as the bear was seemingly no longer in the area.

The authorities in Trento province said the bear was young and in a ‘roaming’ phase which allows it to walk for long periods of time.

Scientists are analysing some fur samples from the bear collected at the scene to be able to identify it.

Local media report the bear was also seen in the nearby town of Nomi.