‘I show my scars with pride’: Beauty queen who used to self-harm and went on extreme diets after becoming obsessed with unrealistic Instagram images reaches finals of Miss England

A beauty queen who used to self-harm and had problems with food showed her scars with pride after reaching the finals of Miss England.

Lucy Krogdahl, 19, of Little Chalfont, Buckinghamshire, started hurting herself aged 14 after feeling as though she was a failure.

Provoked by unrealistic slim body images on Instagram, Ms Krogdahl was going to the gym three times a week and eating very little.

But the 19-year-old, who now raises money for charity and gives talks in schools about mental illness will feature in the Miss England finals this week after being crowned Miss Lincoln, the Daily Mirror reported.

At the Miss Lincoln pageant on Wednesday, during the swimsuit round, Ms Krogdahl had the courage to show off her scars.

She told the Mirror: ‘I almost backed out of the swimsuit round of Miss England because I was so concerned about my scars.

‘Then I started to think, “They are part of me and I shouldn’t hide that.”

‘I don’t have anything to be ashamed of and I hope I can give that message to others if I win the title. I want people to be inspired by my story.’

Ms Krogdahl wants to join the Royal Air Force as a medic after she finishes her degree in biomedical science at the University of Lincoln.

She said she started self-harming because her ‘control freak’ nature left her ‘worrying all the time’.

Things got worse when she measured herself against women she had seen on social media.

The beauty queen said she was following ‘fitness influencers and celebrities’ because they looked ‘perfect’ and as though they led the ‘ideal life’.

By the time she was 15, Ms Krogdahl had dropped from nine stone to an unhealthy seven-and-a-half.

Her mother Lorna, 45, and stepdad Mick, 59, were told by someone about Ms Krogdahl’s self-harming and extreme dieting. 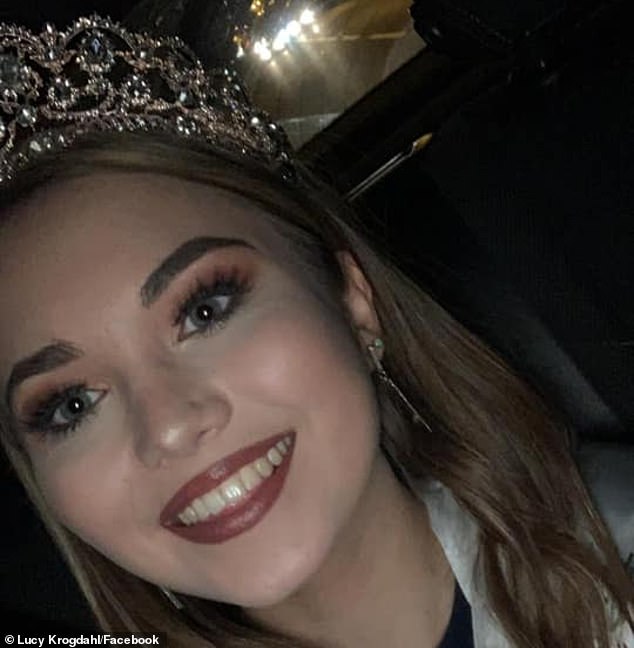 Lucy Krogdahl, 19, of Little Chalfont, Buckinghamshire, started hurting herself aged 14 after feeling as though she was a failure

She saw a counsellor at school and was referred to the NHS’s mental health service for children and adolescents.

The Miss Lincoln winner had stopped self-harming within a year and covered up most of her scars with a tattoo featuring bees, lavender and peony flowers.

She credits the Miss Lincoln win with helping her get through her food issues.

The teenager only entered the pageant after being spotted by a talent scout outside a gym.

She said that being on stage was ‘nerve-wracking’ but she was encouraged by her mother and friends.

Ms Krogdahl now gives talks at schools in Buckinghamshire and has raised more than £700 for charity by rowing the equivalent of a crossing across the Channel on a rowing machine.