Beauty salons gear up to reopen TODAY with Perspex screens

Beauty salons, nail bars and tattoo shops in England are opening for the first time in four months today as part of the latest relaxation of lockdown restrictions.

It means face waxing, eyelash treatments, make-up application and facial treatments should not be provided due to the much greater risk of transmission.

This has led to accusations of ‘sexist’ rules because beard trimming is allowed, with the ban on other treatments making it financially unviable for some salons to reopen.

Only services that do not involve work in the highest risk zone – directly in front of the face – will be made available to clients, meaning facial treatments (bottom left), eyebrow threading (bottom centre) and make-up application (bottom right) is banned. From today, Britons can get manicures (top left), beard trimming (top right) and bikini and leg waxing (top centre) 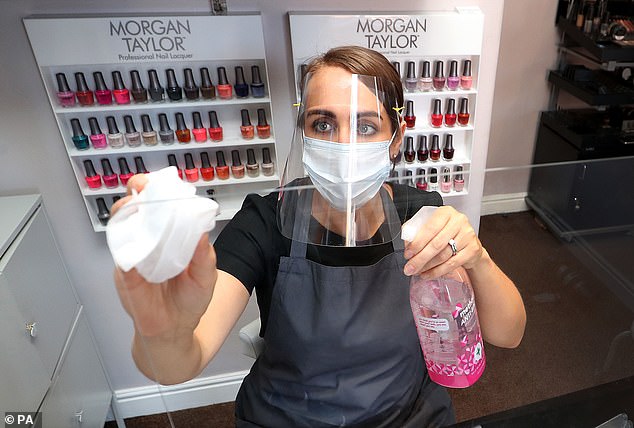 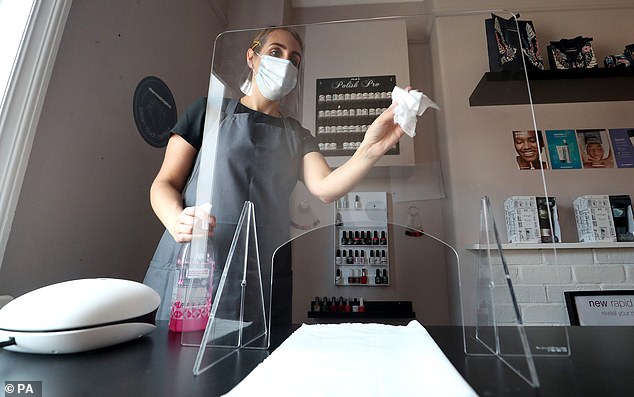 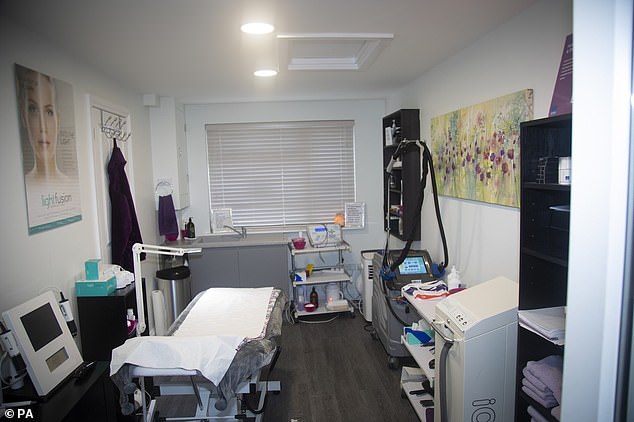 Fiona McIntosh, co-founder of London-based home beauty service Blow ltd, said the situation was hugely frustrating despite the salons being allowed to reopen.

Speaking about certain treatments still being banned, she told Radio 4’s Today programme this morning: ‘We still don’t know when we’re going to be able to do those services, which is having a huge impact on the freelancers who work for us.

What you CAN’T get:

What you CAN get:

‘We have 250 women freelance beauticians on our freelance platform across London, Manchester and Birmingham who can’t work and they have been given no date on when they can work.’

Speaking after it emerged some forms of beauty treatment would not be allowed, Vanita Partim, founder of the Blink Brow Bar walk-in beauty bar chain, told BBC News: ‘I’m furious. We can’t reopen… This will kill so many businesses. I wish they (the Government) had consulted us.’

Helen Ward, who runs Sirens Hair and Beauty Salon in Durham, told the Northern Echo: ‘I think they have given us something to shut us up and give the impression that salons are open … If we can’t do anything on the face, for me, there is no point opening.

‘People are even more upset today. The first reaction when the announcement was made on Thursday was ‘oh we can open now, it is amazing’.

‘And then 10 minutes later the details came out. The feeling of despair is ridiculous. I think it’s pure chauvinistic sexism from our government.

‘A lot of families are reliant on the beauty industry providing a wage. I am not an angry feminist, but I am this week. None of us can comprehend this.’

But a Government source told the Daily Telegraph: ‘There is a difference between a man having his beard or eyebrows trimmed, which doesn’t have to be face to face and can be done quite quickly, and a facial which might often take an hour.’

Hundreds of Britons are expected to receive long-awaited beauty treatments today after the Government gave the establishments the green light to reopen in England. 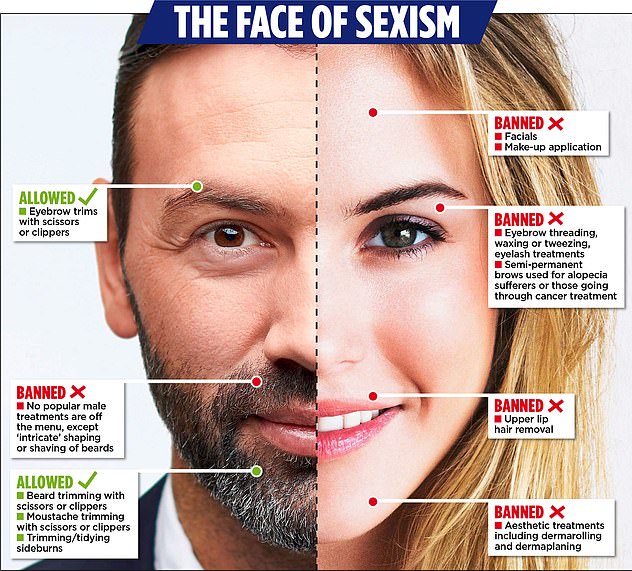 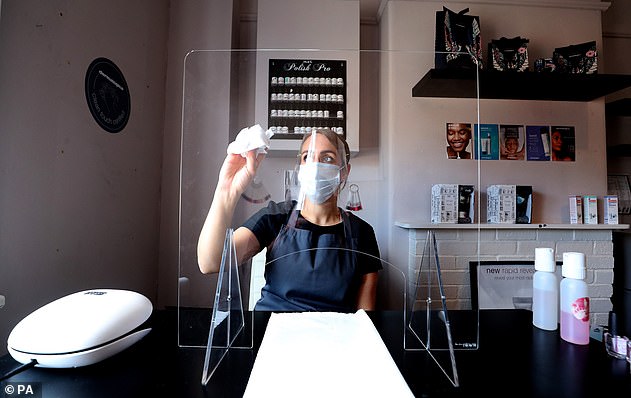 Roberta Dyer, owner of Roberta Beauty Redefined in Knutsford, sits behind a protective screen at her salon yesterday as it prepares to open its doors after months in lockdown

The move comes just over a week after hairdressers, pubs, restaurants and cafes were able to make their return on July 4, a day which has since been dubbed ‘Super Saturday’, following months in lockdown.

Q&A: What will change as beauty salons reopen from today?

The beauty sector will be the latest group of businesses in England allowed to reopen their doors from Monday as lockdown restrictions are eased.

However, many things will have changed since we were last allowed to touch up our manicures at the nail salon or have our pores pampered with a facial.

Nail bars in England are allowed to reopen today, along with beauty salons, spas and physical therapy businesses.

Tattoo and massage studios and piercing services will also be allowed to reopen their doors as well as tanning salons.

Both fixed and freelance workers have been given the green light to resume services by the Government.

Business Secretary Alok Sharma said: ‘Enabling these often small, independent businesses to reopen is yet another step in our plan to kickstart the economy to support jobs and incomes across the country.’

– What will be different?

Screens and barriers will be in place between customers and staff in many premises, with increased surface cleaning and hand washing enforced.

You will be likely to see more disposable equipment, and skin to skin contact will be avoided where possible.

The new measures will spell the end of a spontaneous treatment in many salons, as businesses are asked to consider using appointment-only booking systems to minimise the number of people on site at one time.

You will also see the end of a cup of tea with your mani-pedi, as food and drink other than water are likely to be banned.

– What about social distancing?

Customer chairs will be spread out, which may reduce the number of appointments your favourite salon can host.

If two-metre distancing cannot be maintained, for example when providing treatments, the person providing the service should wear extra protection.

This may include a clear visor that covers the face, in addition to screens and gloves.

– What treatments can I get?

Like many other businesses forced to close during the lockdown, nail salons and beauty parlours will also be offering a reduced service.

Only treatments that avoid work directly in front of the face will be allowed.

This means nail treatments, leg and bikini waxing and massages will be back on the menu from today.

-What treatments are not allowed?

Culture Secretary Oliver Dowden said there would be restrictions on ‘particularly high-risk services’ from beauticians.

As directly in front of the face has been deemed the highest risk zone by the Government, face waxing, sugaring, eyebrow and eyelash treatments, facials and make-up application will not be allowed until advice changes.

– What other changes will there be?

Businesses will be asked to keep records of customers and staff to share with NHS Test and Trace if needed.

Employers will have also performed a risk assessment to ensure their premises are Covid secure, and have been asked to display a notice to confirm this to visitors.

– What businesses are still to open?

Indoor gyms, swimming pools and sports facilities are to reopen from July 25 under recently announced guidance.

The guidance also supports the reopening of sports halls which will allow the return of sports such as badminton and volleyball.

The latest guidelines state only services that do not involve work in the highest risk zone – directly in front of the face – should be made available to clients.

It means treatments such as face waxing, eyelash treatments, make-up application and facial treatments should not be provided due to the much greater risk of transmission until Government advice changes.

In situations where the two metre social distancing measures cannot be maintained, the member of staff must wear a visor that covers their face or use a screen that protects both the practitioner and the customer.

Also on the banned list are dermarolling, dermaplaning, microblading and electrolysis on the face due to the close contact needed.

But basic treatments including manicures, pedicures, leg waxing and bikini waxing are all set to return.

During a press conference last Thursday, Culture Secretary, Oliver Dowden said: ‘Having allowed hairdressers to reopen, beauticians, tattooists, spas, tanning salons and other close contact services can now do the same, I am pleased to say, from Monday.’

‘Of course that will be subject to some restrictions on particularly high-risk services.’

Meanwhile Business Secretary, Alok Sharma said: ‘We have been clear throughout this crisis that we want as many businesses as possible to reopen, but we must be confident it is safe for them to do so.

‘From Monday 13 July thousands more businesses which offer close contact services like nail and beauty salons will be able to welcome customers back in a way that is safe for both workers and the public.

‘Enabling these often small, independent businesses to reopen is yet another step in our plan to kickstart the economy to support jobs and incomes across the country.’

The move comes after the government was urged to ensure ‘stricter enforcement’ of coronavirus rules in England after complaints that some hairdressers were failing to wear visors or ensure social distancing.

The National Hair & Beauty Federation (NHBF), which represents the industry, said it wanted the Government to ensure rules were adhered to as it was unfair on businesses that carried out their work safely.

While most are believed to be following the guidance issued to allow reopening last week, there are questions over what checks are in place to catch those failing to comply.

Some customers also appeared unsure of where to complain if they encountered problems.

Heather Sutton, a policy adviser from Alrewas in Staffordshire, said she had visited a hairdresser and been left in tears due to the lack of precautions in place.

Despite Government guidance stating that all hairdressers must wear visors, Ms Sutton claimed she was told by the member of staff cutting her hair that was not wearing one because ‘they’re horrible and steam up’.

‘I actually cried when I got out of the salon as I’ve followed every rule since lockdown and that was really my first venture out. I came home, showered and put all my clothes in the wash.

‘I have since emailed her telling her I won’t be returning and why and saying she should put her customers’ health and safety first.’

She added that she had considered reporting the salon, but ‘it would appear the guidance is not backed up with legislation, so there isn’t anyone to actually report her to’.

While rules in Scotland and Wales are based in legislation, those in England are instead based on guidance which is not in itself legally enforceable.

However, the Health and Safety Executive (HSE) has powers to fine or even imprison business owners found not to comply with the rules. 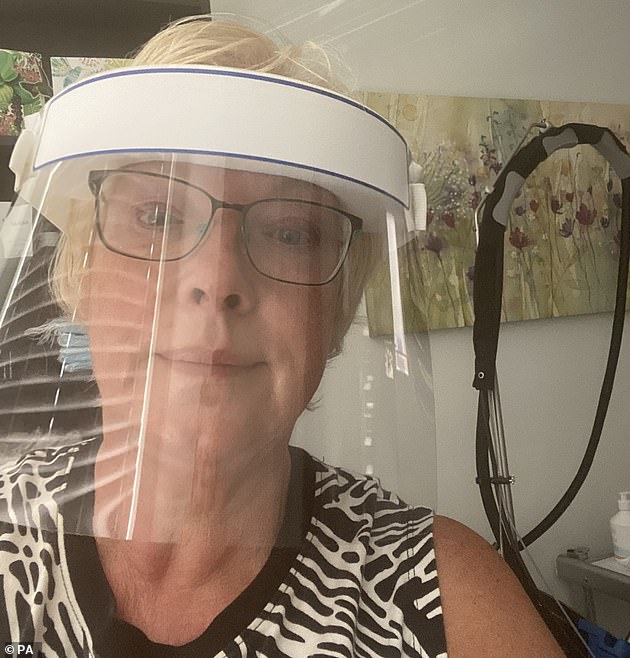 Alice Bellamy, who runs the specialist laser hair removal studio Woman to Woman & The Male Perspective Ltd in Calne, Wiltshire, has been making the final preparations at her salon 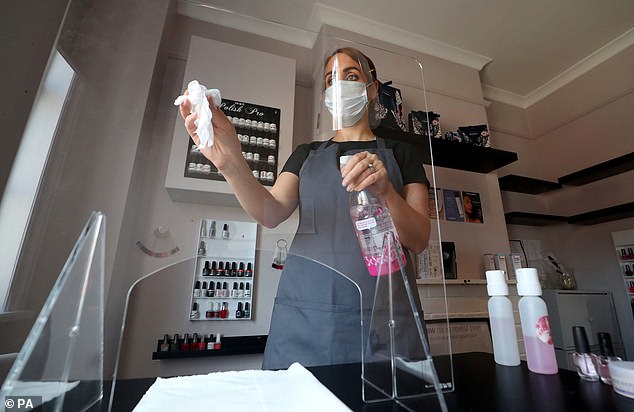 Members of the public looking to complain about businesses failing to work safely within the rules can do so via HSE or their local council, though how to do so is not always clear.

Yvonne, 41, owns a tattoo shop in the Macclesfield, Cheshire, with her husband. She said she was frustrated to see a nearby hairdresser failing to ensure social distancing between customers or wear proper protective gear.

‘They had four people obviously not related sat together waiting on a couch, no social distancing.

‘Then cutting hair, no gloves, visor or mask present on either the client or the barber.’

She added that she felt not enough was being done to make sure companies were sticking to the guidance.

‘It’s disgraceful, to be honest. To allow a sector that works so close to people’s faces to open, and then have no measures in place to enforce these new guidelines is ridiculous.’

After being contacted about the breaches, the NHBF said: ‘The National Hair & Beauty Federation strongly advises that hairdressers and barbers follow the guidance issued by the Government for England.

‘The guidelines are based on the most up to date scientific evidence. Face visors must be worn by anyone carrying out hairdressing, barbering or beauty activities.

‘The NHBF would welcome stricter enforcement because it’s only fair that all businesses stick to the same rules, which also give greater protection to the public and to the people working in salons and barbershops.’