Beauty spots and rural villages across Britain have told holidaymakers and second homeowners that they are ‘not welcome’ during the Easter weekend as many put up road blocks in a bid to deter tourists from visiting.

National parks and seaside resorts have been left deserted during what is normally one of the busiest times of the year for mini-breaks and staycations, with millions of Brits forced to stay home during the coronavirus lockdown.

However many have still flouted the rules banning all but essential travel to visit picturesque areas of the country, causing councils to warn anyone planning weekend trips that they can expect to be turned away by police.

Locals in beauty spots have even warned they would turn ‘vigilante’ to confront those visiting their second homes, causing a chief constable in North Wales Police to urge people not to ‘take the law into their own hands’.

The animosity between locals and holidaymakers blew over in Snowdonia national park today when a neighbour angrily confronted a couple staying next door who had driven 180 miles to rent an Airbnb cottage.

He chastises the couple – who it was later claimed had been made homeless before moving – in the doorstep of the property in the village of Penmachno, telling them: ‘How dare you come to this village and dare spread this? 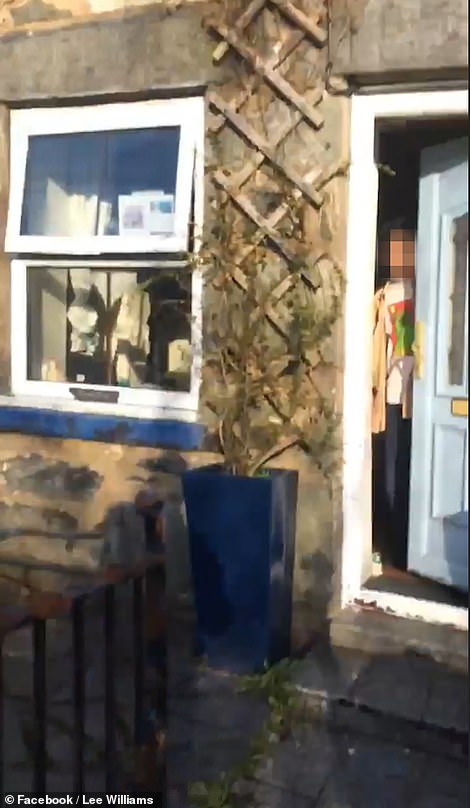 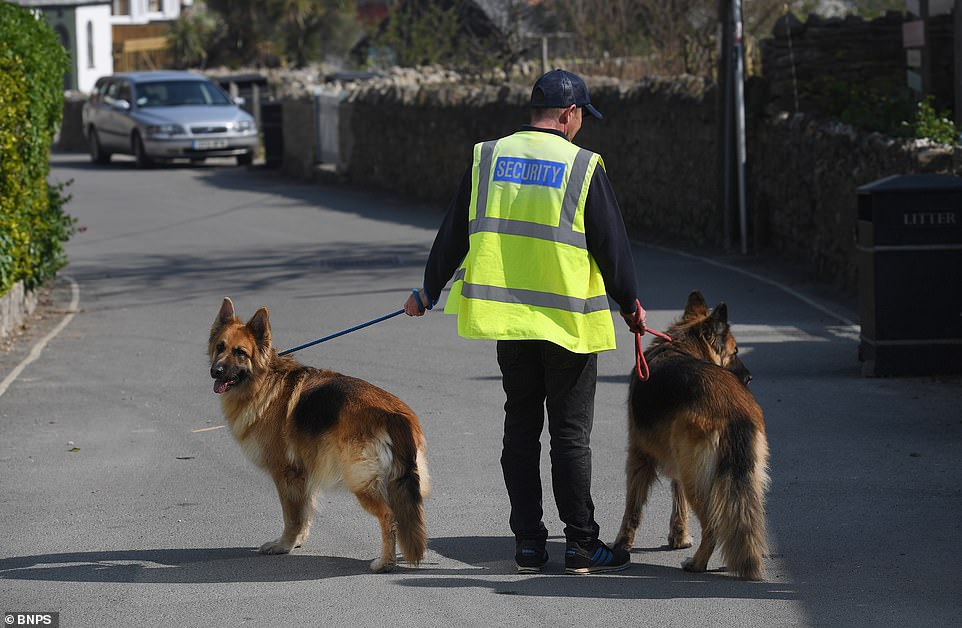 Security Chris Jepson on patrol in Lulworth Cove in Dorset, where visitors are being turned away from one of the south coast’s most popular beauty spots this Easter Bank Holiday weekend

‘There’s a lot of old people here and sick people. How stupid are you? Do you not watch the news and see people dying out there from this thing?’

It comes as Pembrokeshire Coast National Park Authority shut down popular beaches and its famous coastal path as it told visitors ‘we’re closed’.

Police in the area carried out 1,300 spot checks on drivers and sent non-essential travellers home, with nine people receiving fines after some drove more than 150 miles to visit beaches surrounding Tenby.

One driver told police he wanted to go ‘crab fishing’ when his car was stopped on the A477.

Dyfed Powys Police Chief Constable Mark Collins said: ‘My message is: We are out there, patrolling. We’ll be stopping vehicles and turning them around.

‘I’m acutely aware there are people travelling in the hours of darkness, deciding to take B-roads. We’ll be out on those B-roads.’

New Forest District Council urged people to stay well away to help stop the spread of Covid-19, as it asked for walkers, joggers and second homeowners to ‘avoid temptation’.

In Cumbria, police said they caught several people heading to the Lake District from outside the area. 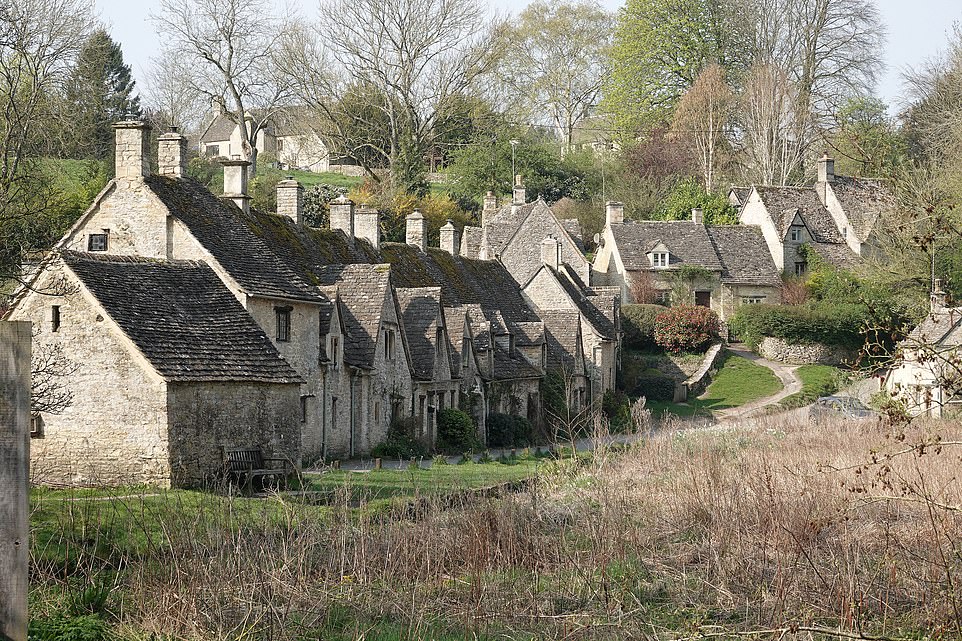 The Cotswold village of Bibury, usually teeming with holidaymakers during the Easter weekend, is deserted after it was closed to visitors today 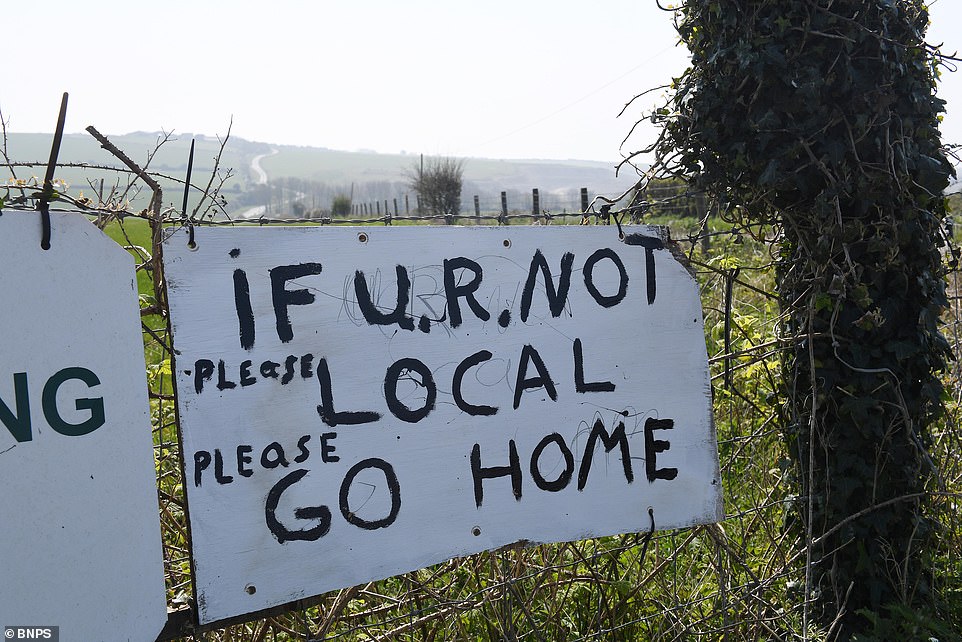 The residents of Worth Matravers, on the Purbeck coast of Dorset, say there has been an influx of second home owners since the coronavirus pandemic started 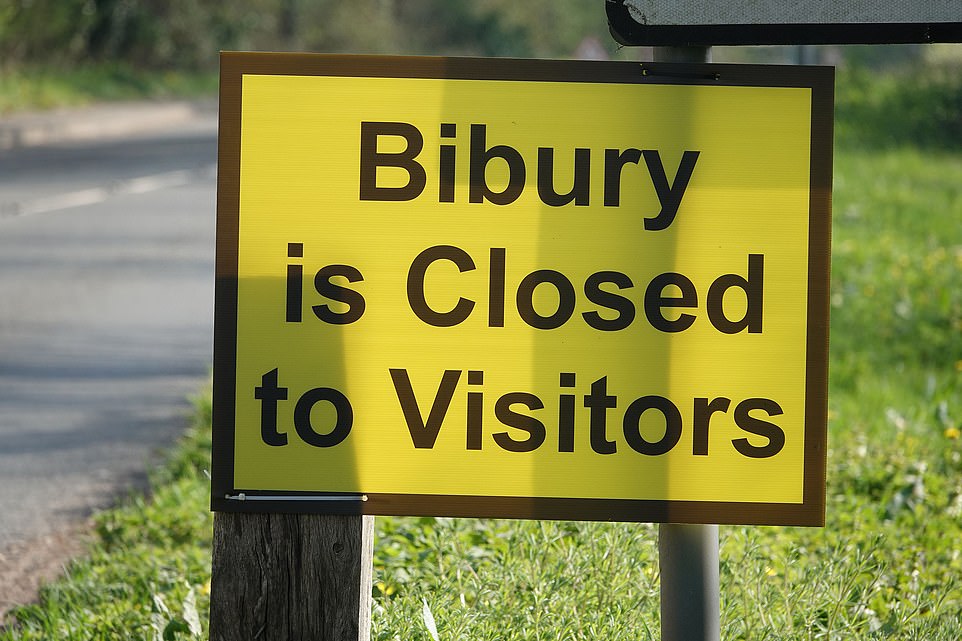 Gloucestershire Police revealed today that it had fined people for driving from Portsmouth and London to visit Bibury, near Cirencester

Officers encouraged those caught to go home, including two men from Yorkshire who ‘chose to head to Windermere for a spot of canoeing’.

At the other end of the country, John Hart, leader of Devon County Council, said police had been turning around holidaymakers travelling with caravans or motorhomes on the A38.

Further south, Cornwall Council said it had received about 200 reports from residents that holiday lets are defying the Government order to close.

Annie Willey, brand manager of the Suffolk Coast Destination Management Organisation, which represents local tourism companies, said anyone visiting hotspots over Easter was giving a ‘slap in the face’ to closed businesses.

He said there would be increased patrols at car parks and beauty spots this Easter.

Dr David Rosser, chief executive of University Hospitals Birmingham, said he was ‘nervous’ people will put pressure on the health system by flouting the Covid-19 lockdown over Easter.

He urged people to stick to the rules and not be ‘falsely reassured’ about the apparent effectiveness of measures to date.

According to an analysis of data published by satellite navigation company TomTom, there was no spike in congestion in cities such as Belfast, Cardiff, Edinburgh, London and Manchester on Thursday.

Authorities will be hoping travel figures remain low as the bank holiday begins. 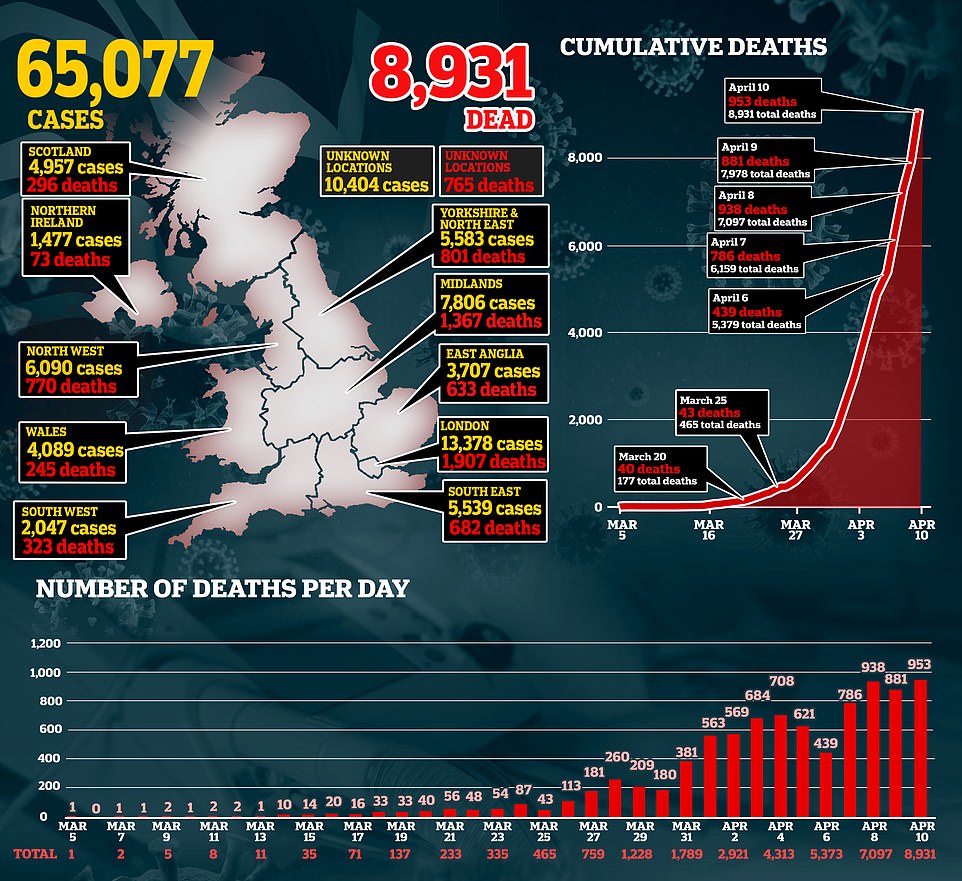 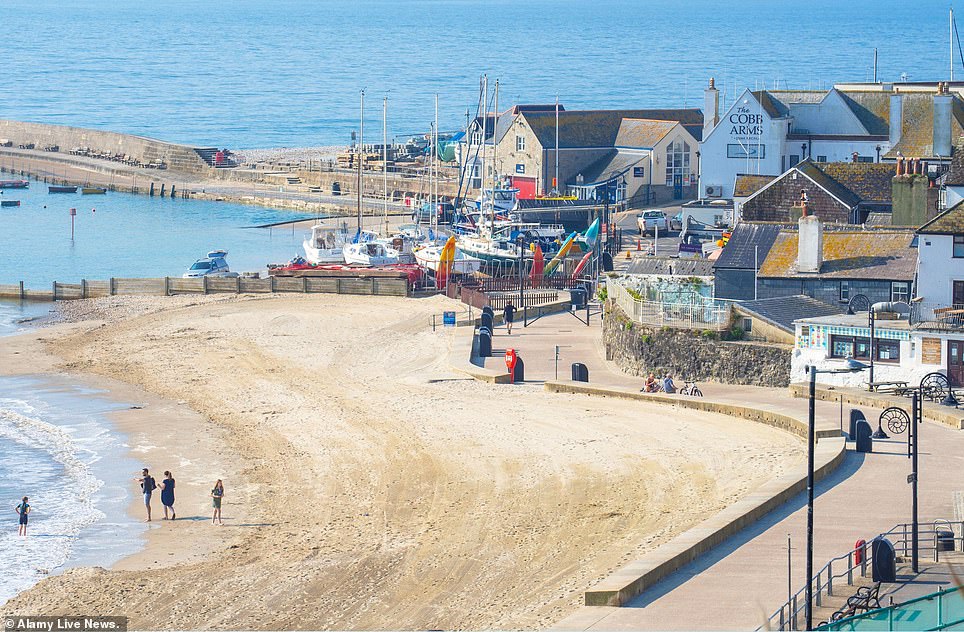 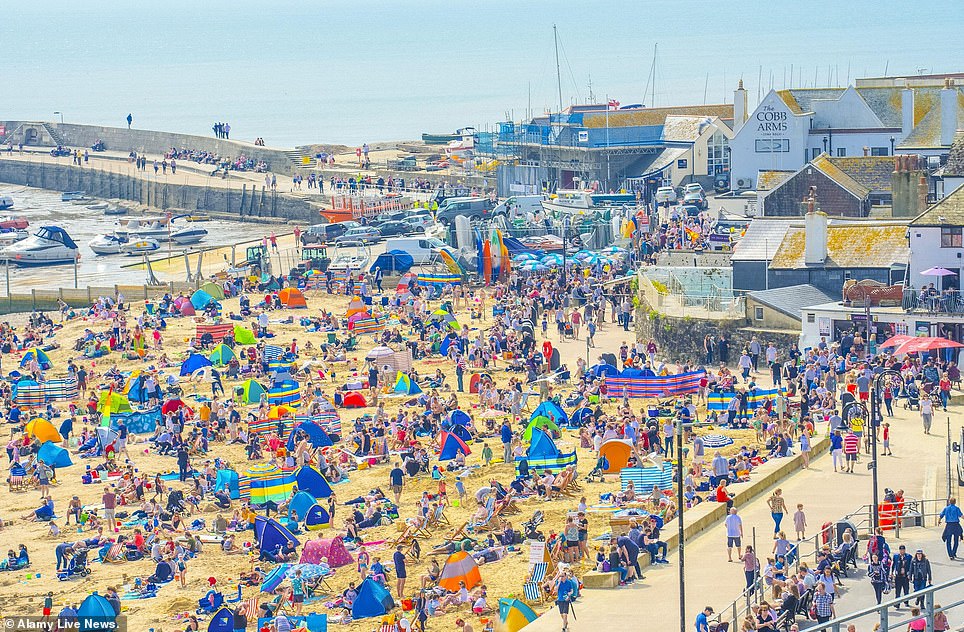 A before and after comparison shows Lyme Regis beach in Dorset, both today as it lies almost completely empty (left), and at this time last year when it was teeming with holidaymakers (right) 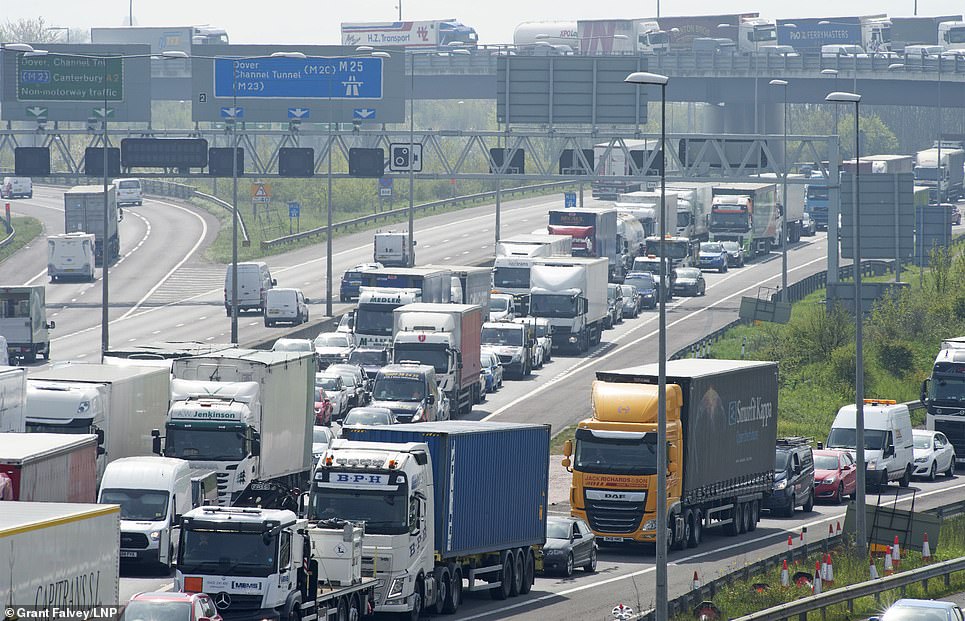 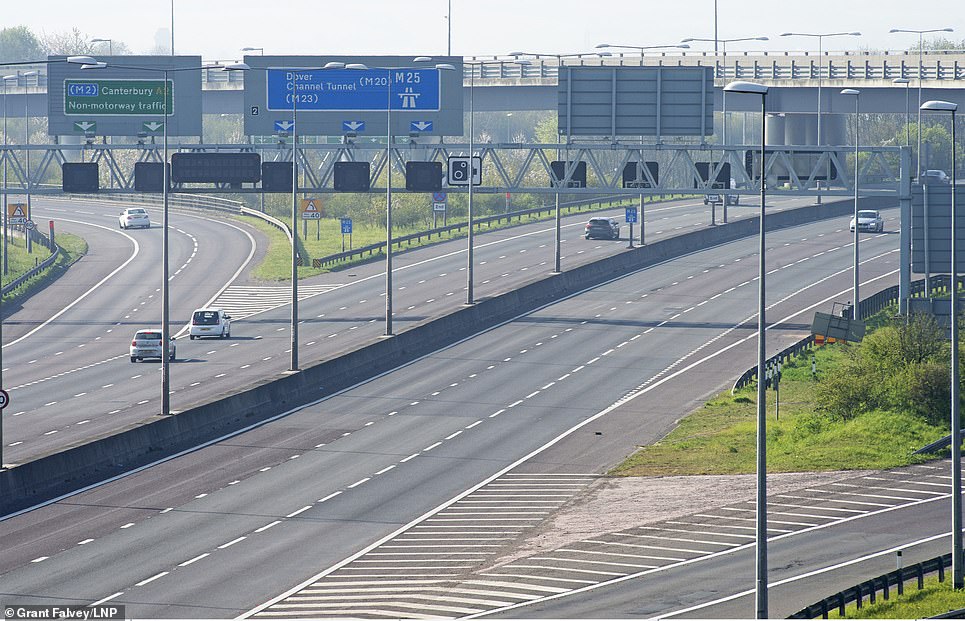 Rail companies Northern and TransPennine Express have joined forces with British Transport Police to launch a campaign reminding people it is ‘not acceptable’ to use services for leisure activities.

There will also be an increased presence of police officers at popular stations over the weekend.

For those seeking to exercise outside, national clinical director for Scotland Jason Leitch has urged them to do it near their home and for no more than an hour.

He said people should avoid long journeys and only travel by car ‘if it is unavoidable’.

Culture Secretary Oliver Dowden warned earlier on Thursday that now was not time to give up the lockdown measures.

He said: ‘The British people have really come behind this, we shouldn’t be giving up this Easter weekend, that is the number one thing.’

Emma Salter, meteorologist at the Met Office, said that Good Friday will bring hazy sunshine across England and Wales, while Scotland will be cloudy with outbreaks of rain at times.

On Saturday, temperatures in London could reach up to 26C, before conditions more widely begin to cool going in to Sunday where some heavy showers could be expected.

Ms Salter urged people to follow the Government’s advice to avoid all non-essential travel over the weekend.

She added: ‘Despite the warm weather, stay at home and only go out when you have to.’ 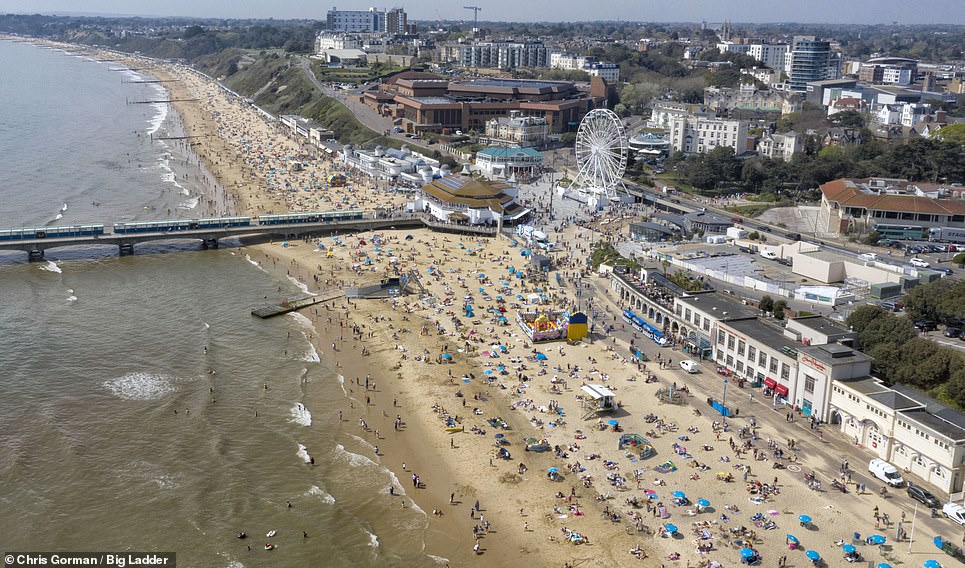 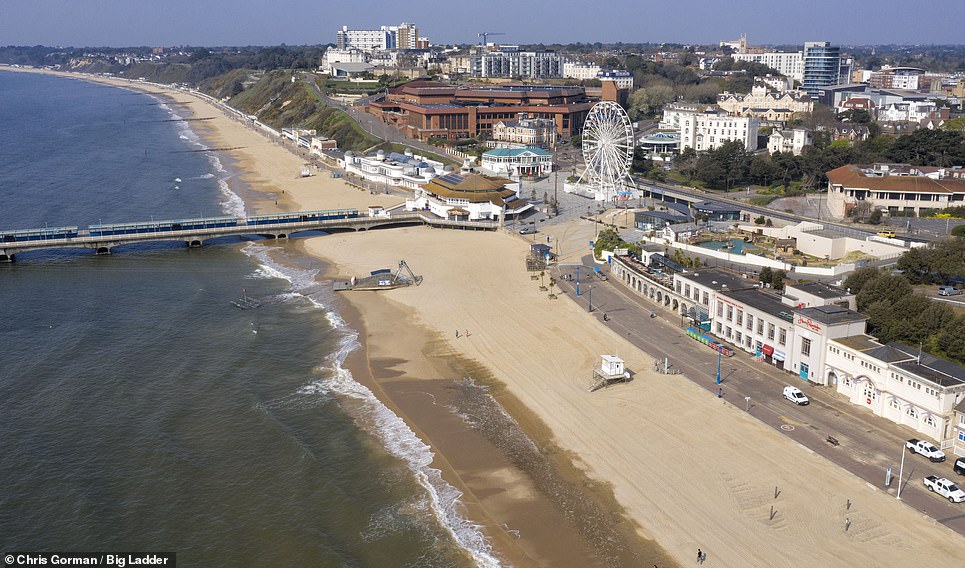