Mum-of-three Lacey, 36, decided to become a surrogate and carry her friend’s baby (pictured: Lacey and baby Niko who she carried as a surrogate)

Lacey Owen appreciates that some women are simply not cut out to be surrogates, and can not imagine handing over a baby they had carried for nine months.

But for 36-year-old mum-of-three Lacey, the joy of being able to give the gift of parenthood trumps the wrench of giving the baby away – and she learnt that the hard way.

Her first pregnancy in 2011 resulted in a miscarriage, and knew the fear of never becoming a mother.

But after subsequently giving birth three times, she remembered the vow she made when losing her first child.

‘If I’m ever given the opportunity to become a mum, I will pay it forward,’ Lacey had promised to herself and her husband Nick.

So when a gay friend and his partner approached her about being a surrogate to their child, she was delighted to say yes.

Lacey told FEMAIL about the challenges she then faced, including those she never expected, the misconceptions about surrogacy and what every woman should know before taking that step. 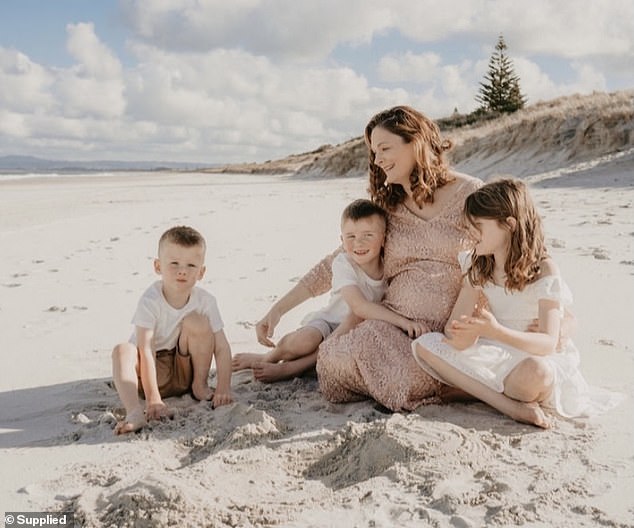 Lacey told FEMAIL about the challenges she faced as a surrogate, what she never expected, the misconceptions and what every woman should know if they’re considering becoming a surrogate (pictured: Lacey and her own three children) 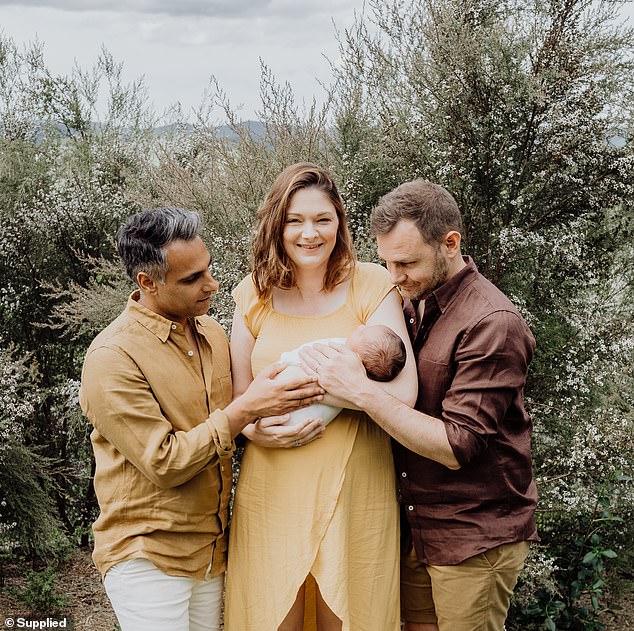 Soon after Lacey and her husband Nick agreed they had ‘finished’ making their own family, her friend Arrun Soma messaged out of the blue to ask about surrogacy. ‘It was serendipitous,’ she said (pictured: Lacey, centre, holding baby Niko, Arrun Soma, left, and his partner Jake Vollebregt, right)

‘When we knew we had finished our family my friend Arrun Soma messaged me out of the blue about his surrogacy plans – it was quite serendipitous and perfect timing,’ she recalled.

Lacey texted him back saying ‘I’d love to be your surrogate if I qualify’ and Arrun was utterly thrilled about the life-changing decision.

Lacey, Arrun and his partner Jake Vollebregt have all known each other for 10 years and Lacey felt comfortable helping them have a child of their own.

‘I’ve always been a very maternal person and loved babies; I loved being pregnant and giving birth, there was never any issues,’ she said.

What proceeded was ongoing research, testing, meetings with lawyers, couples and group counselling, and ongoing emotions.

Lacey, Arrun and Jake had group counselling and so did Lacey and Nick to discuss the surrogacy and ‘what if’ scenarios.

‘During the counselling we discussed questions to make sure we were all on the same page,’ she said.

‘We were asked all these hypothetical scenarios, like “what if we found out the baby had down syndrome, or another chromosome abnormality, would you be happy to terminate the pregnancy?”, ‘”what if I found out I had cancer six months in?”, “what if Jake and Arrun died in a car accident, who would look after the baby?”,’ Lacey said. 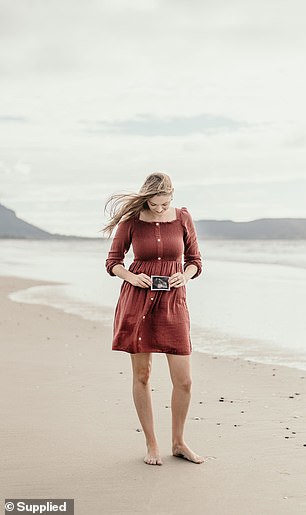 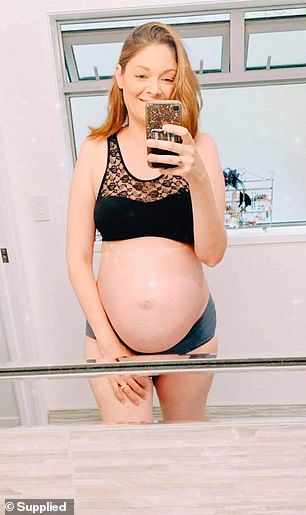 The process to receive the green light for surrogacy was full of counselling, considering hypothetical scenarios, and speaking with lawyers all before the pregnancy (left, Lacey with ultrasound image, right, Lacey pregnant)

From there they had to see a lawyer as in Australia and New Zealand it’s illegal for surrogates to be paid or receive any gifts, then the adoption process was discussed.

Under New Zealand law Lacey was listed on the baby’s birth certificate as the ‘birth mother’ with Nick as the ‘birth father’ simply because they’re married.

The surrogacy also needed to be reviewed by the Ethics Committee on Assisted Reproductive Technology in New Zealand.

‘Another thing that shocked me the most is that my husband had to sign approval that I could have an embryo transfer done – even though it was my body. This was done purely because we’re married,’ Lacey said. 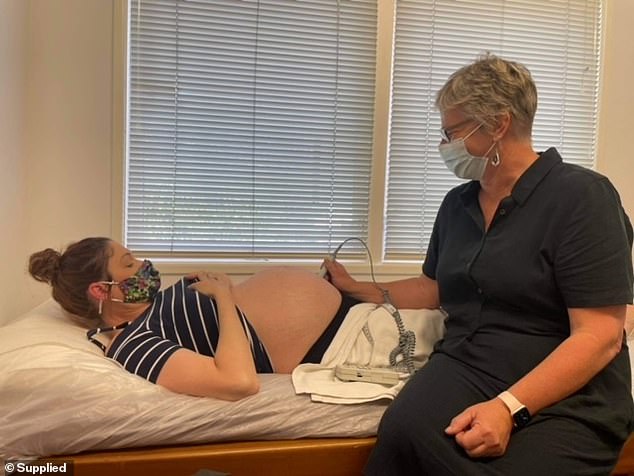 During the pregnancy she living a normal lifestyle as much as she could, didn’t change her diet and eats healthy (pictured: Lacey having ultrasound)

From there Lacey fell pregnant on the second round of IVF, but unfortunately five weeks in she had a miscarriage.

‘I felt so gutted for them, I felt quite guilty, but there was nothing I could do,’ she said, adding: ‘It was so difficult telling Jake and Arrun the awful news’.

A few months passed, then Lacey had a third and final round of IVF, and she was fraught with fear over losing the embryo.

Four days later Lacey took a home pregnancy test which showed positive, then a blood test confirmed she was pregnant.

‘It was so wonderful seeing his heartbeat during the ultrasound, and we all burst into tears,’ she said.

Much like her previous pregnancies carrying her own children, Lacey didn’t experience any troubles or difficulties, and no morning sickness.

She kept in touch with Jake and Arrun regularly who lived 10 hours away, which was difficult during Covid.

During the pregnancy she living a ‘normal lifestyle’ as much as she could, didn’t change her diet and eats healthy.

Nick also found it amusing telling others ‘my wife is pregnant with another man’s baby’.

Prior to IVF Lacey, Arrun and Jake had group counselling to make sure they were ‘all on the same page’

They were asked a range of upfront ‘what if scenarios’, such as ‘what if they found out the baby has down syndrome, would you want to terminate the pregnancy?’

Lacey said: ‘One aspect that shocked me the most was that my husband had to sign off approval that I could have an embryo transfer done – even though it was my body. This was done purely because we’re married. That was absolutely crazy.’

Then it took seven months to finalise everything through the courts until Arrun and Jake could adopt the baby off of Lacey. It also shocked Lacey that the process took that long, and now Arrun and Jake are on a new birth certificate as Niko’s parents.

It can cost thousands of dollars on legal fees, IVF and court fees to undergo surrogacy

Lacey said the biggest misconception about surrogacy is that the woman will change her mind and want to keep the baby for herself.

‘There’s a lot of people out there who just can’t wrap their head around the fact that you could carry a baby and just not want it – which is perhaps why some women can become surrogates and some can’t,’ she said.

‘I went into the pregnancy knowing the baby wasn’t mine, and even when he was born he didn’t look like my baby at all.

‘To help somebody else have children who desperately wants them has just being incredible.’

Initially she didn’t cry but 36 hours later when the hormones kicked in she couldn’t stop crying. 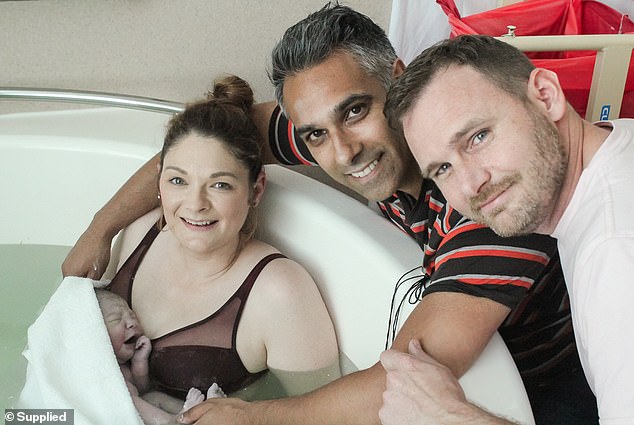 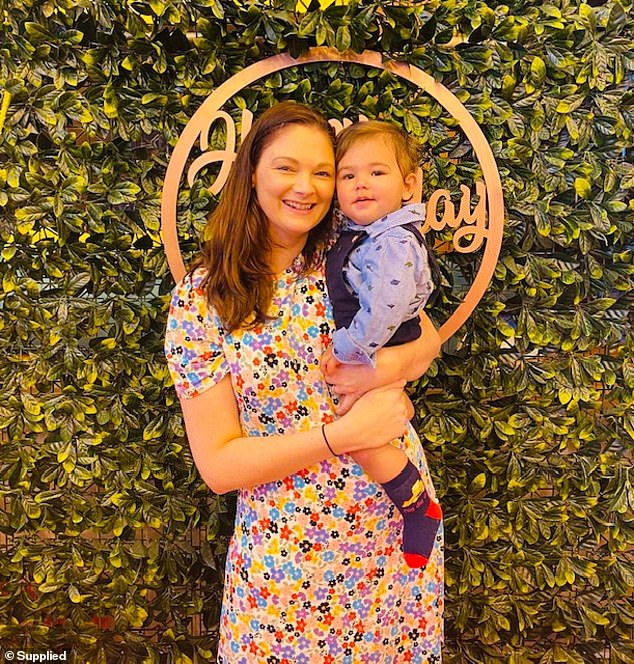 Today Lacey catches up with Arrun, Jake and Niko every now and again and she’s known as Aunty Lacey (pictured: Lacey and Niko)

Lacey took medication in attempt to stop her breast milk production from coming in, though this ‘didn’t work’.

A week after the birth Lacey, Arrun and Jake spent everyday together with Niko for a week.

‘It sounds cliche but it was a total rollercoaster of emotions because my body and head wanted a baby but I didn’t,’ she said.

‘A few months later I started to feel like myself again.’

Today Lacey catches up with Arrun, Jake and Niko every now and again and she’s known as Aunty Lacey.

What are the surrogacy laws in Australia?

In Australia, the regulation of surrogacy is a matter for the states and territories

In New South Wales, Tasmania, Queensland and Victoria any person, regardless of sex, relationship status or sexual orientation can be an intended parent

In the other States and the ACT only heterosexual married or de facto couples, or single women, are eligible

After the birth, the Intended Parents can apply to the Court for a Parentage Order in the state where they live