Friday drinkers flock to pubs on the hottest day of the year: Beer gardens are rammed as thousands ignore social distancing rules

Groups of Friday drinkers have flocked to pubs on the hottest day of the year with beer gardens rammed as thousands of people ignore social distancing rules.

As temperatures have risen across the country on what has been the hottest day of the year so far, people have been seen standing close together in pubs, contrary to recommendations from the government.

One pub in west London was flouting the social distancing guidelines with large crowds of people gathering outside in the beer garden this afternoon.

Huge groups of people gathered outside The Westbourne in Notting Hill, London, this afternoon as the temperatures reached high as 97F 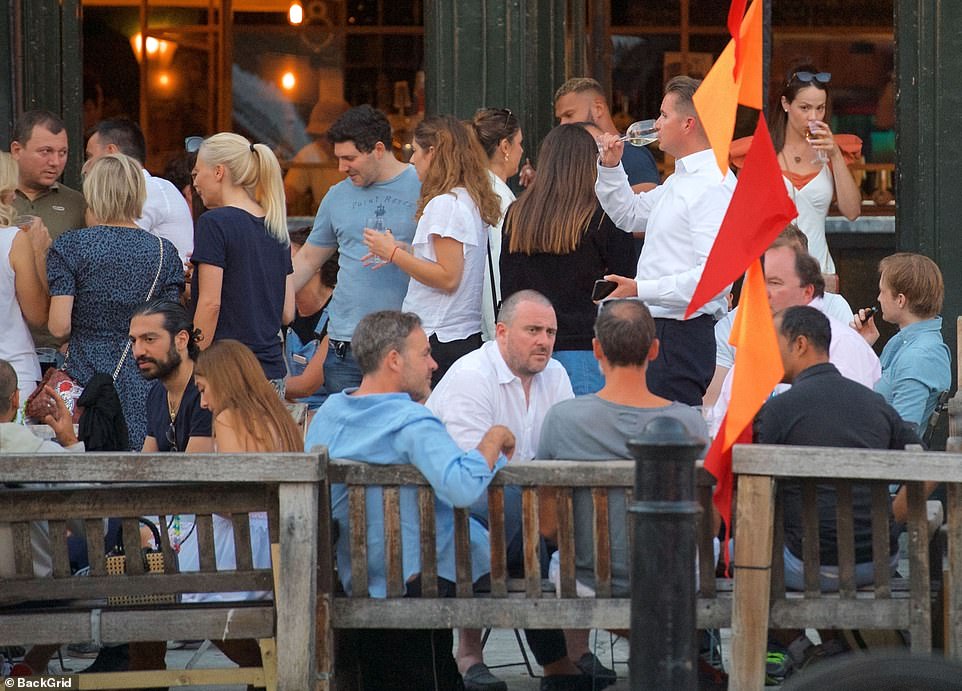 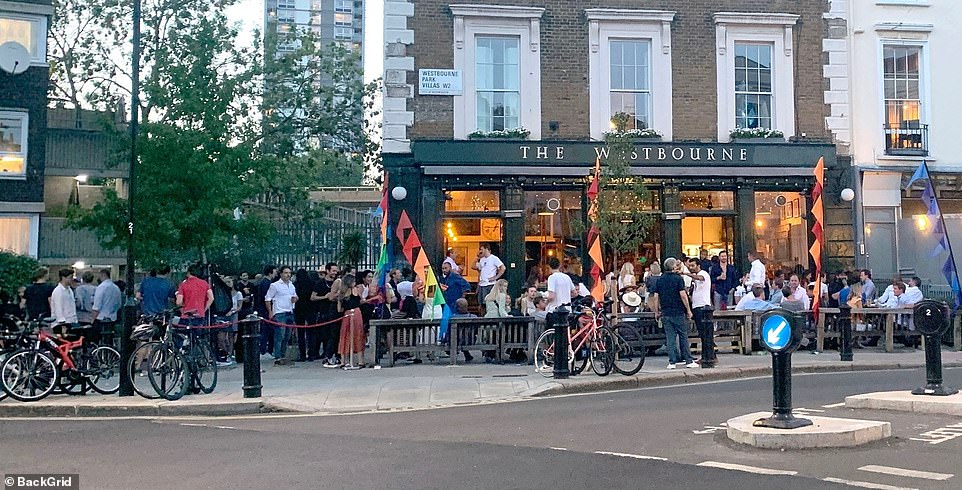 The huge group at The Westbourne pub, in Notting Hill, was spilling out into the street from the designated beer garden which has been created with red ropes and cones.

People stood chatting and drinking in the scorching sunshine seemingly unfazed by the breach of government-ordered social distancing rules.

The popular pub is often frequented by famous faces such as Lady Gaga, Rita Ora, Frank Lampard and Kelly Brook.

Elsewhere sunseekers flocked to coastal hotspots across the country again today as the temperatures reached as high as 97F. 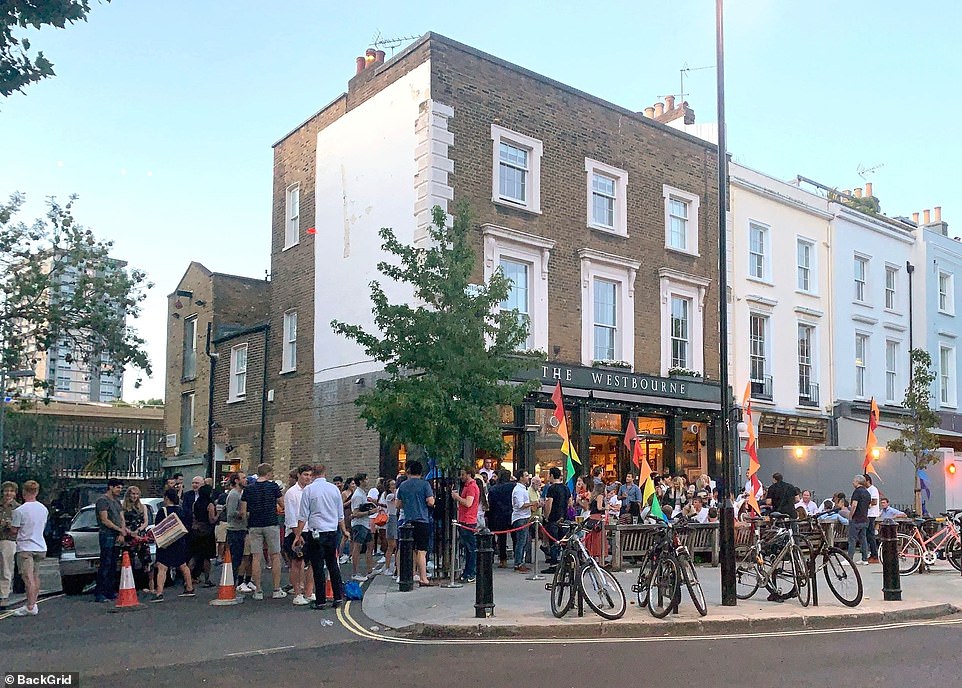 A designated area, separated by red rope and cones, was set up as the large crow of visitors spilled into the street from the seating area 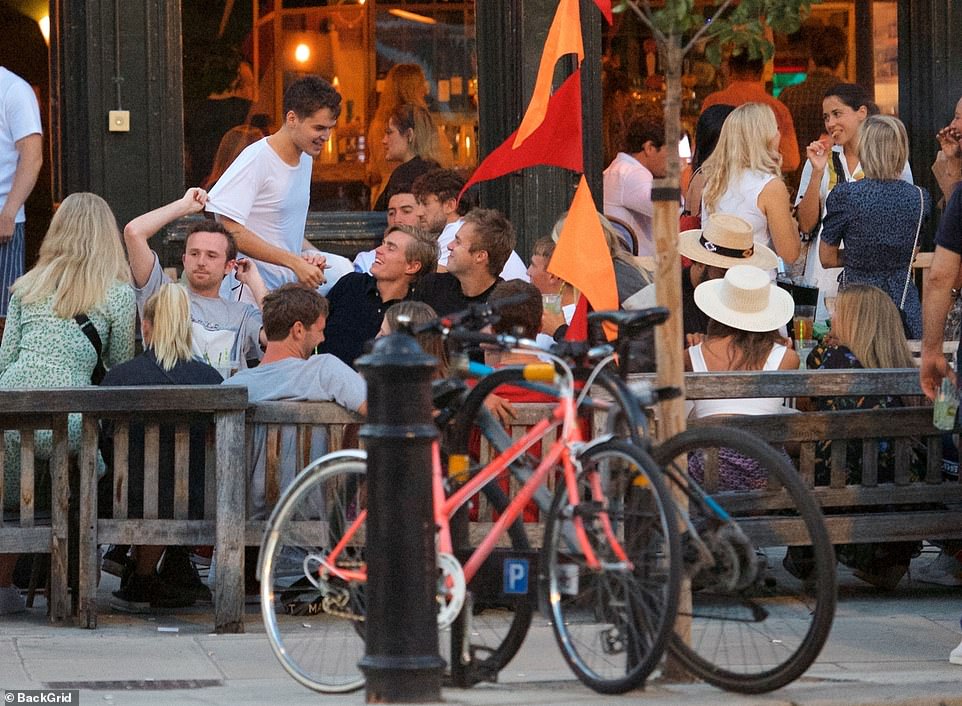 The popular pub is known to host several well known faces such as Lady Gaga, Rita Ora and Frank Lampard 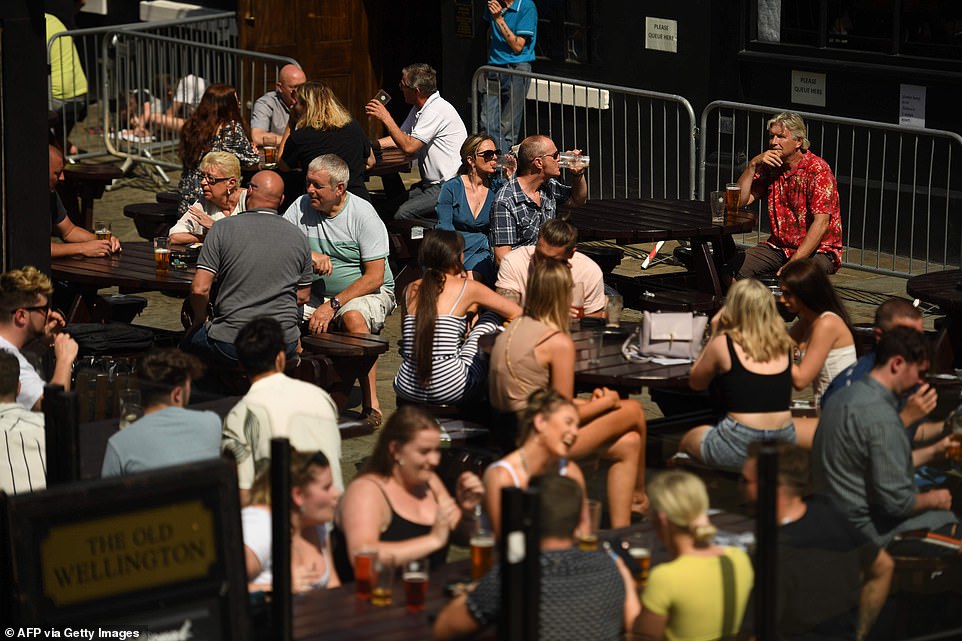 Despite the latest restrictions that were announced in the area last night, people still sat outside in the pub garden this afternoon in Manchester

Social distancing guidelines were also ignored at several popular beaches where people crammed onto the sand in close proximity of each other.

In a bid to reduce increasing traffic jams on warmer days, Brighton and Bournemouth councils urged sunseekers to stay away amid a surge to beaches across Britain today to enjoy a day out.

It comes as last night new restrictions to stop the increasing spread of coronavirus across Greater Manchester and parts of east Lancashire and West Yorkshire were announced.

Health Secretary Matt Hancock said around 4.5million people in the north of England will be banned from meeting others from different households in their homes and gardens from today.

However, households will be able to go to bars, pubs and other hospitality venues but two households should not go together, the Department of Health and Social Care confirmed.

According to the most recent figures from Public Health England (PHE) the rate of infection is increasing across 13 of the 19 local authorities in the areas where the new measures are being imposed.