Firefighters have fought desperately to stave off the death and destruction that the California wildfires have wreaked on residents, but devastating before and after images reveal just how much some have lost.

At least 31 people have died since the wildfires broke out last week and hundreds remain unaccounted for.

Firefighters are working round-the-clock to get the fires under control despite losing their own homes to the flames. 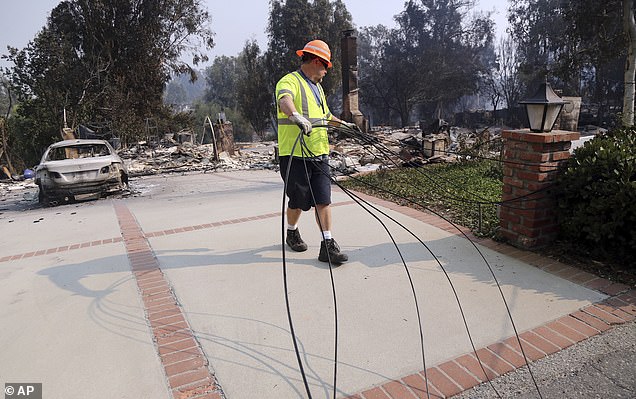 An entire home is gone after the California wildfires incinerated this Malibu home, leaving just the chimney and the driveway entryway 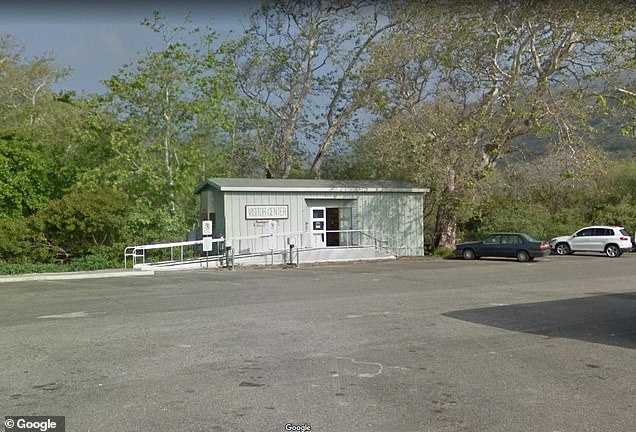 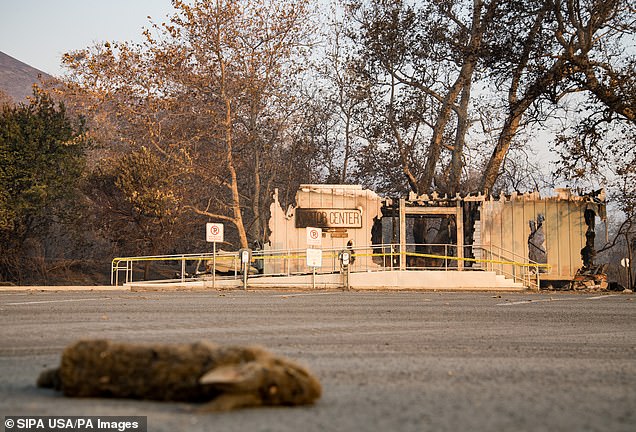 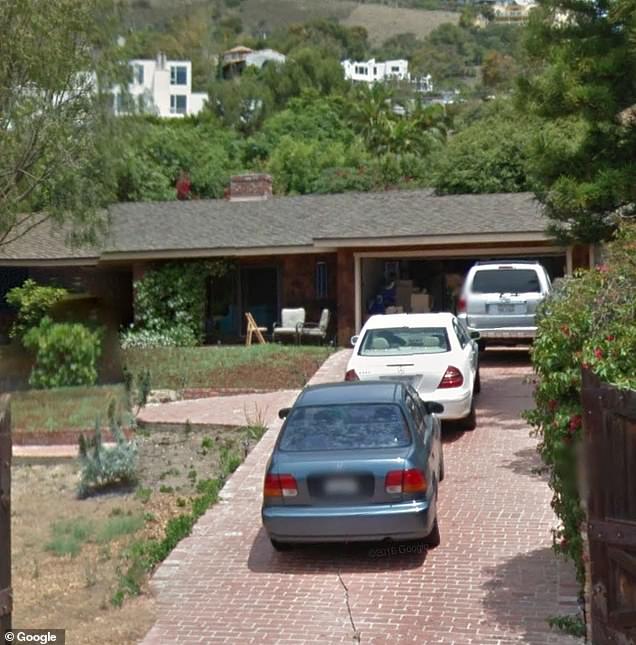 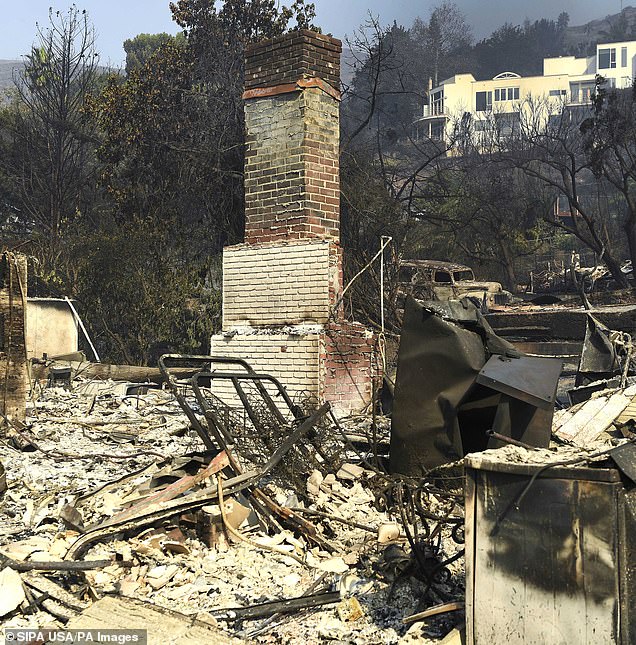 Firefighters were already battling the deadly Woosley fire, which has killed two people and is only 20 percent contained, as well as the Hill fire when two new blazes sparked on Monday.

The Lynn fire broke out in Thousand Oaks, which is still reeling from a horrific mass shooting that took 12 lives last week.

It burned 15 acres as of Monday morning but the Ventura County Fire Department said the threat to nearby structures was ‘diminishing’ as firefighters were able to ‘get a handle’ on the flames.

Meanwhile, a new blaze dubbed the Peak fire was seen burning right by the 118 Freeway in Simi Valley. It was reported around 10.30am and at least 105 acres have been burned.

Fire crews said they stopped forward progress of the flames around 1pm.

People could be seen turning their cars around and driving the wrong way on the freeway to get away from the smoke and flames. The California Highway Patrol temporarily closed part of the 118 as firefighters worked to contain the flames. 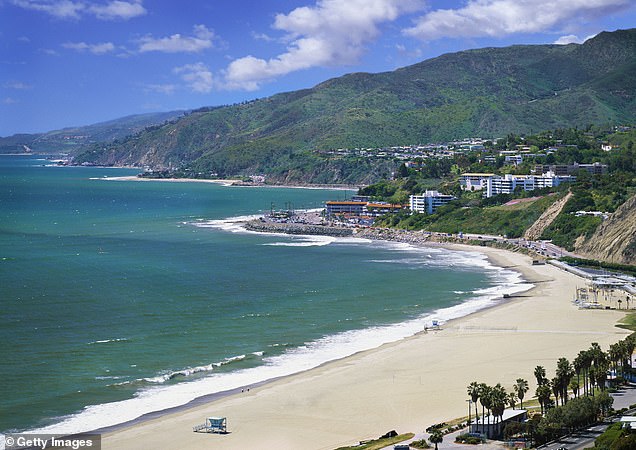 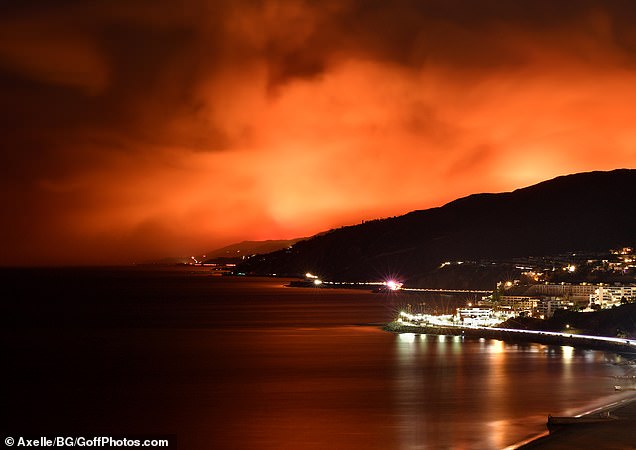 Meanwhile, authorities have more than doubled their estimates of buildings destroyed in huge wildfires.

Firefighters put out a red weather alert late in Southern California on Sunday, fearing high Santa Ana winds could reach up to 50 mph and keep fanning the flames into Tuesday, making things worse before they get better.

Huge plumes of smoke rose in the fire area, which stretches miles from the northwest corner of Los Angeles’ San Fernando Valley to the Malibu coast.

A one-day lull did allow firefighters to gain 20 percent control of the Woolsey fire, which has burned more than 91,572 acres since Thursday.

Officials said Monday that an estimated 370 structures burned in the Woolsey fire and that only 15 per cent of their damage estimate has been completed.

They said over the weekend that 177 buildings had burned amid predictions that the number would grow higher with new damage assessments. 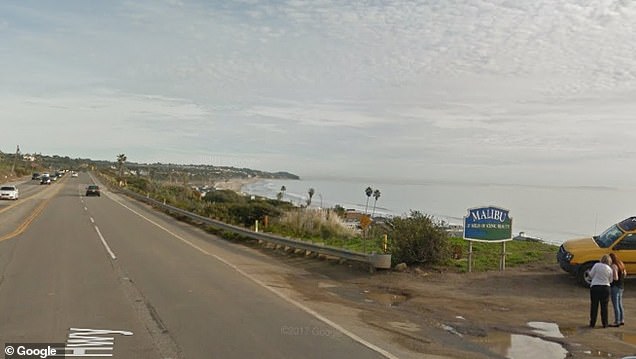 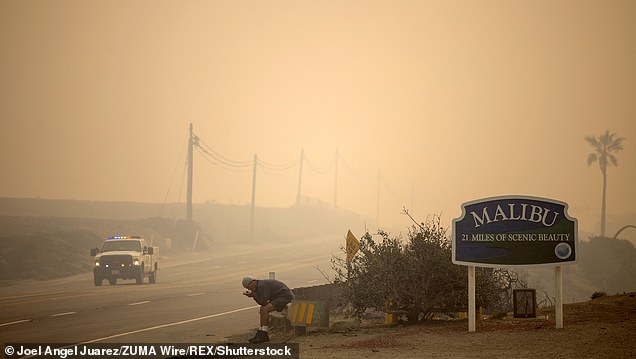 A sign reading ‘Malibu. 21 miles of scenic beauty’ can be seen before and after the fires 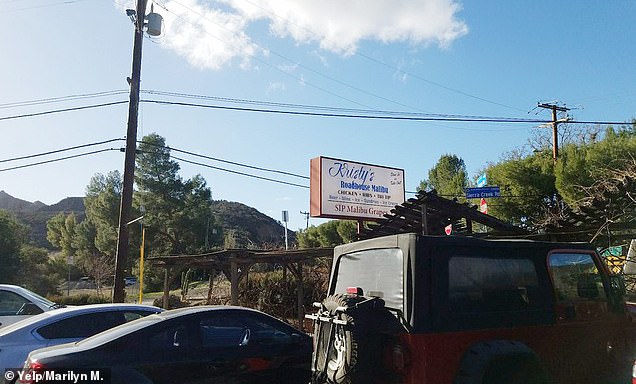 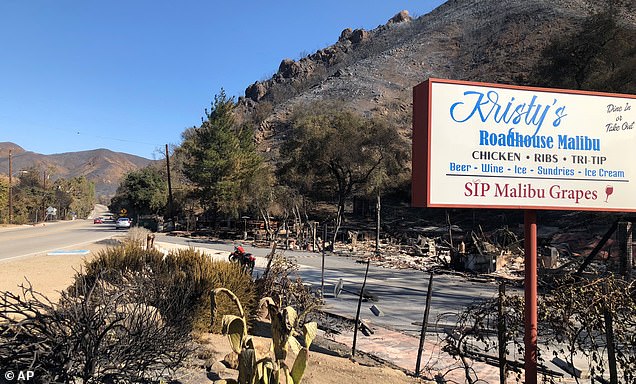 In Northern California, the Camp fire blaze almost completely wiped out the town of Paradise and killed at least 29 people.

Rescue teams are now on the ground in what remains of the town and have been identifying more victims each day.

Authorities said 228 people are still unaccounted, meaning that death toll could rise considerably in the town, which is a popular retirement community. A quarter of Paradise’s population was over the age of 65.

Butte County Sheriff Kory Honea said the devastation is so complete in some neighborhoods that ‘it’s very difficult to determine whether or not there may be human remains there’.

‘In some cases, the only remains we are able to recover are bones or bone fragments,’ Honea said.

Ten search and recovery teams are working in Paradise and authorities called in a mobile DNA lab and anthropologists to help identify victims.