Before and after photos reveal California wildfire devastation in small towns

Grim images show once-thriving California towns devoured by wildfires and reduced to rubble and ruin as residents return to survey what’s left of their homes and their communities.

Thousands of buildings have been destroyed and 51 confirmed dead across the state ravaged by three wildfires over the last week, despite the tireless efforts of some 8,000 of firefighters battling the blazes.

In Northern California, the Camp Fire became the deadliest and most destructive in state history as it tore through Butte County north of San Francisco, razing the town of Paradise and neighboring areas.

Forty-eight have been confirmed dead in that blaze and dozens are still missing in the wake of the Camp Fire. Coroner and rescue teams are sifting through its ashen trail, searching for additional victims.

In Southern California the Woolsey Fire claimed the lives of three people as it torched more than 97,620 acres extending from the north of Los Angeles to the Pacific Ocean.

Grim images show once-thriving California towns devoured by wildfires and reduced to rubble and ruin. Paradise resident Jarrett Barnett shared photos of his home before (left) and after (right) the Camp Fire tore through Northern California 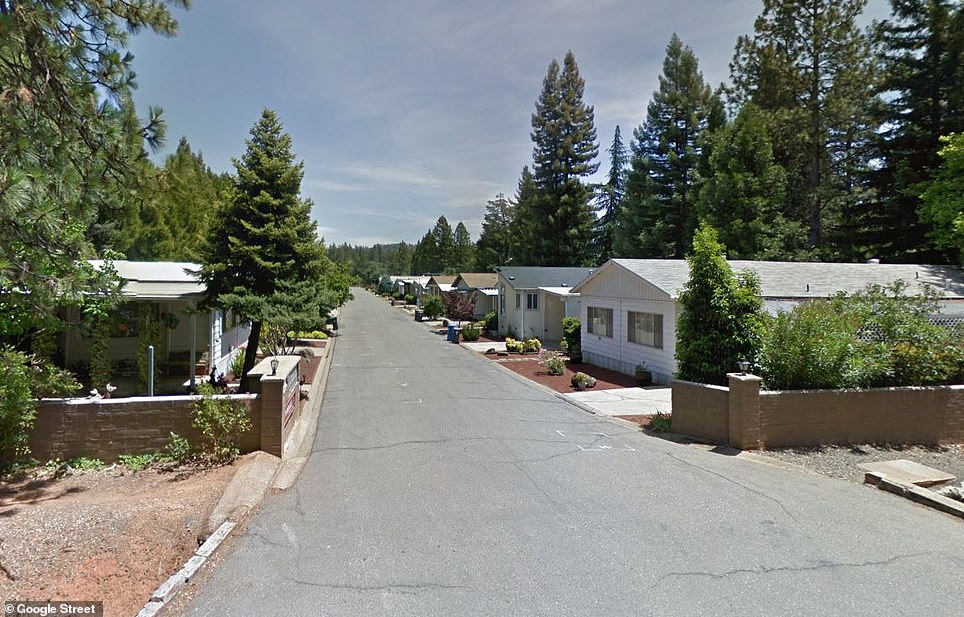 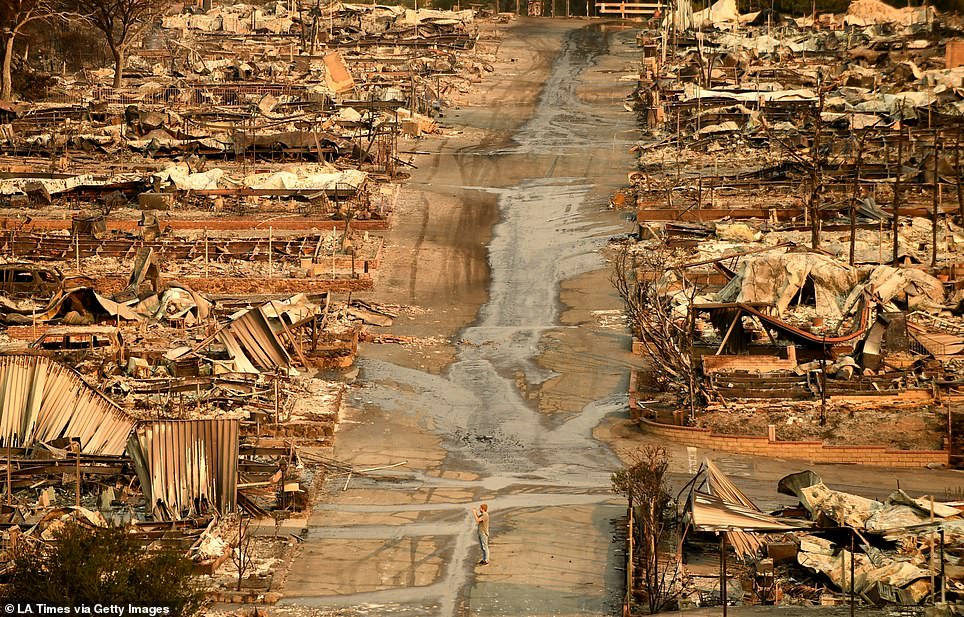 A row of houses stand along a street in Paradise’s Ridgewood Mobile Home Park before the Camp Fire (left). Last week’s inferno flattened the entire neighborhood where one person was found dead in their home 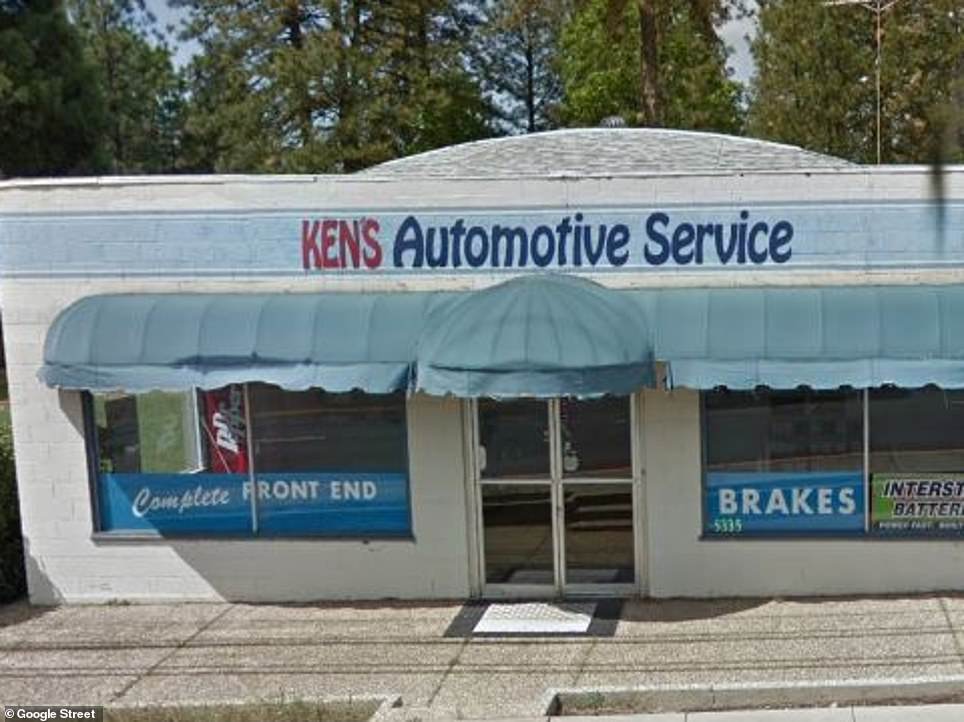 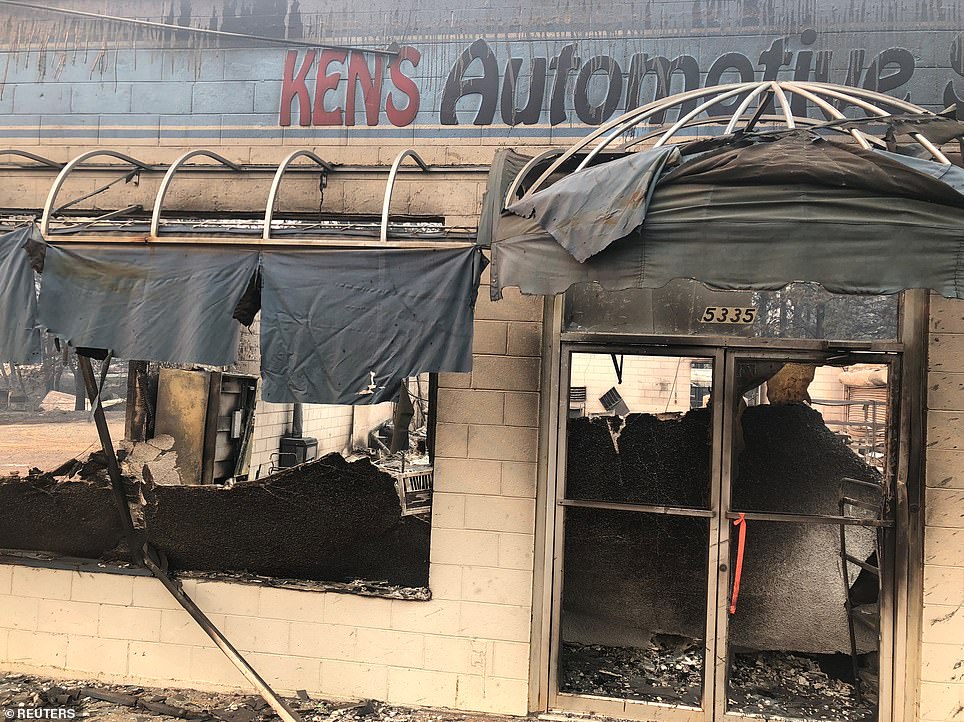 Ken’s Automotive Service store in Paradise is pictured before the fire (left) and after the flames melted the awning and shattered the windows and doors, covering the entire structure in dark ash (right) 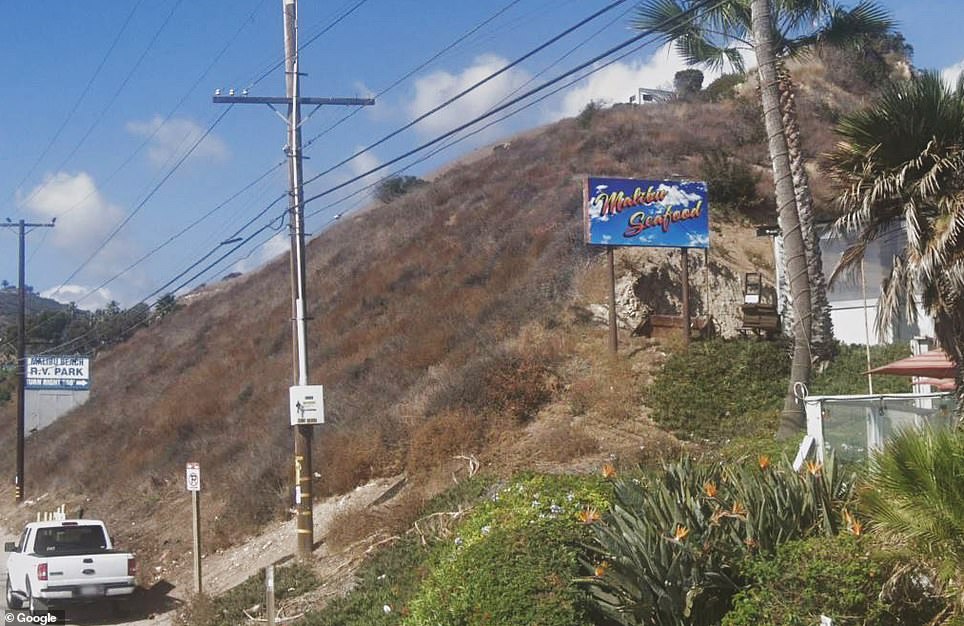 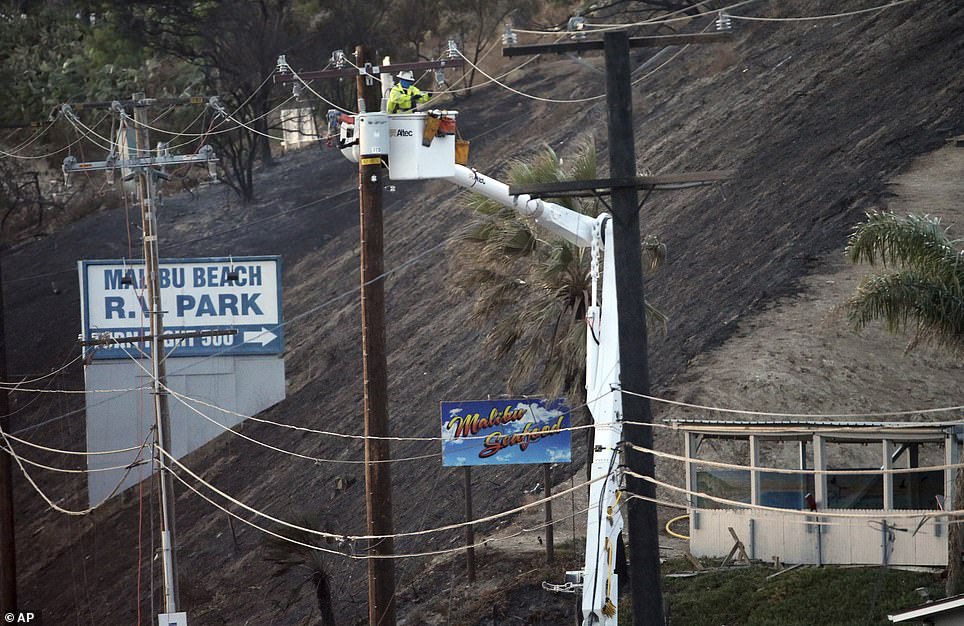 Dry grass on a hillside in Malibu (left) served as tinder for the Woolsey Fire as it spread across nearly 100,000 acres in Southern California. The slope is seen flattened and black after the fire passed over (right) 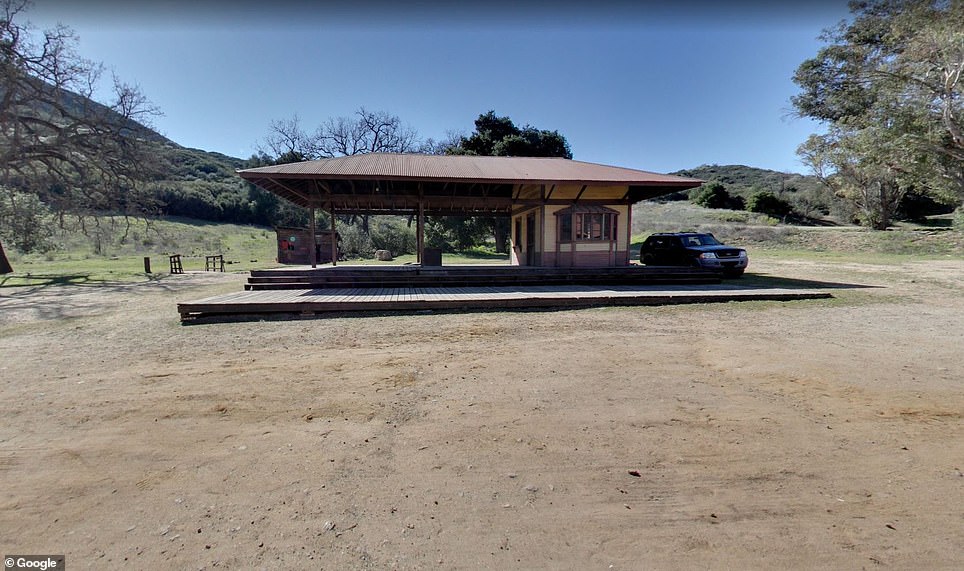 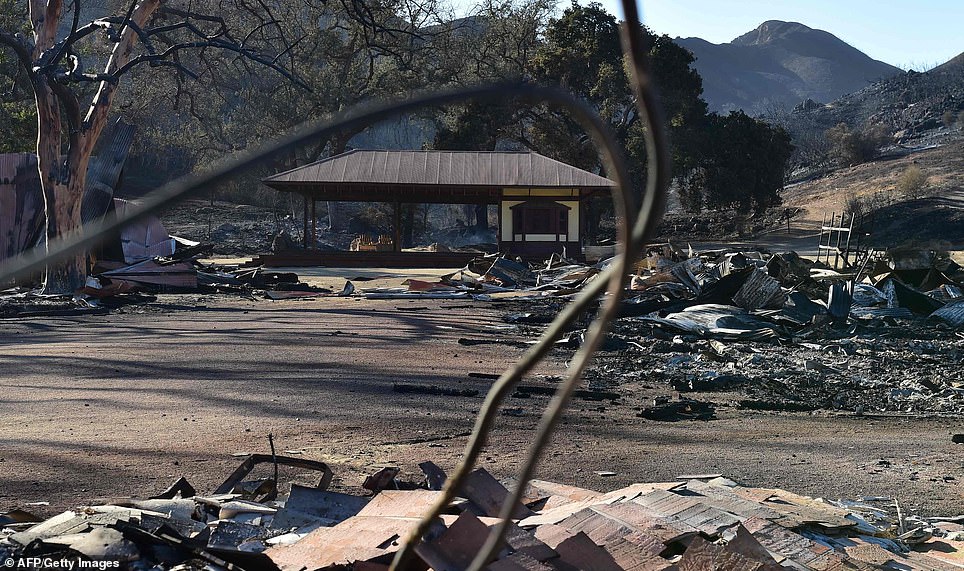 A structure on Paramount Ranch in Agoura Hills, where Westworld and other TV shows were filmed, is pictured before (left) and after the Woolsey Fire tore across the property, scorching a number of structures 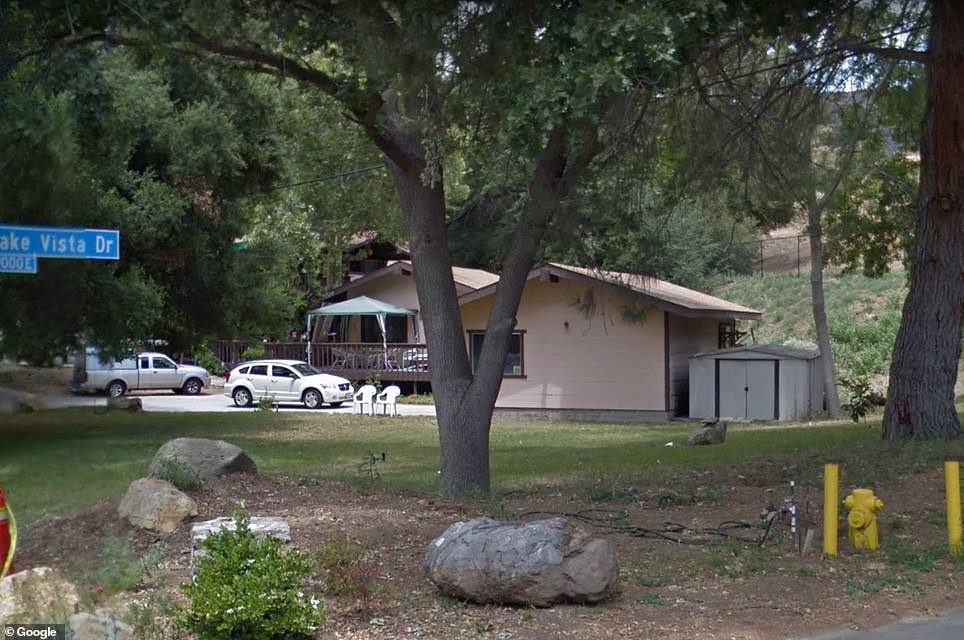 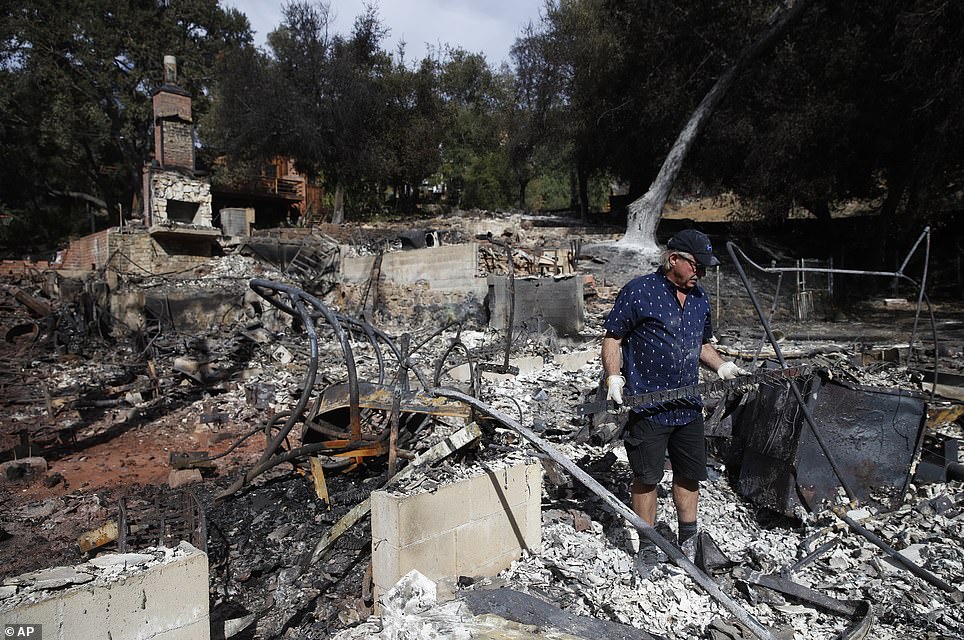 The home of Roger Kelton’s mother-in-law was one of many caught in the Woolsey Fire’s path over the weekend. It is seen before the fire (left) and after (right) as Kelton sifts through the wreckage

In Paradise, authorities are currently working hard to identify more victims of the horrific blaze.

Butte County Sheriff Kory Honea said the devastation is so complete in some neighborhoods that ‘it’s very difficult to determine whether or not there may be human remains there’.

‘In some cases, the only remains we are able to recover are bones or bone fragments,’ Honea said, adding that these were so small that coroner’s investigators were using a wire basket to sift and sort them.

Honea said his office had received more than 1,500 requests for ‘welfare checks’ from people concerned about the fate of their loved ones.

Authorities have set up a rapid DNA analysis system and brought in cadaver dogs and mobile morgue units from the military in an intensified effort to find and identify victims. They have also requested 150 additional search-and-rescue personnel. 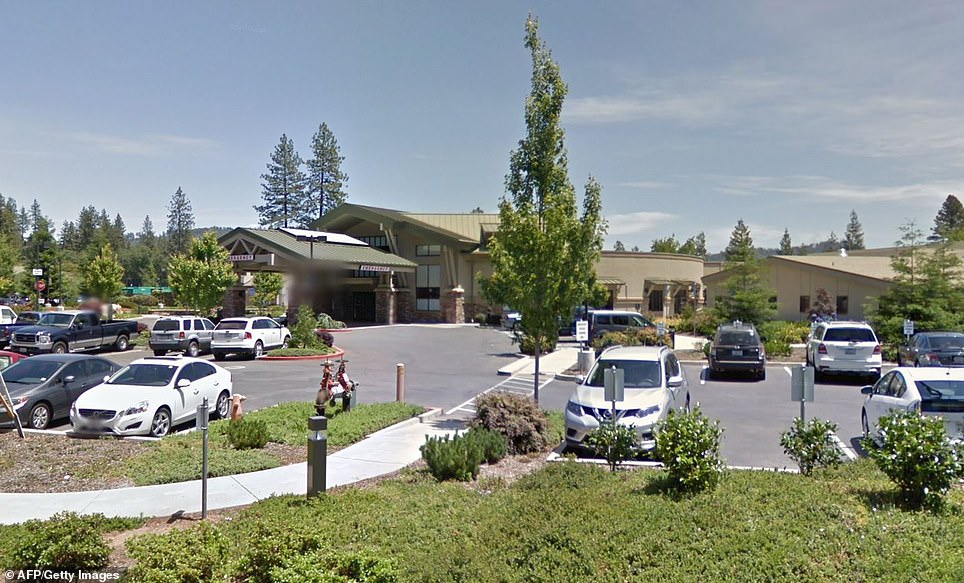 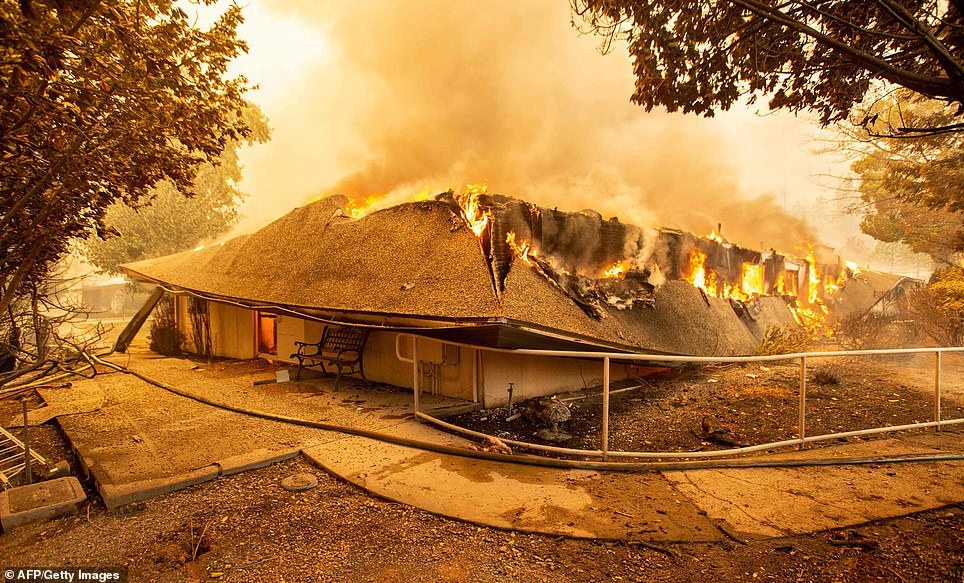 The Feather River Hospital is pictured as it went up in flames on Thursday (right) after all its patients were evacuated. It is pictured left before the devastating fire 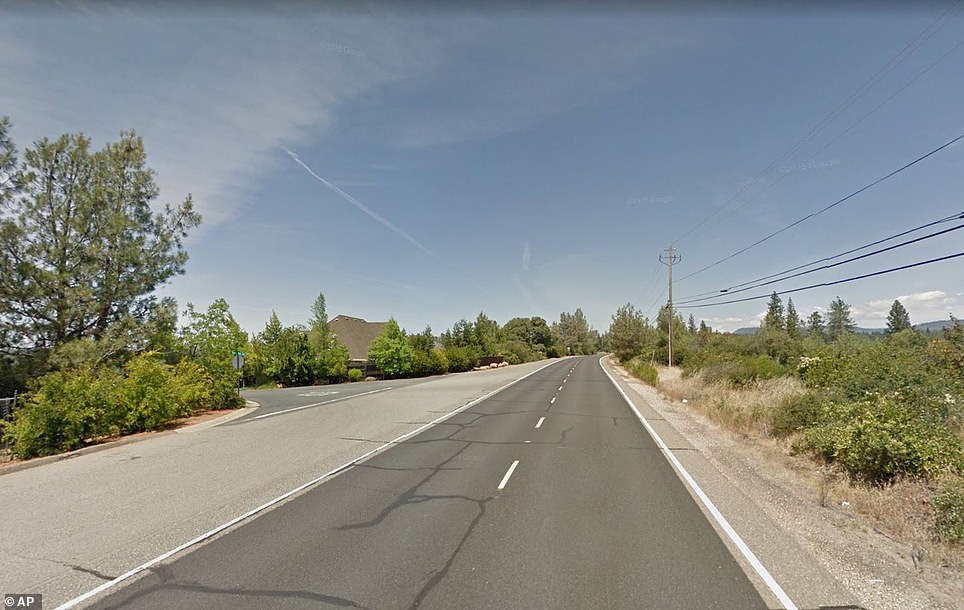 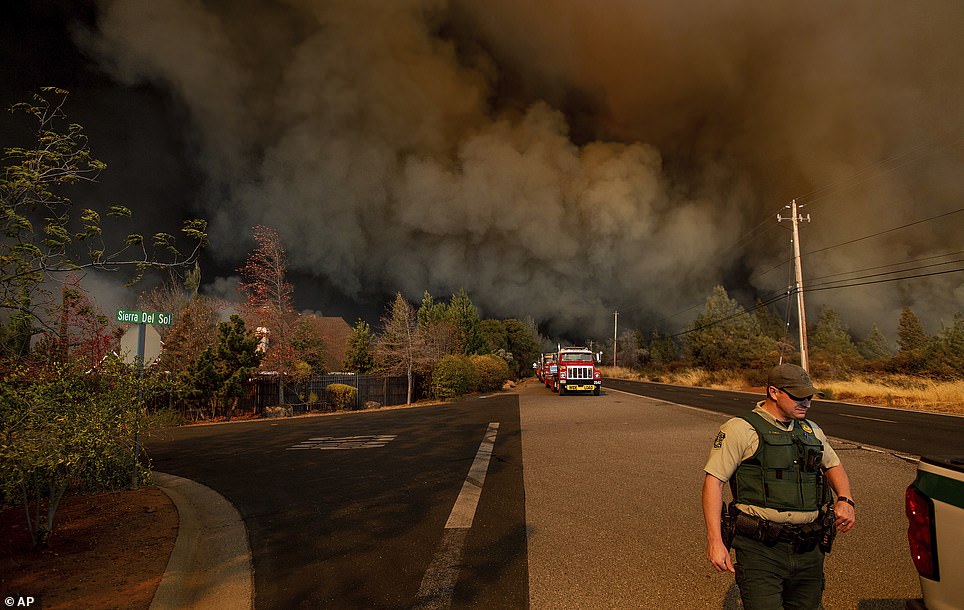 Fire crews are seen policing a street in Paradise after the worst of the fires passed (right). The road is seen beforehand at left 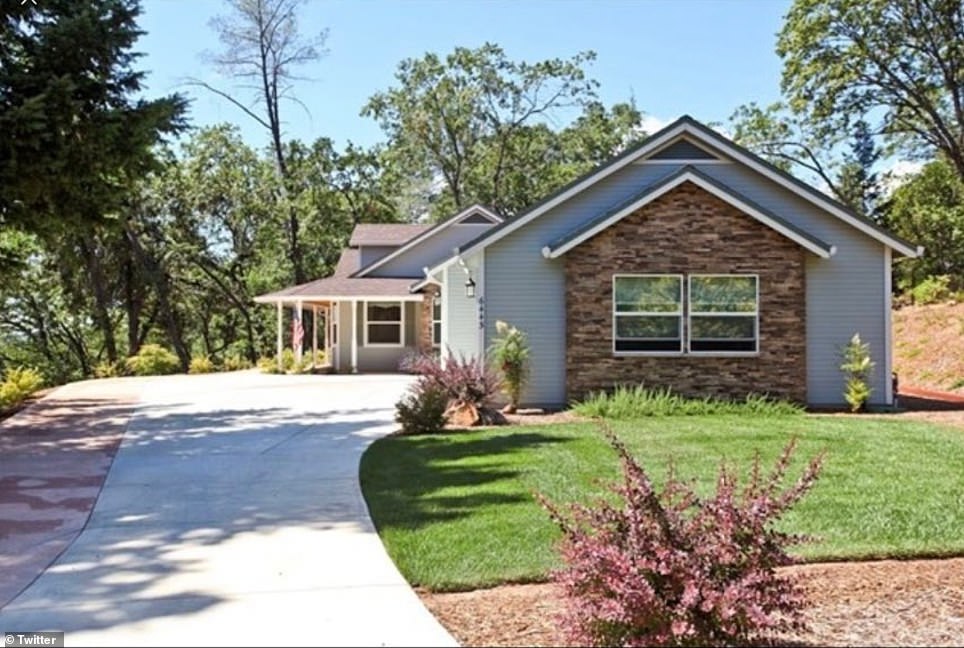 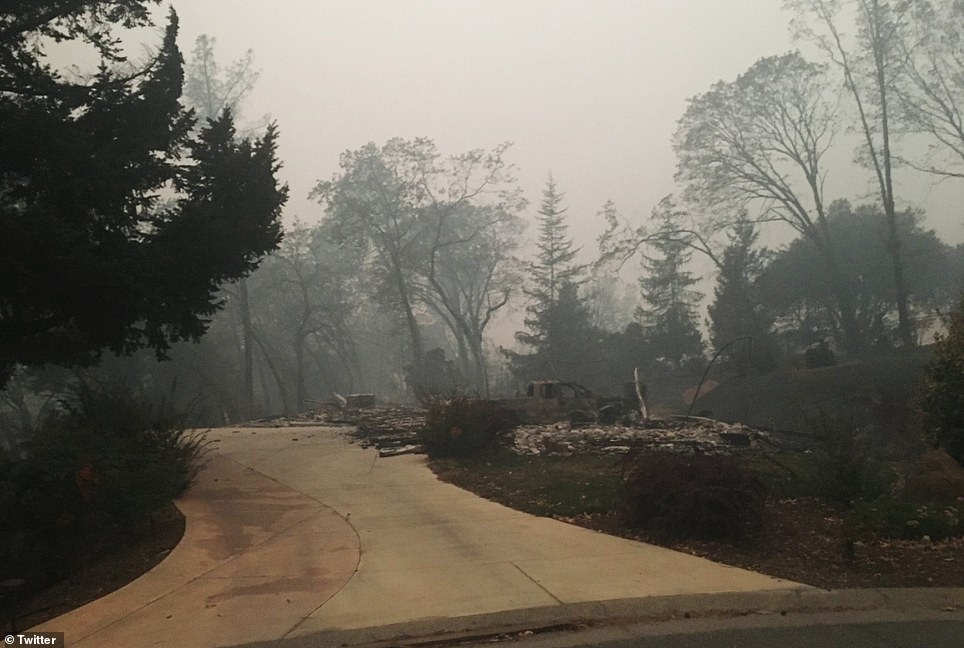 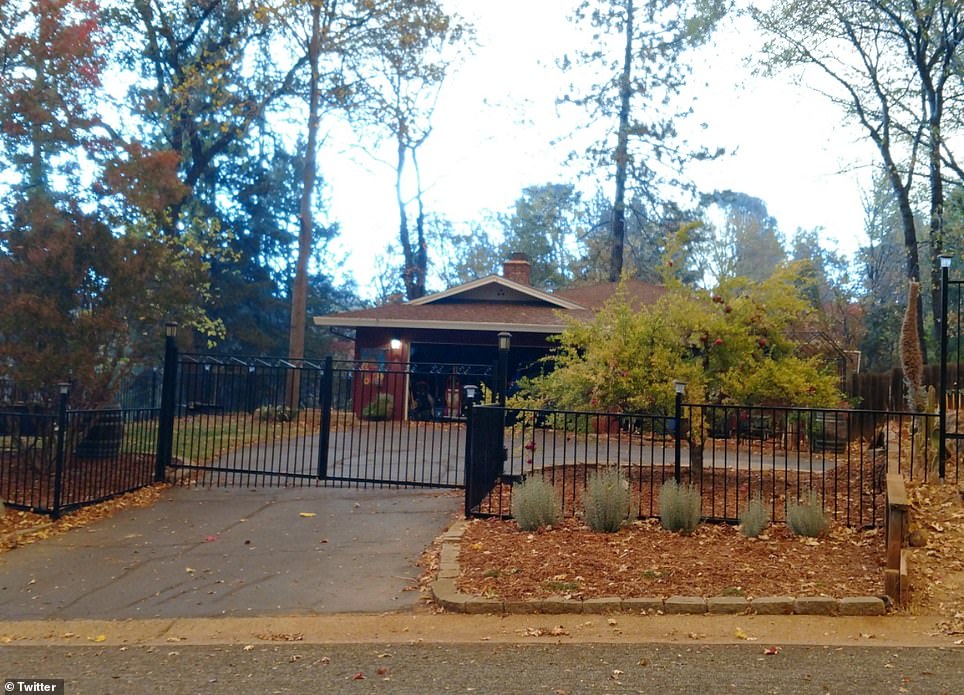 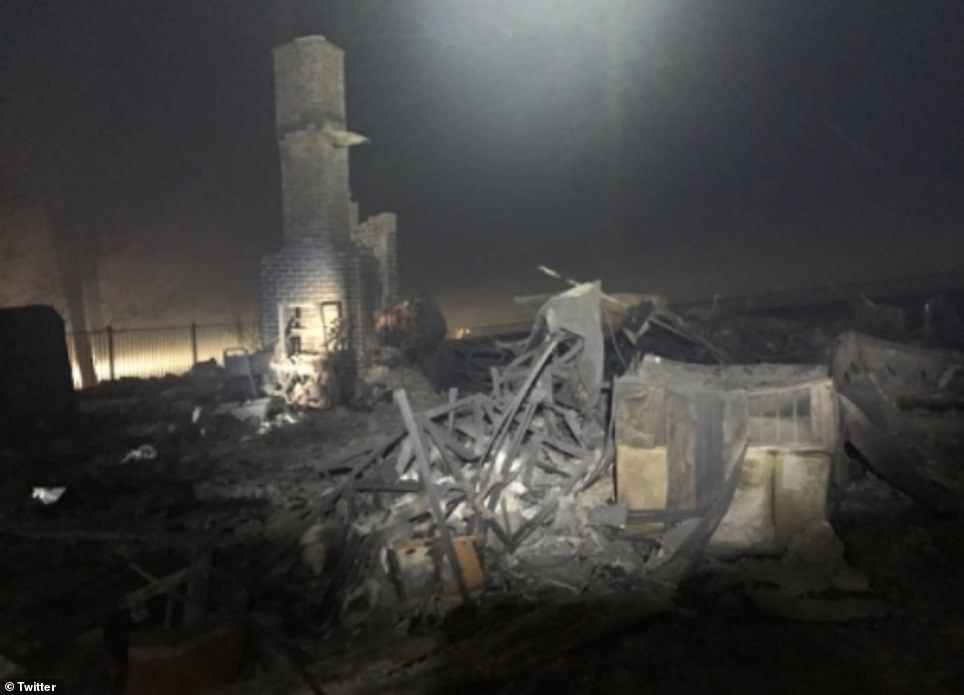 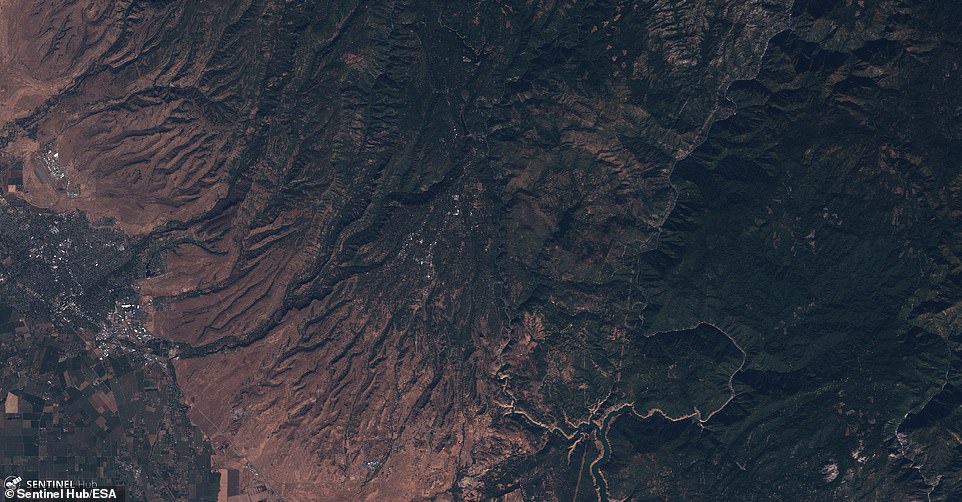 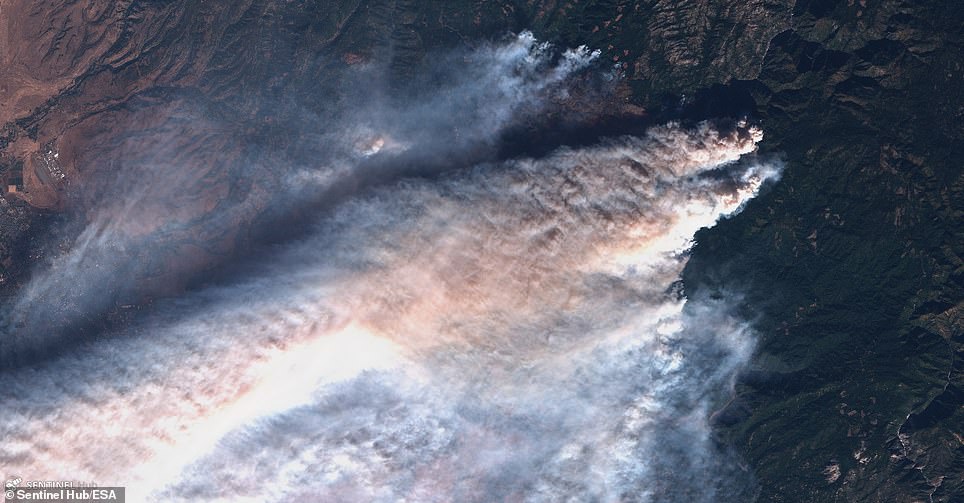 Authorities revealed on Wednesday that human remains were found in a burned home in Agoura Hills in Los Angeles County. Two other bodies were found last week in a car that had been overtaken by flames. They have not yet been identified.

CA WILDFIRES BY THE NUMBERS

The Woolsey Fire has burned an area the size of Denver and destroying more than 400 structures and 80 percent of National Parks Service land in the Santa Monica Mountains.

On Tuesday morning it ripped through 50 acres in 30 minutes as hurricane-force winds of 85mph sparked a new flare-up. It burned a total of 1,000 acres in the Lake Sherwood area.

Authorities believe the flare-up was caused by what are known as ‘red flag conditions’, in which low humidity and high winds combine to make the perfect conditions for a wildland fire combustion.

‘It’s critically dry with incredibly strong winds, so that really puts us back into a day where we could see rapid fire spread as a result of any new fires or flare-ups,’ Cal Fire Division Chief Chris Anthony told the Los Angeles Times.

Rains aren’t expected to hit the parched area until Thanksgiving next week, according to the National Weather Service.

‘We are not out of the woods yet,’ added Ventura County Fire Chief Mark Lorenzen. ‘We still have incredibly tough conditions ahead of us.’

As of Wednesday morning the Woolsey Fire was 47 percent contained and 57,000 structures still remain under threat. 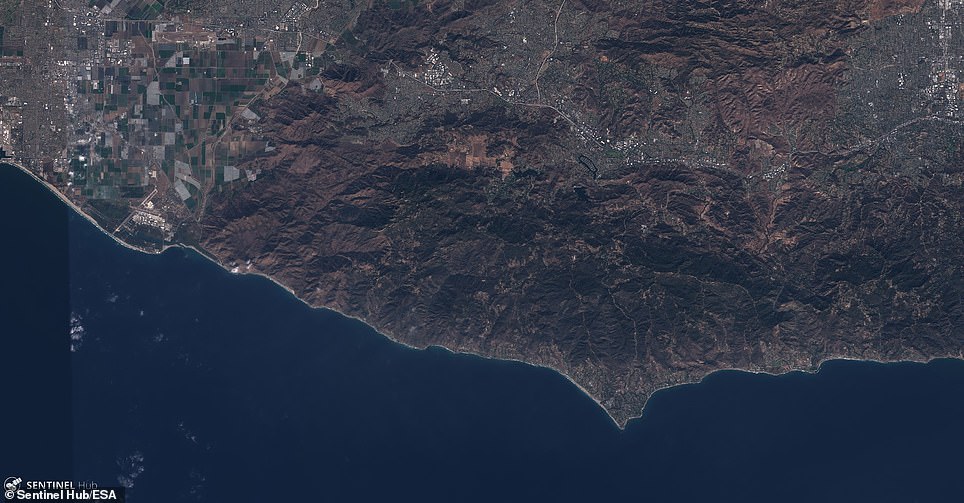 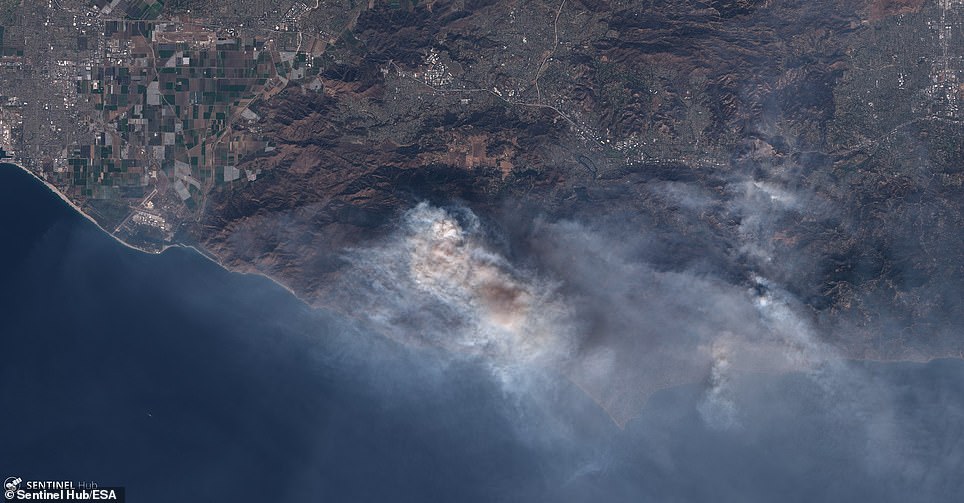 Two other infernos were ignited in Southern California on Thursday, quickly taking over nearly 150 square miles. The affected area north of Los Angeles is pictured left last Tuesday before the wildfires and right today cloaked in smoke 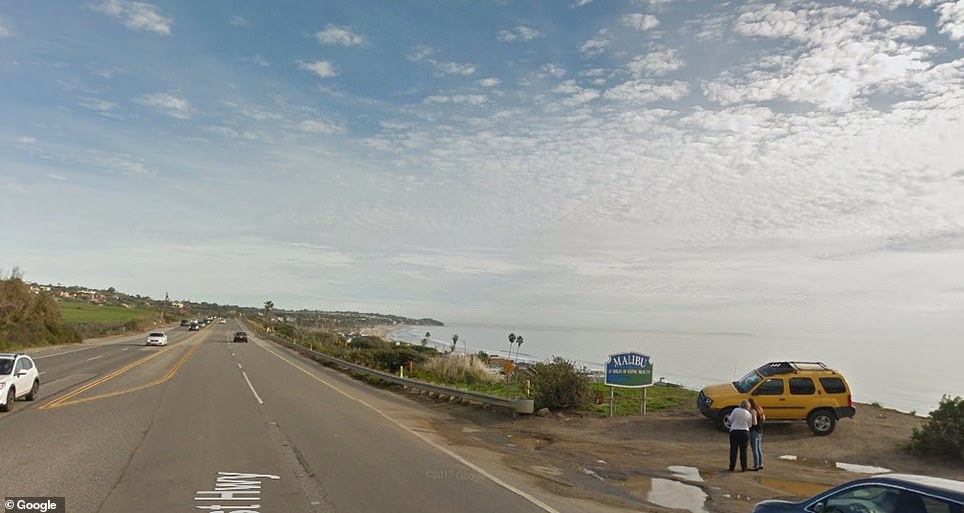 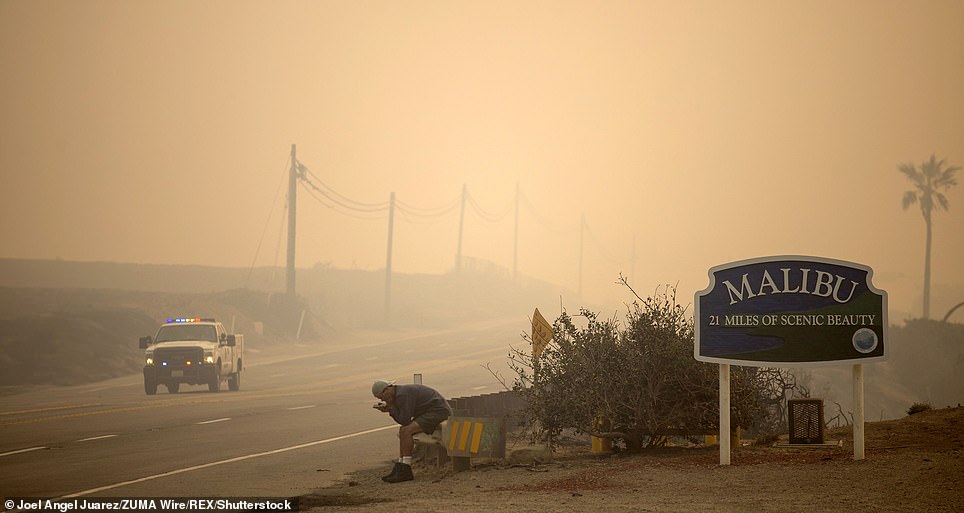 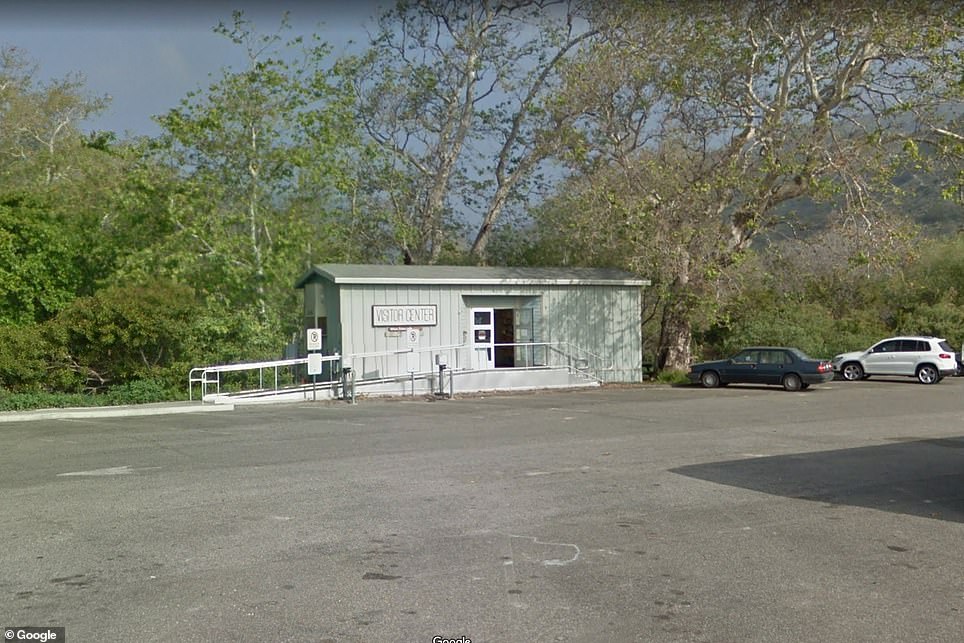 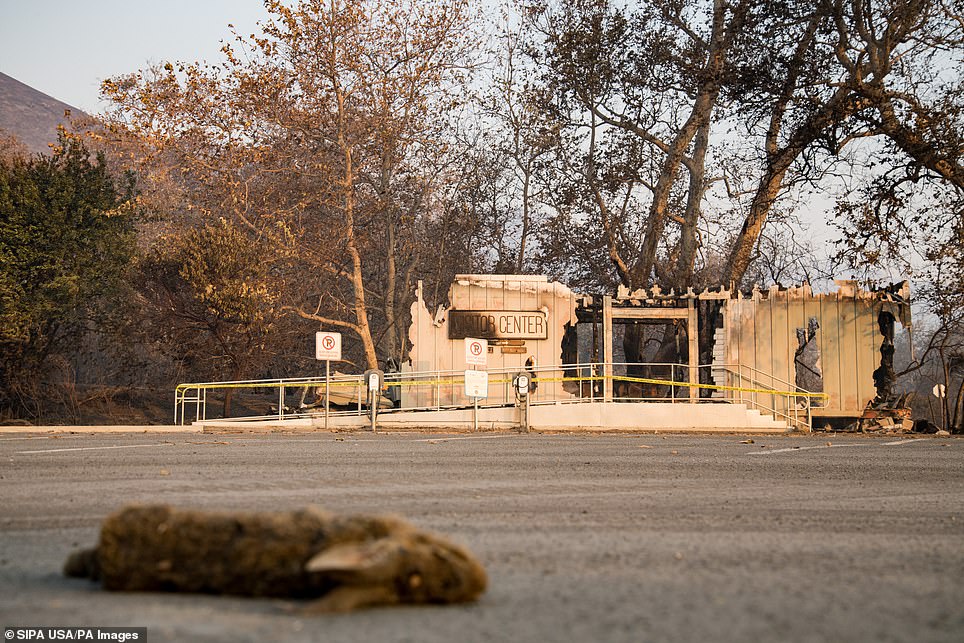