The Battle of Budapest at the end of the Second World War lasted 50 days.

Soviet and Romanian troops laid siege to the Hungarian capital and the outnumbered Hungarian and German troops within from December 26, 1944, until it surrendered on February 13, 1945. Around 38,000 civilians lost their lives during the fighting.

These remarkable before-and-after pictures show that the city was left in ruins – and then rebuilt into one of the jewels of Eastern Europe. The locations captured in the black-and-white images – courtesy of the Fortepan archive – have been precisely matched in pictures by photographer Amos Chapple, on assignment for www.rferl.org, to reveal how they’ve been transformed between 1945 and 2020.

Amos, who’s originally from New Zealand but who now lives in Prague, told MailOnline Travel: ‘I love digging through photo archives and Fortepan is one of the best. When I saw the photos of Budapest lying in ruins after the war it just blew my mind — I had no idea. There’s a narrative being sold to young people now that the Western world is broken. I remember shooting these pictures, looking at the grim archive photo on my hand, and up to the glorious modern city of today and just thinking how wrongheaded and – to be blunt – how ungrateful that is. We are incredibly lucky to live on this continent at this time.’

He added: ‘For me, the most moving photograph is the shot from the Fisherman’s Bastion looking out over the city showing the extent of the destruction. Hungarians had fought and murdered alongside the Nazis inside today’s Russia, so The Red Army advance was really a wave of vengeance, backed by Allied air power. This was revenge on a massive scale. I think that picture really captures the viciousness of the war in Central Europe.’

Scroll down to see the fascinating photographs. Warning – the images contain scenes some may find disturbing. 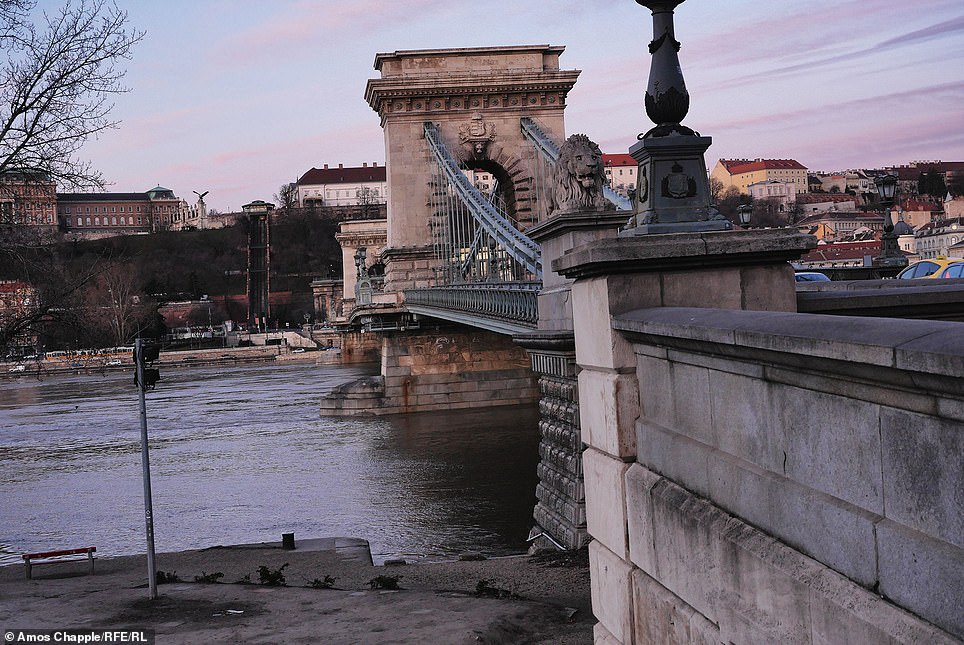 The 19th-century Szechenyi Chain Bridge over the Danube was blown up by retreating Nazis, then rebuilt and reopened again in 1949. It has featured heavily in modern popular culture – it even appears in Katy Perry’s video for hit song Firework 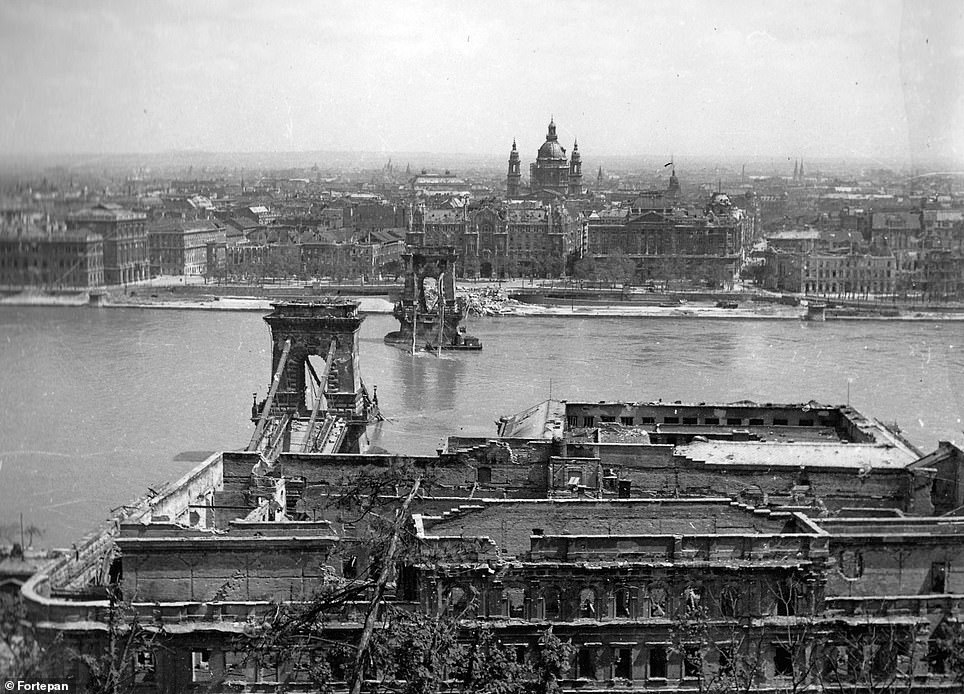 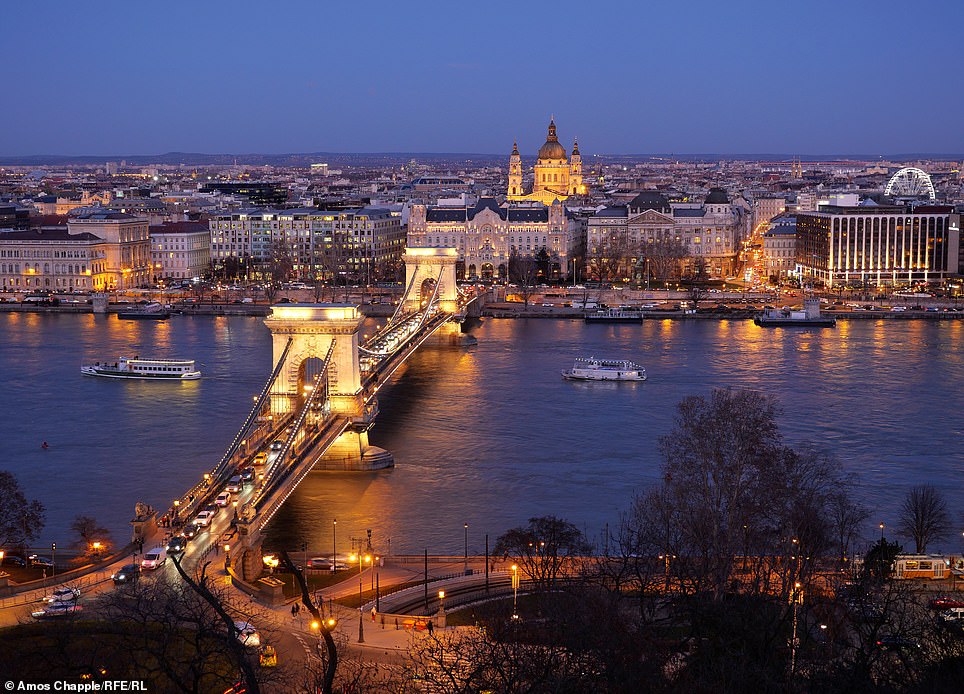 The destroyed Szechenyi Chain Bridge, this time from a broader perspective. The bridge was designed by English engineer William Tierney Clark and today is one of Budapest’s most eye-catching sights 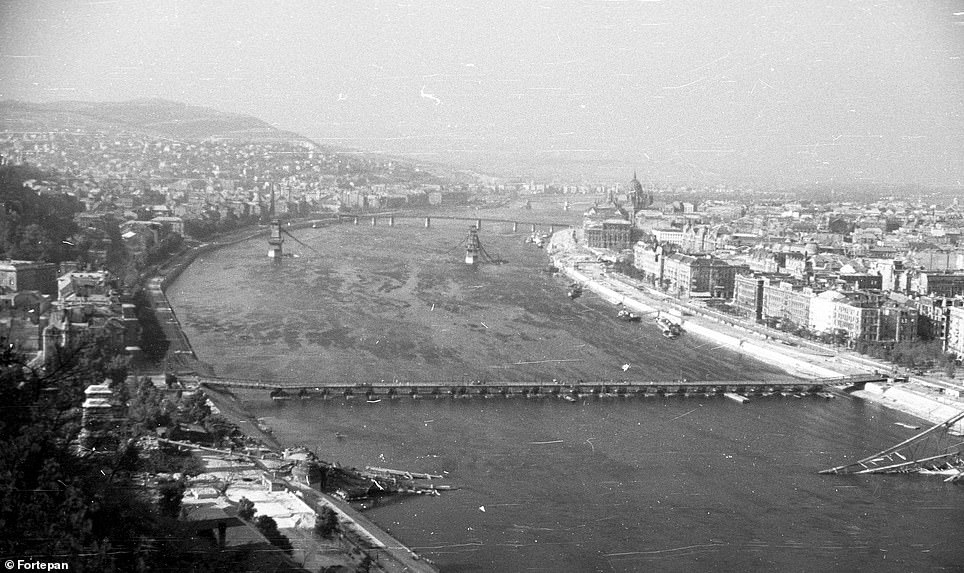 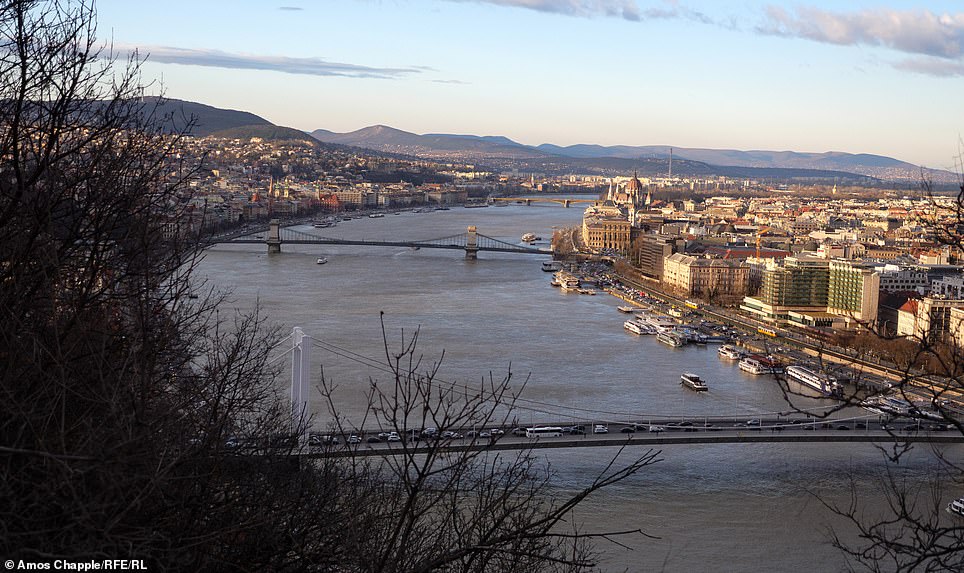 This remarkable archive photograph shows the temporary pontoon bridges that stretched across the Danube after the war following the destruction of the city’s bridges by Nazi-led forces. Today the city has 14 major bridges 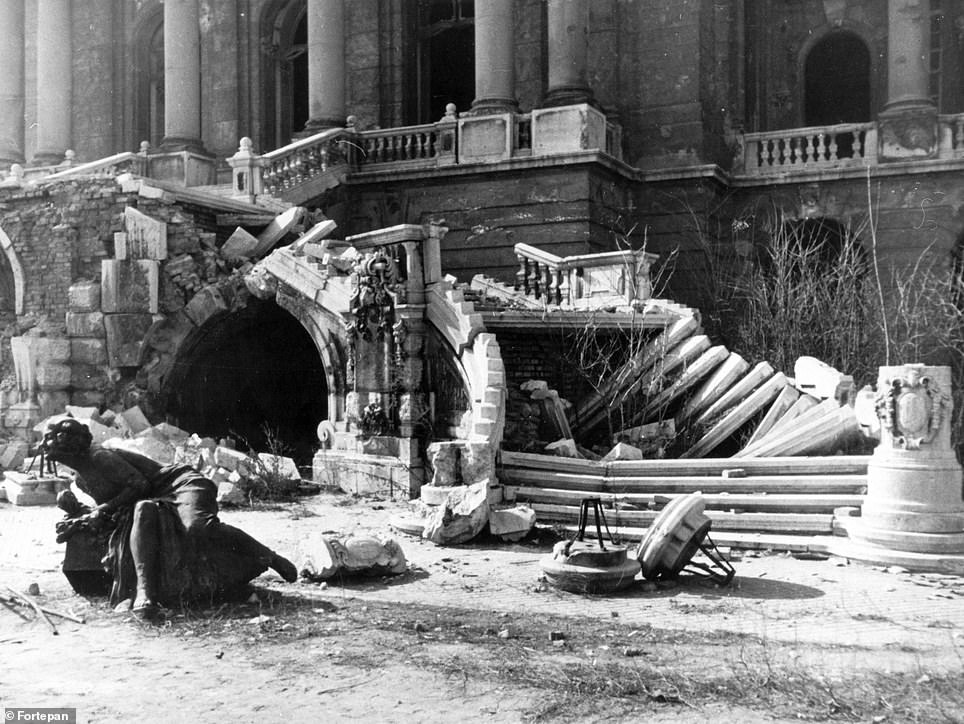 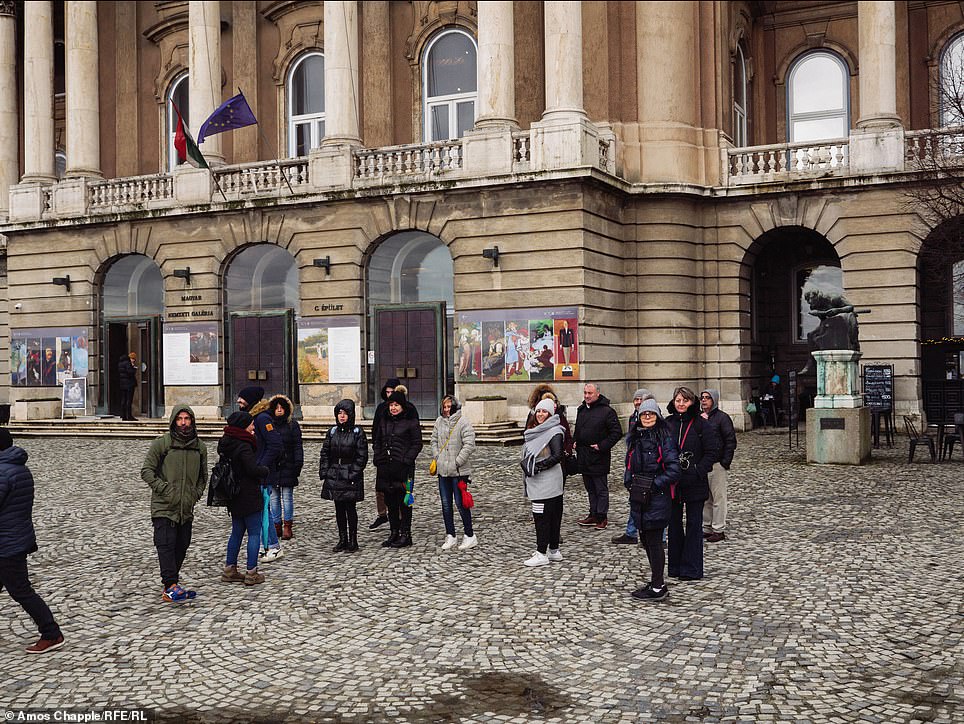 Buda Castle was the last major stronghold of the Nazi and Hungarian troops. Before the Red Army siege, the Nazis landed planes and gliders on nearby roads and in the adjacent park, but this became impossible once the Soviets began hammering the area with artillery fire. The main entrance to the castle was destroyed – and never rebuilt. Today Buda Castle is a Unesco World Heritage Site 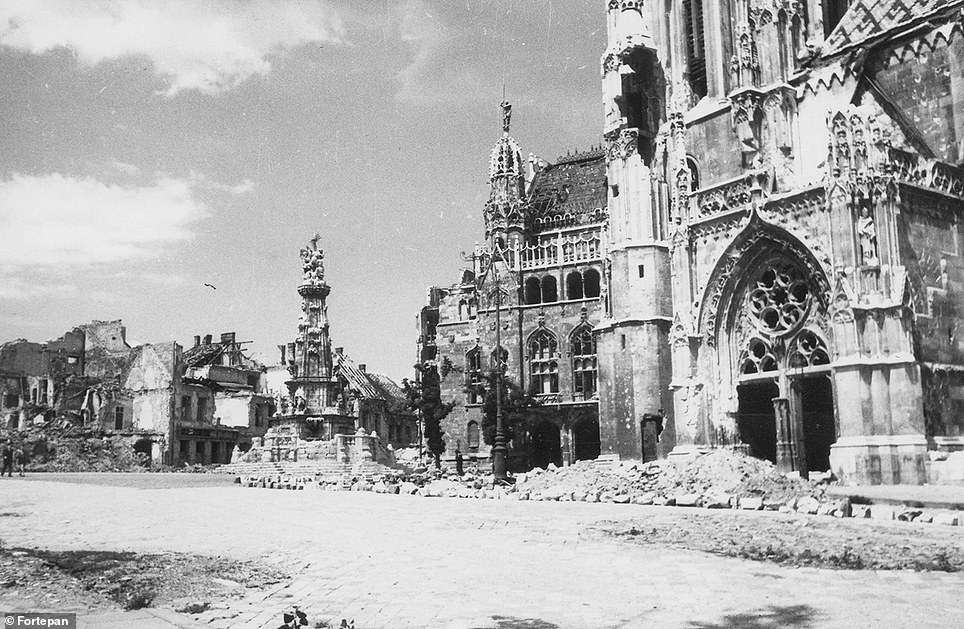 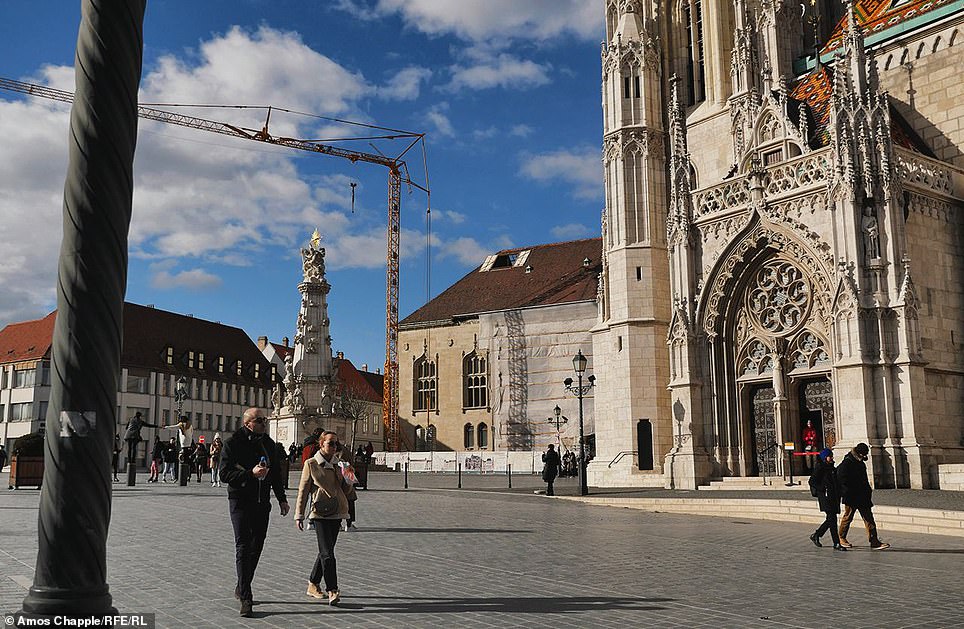 The 11th-century Matthias Church, which was heavily damaged during the fighting. Restoration work was eventually completed in 1984 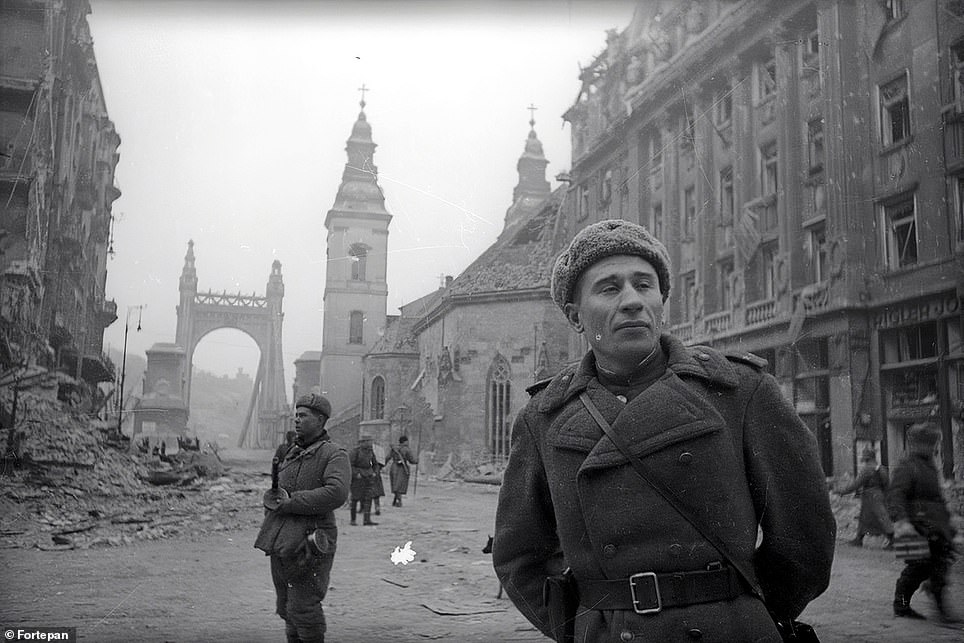 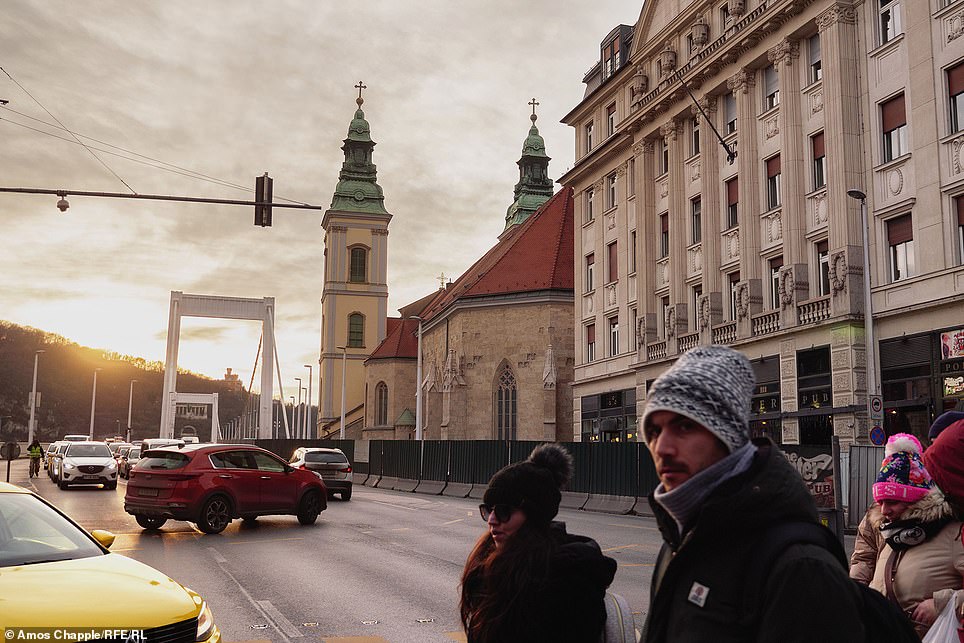 The archive picture shows Red Army soldiers in front of the destroyed Elisabeth Bridge, which spans the narrowest section of the Danube. It was rebuilt, says Amos, by the ruling Communist part between 1961 and 1964 ‘without flourishes’ 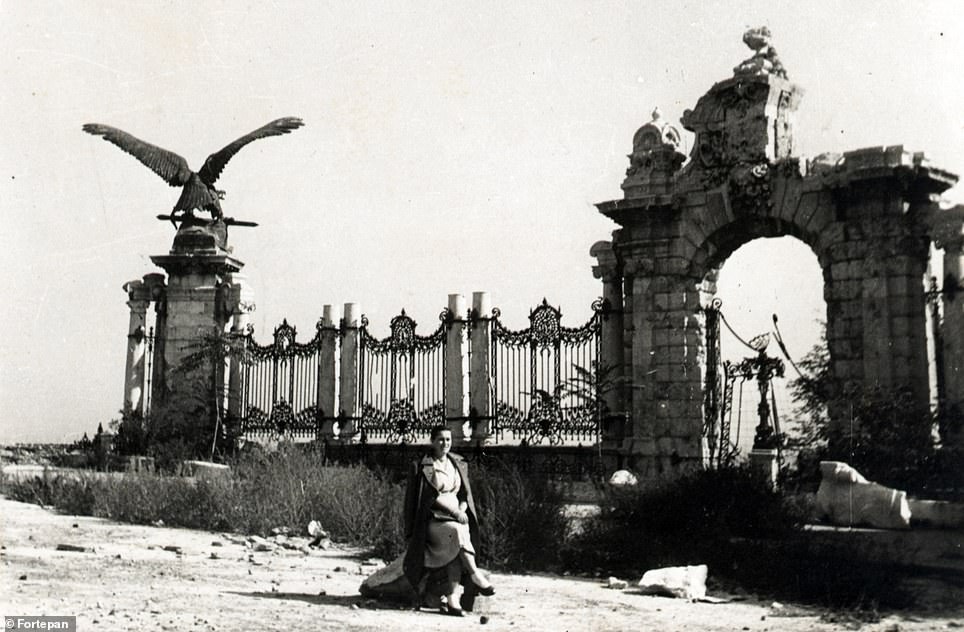 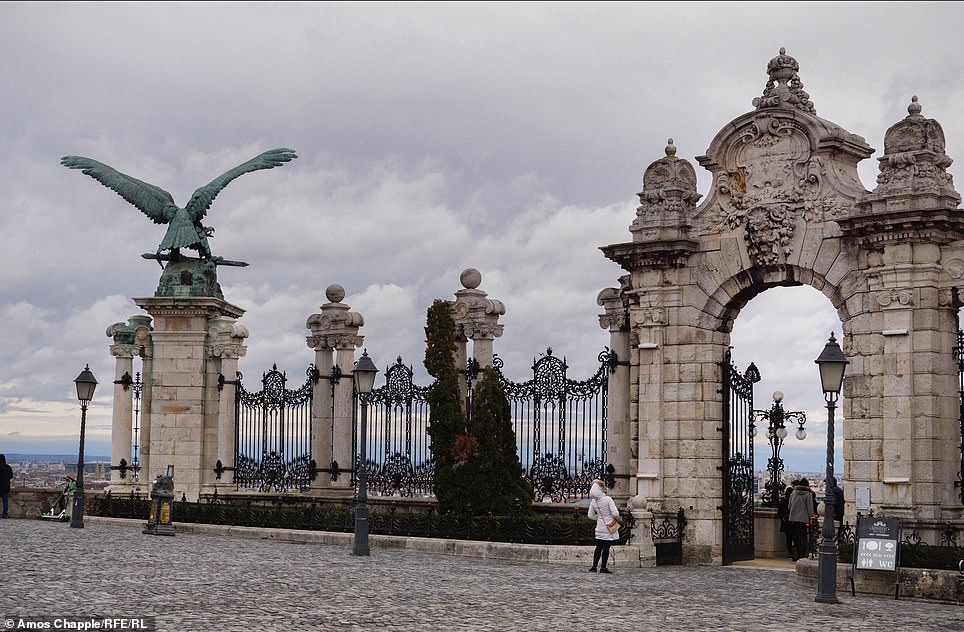 Some of the ornamental flourishes at Buda Castle were left in tatters by the war. As Amos’s 2020 picture shows, stonemasons have restored them to their former glory 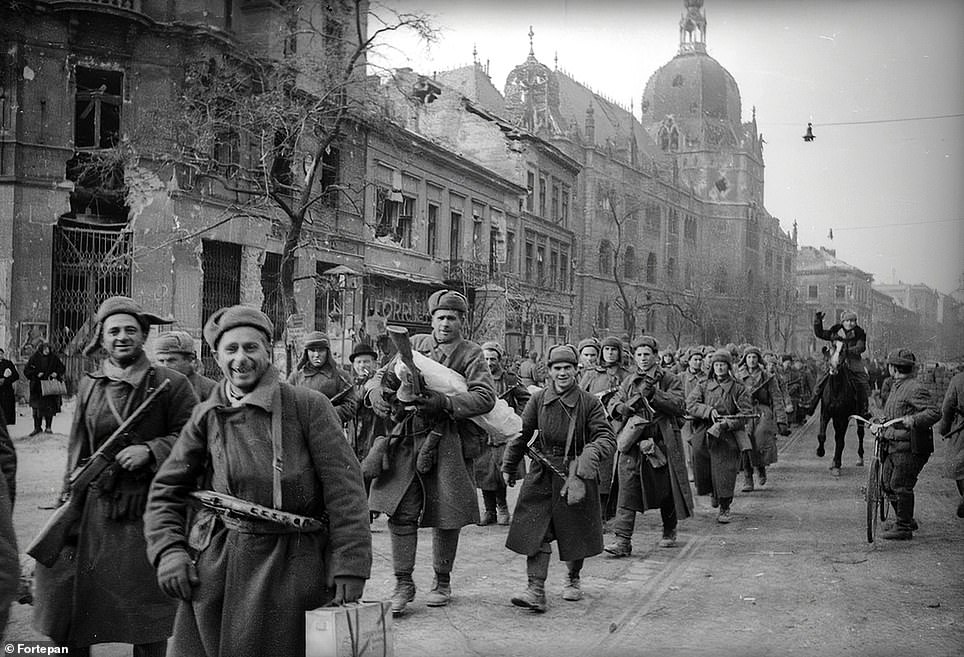 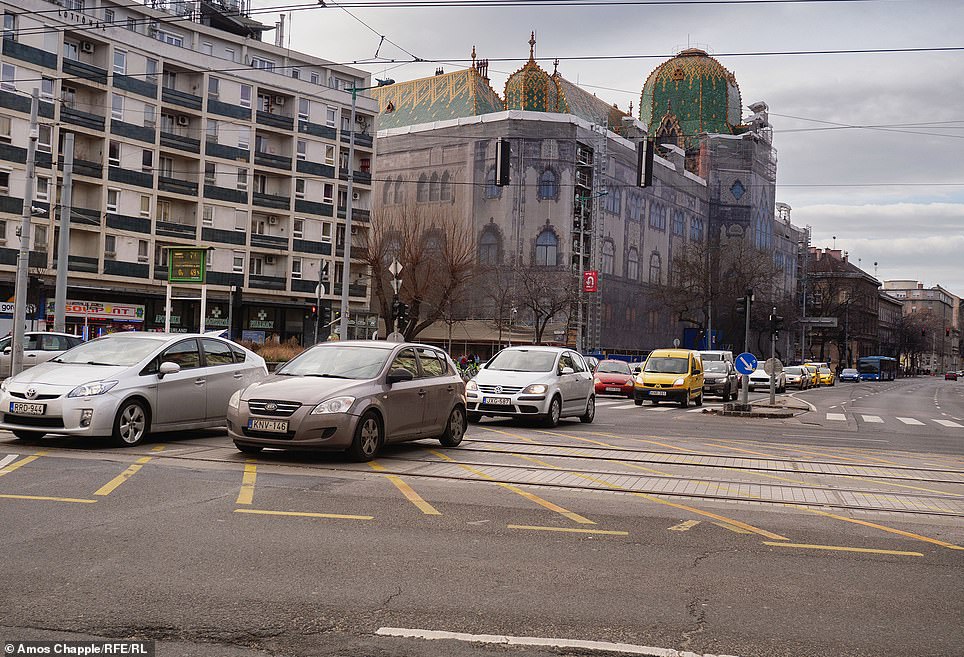 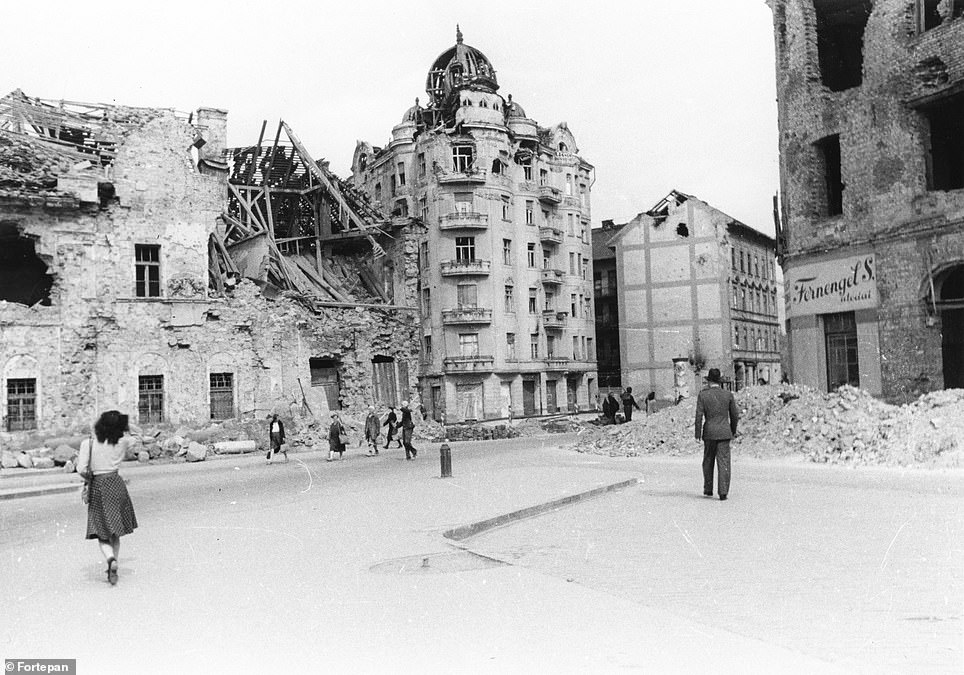 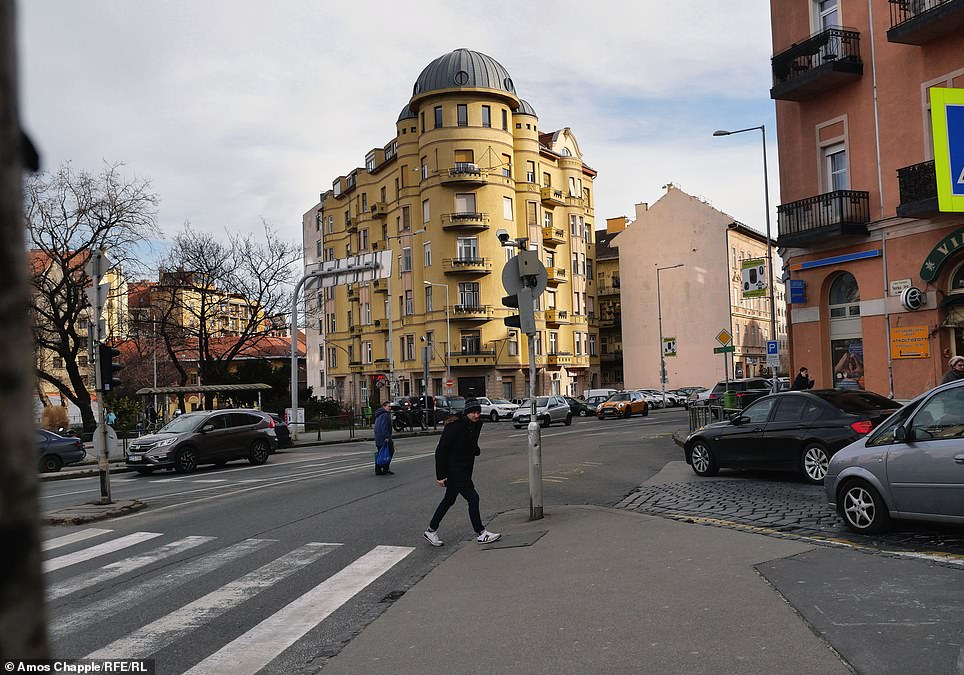 Wrecked residential buildings near Buda Castle. The Battle of Budapest at the end of the Second World War lasted 50 days 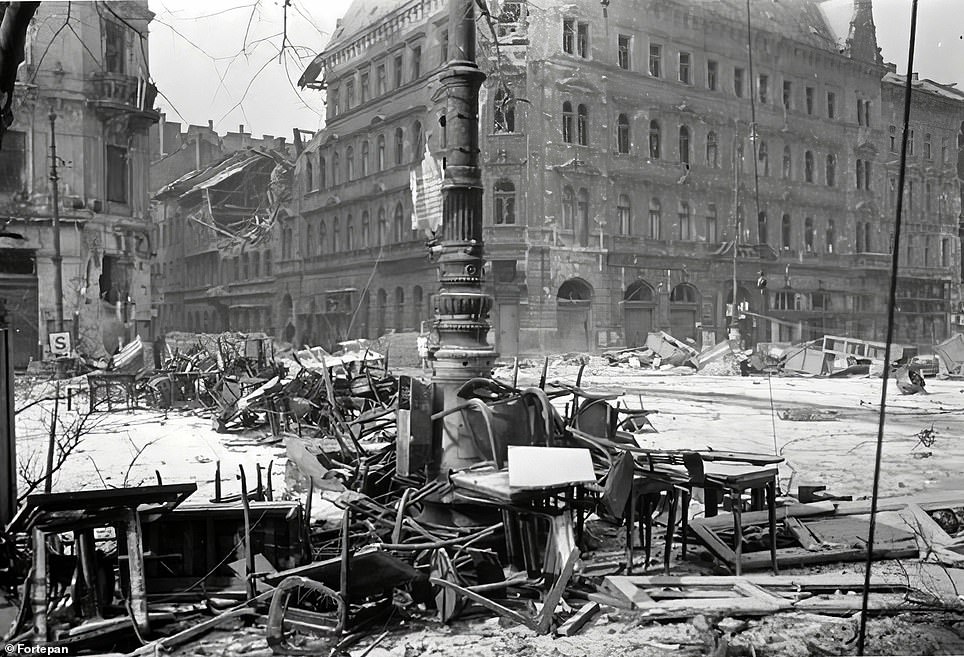 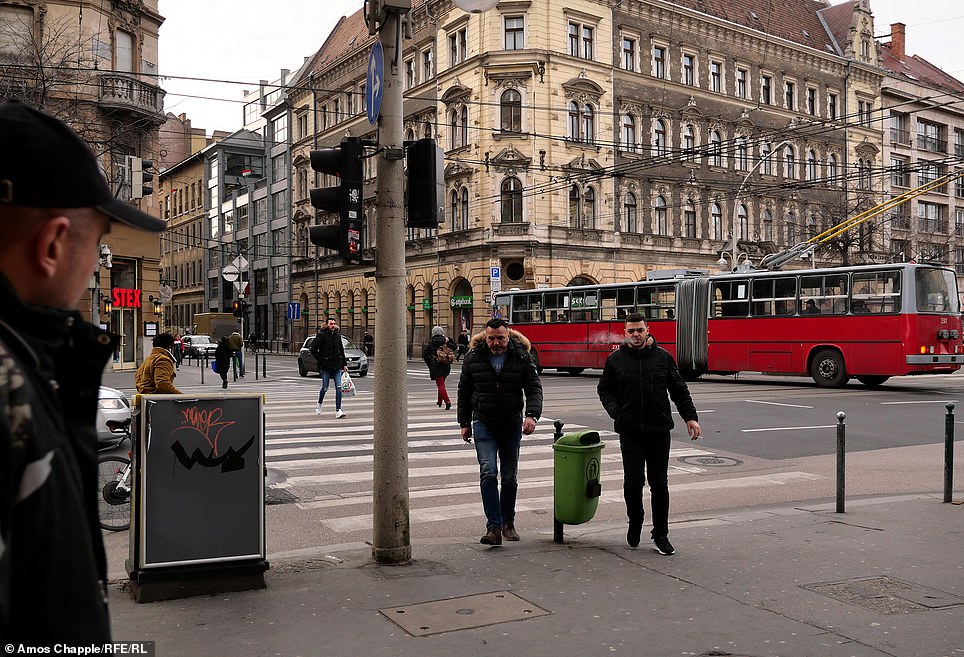 Around 38,000 civilians in Budapest lost their lives during the fighting. Hungary had allied itself to Germany and many of its soldiers committed atrocities. Amos said: ‘The Red Army advance was really a wave of vengeance’ 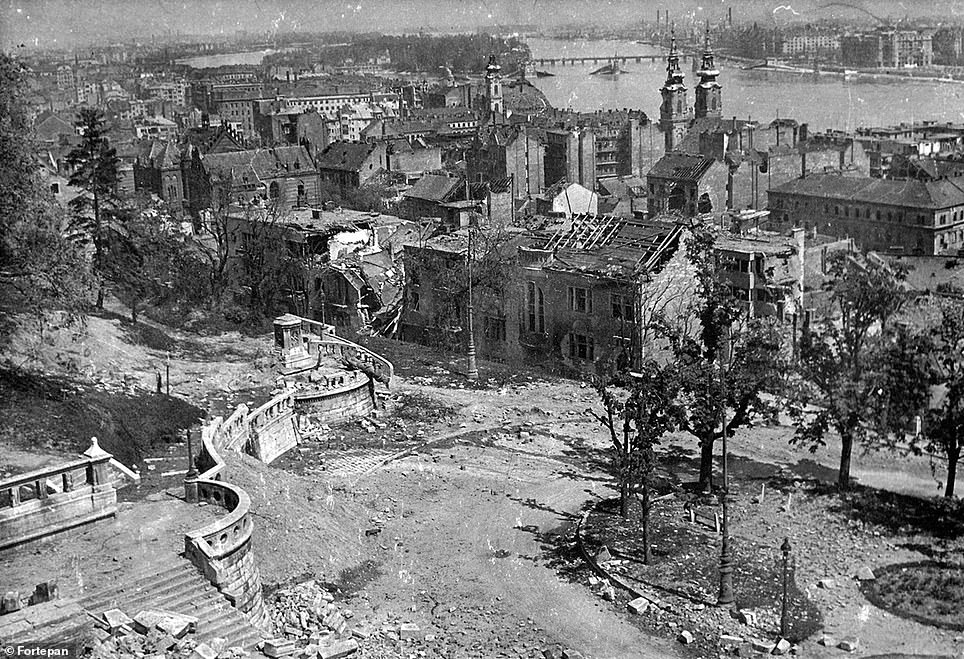 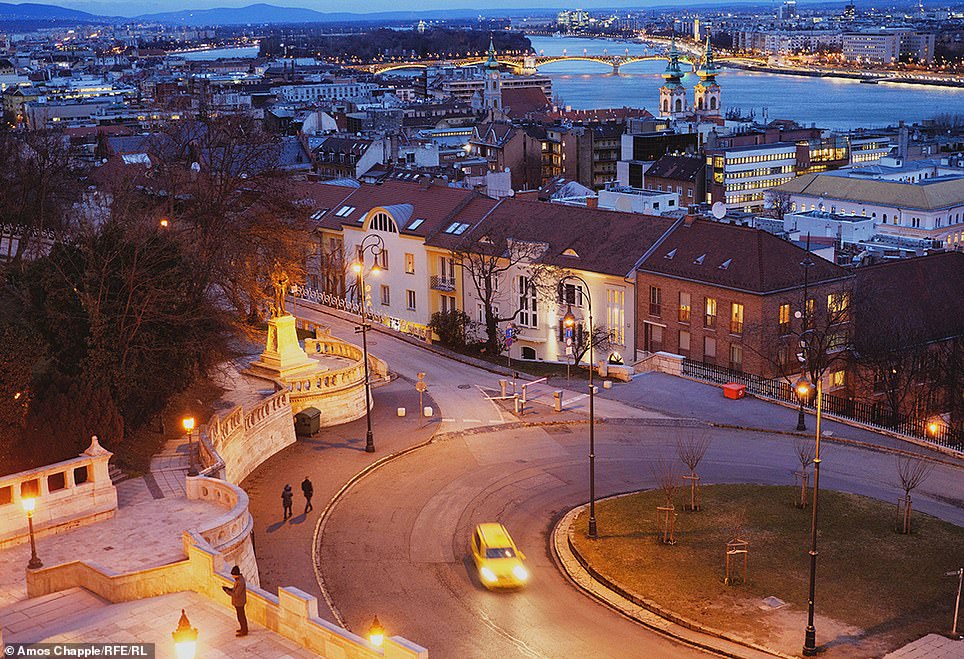 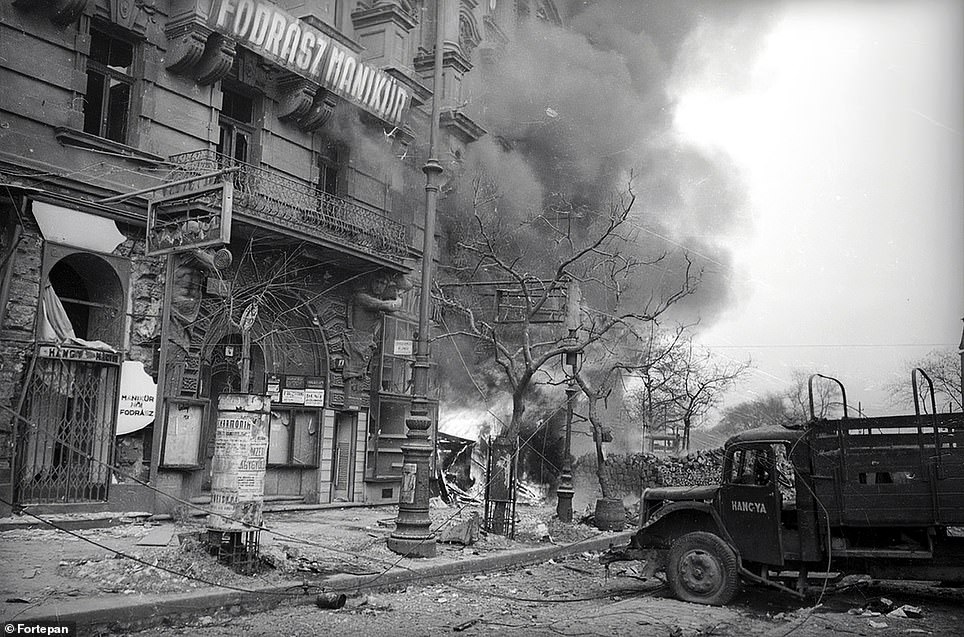 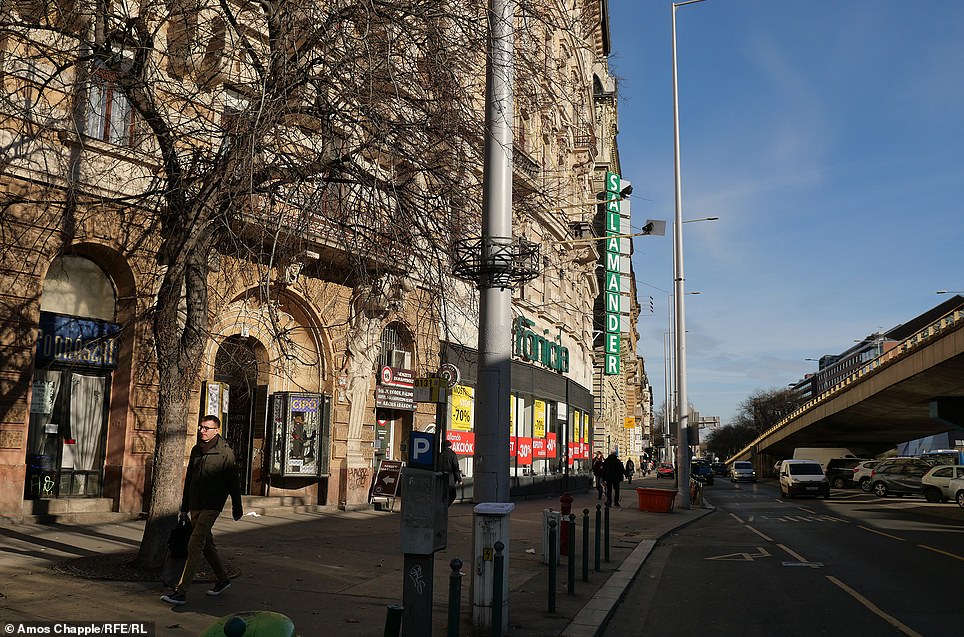 A shop burns as Soviet and Romanian troops surge into the city. Amos said: ‘When I saw the photos of Budapest lying in ruins after the war it just blew my mind’ 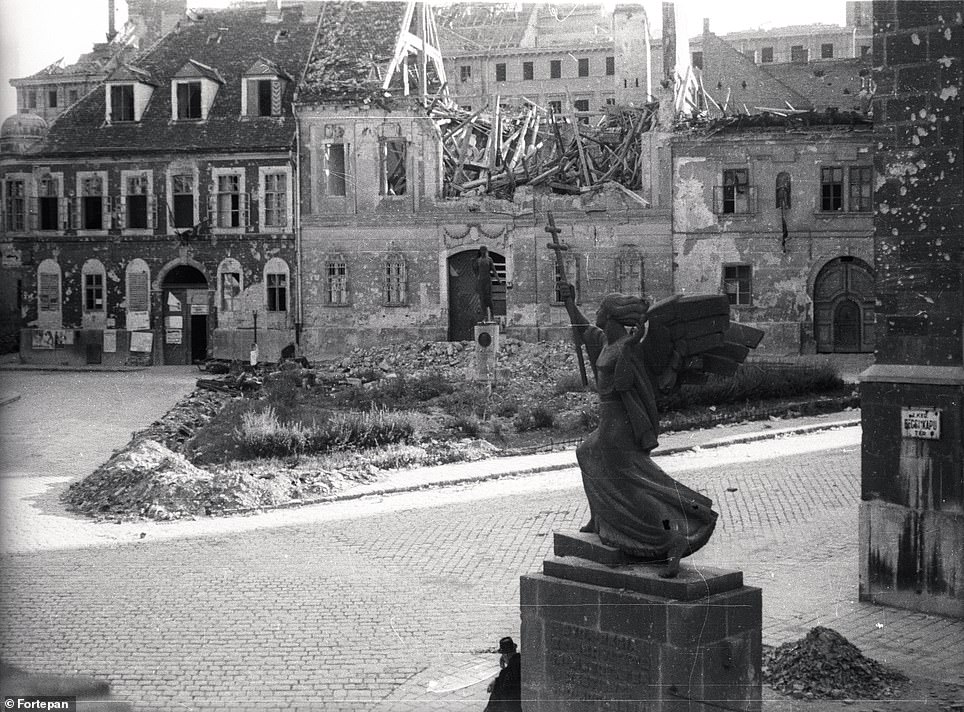 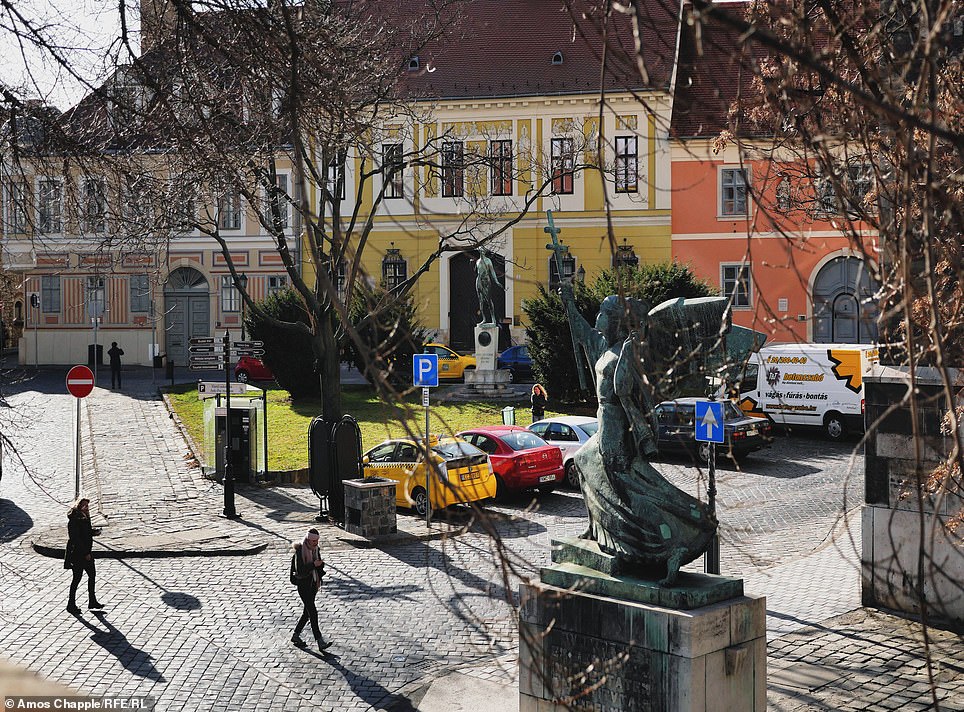 Amos said: ‘I remember shooting these pictures, looking at the grim archive photo on my hand, and up to the glorious modern city of today and just thinking how… we are incredibly lucky to live on this continent at this time’. Budapest is formed from Obuda, Buda and Pest

Buda Castle, to the left, along with other seriously damaged buildings. The scene today is utterly majestic 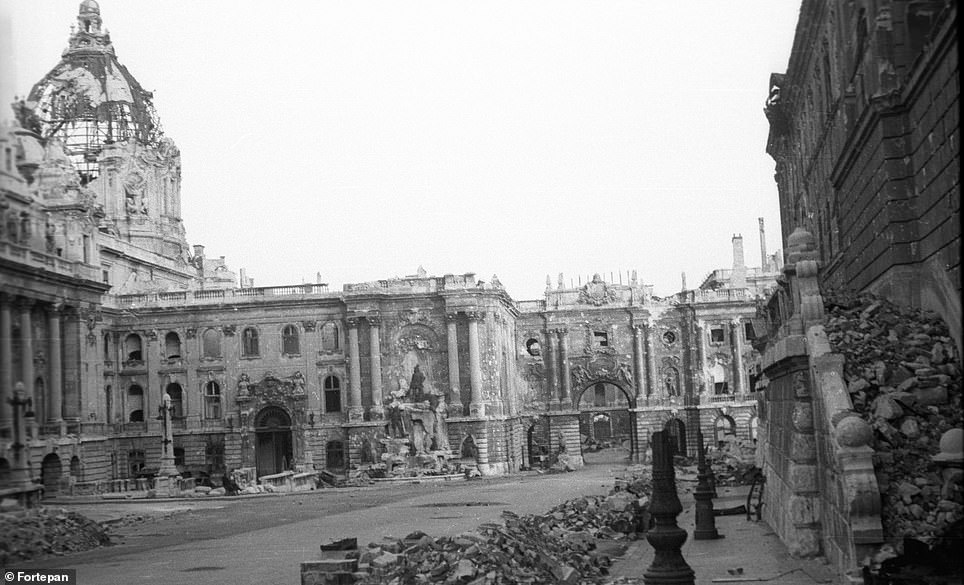 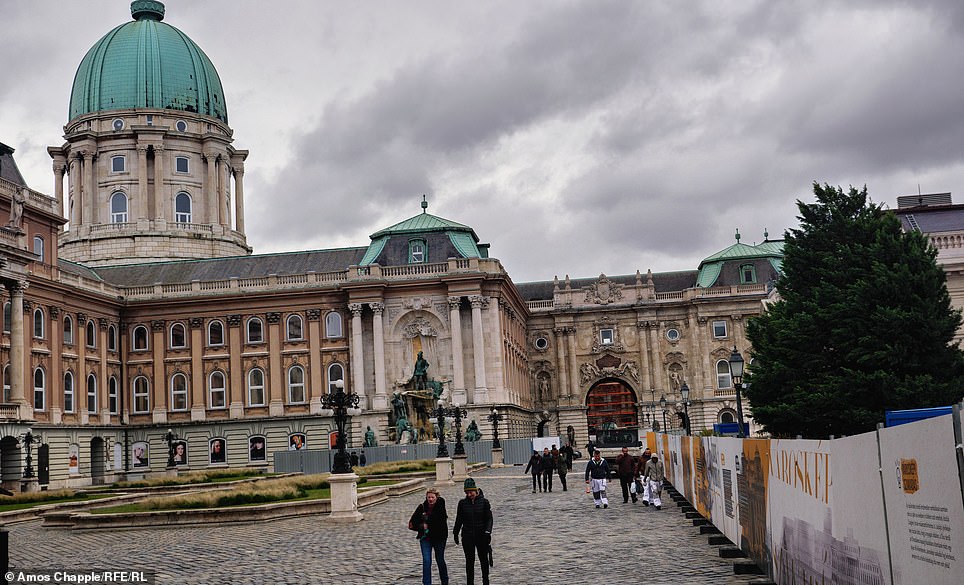 Buda Castle – also known as the Royal Palace – stands in ruins. It was listed as a Heritage Site by Unesco in 1987