Before-and-after pictures show how much Victorian England has changed, from Newcastle to London

If you want to see how England’s towns and cities have changed since Victorian times, there’s no need to invent a time machine and travel back to the 19th century.

Simply gaze upon these fascinating composite images. They merge pictures taken across England in the 19th century with present-day images snapped in the same spot.

The images focus on places including Bristol, London, Manchester and Newcastle, with many of them showing landmark buildings standing strong in the original locations.

The project was commissioned by On Stride, which is aiming to ‘inspire people in the UK to see their local towns and cities in a whole new light — and hopefully spark enough curiosity in readers to visit these places in person’.

To create the images, researchers found vintage photographs from the Victorian era of the towns and cities and with the help of local photographers, took a present-day shot from the exact same angle to show how the areas have changed over time before merging them.

Scroll down to see the Victorian era colliding with present-day architecture, transport, fashion and technology… 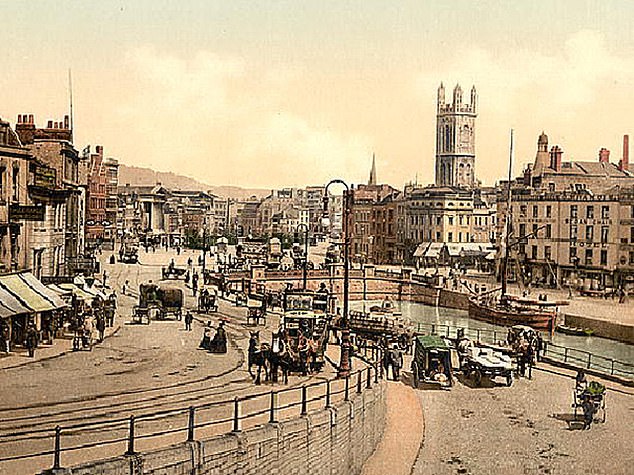 This picture of St Augustine Parade was snapped in the 1890s. St Stephen’s Church, which was built in 1470, can be seen dominating the skyline. For several centuries the church tower was a landmark that seafarers could use to guide themselves into Bristol Harbour 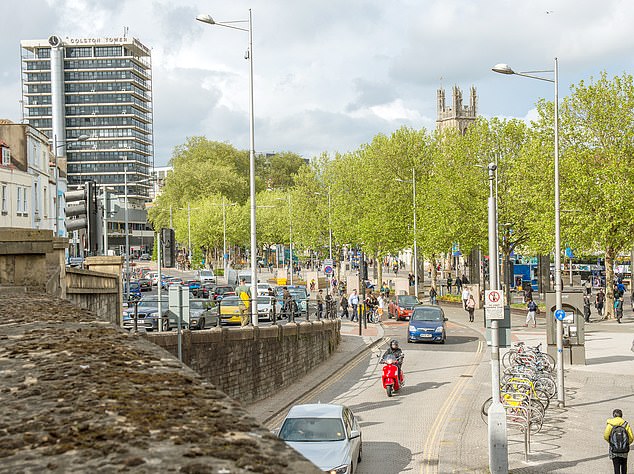 Today, St Stephen’s Church is dwarfed by taller developments such as Colston Tower. Another significant detail to have changed is the River Frome, which has disappeared from sight since this part of it was covered over in 1938. It was diverted and culverted to help boost trade around the harbour 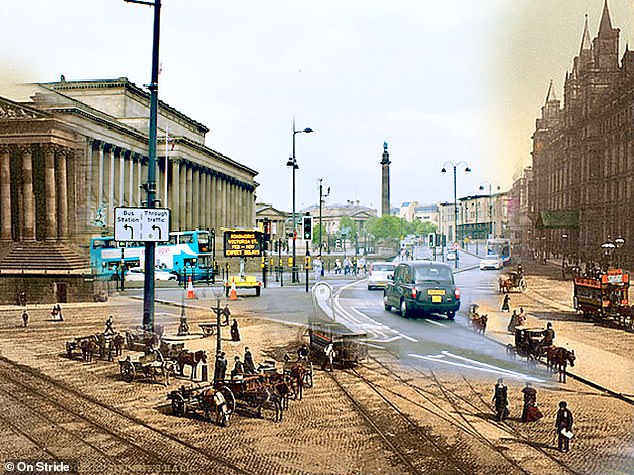 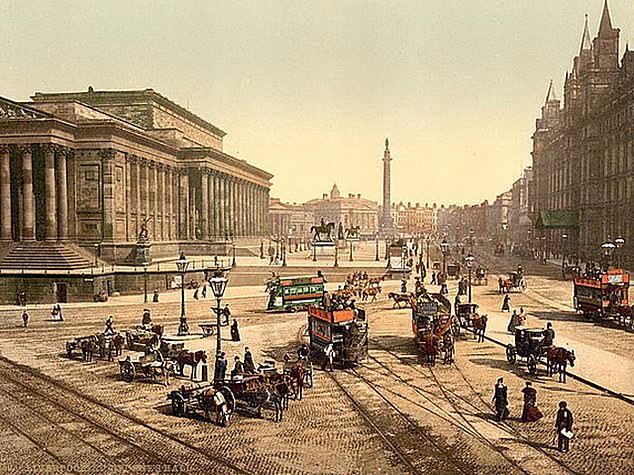 This image was taken in the 1890s, almost 40 years after the grand St George’s Hall opened in 1854. There is a persistent urban myth that it was accidentally built back-to-front 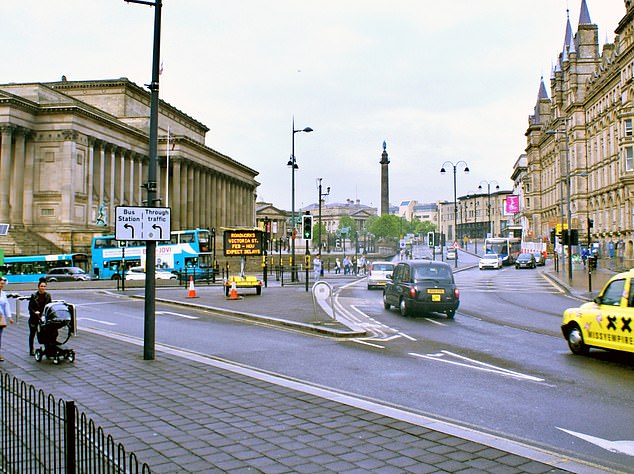 The area has been radically transformed. If you were to turn 180 degrees and walk into the shopping district, you’d find it barely recognisable compared to a decade ago – before the redevelopment of ‘Liverpool One’ 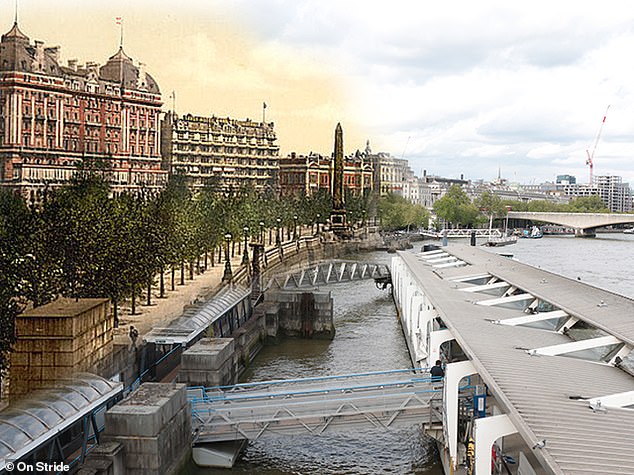 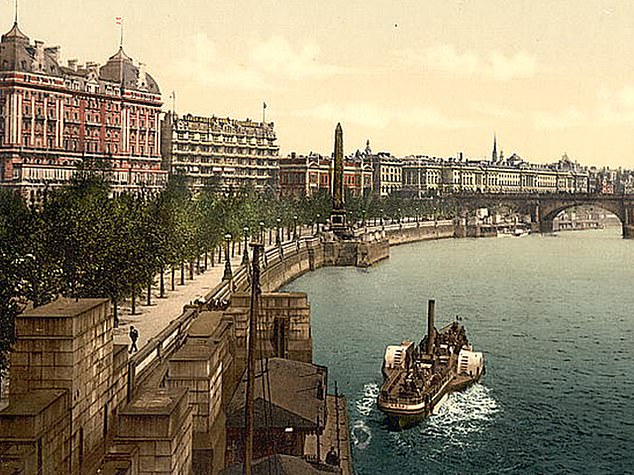 There’s a surprisingly ancient piece of history in this vintage photo of the Victoria Embankment. The obelisk centre-frame is the 3,500-year old ‘Cleopatra’s Needle’ offered by Egypt to Britain as a gift in the 19th century. It remains sadly overlooked in 2019. Officials are seemingly reluctant to celebrate the 200th anniversary of the gesture and one prominent Egyptian archaeologist,  Zahi Hawass, has said he is ashamed at the condition of the object 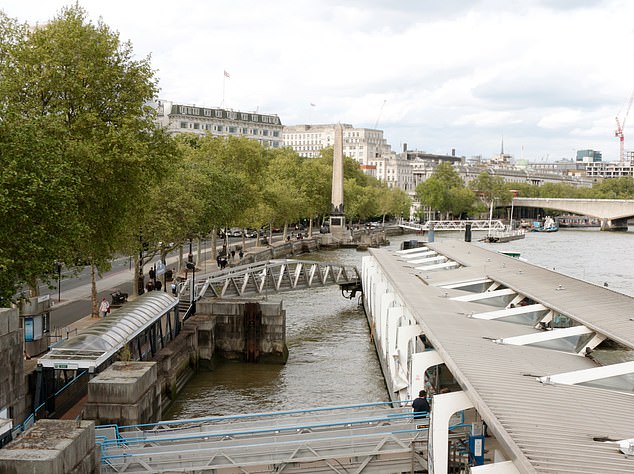 In the present day picture, Waterloo Bridge can be seen. The version in the Victorian photo was demolished in the 1930s and rebuilt by a team of women during the Blitz. It was the only Thames River bridge to incur damage from German bombs. More recently, it was the site of the major global warming protests of Extinction Rebellion 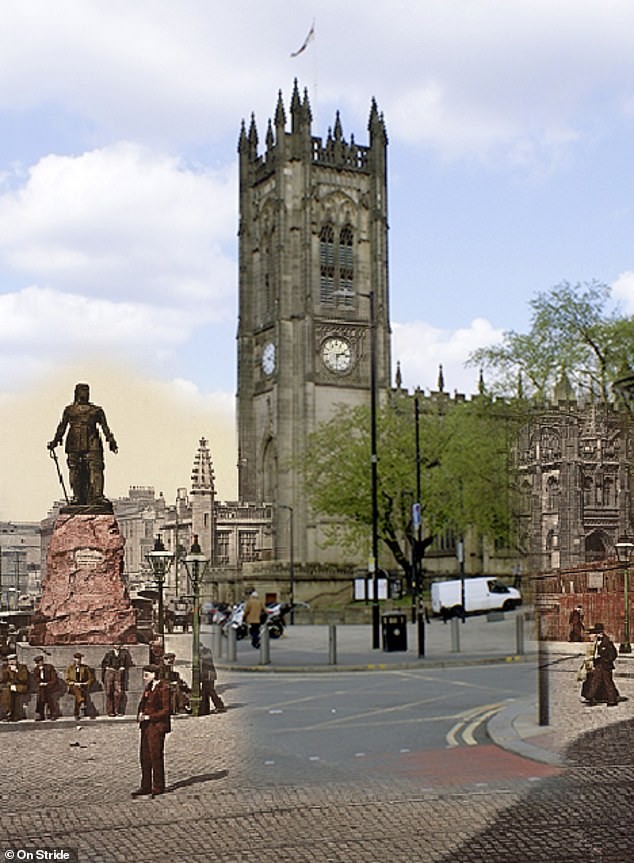 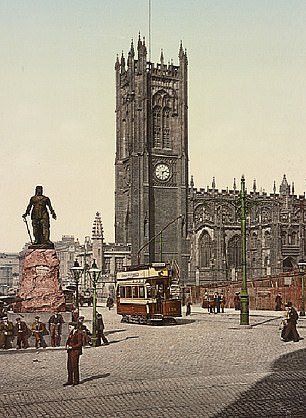 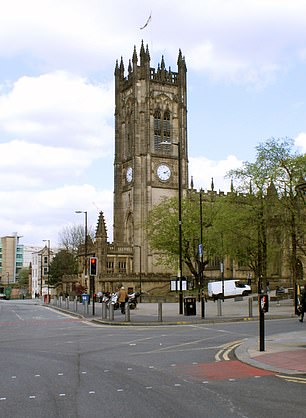 The controversial statue of Oliver Cromwell that disappears in the present-day photo, right, could be making a comeback. The statue was a gift to the city from Elizabeth Heywood, wife of 19th-century mayor Abel Heywood, in honour of her late husband Thomas Goadsby, the city’s previous mayor. But it was Cromwell’s political divisiveness as much as the serial mayor-marrying of Elizabeth Heywood that resulted in it being put on the street instead of its original destination inside Manchester Town Hall. Cromwell was relocated to Wythenshawe Hall in the 1980s but seems set to return to city life when the area around the 15th-century Gothic cathedral is redeveloped and rebranded as the ‘Medieval Quarter’ in the near future 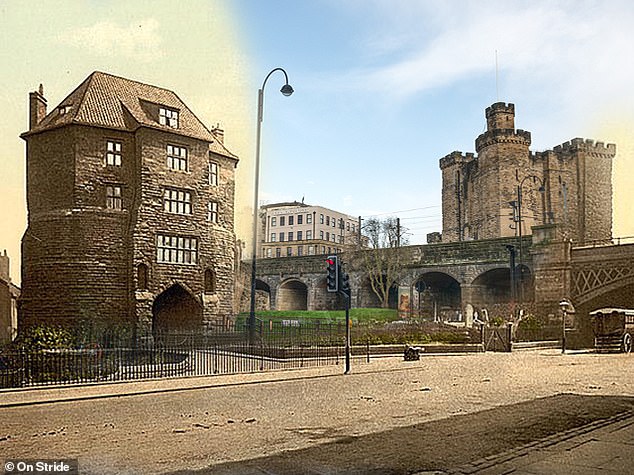 A merged image showing the Black Gate and Castle in Newcastle. The Victorian image was snapped between 1890 and 1900 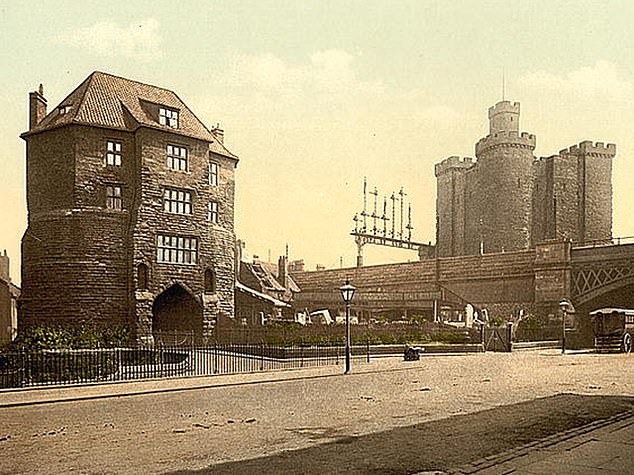 The Black Gate, built between 1247 and 1250, and Henry II’s 842-year-old castle (built on the site of the fortress that gave Newcastle its name), are listed buildings, so they haven’t changed much between Victorian times and now 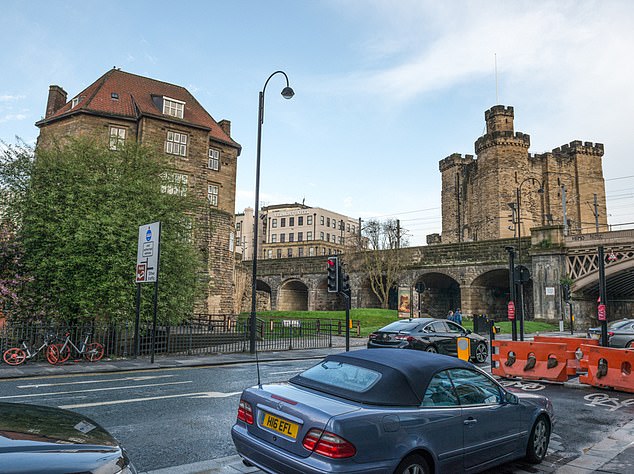 The most significant change today is the building that’s popped up between the Black Gate and the castle – and this one’s now listed too. Built in the classical style as the Northumberland County Hall in 1910 and expanded upwards and outwards in 1933, it is now a hotel. The bridge has become a railway viaduct for the East Coast mainline to Scotland 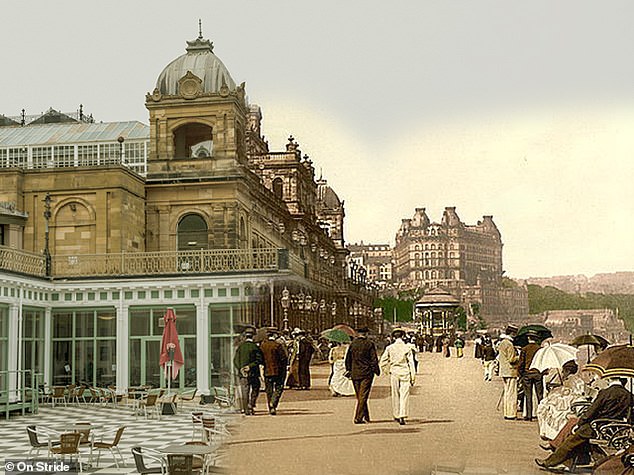 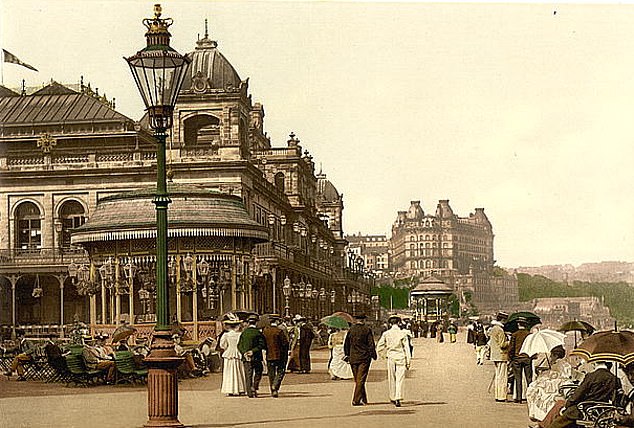 The city of Scarborough can trace its fortunes to the 17th-century discovery of a mineral spring with purportedly medicinal properties. Word spread and the spa became a fashionable tourist destination. Over the next two centuries a sequence of structures of varying impressiveness (beginning with a simple wooden terrace) overlooked the waters. With the arrival of a rail connection, the spa complex was built and then restored and expanded after a fire in the 1880s 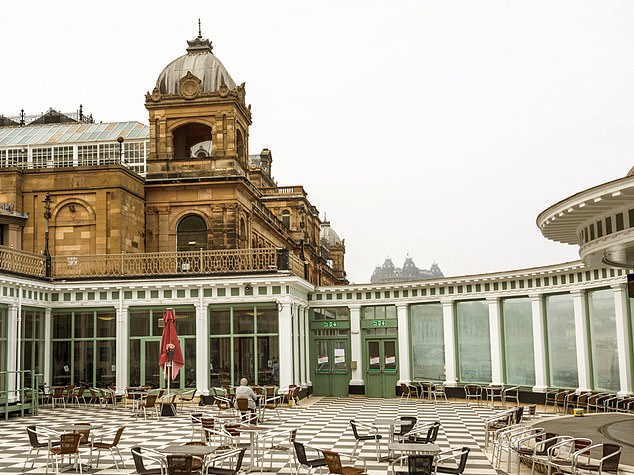 The key difference between then and today, pictured, is the appearance of the Sun Court, which is part of the huge multi-purpose Spa complex. It occupies the area where the promenade used to be. The Scarborough Spa Orchestra has performed there since 1912 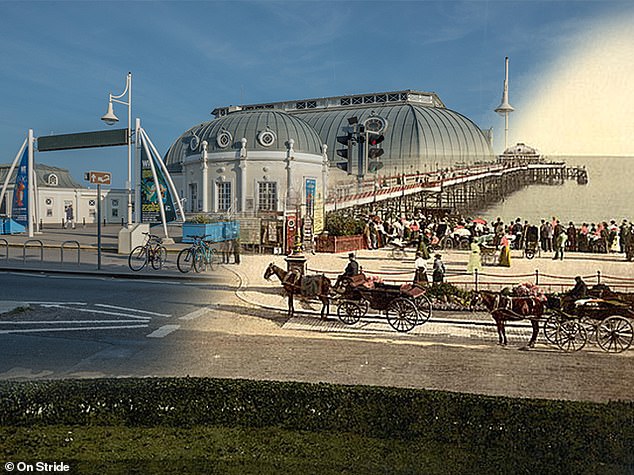 A merged picture showing Worthing Pier in Victorian times as well as the Pier Pavilion, which exists in the same spot today 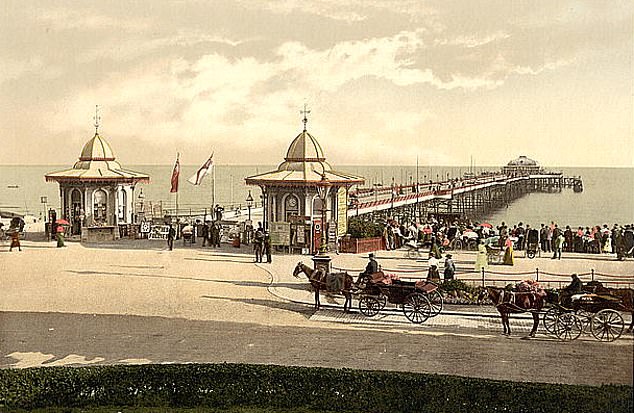 The pier at Worthing was opened in 1862, with the South Pavilion in the background added in 1889. Paddle steamers used to moor there. The pavilion survived a gale that washed away much of the pier in 1914 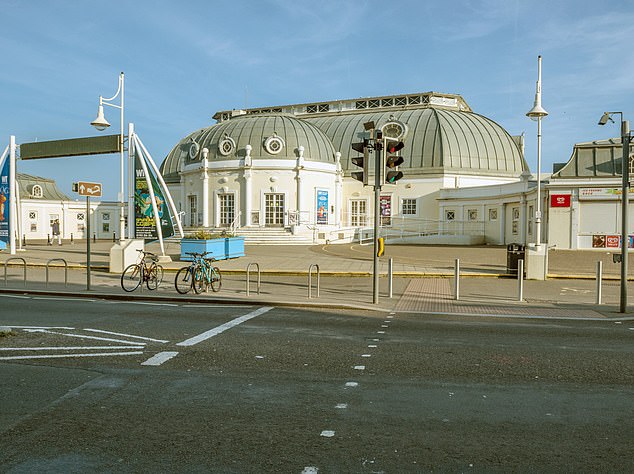 The South Pavilion disappeared behind the bigger and more modern Pier Pavilion, pictured, built at the shore end in 1926, which dominates today’s photo. In the 1930s, the South Pavilion was destroyed in a fire and passers-by hurried to dismantle the pier to stop the flames spreading to the new pavilion. The South Pavilion was subsequently rebuilt in a Streamline Moderne style. It later became a nightclub, before reverting to a café and entertainment venue. The Pier Pavilion is mostly in use as a theatre