Day one and our first family ski holiday is not looking promising. We’re in Lech and 13-year-old Clemmie is towering over toddlers on the ‘magic carpet’ conveyor belt, getting in tangles when they fail to get off.

My 11-year-old son Nathaniel is wrapped round a red cone, sliding down the mountain. Only the youngest, Angelica, nine, seems to have a clue.

My husband wears the expression of a man vindicated — he always thought introducing three children to skiing at the same time was going to be an expensive mistake.

Top of the world: Catherine took her children skiing for the first time in likeable Lech

But I wanted my urban children, who have barely seen snow, to do something outdoorsy in the freshest air. A friend insisted Austrian instructors are the tops: ‘Perfect English, never get cross, sense of humour.’

And I have a hankering for Lech. Snow-globe pretty, it has a glitzy reputation: Princess Diana skied here with her two boys, the Dutch royal family come. But you could wear ski clothes older than the EU here and no one would notice.

This year there is huge excitement because finally the resorts of Zurs, Lech and St Anton are connected, creating Austria’s largest ski area.

Not that such scope is much use yet to the three temperamental learners we have put in the hands of local instructor Thomas Pilcher.

By the first afternoon — after a cheese and ham toastie and a hot chocolate — Thomas is suggesting taking them up the mountain. 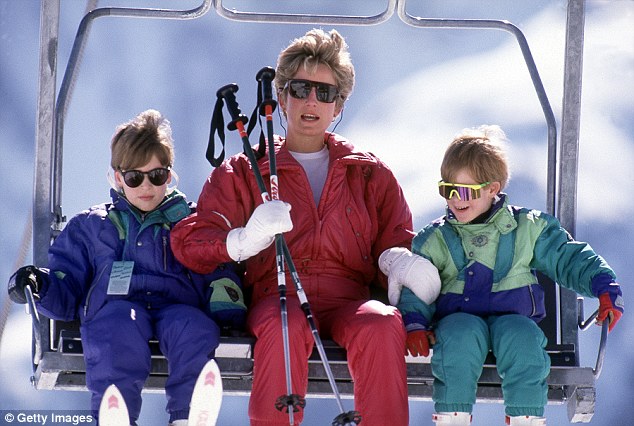 Firm favourite: Princess Diana with William and Harry during a skiing holiday in Lech, April 1991 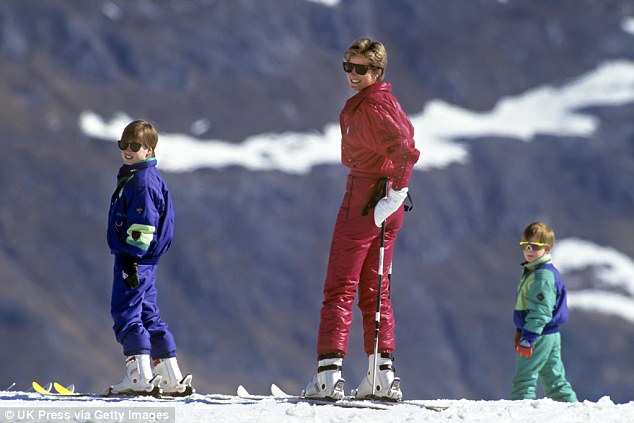 Sloping off: As well as British royals, the resort is also popular with the Dutch royal family

It doesn’t look as if they can even stand up on their skis to me, but he thinks they will concentrate better without us parents.

Two hours later, we reconvene. The oldest is teary and tells me the other two ‘have already cried’.

One was dragged a few feet up a slope by a button lift because she didn’t ‘realise you were not allowed to sit down’, another dropped their poles off a chair lift.

A woman shouted at one of them, saying: ‘You shouldn’t be up here.’ You can see her point. But Thomas tells them: ‘You will get into the flow of it.’

Day two and the children are groaning and comparing bruises. Only the promise of Nutella pancakes for breakfast gets them out of bed.

We are staying in comfort at the Hotel Kristiania, set up by local Olympic champ Othmar Schneider and run by his daughter Gertrud. 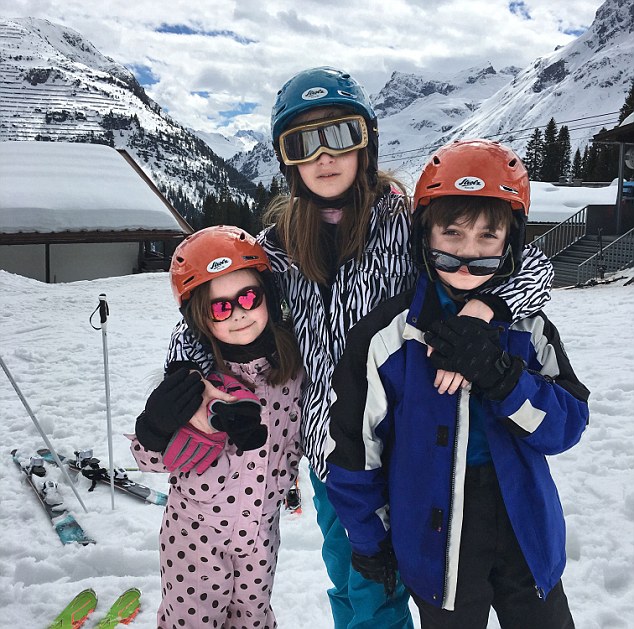 Early stages: (From left) Angelica, Clemmie and Nathaniel all had lessons in Lech 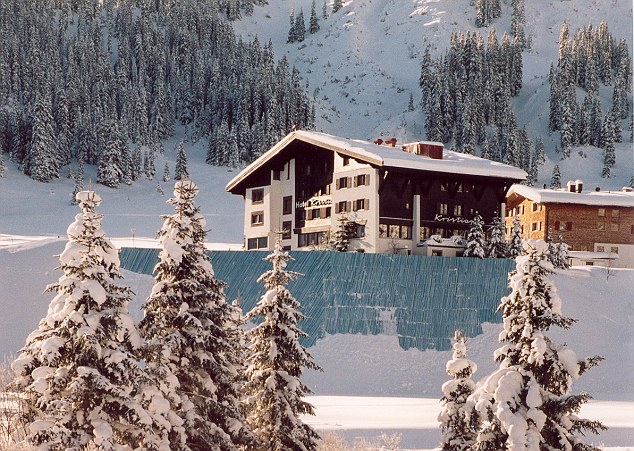 Winter wonderland: Catherine stayed in comfort at the Hotel Kristiania 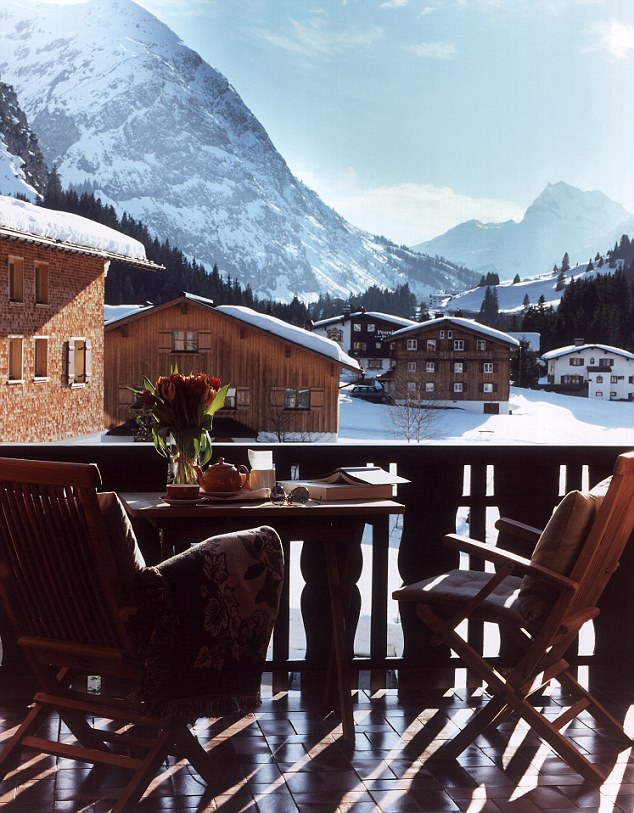 Eye-catching: The view from Hotel Kristiania is a winter classic

It is warm wood, modern art, comfy beds, affable staff and exquisite food (a hearty fondu is a big hit with the children).

All the bedrooms are different: ours is a tapestry, damask and chandelier homage to Marie Antoinette.

The children eventually perk up on the slopes. They follow Thomas religiously, making pizza-style turns, and listen to him as if their lives depend on it.

When they are on a smooth piece of gentle piste and hum the James Bond theme tune, they begin to get the point.

There is sibling strife, however, as the youngest is doing everything first. When she has a topple, her sister says: ‘She was getting blasé.’

Nathaniel begins to get quietly efficient. For Clemmie, it’s all about controlling fear. ‘I am willing myself to be reckless,’ she says. 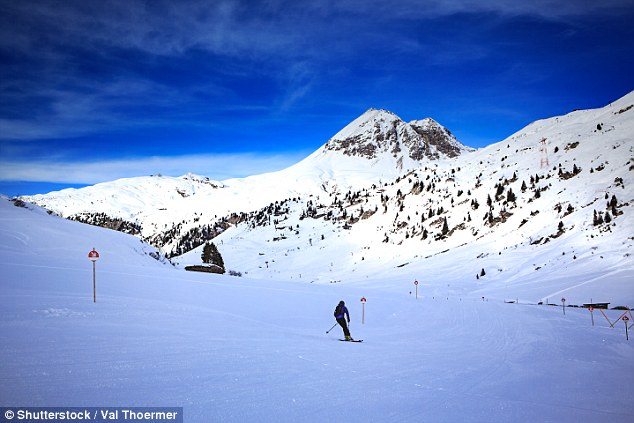 Joining the dots: This new ski season is one of huge excitement because the resorts of Zurs, Lech and St Anton are finally being connected, creating Austria’s largest ski area

Then there’s tobogganing. For around £4, you get unlimited goes down the Oberlech run, a 1.2km track through the forest. The two youngest disappear down a hole and have to be pulled out.

Given that most of the week has swung between hilarity and tears, the last day seems miraculous.

I am watching my three children in a line skiing down a mountain slope in the sunshine. They want to go up again, again and again.

‘You’ve created a rod for your own back,’ says my husband.

Turns out Lech was the perfect place to learn. It’s not called the cradle of Alpine skiing for nothing.

Travel Facts: Make your own downhill dash in Lech