It’s 2.40am, Laura’s guests have all left her London flat in Crouch End. All except one, Danny from Essex, who has spent the evening looking at her.

He’s half drunk, swigs lager from the can and has a huge ketchup stain on his shirt. She hopes he’ll stay for one more drink.

But what on earth does this beautiful, successful managing director see in this sweaty, divorced oaf with low self-esteem, a passion for Scotch eggs, and who is back living with his mum? 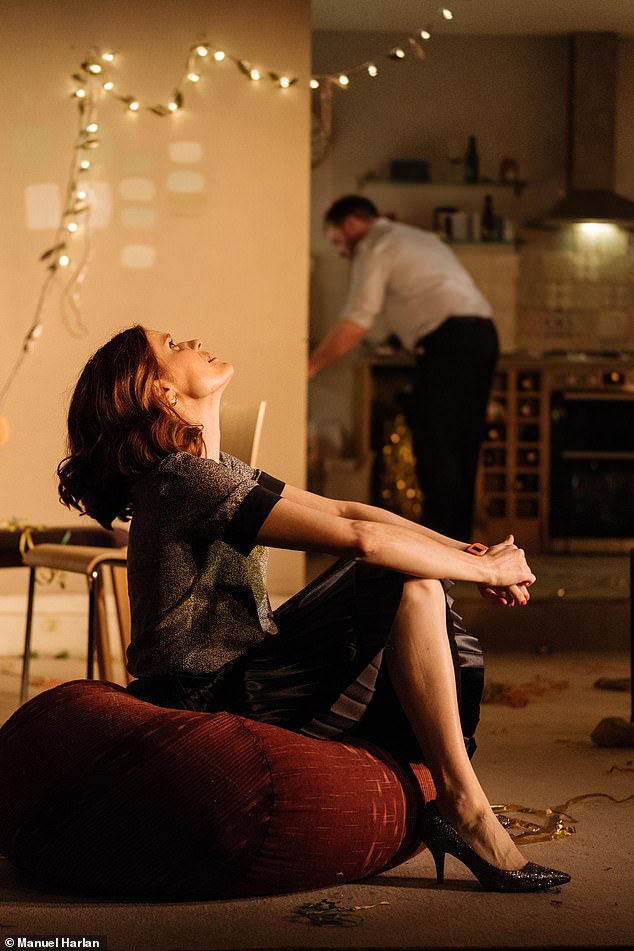 Justine Mitchell as Laura in David Eldridge’s new play, Beginning. Her solo dance to Bros puts you in mind of Mike Leigh

They have only one thing in common – the dull ache of loneliness. What Laura, 38 and broody, wants from Danny is to be kissed; for him to stay over and make the baby she craves.

The trouble is they are so different. Politically correct, metropolitan Laura and laddish Jamie Oliver fan Danny are from separate planets. David Eldridge’s play milks the difference.

As wine gets sloshed about, souls are bared and the two edge towards each other. Justine Mitchell’s more assertive Laura makes the running, while Sam Troughton’s Danny is almost visibly wrapped in coils of inhibition. 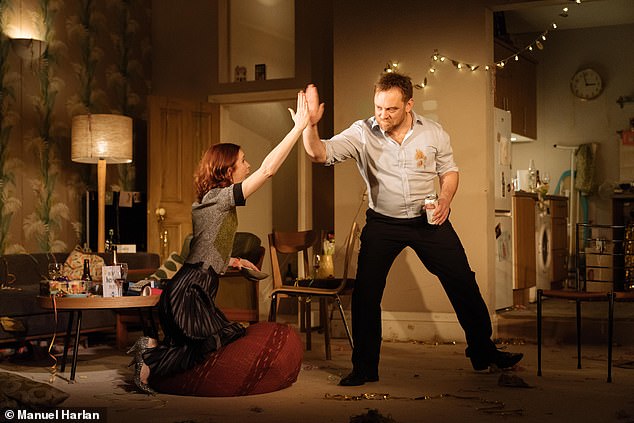 Justine Mitchell as Laura and Sam Troughton as Dan share a high five. They have only one thing in common – the dull ache of loneliness

It’s quite funny, near the knuckle, the writing shot through with speeches of intensely felt longing.

But it’s also long-winded and a bit old-hat. The embarrassed body language, the class divide, Laura’s solo dance to Bros put you in mind of Mike Leigh.

As they beat about the bush, a moment of trust occurs over two disgusting fishfinger sandwiches before, just possibly, a happy ending.

Jennifer Saunders is back in the West End for the first time in 25 years, and I would have given this production of Oscar Wilde’s 1892 hit a thumbs-down if it weren’t for her performance as the feather-hatted society battleaxe the Duchess of Berwick.

She’s a hoot, gliding about the stage, neck frozen, face in grin-and-bear-it mode.

She has the play’s funniest line: Australia is a place whose skies, she believes, are filled with ‘kangaroos flying about’. 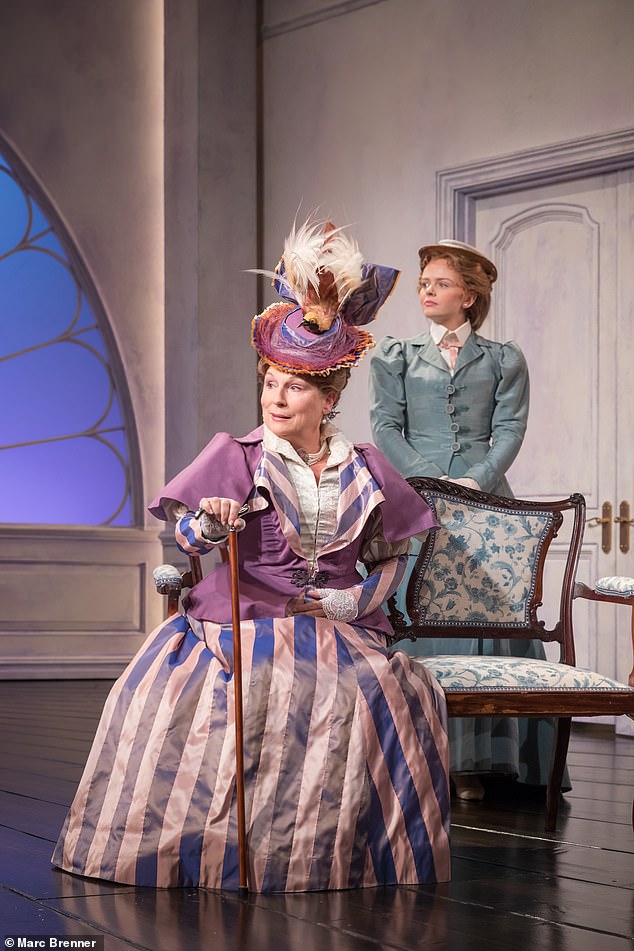 Jennifer Saunders as the Duchess of Berwick. She’s a hoot, gliding about the stage, neck frozen, face in grin-and-bear-it mode

The show is directed by Kathy Burke, who treats this Victorian play as if it was a Ray Cooney sex farce.

In a musical interlude, written by Burke, Saunders sings a ditty, warning chaps to keep their hands off her fan.

It’s one way, I suppose, of flogging tickets for this slightly creaky melodrama about a young society mother who believes her husband is having an affair with Mrs Erlynne, a woman with a past. 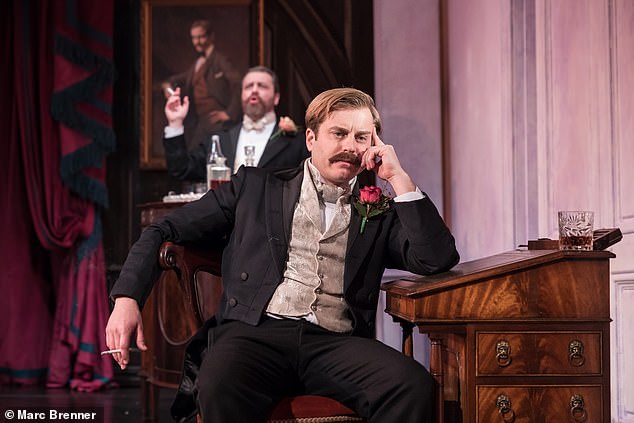 Kevin Bishop (as Lord Darlington) has the famous line ‘We are all in the gutter, but some of us are looking at the stars’

In fact the suspicion is totally unwarranted. Lord Windermere is actually trying to protect his mistaken wife.

Nobody writes better about human suffering than Wilde. Samantha Spiro, as the supposedly scarlet woman, has clearly felt ‘the sting of life’.

But the director’s chance to lift the evening into something genuinely moving is never grasped.

Grace Molony gets some mileage out of the bloodless Lady Windermere. But the chaps are all hopeless, and none manages to make Wilde’s witticisms take flight.

Kevin Bishop (as Lord Darlington) has the famous line ‘We are all in the gutter, but some of us are looking at the stars’.

Here there’s only one star – Saunders. Her fans will love it. Wilde purists won’t.