Body language experts are commonly hired by those law enforcement and dating industries –  but few are aware of their importance in the hospitality industry.

Veronica Fil, 35, from Melbourne, Victoria, is a restaurant consultant and behavioural economist that is often referred to as a ‘restaurant mentalist’.

With a background in psychology, she teaches wait staff how to understand customer’s body movements.

‘I train front of house teams and restaurant management to communicate more effectively with their guests, how to stay in control of a situation when things don’t go according to plan, and how to make their guests feel like they’ve been transported to another world, if only for a couple of hours,’ she told FEMAIL.

Veronica Fil, 35, from Melbourne, Victoria, is a restaurant consultant and behavioural economist that is often referred to as a ‘restaurant mentalist’ (pictured)

Ms Fil works for a restaurant in Melbourne called Lûmé and her current role came about when Executive Chef Shaun Quade complained to her about front of house staff.

He told her they were lacking confidence, getting clunky with their service and missing the cues their guests were giving them, such as knowing when someone was still hungry, too full or looking for the wine list.

‘Now, I think of the restaurant floor as a stage. For our staff, when those doors open each night, the show begins,’ she said.

‘So the first thing we did was introduce an acting coach to work with our team, helping them to move more gracefully across the room, watch their audience’s reactions and adjust accordingly, project their voices and improve their posture.’

Ms Fil said there are a variety of body language signs she teaches the staff so they can learn to pick up signs intuitively. 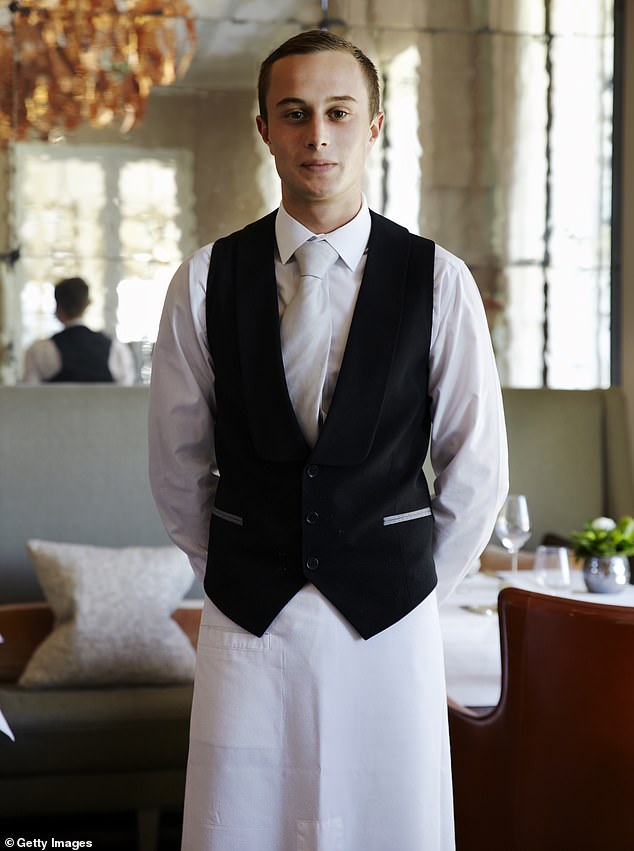 This enables staff to better judge when to approach a table, whether or not guests are having a good time and how icy a situation really is.

Most people know that staff should look out for diners who appear bored or are clearly scanning the room to capture a server’s attention but there are a bevy of other things to consider.

One of Ms Fil’s main tips for servers is that they look at the positioning of guests’ feet under the dining table.

‘Whatever’s happening on the surface might not be the reality of things so a good way to test the vibe of a couple of diners is to look at their legs and feet,’ she said.

‘Those on positive terms will be leaning into one another, perhaps their knees or feet are touching, or angled towards each other.’ 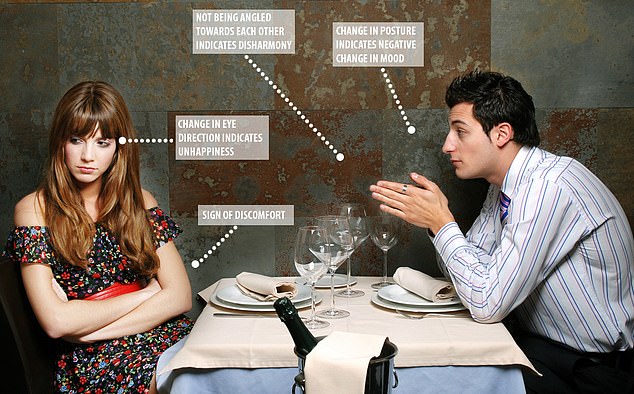 What body language do staff look out for?

– Particular signs of discomfort they pay attention to is customers rubbing their foreheads and jiggling their foot.

– Staff have to pay attention to changes in behaviour, such as difference in their tone, volume or posture.

Even if a couple isn’t talking to one another, and are focused more on their phones than each other, looking at the direction of their feet may indicate that they’re ‘blissfully content’.

Particular signs of discomfort employees have been encouraged to look for are customers rubbing their forehead, touching the neck, fiddling with a necklace or jiggling their foot.

Although it’s all well and good to look for these signs, Ms Fil said it’s important that employees set a behavioural baseline for each guest.

‘A really easy way to tell if something is not right, perhaps they’re not telling the truth, or they are unhappy or uncomfortable or angry, is to look at the sudden difference in their behaviour,’ she said.

‘To recognise this you must have made a conscious effort to observe them at their natural state first.’

Ms Fil said this means people need to pay attention to any sudden changes in their pace, volume or tone of voice, their posture, eye direction and positioning of their hands, arms and feet. 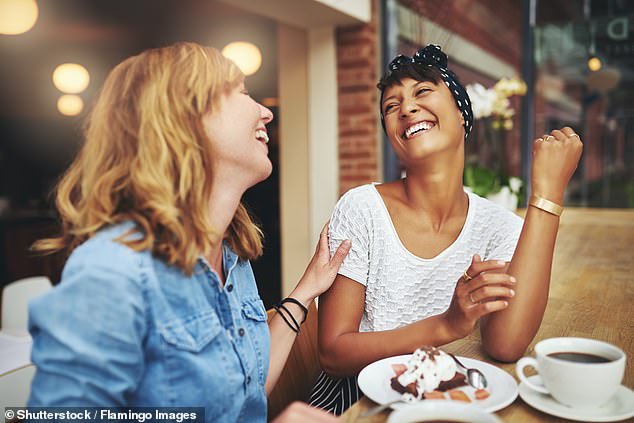 What are the subliminal tactics they use?

‘We worked on the subliminal aspects of the restaurant, such as the weight of the cutlery and how it affects the diner’s perception of flavour and the quality of the meal,’ she said.

‘We also pay attention to the language we use to describe dishes and wine and the way we script the experience.’

Ms Fil said that for a restaurant such as theirs a great deal of work goes into researching and understanding the tastes of their diners each night.

‘Simple things such as knowing their favourite wines, whether they’re right or left handed so the correct table setting is ready before they arrive and any known aversions to certain ingredients, which we can find out thanks to social media,’ she said.

‘In my role consulting, I help restaurants set up the right technology so that they can keep track of their diners, and create extra special experiences using that information.’

‘We don’t actually tell the staff that they’re being taught this stuff, that’s far too intimidating and I think would put some people off learning the techniques,’ she explained.

‘Instead we just talk about communication skills and how to build confidence – not just personally but within the team.’

Another technique they work on to enhance the guest experience is known as a ‘pattern interrupt’, which they call a ‘palate cleanser’ at the restaurant.

‘There’s infinite ways of doing this, but the idea is to break the individual’s thought pattern the moment before they enter the venue, with something unexpected that completely distracts them,’ she said.

‘Perhaps they bump into a stranger the moment before they walk through the door who hands them a treasure map and tells them to protect it before running away or they see a man wearing an oversized dinosaur costume standing on the footpath having a cigarette just before they enter the restaurant.’

The rationale is that an individual’s mood can make a huge difference to how much they’ll enjoy themselves at a restaurant.

If they’ve had a great day, they’ll inevitably be more open, more patient and in a more positive mind set to have a good time.

Conversely, if their day has been awful, Ms Fil said they tend to bring those emotions with them when they come to dine.

When people are in in that mood they are more likely to criticise the dishes, be impatient and leave negative online reviews.