Sean Cox was welcomed back to Anfield with open arms by the Liverpool players on Sunday.

It was his first time back at the stadium since he was assaulted by a Roma fan prior to the Champions League semi-final back in 2018.

The 53-year-old father of three was the victim of an attack and suffered life-changing injuries from the unprovoked assault last April and made an emotional return to the Liverpool ground as guest of honour. 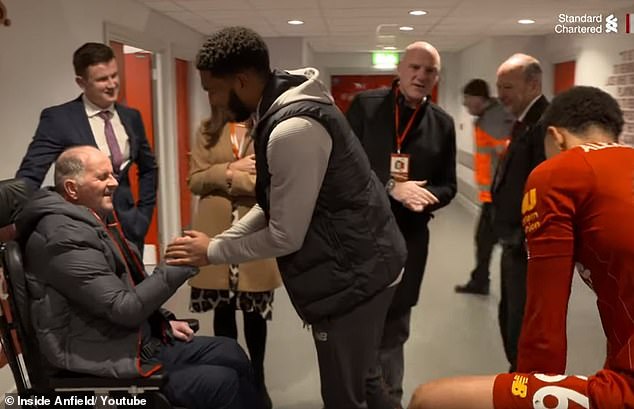 Following 18 months of recovery at a rehabilitation centre in Sheffield he was able to go and watch his beloved Reds beat Manchester City 3-1 in a crucial encounter at the weekend.

After the game, a number of Liverpool players stopped by to have a word and embrace.

Trent Alexander-Arnold was the first to say hello and Cox shook his hand before sharing a picture with the right-back. 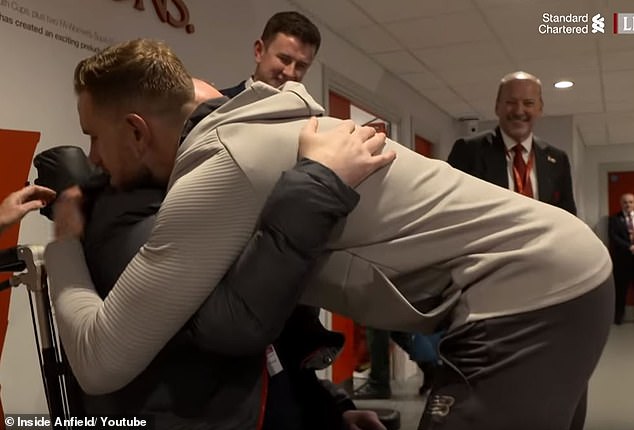 Joe Gomez and Jordan Henderson then followed suit, giving the supporters a hug as they greeted him. The footage was revealed by the club on their YouTube channel.

Cox’s wife, Martina, also went out onto the Anfield pitch during the half-time interval.

It was a day of celebration for Liverpool, not only in securing a key three points but in welcoming Cox back to the club.

Jurgen Klopp described him as ‘inspirational’ and added: ‘He was very happy to see me, but I was much happier to see him!

‘His wife and son were there as well, it was a wonderful day as well. If he moves to Liverpool he gets a season ticket 100 per cent!’