Beijing looks to save £3.2tln in foreign reserves from sanctions in the event of a military conflict

Is China preparing to invade Taiwan? Beijing orders officials to find ways to protect the nation from western sanctions like those used against Russia

Chinese officials are looking at ways to defend the country from economic attack if the West should look to sanction China in the same way it did Russia — stoking fears the nation is preparing for an invasion of Taiwan.

China’s regulators held an emergency meeting on April 22 between officials from China’s central bank, the finance ministry, domestic banks operating within China, and international lenders such as HSBC.

The West’s harsh economic sanctions on Russia prompted the emergency meeting, with the Ministry of Finance stating that President Xi’s administration had been put on alert by the surprise dollar freeze.

The news comes as the UK and the US held top level talks on how to manage a crisis in Asia, should China invade Taiwan.

China claims Taiwan as part of its territory despite the island nation functioning under a separate government since 1949.

Taiwan President Tsai Ing-wen (right) speaks to United States Senator Lindsey Graham (left) and other US officials during their visit inside the Presidential office in Taipei. China’s regulators held an emergency meeting on April 22 between officials from China’s central bank, the finance ministry, domestic banks operating within China, and international lenders 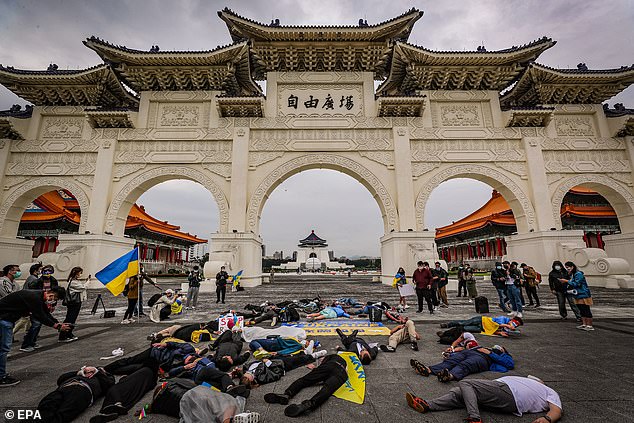 People lie on the ground to portray dead people in front of the Liberty Square during a protest in Taipei against Russia’s invasion of Ukraine. Chinese officials are looking at ways to defend the country from economic sanctions if the West should look to sanction China in the same way it did Russia

The US is thought to be considering proportionate sanctions on China in the event it invades Taiwan, envisioning a similar scenario to the one playing out in Ukraine.

WHY IS CHINA WORRIED ABOUT FOREIGN CURRENCY SANCTIONS?

Russia has approximately $630billion frozen in place by foreign sanctions, a buffer fund designed to help it prop up the value of the Rouble.

But Russia is only the world’s seventh biggest holder of foreign currency reserves, making it less vulnerable to such sanctions than countries more reliant on the international system.

China, by contrast, is the world’s largest holders, according the IMF, carrying a whopping $3.2trillion in foreign currency reserves.

After its economic miracle which propelled China to become the world’s second largest country, China’s sustained its growth by increasing exports to the rest of the world.

A key element of the expansion was in copying Western products, finding ways to produce them in greater quantities, and then selling them back to the West at cheaper prices ⁠— boosting the Chinese economy.

One of the ways China is able to maintain cheap prices is by keeping the renminbi less valuable than the US dollar, for which it was labelled a currency manipulator.

Most countries allow the exchange rate of their currency to be decided by international lenders, but the People’s Bank of China only allows the dollar to be exchanged for a fixed amount of renminbi — a lower amount than would be accepted without government intervention, keeping Chinese goods cheap and competitive.

But such a tactic forces China to hold more dollars than it would otherwise, leaving it with an enormous amount of dollars.

Because of its export market, China now owns about 3.68% of the $28.9trillion US national debt, making it vulnerable to the same kind of foreign asset freezes placed on Russia’s central bank.

‘No one on site could think of a good solution to the problem,’ the Financial Times quoted a source as saying. ‘China’s banking system isn’t prepared for a freeze of its dollar assets or exclusion from the Swift messaging system as the US has done to Russia.’

China is looking to expand the amount renminbi in circulation relative to its US-dollar holdings.

One idea was to force exporting Chinese businesses to ditch their dollar holdings in exchange for renminbi.

Another suggestion was to cut to the $50,000 quota that Chinese nationals are allowed to purchase every year for overseas travel, education and other offshore purchases.

Other potential solutions such as swamping some US dollar holdings for Euros were not thought to be practical, but some doubted the US would have the capacity to sanction China — the world’s seconded largest economy — in the same way it did Russia.

‘It is difficult for the US to impose massive sanctions against China,’ said Andrew Collier, managing director of Orient Capital Research in Hong Kong. ‘It is like mutually assured destruction in a nuclear war.’

Although Chinese businesses have refrained from overtly doing business with Vladimir Putin’s regime since he gave the order to invade Ukraine, President Xi Jinping has reportedly retained some economic ties with Russia.

The US is looking to boost cooperation with European allies, as well as engaging with Japan and Australia after Beijing stepped up military activity.

‘Deterring Chinese aggression against Taiwan is in everyone’s interest. It is not just an Indo-Pacific issue, it is a global issue,’ said Heino Klinck, a former top Pentagon Asia official. ‘US military planners are not counting on Germany or France sending warships, or Britain sending a carrier in the case of a conflict over Taiwan.

‘But when those countries send ships to the South China Sea, or transit the Taiwan Strait, it sends a strong signal to China.’ 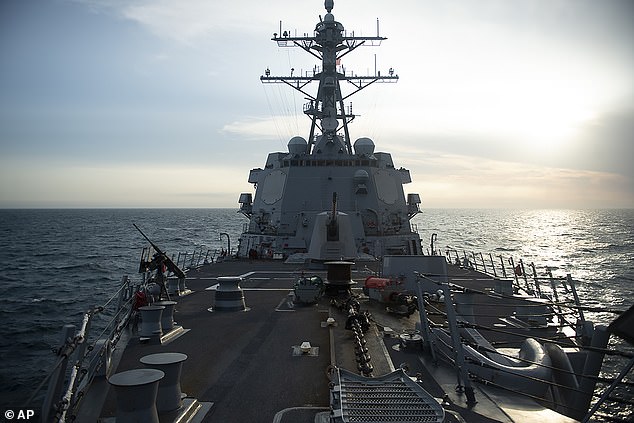 Why China set its sights on Taiwan

Taiwanese soldiers hoist the flag of Taiwan in Taipei on May 10. China considers Taiwan as a part of its territory, but many Taiwanese people want the island to be independent

China and Taiwan have a long-standing dispute over the island’s sovereignty.

China considers Taiwan as a part of its territory, more precisely a province, but many Taiwanese want the island to be independent.

The island was under the Republic of China’s ruling after World War II, with the consent of its allies the US and UK.

The leader of the Chinese Nationalist Party, Chiang Kai-shek, fled to Taiwan in 1949 and established his government after losing the Civil War to the Communist Party and its leader Mao Zedong.

Chiang’s son continued to rule Taiwan after his father and began democratising Taiwan.

Taiwan today, with its own constitution and democratically-elected leaders, is widely accepted in the West as an independent state. But its political status remains unclear.