Being home with the children and doing the housework made me feel like a drudge, said Thatcher

They are words that could come from a 21st Century feminist grappling with the competing demands of a high-powered career and motherhood.

But, astonishingly, as far back as 1954 – long before the notion of whether women can ‘have it all’ was first debated – a young Margaret Thatcher was espousing her own work-life balance philosophy.

It was a time of conformity and rigidly defined gender roles. Female politicians were scarce but, as the world knows, nothing would stop the grocer’s daughter from Grantham reaching the top.

Then aged 28, Mrs Thatcher shared her views on juggling a legal career with motherhood in a surprising article for a Tory Party publication, even revealing how doing housework and looking after children left her feeling ‘nothing more than a drudge’.

At the time she was a newly qualified barrister with eight-month-old twins, Carol and Mark, and had already fought two elections.

As a result, she was often asked: ‘How do you find the time?’ Offering typically no-nonsense advice, she wrote: ‘You can achieve as much in a day as you set out to achieve if you think ahead and get everything well organised.’

The answer might also serve as her blueprint for running the country, although Downing Street would be another 25 years away.

In the article, Mrs Thatcher expanded on her ruthless work ethic, saying that women should ensure things are done ‘with maximum efficiency in minimum time’.

These days busy professionals are likely to order their weekly supermarket shopping online. But back in the early 1950s, Mrs Thatcher had her own system.

‘Shopping which can be done by phone is done that way after having a word with the butcher or other merchant about the quality and service that I like,’ she wrote. 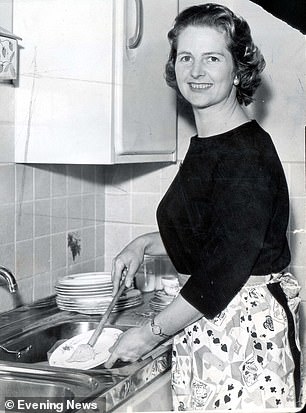 Margaret Thatcher in her kitchen doing the washing up in 1959

‘All cookery operations are carried out in the best order so that not a minute is wasted. I quickly found that as well as being a housewife, it is possible to put in eight hours’ work a day besides.’

In fact, those who wondered how she coped were as much a mystery to Mrs Thatcher as she was to them.

‘There are 24 hours in every day: the people who ask this question seem to be amazed at how much can be packed into them; I am astonished at how little some people seem to do.’

The article, Finding Time, in a pamphlet called Onward, was unearthed during research to mark the centenary of the Conservative Women’s Organisation. It addressed many of the arguments still discussed about women in the workplace.

By the time it was written, Mrs Thatcher had already attracted media interest as the youngest woman candidate in the General Election four years earlier, though it would not be until 1959 that she became an MP. Before entering Westminster, she continued with her legal career and raising her children. But anxious not to decry stay-at-home women, she said: ‘I do not mean that the housewife has a slack time!

‘For a short while after our twins were born, I was without help and had to do everything myself including three-hourly feeds day and night, so I know how exhausting children and housework can be! As well as being exhausted, however, I felt nothing more than a drudge.’

Her husband, Denis, whom she had married in 1951, was a successful businessman.

She added: ‘I had little to talk about when my husband came home in the evening and all the time I was consciously looking forward to what I called “getting back to work” – namely, to using some of the mental resources which I had been expressly trained to use for years.’ 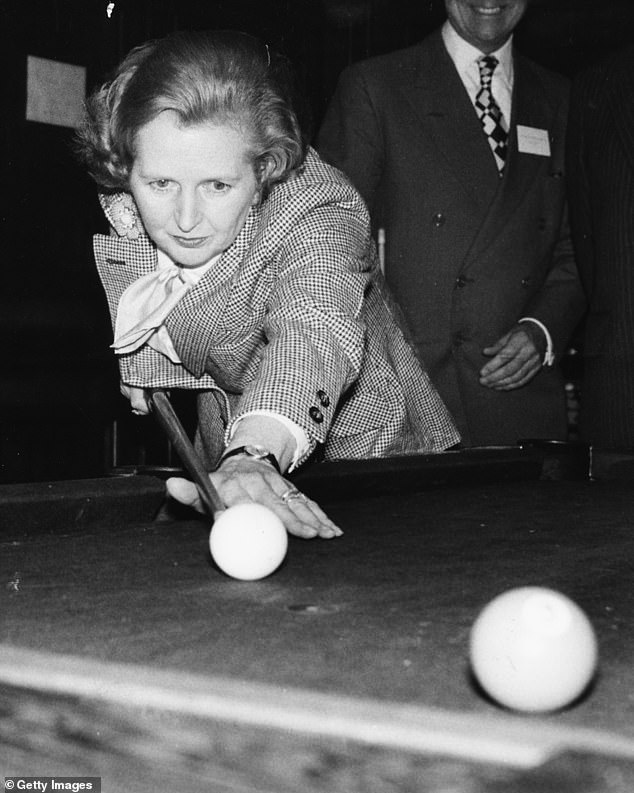 Margaret Thatcher trying her hand at a game of pool during a Briefing Conference for Prospective Conservative Euro-Candidates, at the Penta Hotel in London, February 27th 1979

Elsewhere, she told of the need for ‘having trusted and competent help with the children. Without this it would be impossible to go out with an easy mind. Some husbands can fortunately provide for this while in other cases the wife has to do so out of her earnings.’

On the ‘important question’ of how families are affected by working mothers, she said: ‘The answer depends entirely on the woman concerned. If she has a powerful and dominant personality, her personal influence is there the whole time and the children’s upbringing follows the lines which she directs.

‘From my own experience, I feel there is much to be said for being away from the family for part of the day.’

Concluding her article, Mrs Thatcher said it was possible for women to have it all, but it depended on the individual: ‘If she has no particular outside interest and finds her work in the home satisfying and absorbing then she must develop her interests from that.

‘But if she has a pronounced bent in some other direction in which she has already achieved some measure of success, then I am sure that it is essential both for her own satisfaction and for the happiness of her family that she should use all her talents to the full. With a little forethought she will find that most things are possible.’