Footage believed to be the closest captured during the devastating blast in Beirut shows the blaze that triggered the explosion.

The blast, which killed more than 130 people, wounded thousands and left tens of thousands homeless, is believed to have been caused when a fire touched off a stockpile of 2,750 tons of highly explosive ammonium nitrate that authorities left sitting in a warehouse for years.

A couple who were near to the warehouse when the fire broke out captured the billowing clouds of smoke from their balcony before an initial explosion went off, which sent panicked locals fleeing. 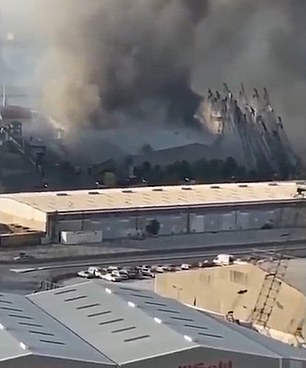 As they observe the fire, the woman remarks: ‘Is it possible these cars are so close?’

‘How should I know?’ her partner replies.

‘So unfortunate, hopefully nothing happened to anyone, dear God,’ she remarks. ‘Dear God, hopefully no one is harmed.’

She then comments: ‘We’re now giving you something live.’

She then says in Arabic: ‘Seriously. How come no one except us are filming?’

A low rumbling sound can then be heard in the video, and the woman grows concerned as she says: ‘What is that sound? Go inside, go inside! Imad, go inside.’

The smaller explosion is seen in the video, with sparks flying into the air, as the woman implores her husband to go inside.

‘Oh poor thing! Dear god! Poor thing!’ she can be heard saying. ‘This is a big thing, dear God hopefully no one’s hurt.’

She then continues to ask her husband to come inside and close the door.

However he carries on filming the scene until the final, huge explosion sends them both reeling backwards.

The couple reportedly suffered injuries in the blast but both of them escaped with their lives. 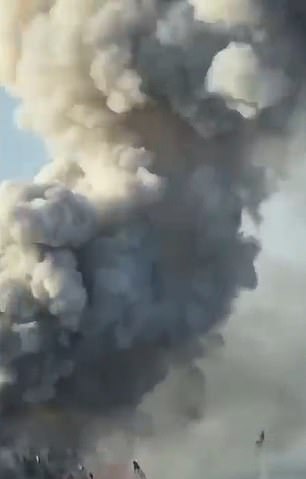 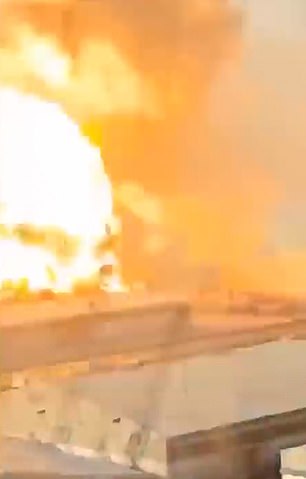 The husband carries on filming the scene until the final, huge explosion sends them both reeling backwards

The explosion on Tuesday night, which was the size of a small nuclear bomb, has left at least 137 people dead and a further 5,000 wounded.

There are now thought to be 300,000 left homeless and wide-spread damage estimated at up to $5billion – including a 120-metre long cruise ship which capsized as a result of the blast.

Cypriot police say they have questioned a Russian man over alleged links to a ship and its cargo of ammonium nitrate said to have caused the devastating explosion.

The explosion has threatened to reignite anti-government protests in Lebanon that have been ongoing since last year amid allegations of entrenched incompetence and corruption.

Emmanuel Macron offered France’s support for the Lebanese people as he visited Beirut on Thursday, but warned the country would ‘continue to sink’ unless its leaders carry out reforms.