BEL MOONEY: My mum put me into care, then rejected me years later

Thought of the week

Do you ever wake in the morning and ask yourself if you’ve lived the best life you could have lived? Not morally. Or not only morally. Just squeezed the most out of your opportunities?

From The Finkler Question by Howard Jacobson (2010)

When I was six I was taken out of school by two ladies who said I was going on holiday. One of my teachers was crying.

I was taken into care. I missed my mum, older sister and grandparents (who we lived with — my father was dead), but was told Mum had decided I should stay where I was. I spent the next ten years in different children’s homes and schools.

I was never kissed or hugged again. At 16, ‘they’ decided my education was over. I was found a bedsit, taken for an interview for a crumby job and that was that. Social workers visited occasionally until I was 18 and then I was on my own. In my early 20s I got an HND at night school and became a planning engineer.

I was solitary — you don’t form relationships in care because you know you’ll be moved on. Still, I got married when I was 26; we bought a nice house and had three girls I love more than my own life.

But I never forgot my family. I never ceased to wonder why Mum had given me up. I’d made four attempts to contact her but failed.

I was 30 when I received a short letter from my mother through social services. She wanted us to meet in her home town. Bursting with excitement, I travelled there but she didn’t show up.

A few months later I received a note containing arrangements for another meeting.

In the cafe I recognised her and my sister straight away and thought my heart would burst. But they were very aloof. Mother said my grandparents had made her give me up, because there wasn’t room for all of us in the house.

Emotionless, she told me she had two boys, two and four years younger than me. She had remarried months after I was put into care.

Knives twisted in my stomach. I learned my mother was divorced, moderately wealthy, and that my sister and the two other children had been to university. I thought: ‘Why didn’t you give me those chances?’

They had no interest in my life or family. We arranged to meet a week later, but only my sister showed. She said my mother had decided against any relationship with me.

That was 25 years ago and it’s gnawed at me ever since. Nine months ago, I got a terse letter from a solicitor acting for my sister and her brothers. It told me of my mother’s death and said any claims I might make against her estate would be contested, as she acknowledged no emotional bonds with me. I was dumbfounded.

This was the last stab at my heart. I cried buckets. Why did they do that?

This week, Bel Mooney advises a reader whose mother put him into care and then rejected him years later

You wrote a detailed email (three times as long as I have room for) which left me feeling desperately sad, yet full of admiration, too. And honoured that you wrote.

There’s a quiet strength in the telling of your story that belies the emotional weakness you describe.

Truly, it’s quite impossible for me to make sense of the way your mother treated you, or why the sister (ten when you were sent away) should have no vestigial feeling at all for the six-year-old boy doomed to feeling abandoned for the rest of his life. How can that ever be understood?

Sometimes, seeking reasons condones wicked behaviour. You didn’t actually ask me for help, even though the act of writing reveals how you still feel excluded from your own life — yes, in spite of your happy marriage and beloved (now married) daughters.

Your sincere intention is to warn others who grew up in care: ‘Just because you desperately miss your family, don’t be too sure that they miss you. Be very wary before you make contact, because you might just be giving them the opportunity to reject you all over again.’

Wise advice springing from the deep wound. I knew someone who found his birth mother again after being (happily) adopted and found the experience sad and rather disappointing.

The phrase ‘be careful what you wish for’ is relevant here, isn’t it? I hope readers will think about that and realise how your counsel is relevant to all those wistful for a fantasy, alternative life.

But let us just contemplate your life now. The unnecessary cruelty of that solicitor’s letter, arriving after 25 years, has set you on the old rack once again. But you will survive this as you did all the rest. You are the same amazing, strong person who survived rejection, instability, loneliness.

You studied hard with no help, gaining qualifications and a good job; you overcame self-protective wariness to fall in love and marry; you fathered three lovely daughters and created a happy, successful life.

Once you were rejected, yes, but now I am asking you finally to allow your blessings to outweigh the pain. Just add it up: two women, mother and sister, were loveless, hard, cold, cruel. But four women (your wife and daughters) are brimful of love for you.

Those first two show as nothing on the scale. The second four (and their husbands, and — hopefully — children) represent riches piled at your door. Embrace all that, Aidan — and be proud.

I’m in love with a toxic, married cheat

Nine years ago I lost both my parents, moved to the other side of the country and met a married man I connected with like no other guy. He said he’d never been so real and honest with anyone — and promised that when his kids were older he would leave home to be with me.

When he was with his wife I was lonely and emotional and went out drinking. I’d randomly kiss other guys trying to forget the pain.

Now this married man will say he can’t trust me because I kissed other people. He makes me feel worthless, but I can’t let him go.

I broke away for two years — even started seeing a new guy for six months but ended it, telling him I was still in love with this married man. I was recently diagnosed with depression.

This man continually pushes me away, then contacts me and pulls me back. As soon as we are apart I’m sad again. He says he can’t let go either but he will never trust me. I have never felt so broken. I need help.

Just imagine if those addicted to obsessive, destructive love could attend meetings like alcoholics, telling their stories to the similarly afflicted.

Would their fellow sufferers be more toughly prescriptive than psychotherapists and other members of the listening profession are trained to be?

Would they call each other deluded fools? Would they tell you: ‘Lady, if you have any self-respect you delete his number now, then step away from that phone?’

More from Bel Mooney for the Daily Mail…

Would they say if you don’t have that strength of mind and spirit, if you are so feeble, so wedded to what you call love, so needy of punishment . . . then, in truth, you have made yourself deserving of your own brokenness?

Jasmine, I would never judge anybody for falling in love with the wrong person. It happens all the time — and while it can lead to tears, deceit, pain and broken marriages, it can also result in great happiness. That’s how it has always been, and always will be.

So far, so very human. You must have felt so alone at the loss of your parents and been open to a new relationship that seemed to offer comfort. But nine years?

You broke free for two years from this demanding, manipulative hypocrite. And then you ditched the new lover and went scurrying back under the door of your prison, squeaking about love and waiting for more crumbs to be dropped.

Did you say a humble ‘sorry’ to your married man for good measure? No wonder he ‘can’t let go’. He has a sex slave.

This is the point (you have to see this) where such behaviour can be judged as obsessive, compulsive, masochistic . . . or whatever label you choose.

Instead of letting your depression diagnosis define you, it seems to me you could look up self-defeating (or masochistic) personality disorder and see how far you fit the criteria. You will find it interesting.

So what next? You certainly do ‘need help’, so I would suggest counselling to try to understand your addiction to this entirely unsuitable and destructive ‘relationship’.

Do you have friends to talk to, or have you dropped the honest ones who always told you bluntly that you have been a fool?

Listen, ‘I can’t let him go’ is an absurd statement. That can be judged.

People can’t help disabilities or the fact that they were treated appallingly by terrible parents (see today’s main letter) but, my goodness, do they ever make the best of their lives in spite of the hand they were dealt. But you . . . you have absolute freedom of choice.

And finally… Art really is good for the soul

Unexpected requests can lead to revelations. So it was when art historian Laura-Jane Foley invited me to record a podcast for her series, My Favourite Work Of Art. I wasn’t even sure what a podcast is!

I knew I mustn’t overthink my choice. What first popped into my head took me back to the very beginning of my love of art. The painting is Virgin And Child In Glory, by the 17th-century Spanish artist Murillo. Why choose this over hundreds of (finer) works I’ve loved since? 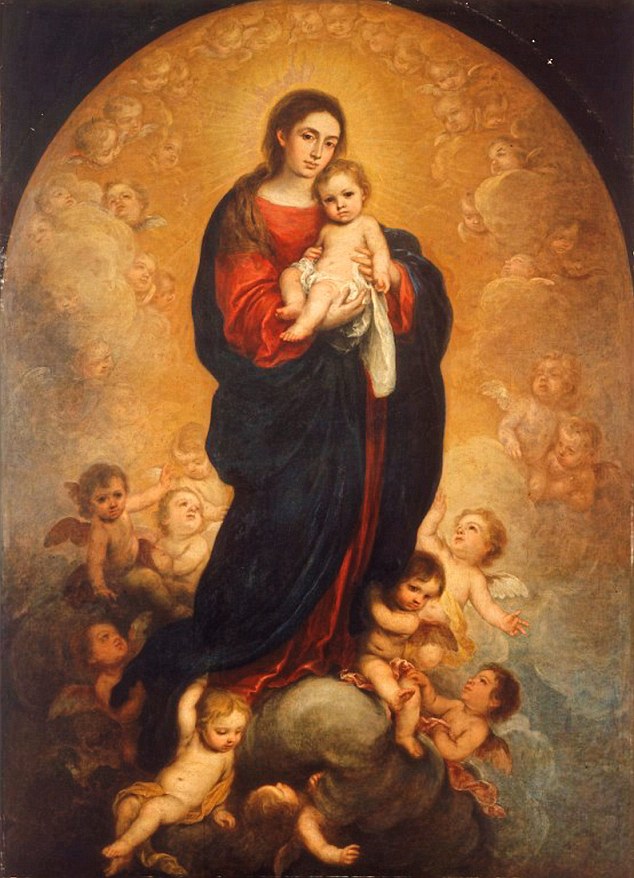 Bel’s favourite painting is Virgin And Child In Glory, by the 17th-century Spanish artist Murillo (pictured)

Because when I was 11, I’d take the bus to Walker Art Gallery in Liverpool and of all the wonderful art I discovered, this painting provided the sweetest consolation. I’d stare at Mary’s beautiful face and silently tell her my troubles. I loved the innocent cherubs at her feet and believed baby Jesus was looking straight at me.

A pseudonym will be used if you wish.

Bel reads all letters but regrets she cannot enter into personal correspondence.

It’s interesting to focus on one work of art and ask why it draws you. It could be something simple like the blaze of gold that’s Van Gogh’s Sunflowers. Or maybe you love a great painting of horses by George Stubbs.

My own choice told me a lot about the sense of isolation I felt as a child, but also the origin of my current pride in Christianity. Now ask yourself what you would choose …

I’ll always be grateful that the Walker (and Old Swan Public Library) shaped my soul. So why not visit your nearest art gallery to discover what might be waiting for you?

To listen to the podcast, log on to acast.com/myfavouriteworkofart