They were still glued to the same, unyielding plastic seats where I’d found them the previous evening – a group of grounded travellers for whom Christmas was in danger of being cancelled.

At the end of the row were two elderly women from Hertfordshire – one with high blood pressure, the other arthritis – who ought, by then, to have been basking in the Mediterranean sunshine.

Having sat, bolt upright, all night, waiting forlornly for a message from their tour operator about the Air Malta flight that should have left Gatwick at 11.55am on Thursday, they had finally been told they could fly at noon yesterday.

Well, that is, if they could make a mad scramble through the holiday motorway traffic and get to Southend airport, 65 miles away.

Anne Lowe and Rebecca Jenkins (pictured), from Hertfordshire, were meant to be basking in the Mediterannean sunshine but sat bolt upright all night waiting for news of their flight

‘We’re just not doing it,’ Anne Lowe, who is in her late 70s, was saying fretfully to her friend, Rebecca Jenkins. ‘We’d never make it. We’re not like these young ones who can run to the gate pushing their luggage. We’ll just have to go home.’

Further along was Roger Budden, a baleful-looking retired chemist from Portsmouth, who’d been hoping to make a few friends on a singles’ break in Lanzarote and faced his own dilemma. Should he hang around in the hope his plane might leave, or fork out £128 for a cab home and risk losing any hope he might have of claiming compensation?

Squashed between them were retired warehouseman Michael Smurthwaite, 70, and his wife Linda Smurthwaite.

Their story was the most poignant of all. In May their 33-year-old daughter, Charlotte, had uprooted from Nottingham and gone to work in a hotel in the Red Sea resort of Marsa Alam.

They had missed her badly, these past eight months, and had set their hearts on spending the holiday with her, but now – thanks to ‘some idiot playing stupid games’ – the reunion was in danger of being sabotaged.

‘We are so looking forward to it, so I’m not giving up yet,’ said Mrs Smurthwaite, who had chosen a striking pink jersey and a sparkling necklace for the long-anticipated airport reunion.

‘I’ve got all her Christmas presents in there,’ she added, gesturing towards the purple suitcase that had served as her foot-rest for the 23 hours she and her husband had been marooned in the stifling confines of Gatwick’s South Terminal.

‘I’m still hoping to give them to her, but we just don’t know what’s going to happen – everything is up in the air at the moment.’

When I gently pointed out that nothing was up in the air, except perhaps a phantom object, the group broke into laughter.

It was this sort of gallows humour that had sustained them through the discomfort and grinding monotony of their interminable wait.

They had suffered their fate with a forbearance that would not have gone amiss in 1940.

For amid the anger, the despair and the exhaustion of tens of thousands of passengers at Gatwick this week, there has been a heartening Blitz spirit which has united strangers in their hour of crisis. They have helped one another to make alternative travel plans, shared news of the latest developments on their phones, taken turns to go on coffee runs.

For many, the Christmases they had planned might have been ruined, yet with their camaraderie they were creating their own uplifting festive spirit, albeit beneath the garish yellow signs of an overrun airport.

Heaven knows they needed one another – for, as I was repeatedly told, they got shamefully little assistance from the airlines, tour companies, and airport staff. 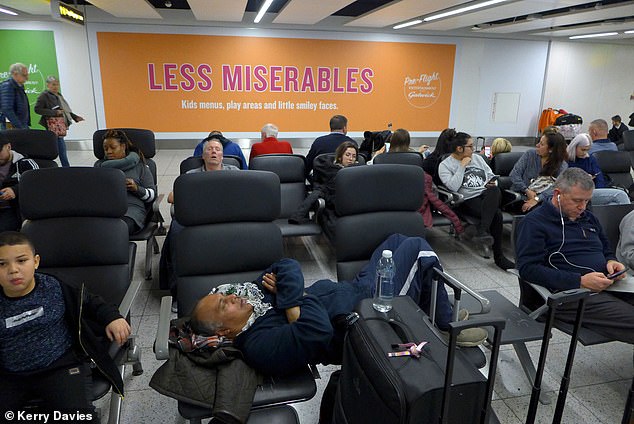 Les Miserables: Fed-up passengers try to get some rest under an unfortunate advert as they wait for updates at Gatwick Airport amid further chaos on Friday

Though the restaurants and bars stayed open throughout Thursday night, passengers received refreshment vouchers worth just £5 or £10 – the latter was only enough to get you a soft drink and a panini at the Wetherspoon’s.

The only contented customers in the thronging terminal pub were a huddle of nightshift baggage handlers, who took advantage of their inertia by indulging in a drinking session.

As for the information that becomes the lifeblood of stranded travellers – keeping up their hopes and helping them make the crucial decision of whether to give up and go home – it was virtually non-existent.

The lucky ones received a text or leaflet, and at the terminal entrance there was a sign stating the obvious – that flights had been ‘disrupted’ and suspended for safety reasons.

By yesterday morning, there were more staff in high-viz yellow jackets than you get on a Balfour-Beatty construction site, and more clipboards than you see in an NHS hospital.

But when I asked one ‘helper’ the simplest of questions – where might I find a departures board showing the current status of outbound flights – she stared at me blankly and sent me in the wrong direction.

The result was utter chaos, particularly in the check-in area where hundreds of people milled about in aimless confusion.

At least, yesterday, things were beginning to move again.

When I first arrived at Gatwick late on Thursday night, there was an eerie, doomsday-like scene. Ordinarily, dozens of red landing-lights twinkle above the flightpath, yet apart from a lone police helicopter there was nothing in the inky black sky.

Some airlines had offered to pay for rooms at the cheapest bed and breakfast hostels, but – aptly for this time of year – there was no room at the inn.

Nor were there vacancies at the South Terminal’s only hotel, the BLOC. Doubtless knowing there would be sufficient desperately tired passengers to fill all its 245 rooms, costing up to £149 a night, the management did not even see fit to reduce their prices.

The first family I met, sitting in the draughty tunnel leading into the terminal, were Sahar Ghazzeli, 31, and her sons Ibraheem, seven, and Youseph, six, who were engrossed in computer games.

‘Usually I limit the time they spend on their tablets, but today I’m making an exception,’ said Miss Ghazzeli, who had given up hope of flying to Tunisia to spend the holiday with relatives, and was waiting for a taxi to take her home to Tunbridge Wells in Kent. ‘The boys have been very good, but we’ve been here since 7.30am – more than 14 hours – and it isn’t easy with little ones. When I told them the plane wasn’t going, the youngest one burst into tears. 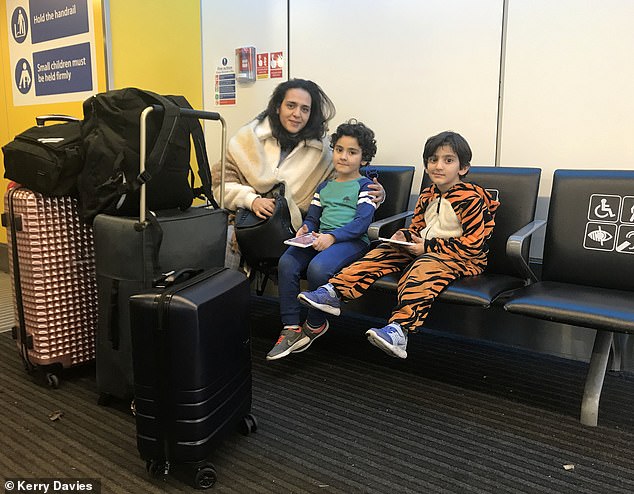 Sahar Ghazzelli with her sons Youseph, six, and Ibraaheem, seven, at Gatwick Airport last night. They have given up hope of flying to Tunisia to spend the holiday with relatives

‘The airport haven’t been helpful at all. No information. Nothing.

‘They just said they’d update us about the flight at 5.30pm.

‘Then when we went to the desk they said it had been cancelled. Everyone was angry, but nobody was going to do anything stupid.

‘But the woman on the desk seemed scared, and said she was going to call the police.’ Inside the terminal, during the small hours of Friday, the atmosphere was surreal.

Some parents seemed to have given up trying to rein in their children, who were racing around in the ‘family friendly’ wire trolleys. Others played chasing games, or slid across the speckled marble floor.

The overnight sleepers had commandeered every quiet corner, every seat, every nook and cranny, with places nearest the phone-charging plug connections at a premium.

One young woman named Lydia, from London, who was trying to make her way to West Africa with a group of friends, even slept in a wheelchair.

What would they do if they could get their hands on the so-called ‘drone wolf’ who was behind this tidal wave of human misery, I asked. ‘Strangle him,’ said one man, sprawled out on the floor. He wasn’t joking.

Another popular resting area was the chapel and prayer room, transformed into an ecumenical dormitory for exhausted passengers of many faiths.

Usually, there are plenty of empty seats at the annual carol service held there. This time, the Roman Catholic chaplain Binoy Thomas told me with a wry smile ‘there was standing room only’. It was another ironic little twist that lifted the misery and hardship of this contemporary Christmas tale.

What was the fate of the uncomplaining group who spent a sleepless night on those hard, plastic seats?

When last I heard from the Smurthwaites, they had checked in for their six-hour, Egypt-bound flight and seemed on course to meet their daughter, albeit almost two days late.

Mr Budden was also making his way towards the departure gate, his Lanzarote-bound flight having apparently been allocated a take-off slot.

As for the two septuagenarians, they were heading back home, but their tour operator has promised them a flight to Malta on Boxing Day.

So they would buy a last-minute turkey and a few trimmings and have a quiet Christmas together in Hertfordshire.

There would be no tree or decorations for them this year. No presents either.

Yet perhaps, when they look back on this fiasco, they will remember the friendship they developed with their fellow travellers, and reflect that they did receive a rather precious gift, after all, however unwanted it may have been.