A Belgian grandmother is trying to track down a former British soldier who was her forbidden first love from 50 years ago.

Josianne Van Craeyveld, 68, was a teen when she met handsome Peter Baker in a cafe in her hometown of Kortrijk.

He was a couple of years older and stationed with the British Army in a town called Emblem, near Antwerp.

They courted and on one day trip to the countryside Josianne snapped a photo of Peter which she kept for more than 50 years.

British soldier Peter Baker, the forbidden first love of Josianne Van Craeyveld, 68, who was a teen when she met handsome Peter Baker in a cafe in her hometown of Kortrijk, Belgium

When Peter returned to England they wrote each other letters which were translated for Josianne by a schoolboy friend.

But their brief romance ended when Josianne’s parents wrote to Peter telling him in no uncertain terms there could never be anything between a British Protestant and a Catholic girl.

Josianne went on to marry a local man, Henri Parmentier, and has been happily married to him for more than 50 years.

But she still wonders what happened to her first love Peter and her granddaughter Isabelle Bruneel has launched a social media campaign to try to find him. 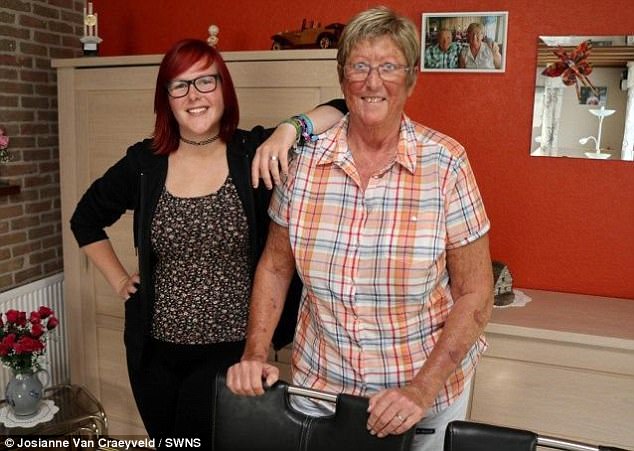 Forbidden love: Josianne van Craeyveld is in search of her missing British soldier Peter Baker. Pictured here with granddaughter Isabelle Bruneel who is searching for him on social media

Isabelle, from Ypres, said: ‘I was at my grandmother’s house going through old pictures and suddenly she found a picture of her very first great love.

‘It was a forbidden love. He was a Protestant and her mom obstructed the relationship.

‘They wrote letters to each other, translated by a boy from the neighbourhood. It’s such a beautiful but sad love story.’

Josianne said: ‘After almost 50 years, I’m still happy with my husband, but still want to know what happened to my Peter.

‘He was working with his battalion in the hamlet Emblem at Ranst, but had a night out in Kortrijk.

‘In the cafe under the town hall I fell in love with that Englishman. And it was mutual.’

Josianne said they only met a handful of times before Peter returned home, and over the next year they secretly sent each other love letters.

She added: ‘Through my neighbor, my parents Peter wrote a letter stating that there could never be anything between a British Protestant and a Catholic girl from the Westhoek.

‘They also forbade me to contact Peter and at that time you listened to your parents.’

She said she was reticent about telling her ‘sporty and sweet’ husband about her quest to find her lost lover.

Josianne said: ‘It was quite difficult to tell him that I was looking for my forbidden love with Isabelle.

‘First, he responded a little bit, but I made Henri clear that he did not have to fear anything.

‘He remains my husband, but I just want to know what happened to my Peter. He has occasionally come to my mind. ‘