The Belgium royal family led the country’s National Day celebrations as they arrived at a church service in Brussels today.

Queen Mathilde, 46, coordinated a red lace dress with a matching hat as she headed to the Sainte-Gudula cathedral.

The mother-of-four accessorised with a purse and belt in the same colour, while a pair of bright red leather gloves complimented the outfit perfectly. 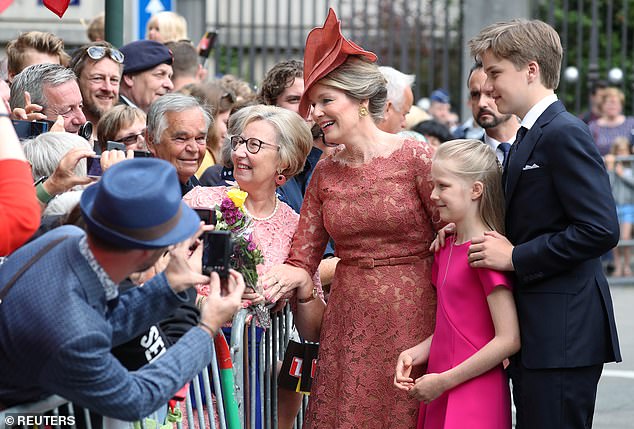 Queen Mathilde, Princess Eléonore, and Prince Gabriel stopped to speak to wekk-wishers and take some pictures 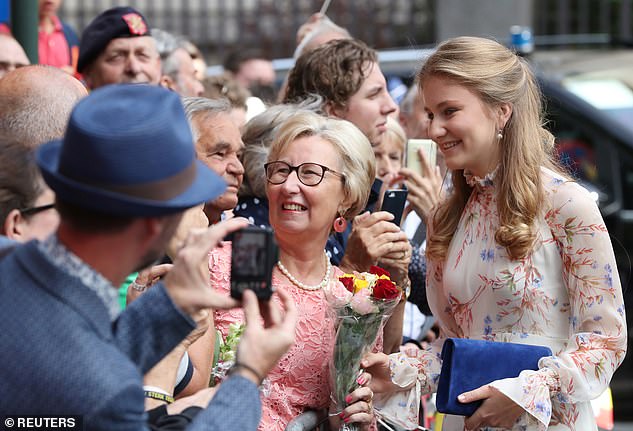 One royal fan did not shy away from taking a selfie with the young princess, who looked poised and graceful

She was joined by husband King Philippe, 59, and their four children, Princess Elizabeth, 17, Prince Gabriel, 15, Prince Emmanuel, 13 and Princess Eléonore, 11.

Looking as stylish as ever, Mathilde opted for heels in a shade lighter than her ensemble and wore her blonde hair in a neat up-to.

She kept her makeup natural with with just a dash of eyeliner to underline her blue eyes.

But she wasn’t the only one wearing her Sunday best as King Philippe, who is the commander in chief of the Belgian army, and has served in the forces before ascending to the throne, donned his smart navy army uniform.

The royal family looked straight ahead as they sat front row during the religious celebration known as The Deum.

The children, who quietly sat down on each of their parents’ side in the cathedral, appeared to be on their best behaviour during the ceremony. 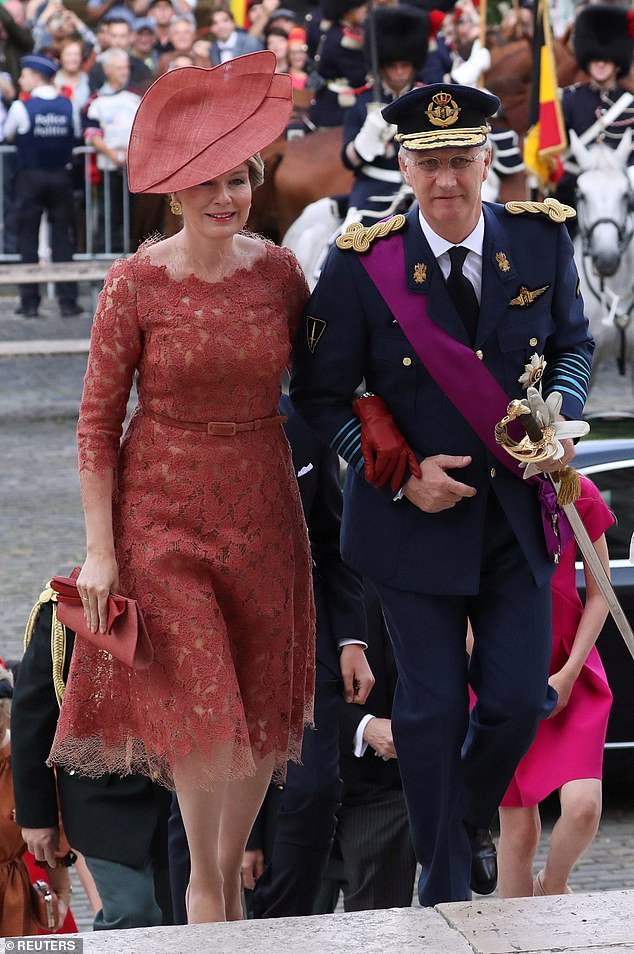 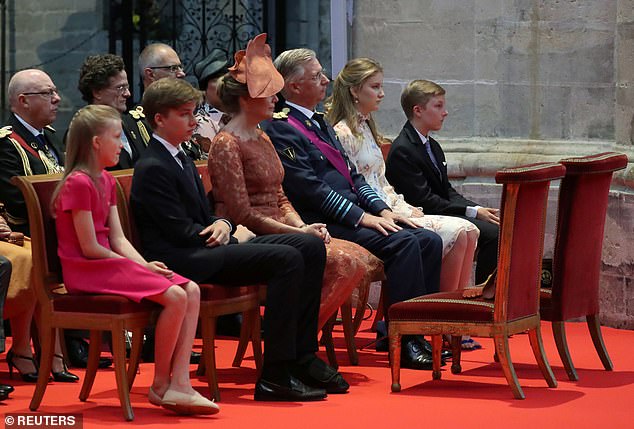 The Belgian royals were accompanied by their children as they sat front row during the religious celebration known as The Deum. Pictured from left to right: Princess Eléonore, 11, Prince Gabriel Gabriel, 15, Queen Mathilde, King Philippe, Princess Elizabeth, 17 and Prince Emmanuel, 13

The Belgian royals seemed in good spirits as they exited the cathedral, smiling and posing with well-wishers.

Belgium is a relatively young monarchy in Europe, with their first king, Leopold of Saxe-Cobourg, rising to the throne in 1831. 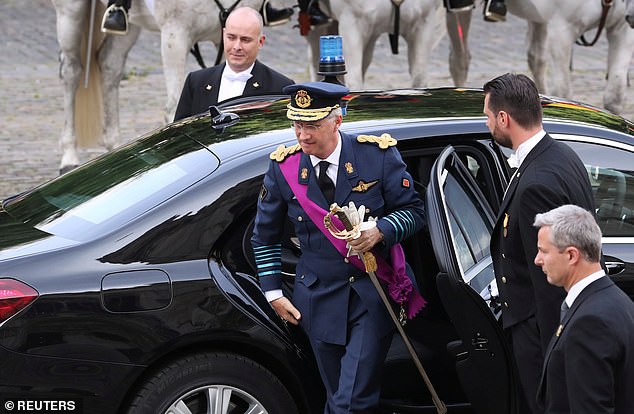 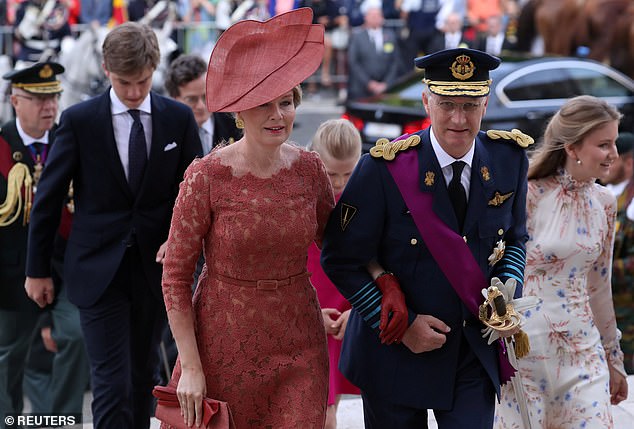 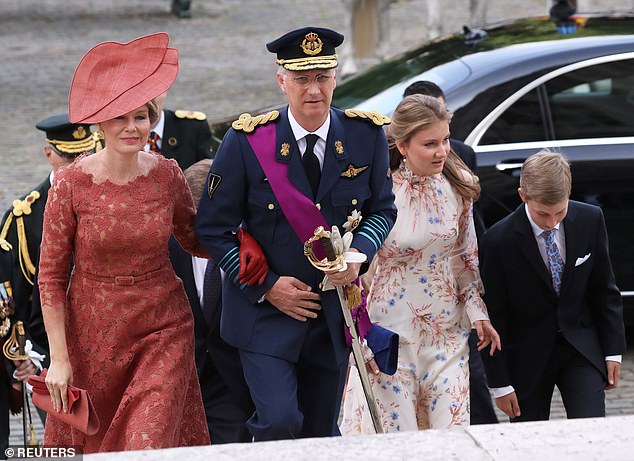 The royal family looked in good spirits as they made their way to the cathedral in their Sunday bests this morning. Pictured from left to right: Queen Mathilde, King Philippe, Princess Elizabeth, 17 and Prince Emmanuel, 13

Before then, the country was under the Netherlands’ rule, but inspired by the recent French Revolution of 1789, the Belgian people rebelled and booted the Dutch out of the country.

Leopold of Saxe-Cobourg was a nobleman with connections with the most prominent royal families of Europe – including with the British royal family, thanks to his marriage to Princess Charlotte of Wales, the only child of George IV, in 1816. 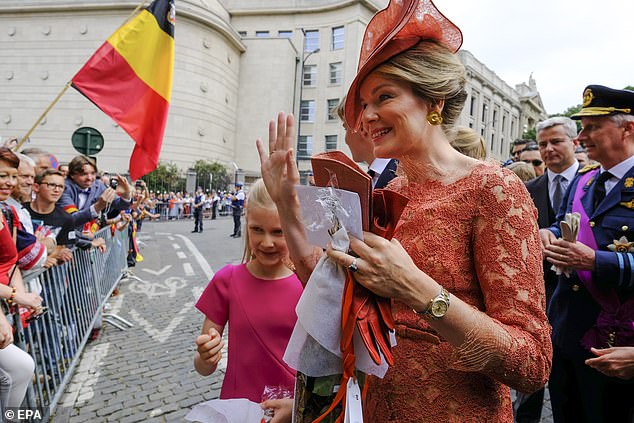 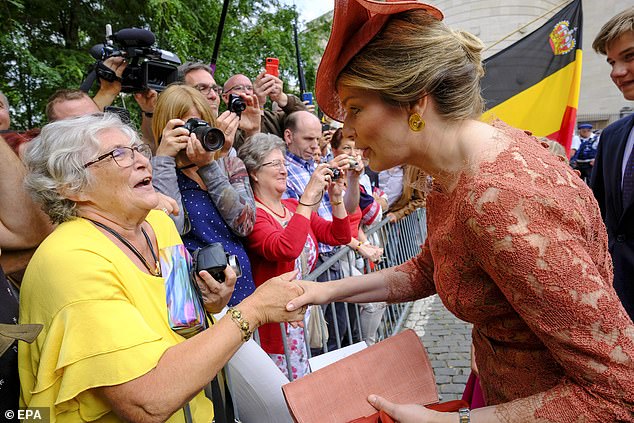 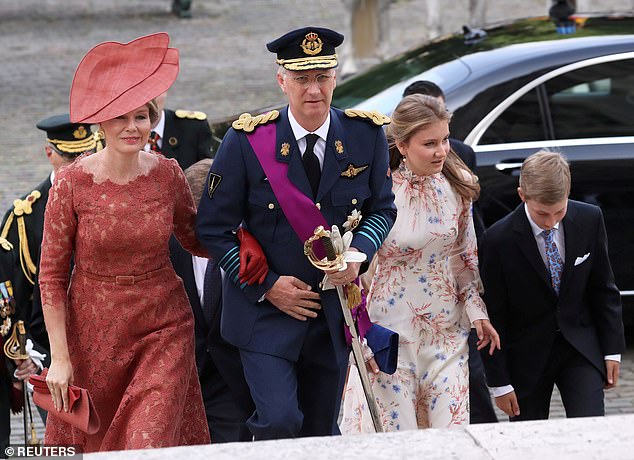 Princess Elizabeth, 17, and her younger brother Prince Emmanuel, quietly followed their parents into the church 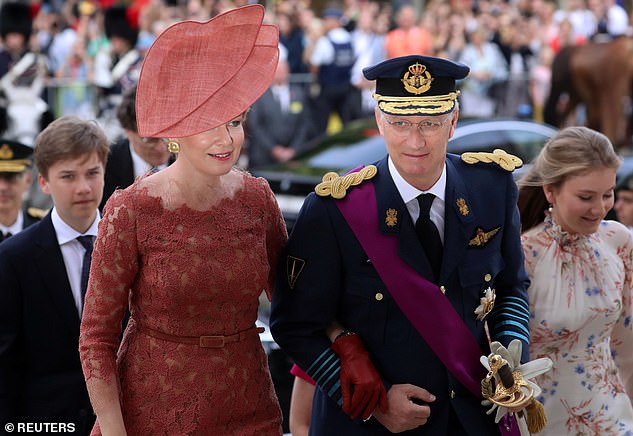 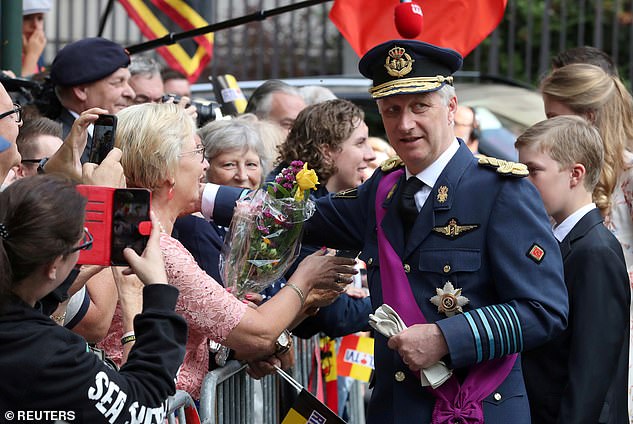 After the ceremony, King Philippe was greeted by well-wishers who handed flowers and gifts to him and his children 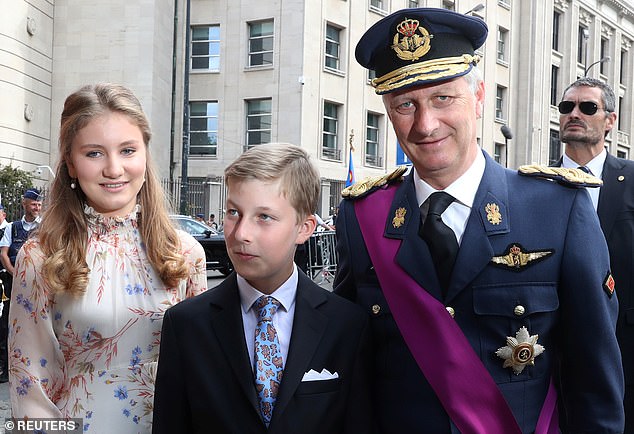 His ties with European royalty made him a perfect candidate to become King of Belgium under a parliamentary monarchy regime.

The celebration would initially take place on 27 September, the day marking the official withdrawal of Dutch forces from Belgian soil.

Crowds would informally celebrate the event each year, but it became an official public holiday thanks to a law dated from 27 May 1890. 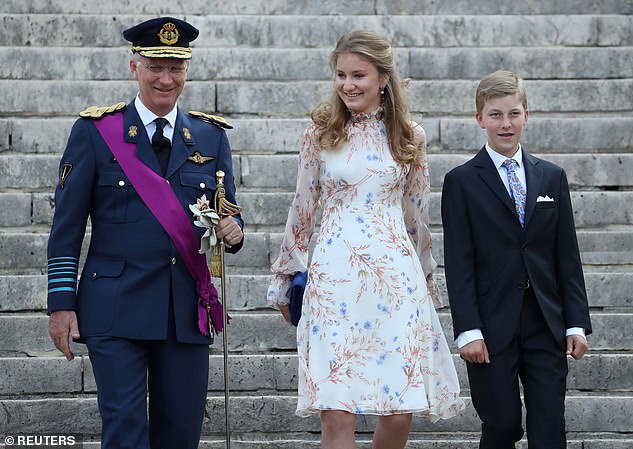 Sunday bests: While their father donned his navy army uniform, Princess Elizabeth wore a lovely dress with long sleeves and floral print and Prince Emmanuel looked dapper in his suit 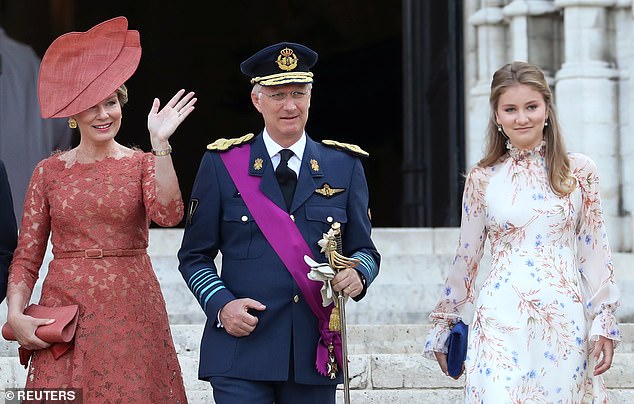 A wave for the people: Queen Mathilde seemed relaxed as the family exited the cathedral after the service 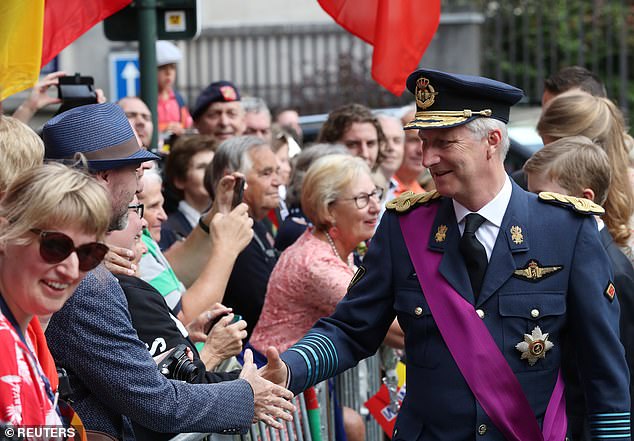 All smiles: King Philippe took time to shake the hand of one eager well-wisher following the church service 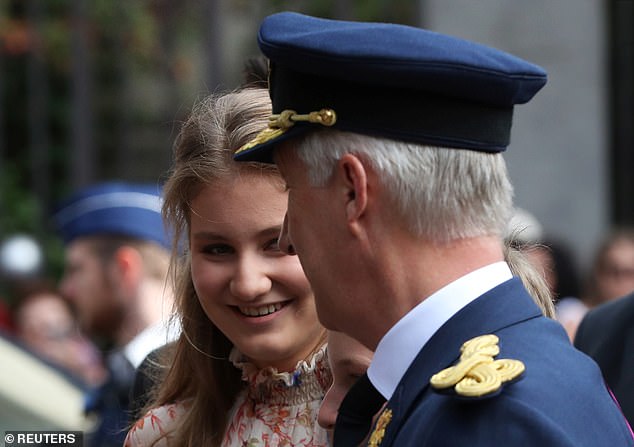