She helped open Milan Fashion Week on Wednesday evening, as she took to the runway in style for Alberta Ferretti’s star-studded SS18 presentation.

And Bella Hadid didn’t let the night end there, as she later put on a dazzling display when she attended a lavish party celebrating Serpenti Forever by Nicholas Kirkwood for Bvlgari in the picturesque Italian city.

The brunette beauty wowed as she arrived at the glitzy affair in a velvet black strapless dress, which featured a thigh-skimming side slit.

She teamed the simple yet chic number with a matching pair of vertiginous heels decorated with a criss-cross bejewelled design.

However, it was the California-born beauty’s accessories that proved to be the true centrepiece of the ensemble, with an emerald and diamond statement necklace illuminating her decolletage, while drop earrings added a sparkly frame to her face.

Wearing her raven tresses in a sleek updo, the coveted model enhanced her natural beauty with a dusting of makeup from the naturally-hued end of the palette. 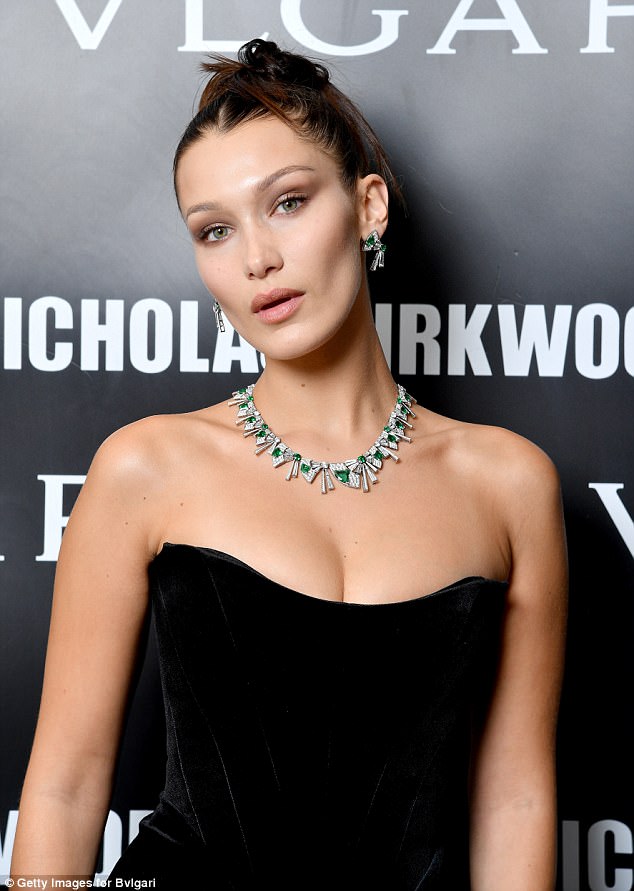 Sparkle: The 20-year-old model stepped out in an emerald and diamond statement necklace 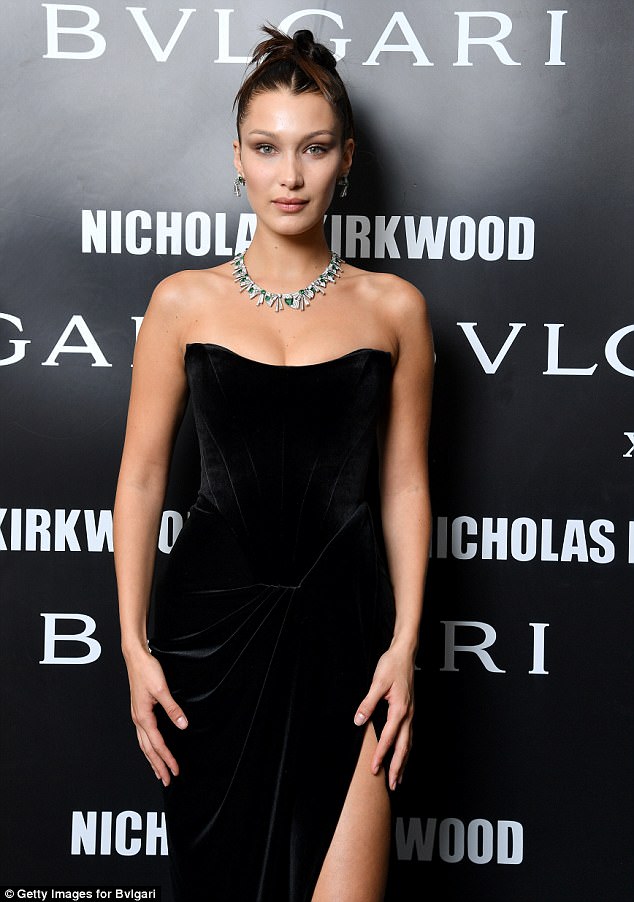 The thigh is the limit: The brunette beauty wowed as she arrived at the glitzy affair in a velvet black strapless dress, which featured a thigh-skimming side slit 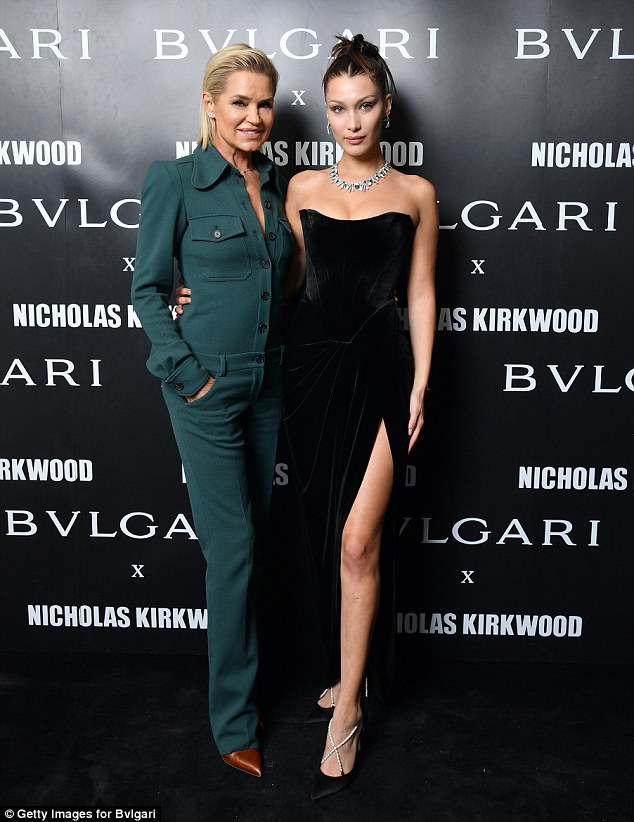 Hot mama: She was joined at the event by her mother Yolanda, who wore a green jumpsuit 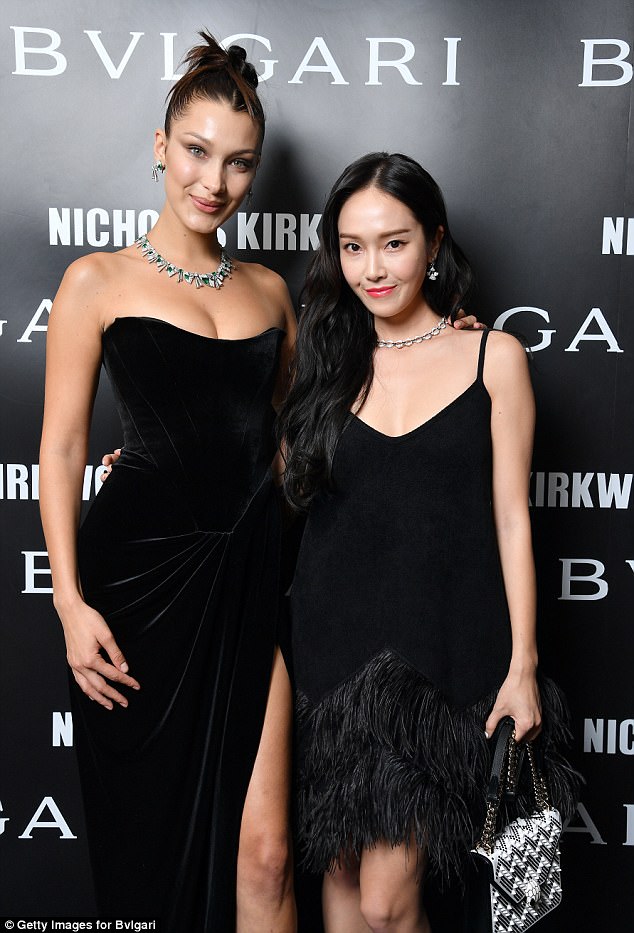 She was joined at the event by her 53-year-old mother Yolanda, who wowed as she arrived at the hot ticket event in a green jumpsuit.

Bella and her sister Gigi have been joined by their proud mother for much of their time at the international fashion weeks, which so far have hit New York City and London before Milan.

The proud mother-of-three, who is also mum to 18-year-old model son Anwar, has openly spoken of how she wouldn’t let her children enter the fashion industry until they she deemed them old enough. 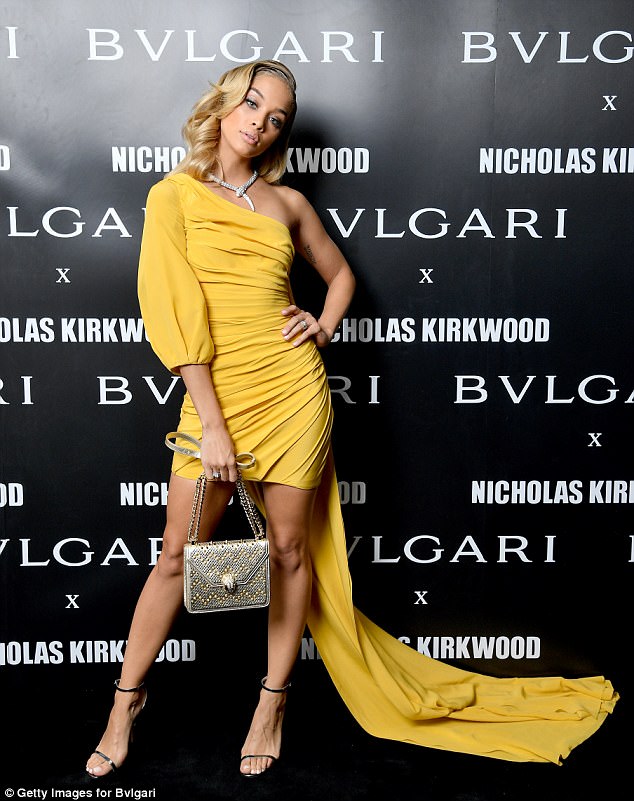 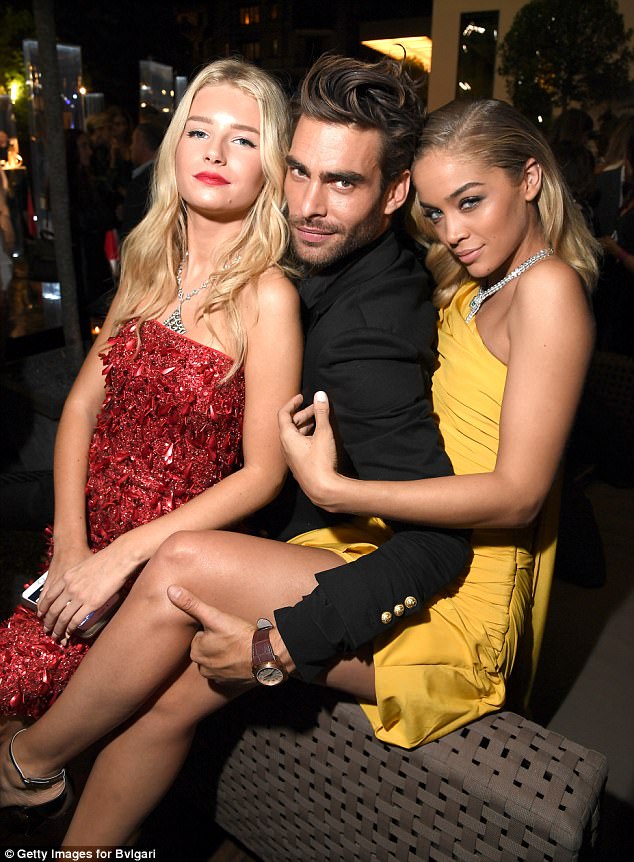 We like to party: Inside the bash, Jasmine posed for a shot with Lottie Moss and Jon Kortajarena

‘I never let them work [as models] before they were 18,’ she told ELLE.com. ‘I didn’t want anybody judging them on what they looked like.

‘I wanted them to feel and be the authentic human beings that they are and I think that created a lot of strength for them.’

She continued: ‘I always said to them, listen, there are thousands of girls that are much more beautiful than you girls, but you have an extraordinary character.

‘And you’re going to have to set yourself apart by being a role model by showing up on time and being kind to everybody… that’s how you can make a difference in the world.’ 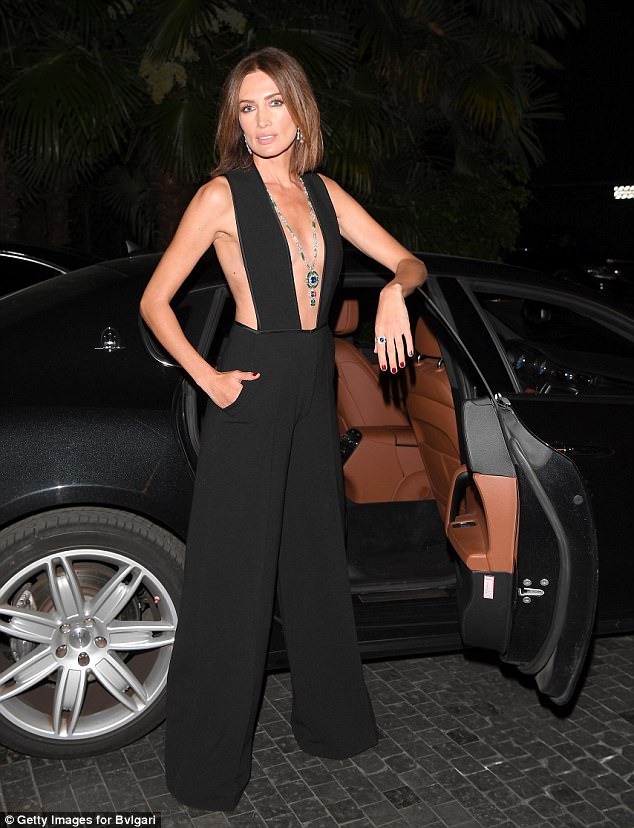 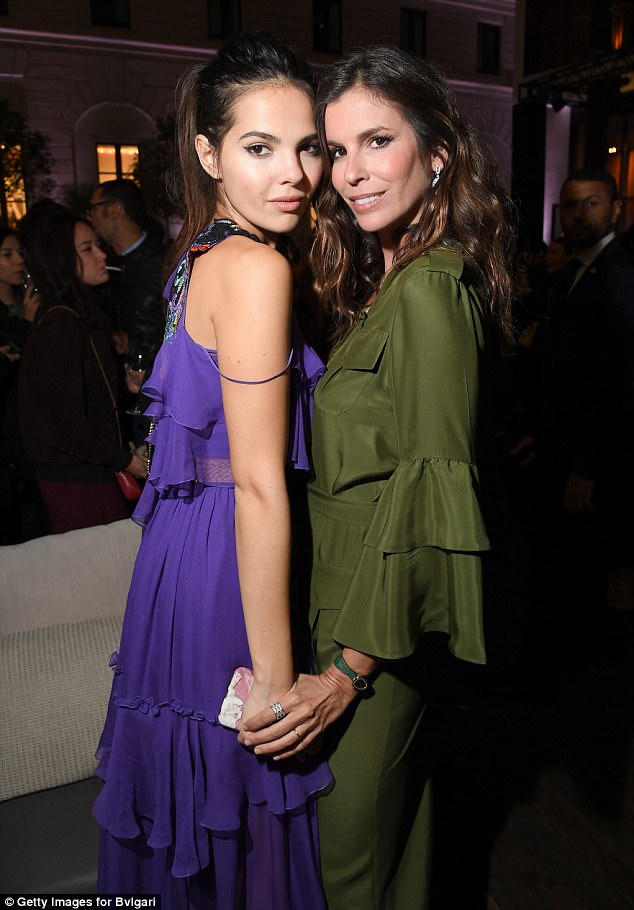 Evergreen: Christina Pitanguy, left, looked stylish in green as she posed for a snap with Doina 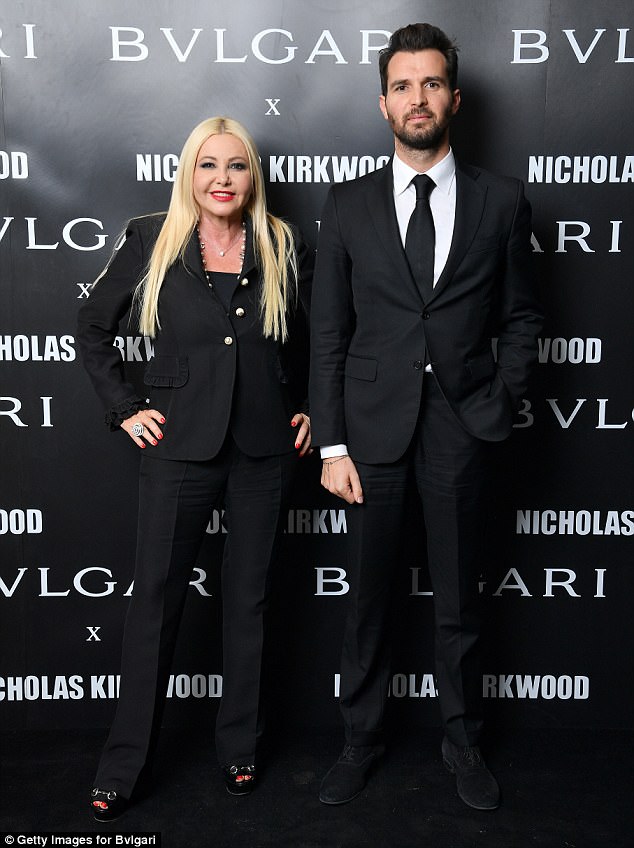 Black to basics: Monika Bacardi and Andrea Iervolino put on a sleek display in black suits 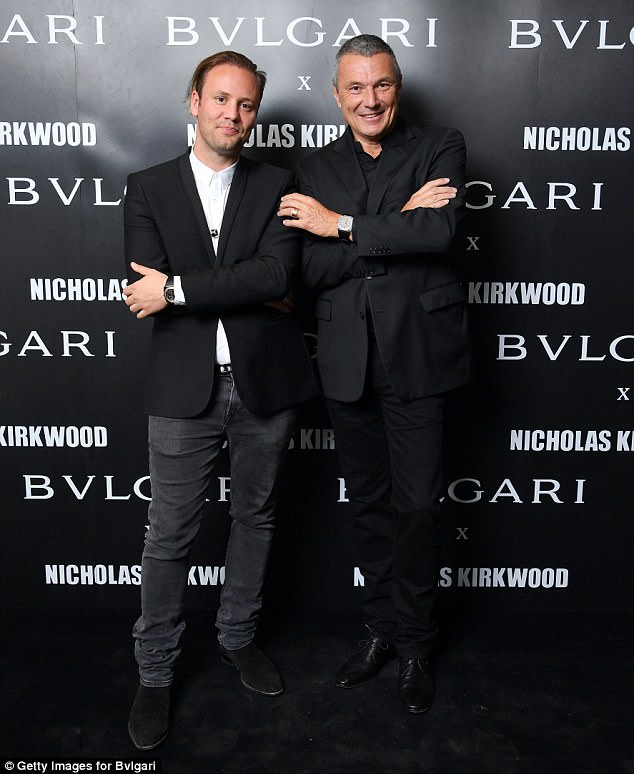 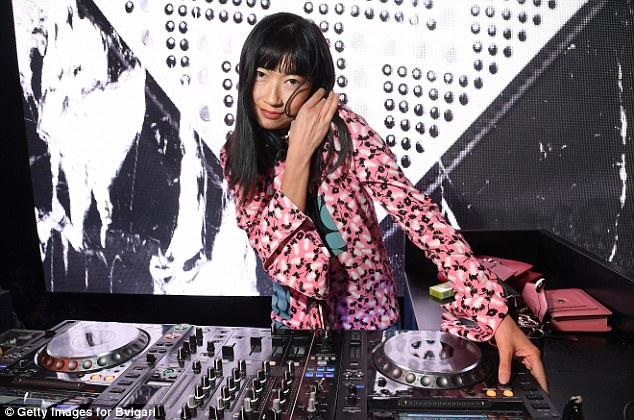 Music: Mimi Xu kept revellers entertained as she spun a selection of tunes on the night 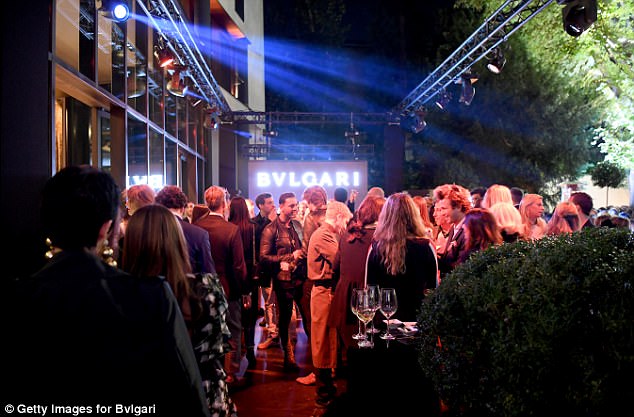 Just the beginning: The exclusive soiree was one of the first big events at Milan Fashion Week