Hailey Bieber and Bella Hadid put their curves on display in the latest ad for Victoria’s Secret.

Hailey, 25, rocked a sexy lace corset as she danced about while Bella, 25, dropped jaws in a jade green bra and thong underwear.

Hailey beamed jubilantly as she posed seductively for the camera while Bella played Pat-A-Cake with another lingerie-clad model.

Dropping jaws! Hailey Bieber and Bella Hadid put their curves on display in the latest ad for Victoria’s Secret

She showcased her defined abs as she played with her brunette hair.

The fun-filled epic was set to pop music and saw the models working an array of sexy bikinis and lingerie styles.

The ad is in promotion of Victoria’s Secret’s Very Sexy Push-up, which offers a medium lift.

Bella has recently returned to Victoria’s Secret as it attempts to rebrand as the VS Collective. 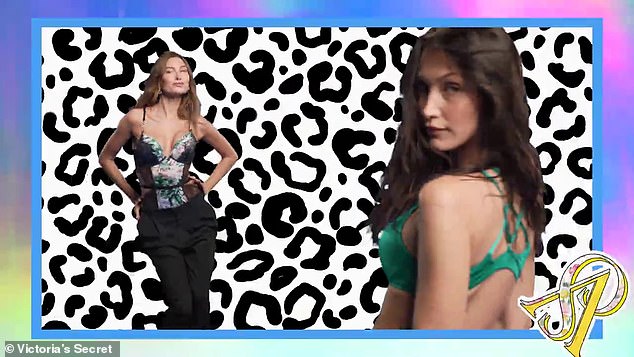 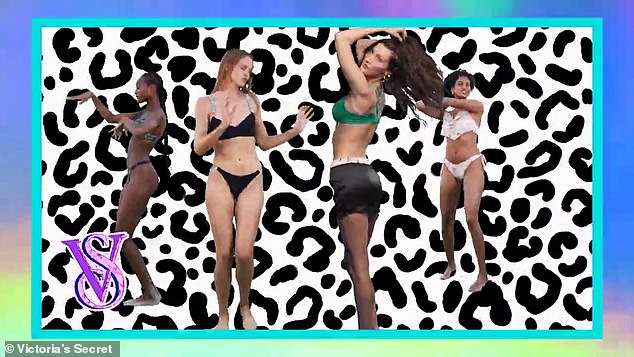 Leggy lady! Hadid put her statuesque body on display as she posed up a storm in the ad 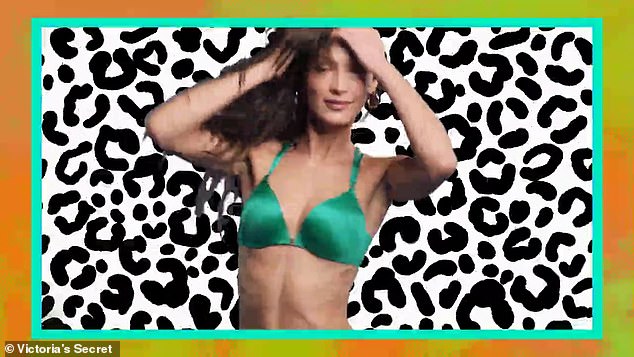 Making them green with envy! She wowed in a satin green bra

Over the past few years the firm was swamped with controversies including a raft of sexual misconduct claims such as that Bella was harassed.

‘What magnetized me to coming back was them coming to me and really proving to me that, behind the scenes, Victoria’s Secret has changed so drastically,’ the model insisted in an interview with Marie Claire published December 2021.

‘There was a type of way that, I think, a lot of us women who used to work with Victoria’s Secret felt. And now, six of the seven [VS] board members are all female. And there’s new photoshoot protocols that we have. So a lot has changed.’

A couple of years ago Bella intimated that she ‘never felt powerful’ during the three runway shows she walked for Victoria’s Secret. 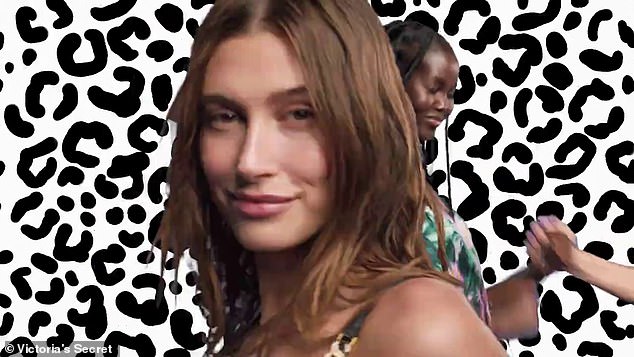 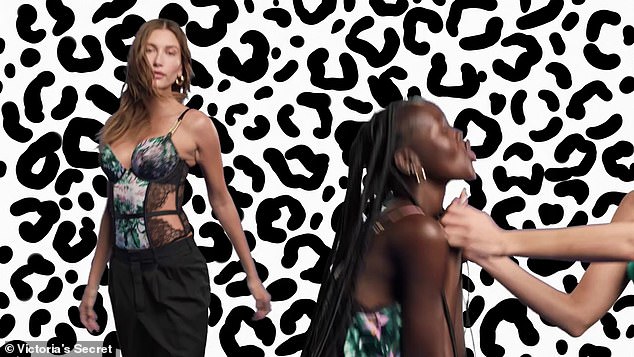 Very sexy indeed! The ad is in promotion of Victoria’s Secret’s Very Sexy Push-up, which offers a medium lift

She said that Rihanna’s Savage X Fenty show in September 2019 ‘was the first time on a runway that I felt really sexy,’ according to Women’s Wear Daily.

When Marie Claire brought up those remarks to Bella she responded that becoming part of the VS Collective ‘was really about taking my power back and having the power over my body be released to myself again.’

She said: ‘I think the beauty of what Victoria’s Secret is as a collective is about the conversation. All of us together, Paloma [Elsesser], Adut [Akech], when we sit on set, we’re just grateful for how we feel supported now, instead of how we used to feel, when it was a lingerie company that used to be run by men for men.’ 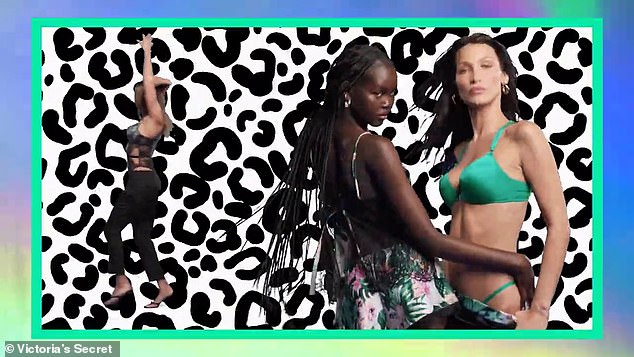 The little sister of Gigi Hadid confessed: ‘It took me almost a year and a half to take the meeting with them. Even having that conversation was very complicated for me because of the way that I had felt in the past.’

However she came around over the course of ‘multiple meetings’ where the brand was ‘able to prove to me’ that certain ‘protocols’ were put in place.

‘They have in our contracts that – which we, by the way, don’t have anywhere else. Not in editorial [shoots], not any other fashion shoots, so it’s incredible to see that a lingerie company had even thought about this – we don’t have to do anything, basically, that we don’t want to do,’ she said. 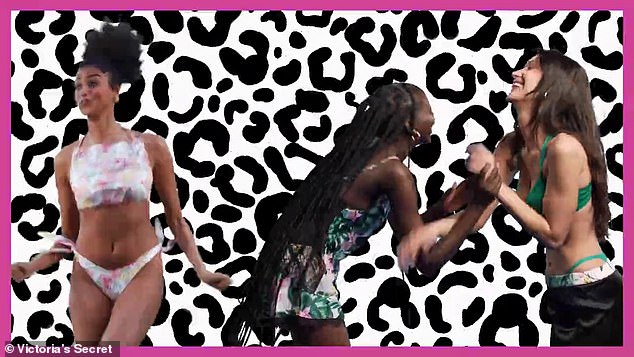 The new VS: The VS Collective is retooling itself to be more size inclusive after the original brand was denounced for promoting an unattainable body image

‘We don’t need to show parts of our body that we don’t want to show. That’s really important for us as women, because sometimes, going into these sets, we do lose our boundaries. And our boundaries are not accepted.’

Bella maintained that ‘I know firsthand how Victoria’s Secret used to make me feel, and now, going onto set every day, there is just an energy that’s switched.’ 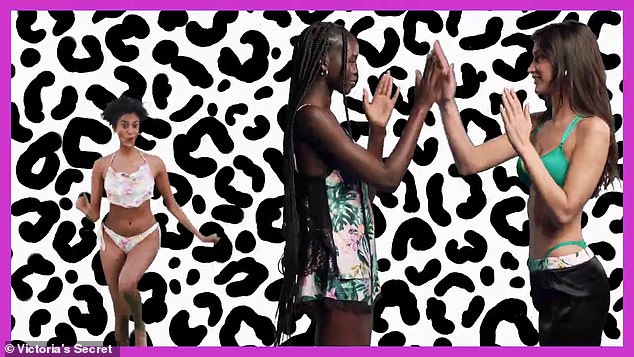 Fun and games! Bella played Pat-A-Cake with another lingerie-clad model

The VS Collective is retooling itself to be more size inclusive after the original brand was denounced for promoting an unattainable body image.

Early in her career Bella walked the Victoria’s Secret Fashion Show for its final three years – 2016 in Paris, 2017 in Shanghai and then 2018 in New York City.

In 2020 an explosive New York Times report detailed allegations against Victoria’s Secret executive Ed Razek, who had left the company the previous year.

Among the accusations was that Ed sexually harassed Bella during her fitting for the 2018 edition of the Victoria’s Secret Fashion Show. 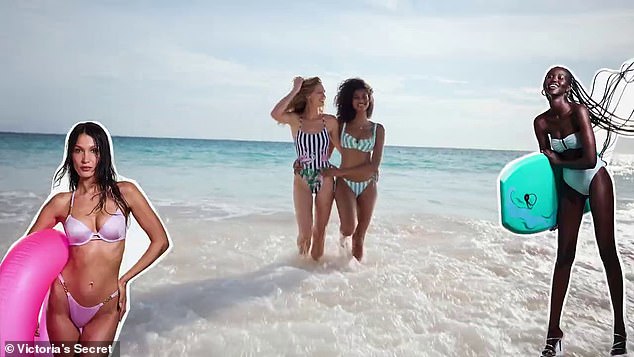 Girl power! The fun-filled epic was set to pop music and saw the models working an array of sexy bikinis and lingerie styles

Three eyewitnesses and one person who heard of the remark secondhand said that Ed ordered: ‘Forget the panties,’ as Bella was measured for underwear.

It was also claimed that Ed wondered aloud if Bella would be permitted to walk ‘down the runway with those perfect t*tties’ by ABC, which aired the show.

Three sources also alleged that Ed groped a model’s crotch through underwear at the same fitting where Bella had her measurements.

Ed, who resigned in August 2019, insisted: ‘The accusations in this reporting are categorically untrue, misconstrued or taken out of context.’ 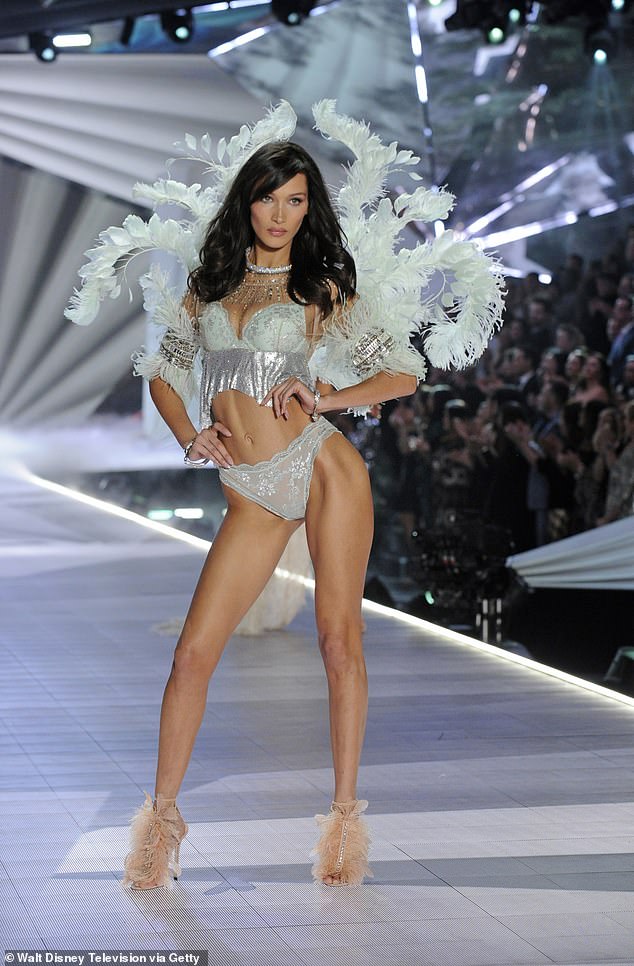 Making her return: Hadid has recently returned to Victoria’s Secret amid its efforts to rebrand as the VS Collective; pictured 2018

Another flashpoint of controversy was Les Wexner, then the CEO of Victoria’s Secret parent company L Brands, who was infamously friendly with Jeffrey Epstein.

About two years ago Les, who is now chairman emeritus of L Brands, said he was ’embarrassed’ about the Epstein connection.

‘We are all betrayed by friends. At the end the day, people have secret lives because…they’re so good at hiding those secrets,’ said Les, who has claimed that north of $46 million of his money was misappropriated by the late pedophile.

Les told investors the association ended in 2007, the year after the Epstein case was brought to a grand jury in Florida, according to CNBC. 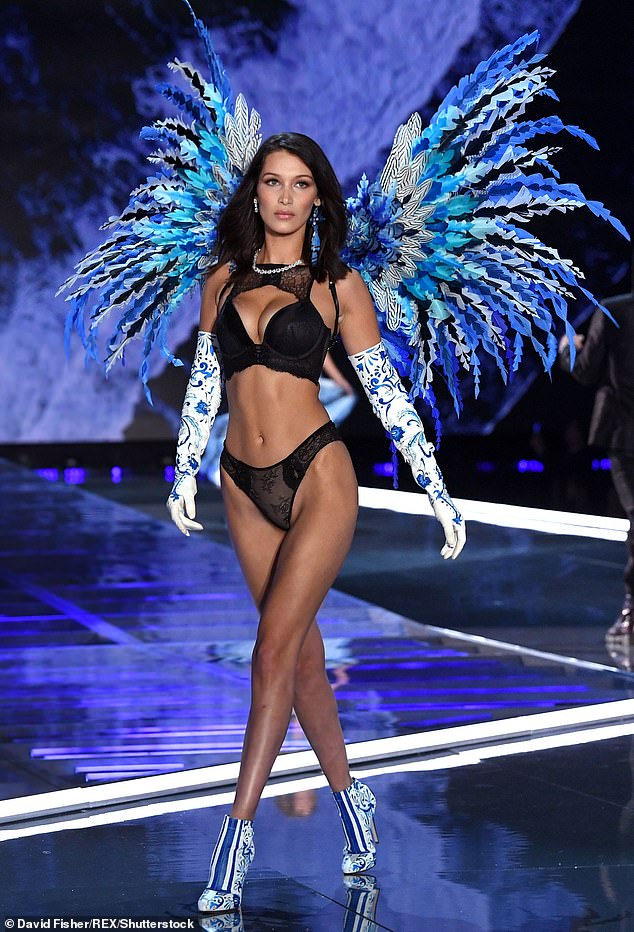