Bella Hadid and her best friend Hailey Baldwin have been having a wild time during their spring break in Miami.

The catwalk queens have been seen straddling each other on a lounge chair and also sharing a sweet kiss at dinner while enjoying all Florida has to offer.

And on Monday the Vogue supermodels were at it again as they pranced about poolside in their itty-bitty bikinis.

Ready to take a dive: Bella Hadid was back in a bikini on Monday afternoon as she sunbathed in Miami with her friends 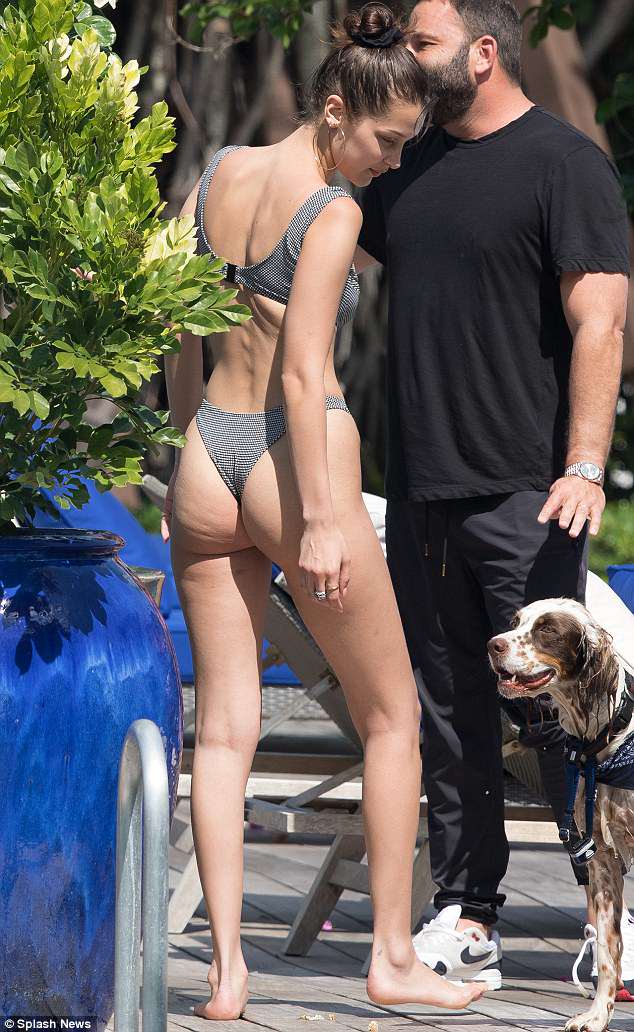 Her workouts have paid off: Bella looked ready for her centerfold as she made the most of a snazzy 1940s-style black-and-white bikini

Bella looked ready for her centerfold as she made the most of a snazzy 1950s-style black-and-white bikini.

The good pal of Kendall Jenner was seen pulling up her bikini briefs.

And when talking to a man who stood next to a cute dog, she displayed her toned backside. 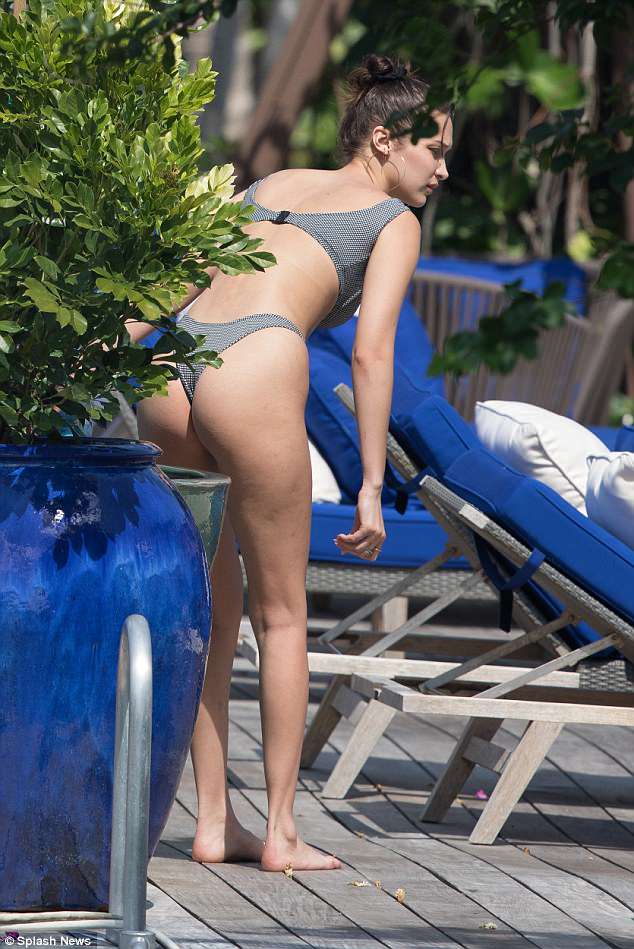 She has to stay in shape: Hadid is a spokesperson for Nike Cortese which means she must look toned at all times

Also there was her travel mate Hailey who looked like a 10 in a pretty white bikini.

It’s been quite the show for the women this week.

On Sunday the cover girls kissed and cuddled each other during a dinner date in an Instagram post shared by Planta South Beach. 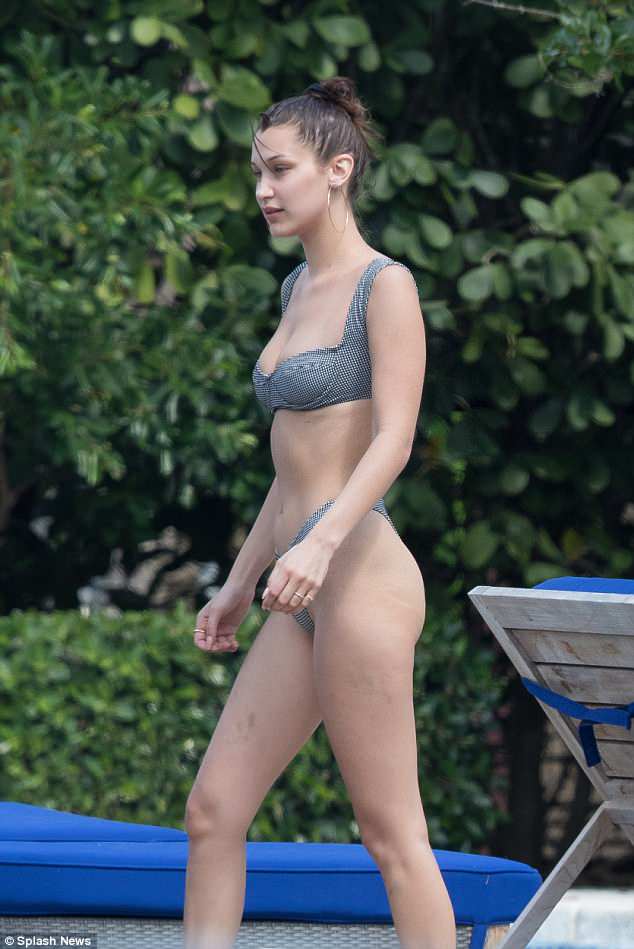 A body in motion: The looker has been snapping up campaign after campaign since she stopped being an equestrian and started modeling about three years ago 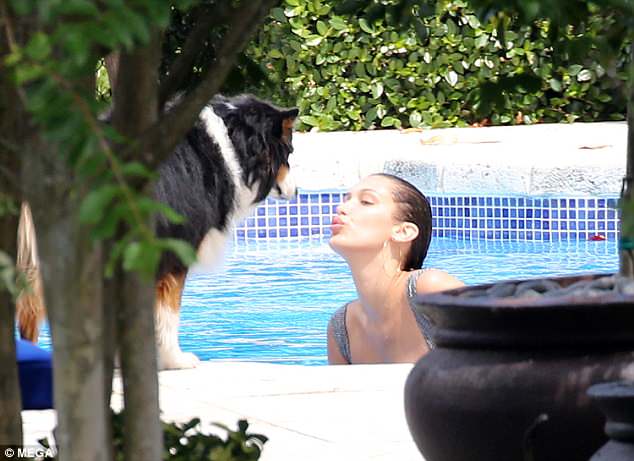 Something to bark about: This lucky pooch was about to get a kiss from one of the world’s most beautiful women

Hailey was puckered up and had her lips on Bella’s chin as she wrapped her toned, tanned arms around Gigi Hadid’s younger sister.

She had both hands on Bella’s right wrist as she flashed a diamond encrusted watch and two diamodn bands on her wedding finger.

The daughter of Stephen Baldwin looked straight in the camera.

Hadid was also puckered up but her eyes were closed as if she was in a state of bliss. 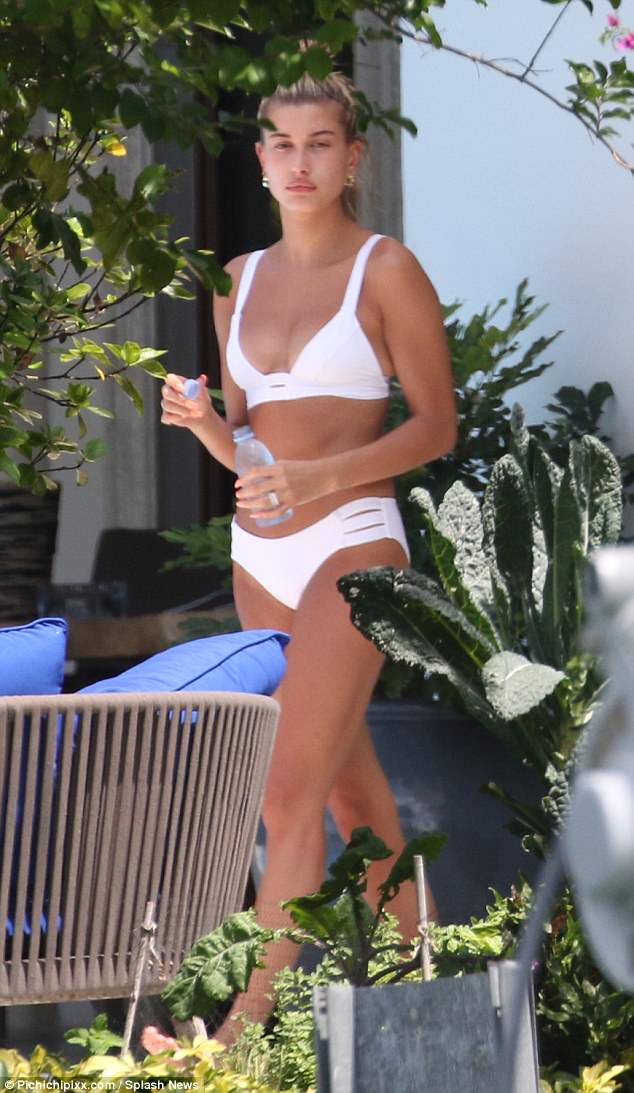 In perfect shape: Also there was her travel mate Hailey who looked like a 10 in a pretty white bikini

She clearly loved the attention as she modeled a plunging black top with bold gold hoop earrings.

The ladies were out to dinner and had chopsticks in front of them suggesting they were at a Chinese restaurant.

They were also seen in a Snapchat session.

Bella was in her nude colored bikini as she sat on the ground. Baldwin was next to her with a beige-and-white towel over her head. 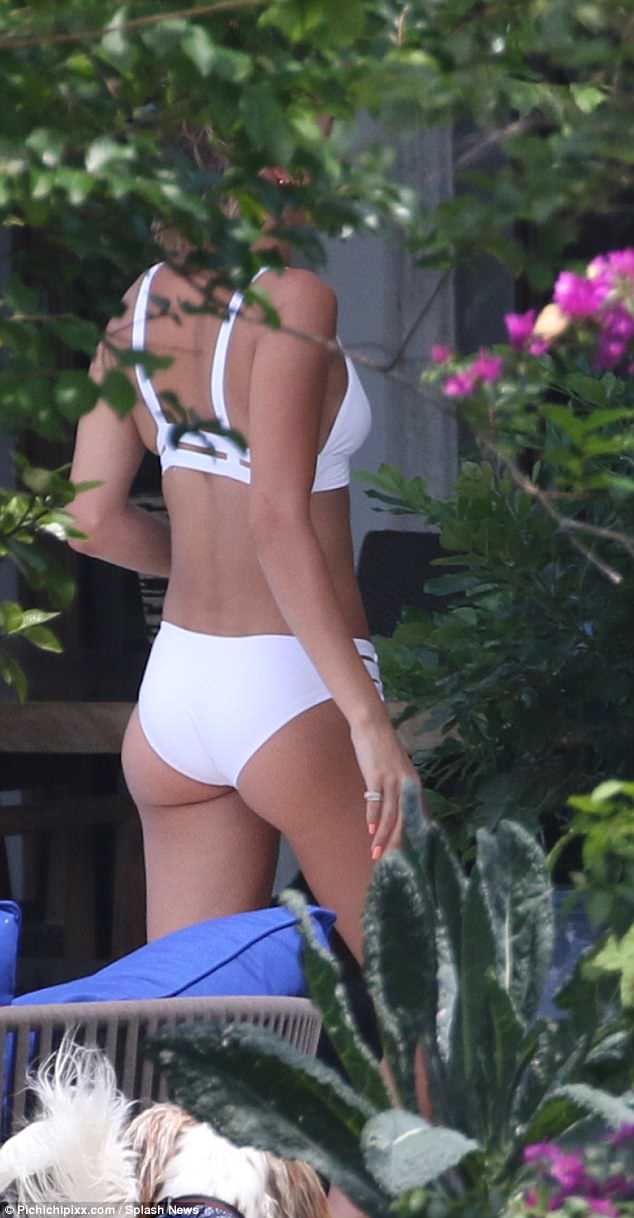 She added glam to her bikini slam: Baldwin wore gold earrings as well as a diamond ring on her pinkie finger

Hadid said in her caption, ‘This is Hailey.’

When straddling each other over the weekend, Baldwin, went for sporty and sexy in a navy blue bandeau and silver running shorts.

She walked over to Hadid, who was laid out in the sun wearing a nude bikini which let almost all of her full chest tan.

Hovering over Bella for a second, the statuesque blonde then tapped her friend’s leg before situating herself in the IMG model’s lap. 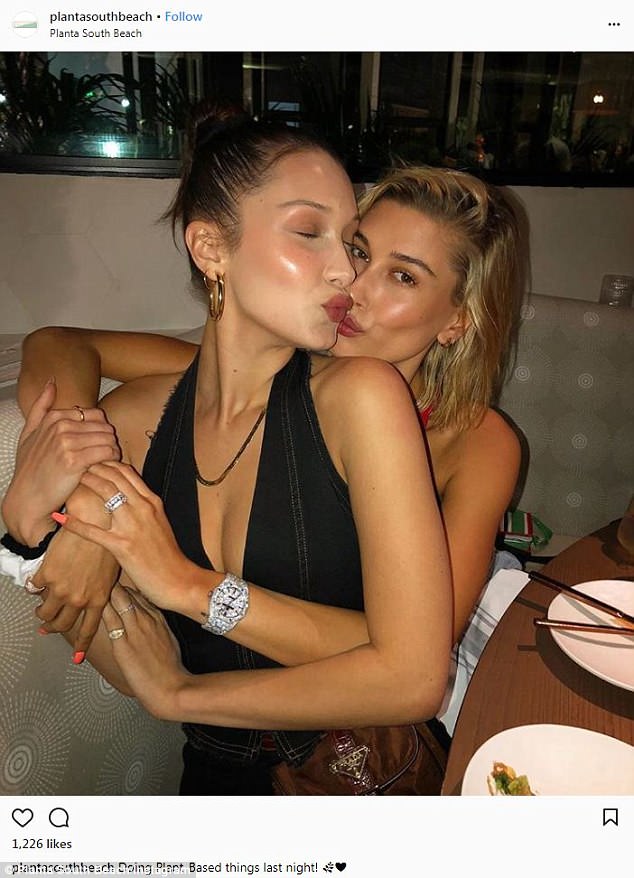 More affection: The ladies kissed and cuddled each other during a dinner date in an Instagram post shared by Planta South Beach on Sunday

The Arizona-born beauty’s hair appeared slightly wet, as if she was still drying off from an earlier dip in the pool.

Below her, Bella smiled and sat up a bit to adjust herself.

A white scrunchie held her hair up in a perky ponytail as the ex-girlfriend of The Weeknd threw her head back in glee.

Both ladies had on shades to suit their own styles, with Bella rocking round 90s-chic frames while Hailey wore rectangular designer rims. 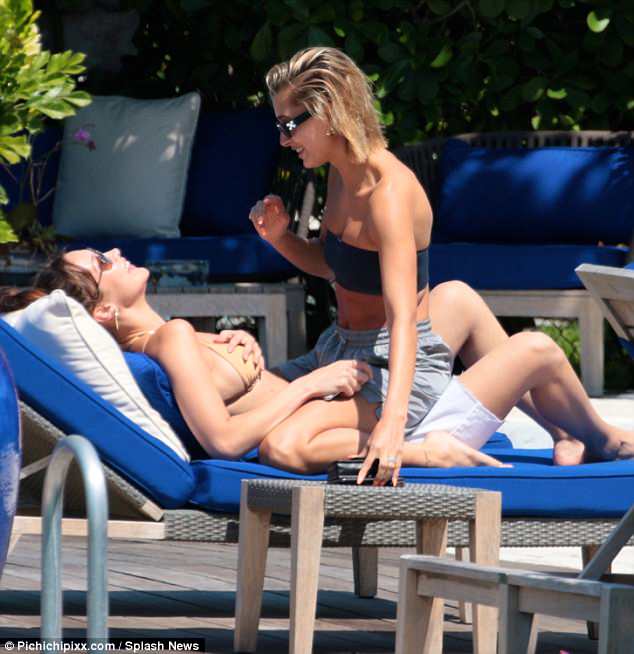 Fun in the sun! The mannequins put on quite the provocative display together in Miami Sunday, where the blonde beauty, 21, climbed on top of her friend to straddle her while poolside

They took their sultry display to the water next, heading to the docks for a bit of speedboat fun with pal Justine Skye.

Hailey, who’s rumored to be dating singer Shawn Medes, showed off her amazing abs as she hopped into the watercraft.

Justine, who is also close to the Jenners, looked cool in a tie dye shirt and beachy purple tresses. 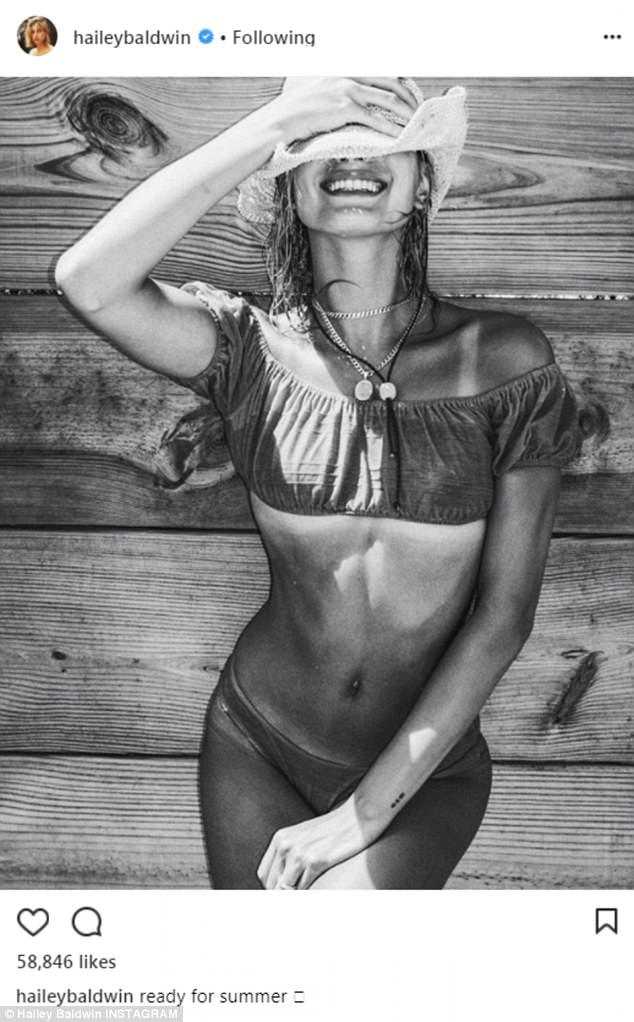 Summer time! Hailey flaunted her Summer body in a black and white shot captioned: ‘Ready for summer’ on Sunday night

Meanwhile, Bella offered up an eyeful in a pair of white shorts unbuttoned to reveal a string bikini worn high on her hips.

Hadid carried a stack of disposable cups aboard, making it clear there was a party ahead.

Then, she reached over to grab several bottles of rose from a friend on the dock, offering a look at her gym-toned bicep.

After getting all of the essentials on board,Hadid ditched her pants to expose almost all of her bottom in a tiny thong.

Noticing she had an audience, the beauty posed and pouted while the boat motored off into the distance.