Bella Thorne isn’t letting a little snowstorm get in the way of her bold fashion choices.

The 20-year-old wore two skimpy outfits while on a press tour of New York on Wednesday, despite freezing conditions.

She began the day in open-toe platform heels, a sheer corset and light-weight pant suit.

And later she changed into an even crazier look; a T-shirt with fishnet tights and lace front booties.

She did put on a red trimmed coat in an effort to minimize the chill just a little.

The big chill! Bella Thorne didn’t let a snowstorm get in the way of her bold fashion choices on Wednesday; she stepped out in high-heel booties and fishnets (left) after starting off the day in peep-toe platforms and a sheer corset 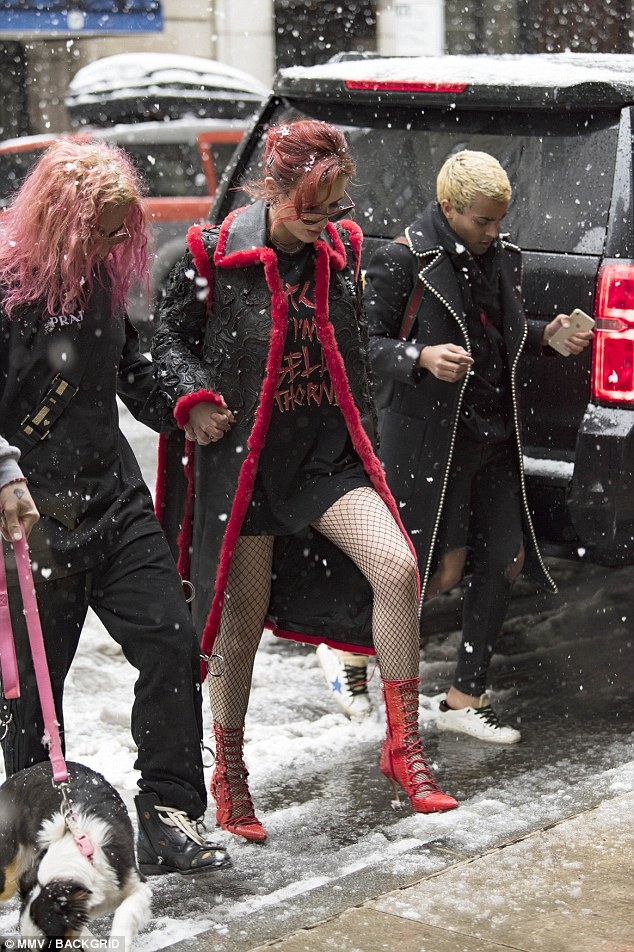 Slippery! Her boyfriend Mod Sun was on hand to help her navigate the icy conditions while wearing stiletto boots 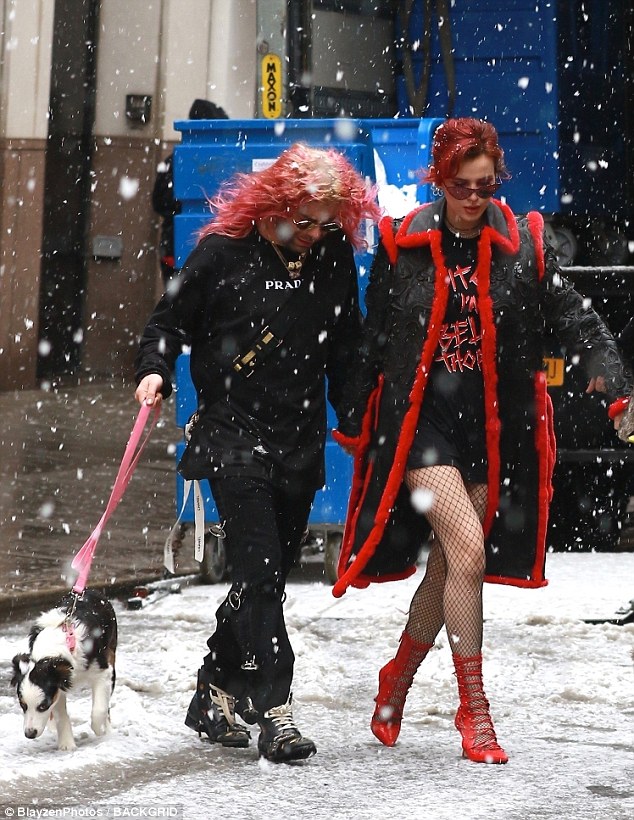 She was joined by her rapper beau Mod Sun who at least opted for sensible footwear and weather appropriate attire.

The actress is busy promoting her latest film Midnight Sun, in which she stars opposite Patrick Schwarzenegger.

The new movie charts the story of Katie (Thorne), who lives a sheltered life due to a life-threatening sensitivity to sunlight.

Charlie (Schwarzeneger) begins to meet her for nighttime adventures and the couple become faced with whether Katie can live a normal life. 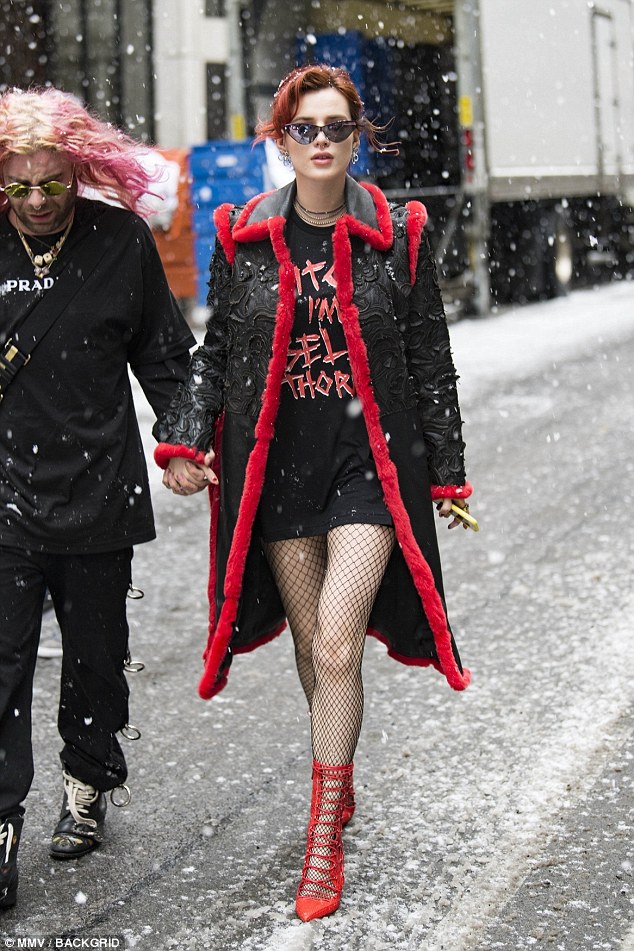 Who needs pants? The actress wore just a T-shirt but did wear a jacket at least

Bella revealed recently that her boyfriend has made her more positive, and has ‘changed so much of [her] mindset’ because his outlook on life is a lot more optimistic than her own.

She said: ‘Meeting someone that’s just so happy, you know that’s kind of his whole thing, and for me [as] someone who’s a little bit glass half empty, it really is nice for me to have someone on my back that’s like, ‘No, it’s good, it’s good, it’s good,’ even when it’s bad. 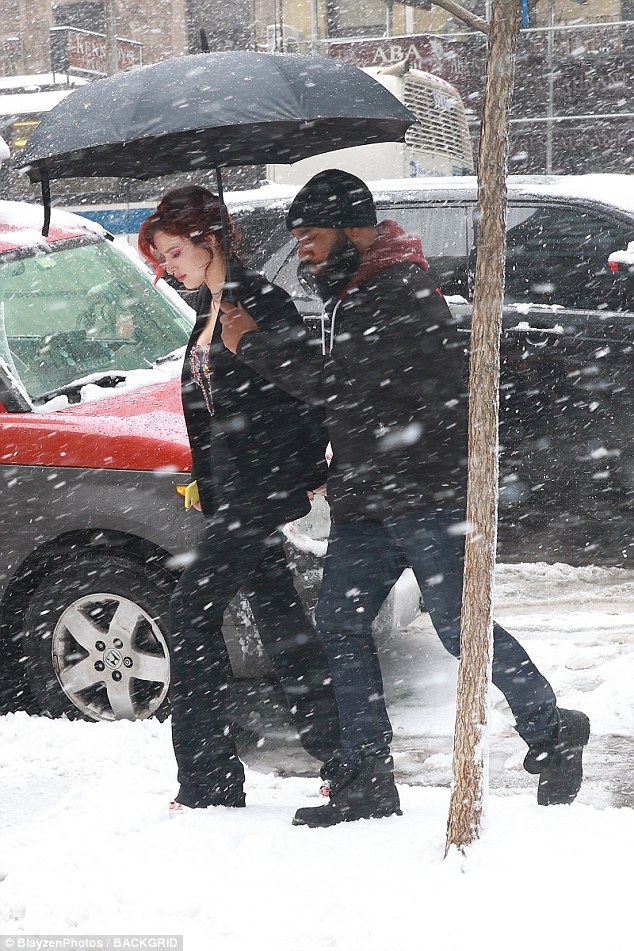 Gimme shelter: She did get a little shelter from an umbrella held by a helpful driver during her morning outing

‘[But now] when I see me going toward the negative I’m like ,’Bella, go toward the positive.’

The Blended actress also admitted she finds it ‘hurtful’ when people make assumptions about her because of the way she dresses.

She told ‘Entertainment Tonight’: ‘I think the most hurtful [thing is] when people look at you and they’re like, ‘Oh, [you’re] dressing a certain way. You have to be covered up or else you’re a sl*t of some sort,’ or whatever they want to call you. Whatever demeaning term they think fits you best.’

In January, Thorne added her voice to the growing Time’s Up movement when she took to Instagram to reveal that she’d been the victim of sexual abuse as a child.

In January, Bella claimed she had been a victim of sexual abuse when she was younger and she admitted her past experiences have made her take the misconceptions about her ‘a little bit more to heart.’

She added: ‘If someone says, like, ‘Why do you dress that way? Is it because something that happened when you were younger?’ And you’re like, ‘Oh, maybe it actually is. Hmm, that’s a good point.’ You know, it’s like kind of those small moments where you’re like ‘Oof, I wish that didn’t dig as deep as it did.’