Belle Gibson began praying at a Melbourne mosque more than a year ago, in an apparent confirmation she has converted to Islam.

Daily Mail Australia has been told there is a push to ban the cancer conwoman from attending prayers at Preston Mosque in Melbourne’s north.

Sources claimed Gibson began regularly attending prayers at the house of worship in late 2018 or early 2019 and pops in ‘now and then’.

But there are concerns among parishioners that the fraudster could prey upon ‘trusting, kindhearted’ members of the community.

A headscarf-wearing Belle Gibson garnered applause during an Ethiopian community meeting in Melbourne, above 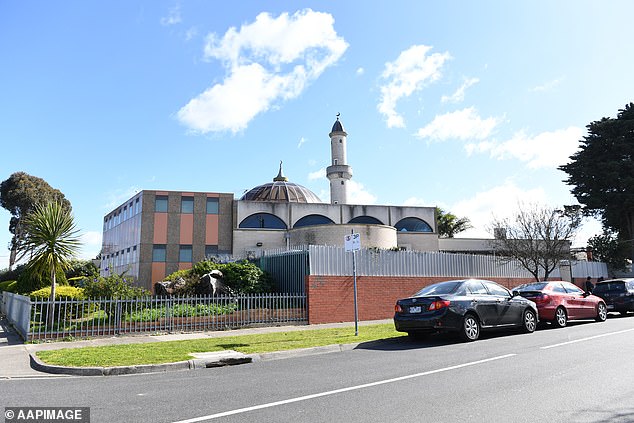 Sources claimed Gibson attended the mosque regularly in late 2018 and early 2019, but has only been seen ‘now and then’ recently, and since

At least one senior figure has spoken to Victoria Police about Gibson and some parishioners are demanding the mosque’s board to tell her she’s not welcome.

‘I couldn’t care less how much of a Muslim she is, she’s just a criminal and preys on vulnerable people,’ one source said.

Gibson has reportedly attended the mosque solely for prayers since before the Christchurch terrorist attacks. She hasn’t been seen there for several weeks.

Parishioners at the mosque became aware of Gibson’s identity in about the middle of last year.

WhatsApp messages were sent out informing teachers who hold classes at the mosque of her identity.

Wednesday, January 22, 2020: Daily Mail Australia reveals Belle Gibson’s home has been raided by the Victorian sheriff, with officers seeking to seize and sell her assets over $500k fine

Thursday, January 23: Video surfaces of Gibson speaking in the Afaan Oromo dialect, saying her name is ‘Sobantu’ and claiming she has been adopted by an Ethiopian ethnic group

Friday, January 24: Just how Gibson wormed her way into the Oromo community is revealed – with sources detailing how attended weddings, BBQs and meetings

Tuesday, January 28: Gibson is revealed to pray at a mosque in Preston, in Melbourne’s north

But opinion about what to do about Gibson’s attendance is split – given she is just another parishioner.

A source said some members of the congregation tend to be sympathetic to mosque-goers who have copped media flak.

Senior figures at the mosque want the board to make a decision about whether she is welcome or not.

Prominent Muslim Keysar Trad, of the Islamic Friendship Association, warned that mosques are not in the business of blocking ‘sinners’ from attending.

In his experience, people are only ever refused entry to a mosque if they interfere with its operations.

‘If they’re concerned she’s breaching some of the Islamic teachings, there are a lot of Muslims who don’t live up to all the teachings,’ Mr Trad said.

‘The mosque is in a sense a spiritual hospital. We don’t kick out the sinners, we give them another chance.’

A Preston Mosque spokesman was unavailable for comment.  Islamic Society of Victoria president Tarek Khodr did not return calls.

Victoria Police declined to comment on any advice given to the mosque. 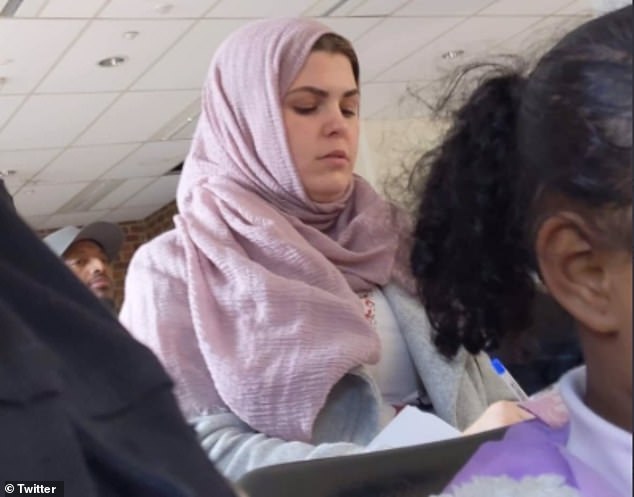 Gibson owes taxpayers more than $500,000 after the Federal Court found her guilty of misleading and deceptive conduct. She has not paid it back 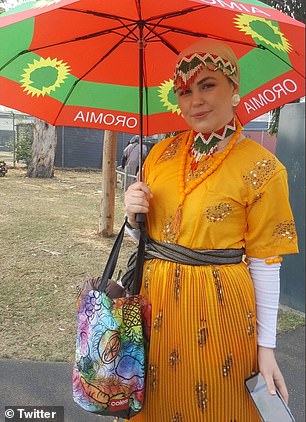 Gibson, left and right, at events for the Ethiopian Oromo disapora in Melbourne

Gibson owes taxpayers more than $500,000 after the Federal Court found her guilty of misleading and deceptive conduct.

She built her Whole Pantry business off the back of pretending to have cancer and curing it with food, and then fraudulently claimed to have donated profits to charity.

Gibson has not paid back her debt and sheriff’s officers last week executed a warrant on her home.

Meanwhile, video has emerged of Gibson declaring she has been ‘adopted’ by the Melbourne’s Ethiopian Oromo community.

In a clip filmed by Shabo Media, the fraudster spoke the African dialect, described Ethiopia as ‘home’, and gave her name as ‘Sobantu’.

Fresh video emerged on Tuesday appearing to show Gibson speaking about the ‘importance’ of raising money for the Oromo ethnic group.

Gibson was seen wearing a headscarf, referring to herself by the name ‘Sobantu’ and describing Ethiopia as ‘home’ in an interview filmed last October.

In a newly unearthed clip from the community meeting, Gibson speaks at length about Ethiopian politics and the ‘importance’ of raising money.

‘Raising money is important because it will go far for Jawa, for our kiro, for our jasa, for our families, yeah?’ she says.

Consumer Affairs Victoria was prompted to issue a warning about fundraising activities following a separate clip of Gibson last week.

‘We would encourage any organisation which uses volunteers for fundraising activities to consider their suitability for the role,’ a spokeswoman said.